Every time I look in the mirror, the scars are a reminder.

I have been struggling with them; the scars.  I think they are ugly.  I joke it off by saying that I look like an assistant in a magic act that went horribly awry, but really I feel freakish and disfigured.

But I think it’s less about the way I look and more about the things they make me remember.

I’ve been remembering stuff the last few days.  Some of it innocuous, like the weird buffeting of the wind coming through the open window of the cab as I rode to the hospital.  Some of it oddly specific, like the deep magenta scrubs the nurses were wearing in the operating room.

Some of it isn’t fun.  I remember waking up briefly the night of the surgery.  Red is what I remember.  It was as if I was looking through a gauzy red drape.  I wanted to move; to reach up and push it off my face but it was as if someone was sitting on my chest, pinning down my arms.  I know now that this was the ventilator tube down my throat and the paralytics they gave me to keep me from struggling against it (too late, it turned out).

When you have a portion of your stomach and esophagus removed and the remains sewn back together, they have to make sure that everything is holding together the way it should.  Having things leak in there would not be good.  So to check this they wheeled me to a room with a big machine that sort of looked like a giant industrial tanning bed.  They had to move me from the gurney I was on into the tanning bed, which I remember hurt in ways that I had never hurt before, and then the bed started tilting until I was effectively in a standing position.  I had to drink a small cup of blue dye – shocking, bright blue.  It tasted like battery acid – or a least what I would expect battery acid to taste like. The machine whirred and thunked as it took pictures of the dye going down what was left of my esophagus as we all crossed out fingers that the pictures wouldn’t show my insides looking like a bright blue water wiggle.  Apparently it was fine.

I’m pretty sure that was Sunday.  It was not long afterward that things were going downhill, with severe abdominal pain, a high fever, and so on.  I remember being in a hallway and Dr. Frenchy came up and said “We’re going to take you back into surgery.”  In retrospect I probably should’ve been concerned about this but I wasn’t.  I was too far out of it at that point and I merely did my best approximation of a shrug and off we went.

Just in case you are new to this particular bit of the story, it turns out that at some point I had pulled on the feeding tube that was sewn into my intestine and sticking out of the left side of my abdomen.  It tore the intestine and waste was flowing into my abdomen.  I had developed sepsis – a severe infection – and if it had continued for much longer I would’ve died.

I remember being in the ICU after the second surgery.  There was a guy in the next room that was “altered” and in distress, or at least he thought he was.  He was calling out “Nurse… nurse… help… nurse… help me…”  This went on for hours.  The nurses would go in an check on him and find nothing wrong and then leave.  And he would start again almost immediately.  “Nurse…. nurse…”

I lost track of the days but at some point they moved me from one ICU room to a different one in a different part of the hospital. I’m sure they told me the reason but I don’t remember why.  All I really remember is that it seemed like they were taking me to a different county and that every time the bed hit a bump, it would send shockwaves up through my body that were like electricity.

They had me do a second session in the tanning bed for reasons that I don’t quite remember.  I do know that when they were getting ready to move me from the gurney to the machine I said, “Um, no, we’re going to do this my way.”  I had them stand the tanning bed up and then I basically sat up and stepped into it.  It hurt less.  Not by much, but less.  It still tasted like battery acid.

Even after all this time and distance I don’t want to talk much about the hallucinations. Brought on by the massive amounts of painkillers they had me on, and the fever most likely, they were vivid, impossibly real, and usually like something out of a horror movie. I’ll share one to give you a flavor… at some point I felt sharp pain in my feet and legs.  I know now this wasn’t real because I had an epidural and was effectively numb from the chest down, but it seemed real at the time.  I raised my head and looked down and where the lower half of my body should be was machinery – metal gears and cogs and pistons, all gnashing together like a meat grinder, literally chewing up my legs.

Believe it or not that was one of the less disturbing ones.

Those 13 days in the hospital still haunt me.  I know I should simply put it behind me and be grateful that I survived, but it’s not as easy as all that.  Especially not today.

If you haven’t listened to Pink’s latest album “The Truth About Love” you really should.  It’s an amazing blend of pop/rock sass and deeply personal, painfully honest songs about love, friendship, and humanity.  One of the songs, “Time Bomb,” has the following lyric:

“I don’t want to be flawless
When I go, I want the cuts to show” 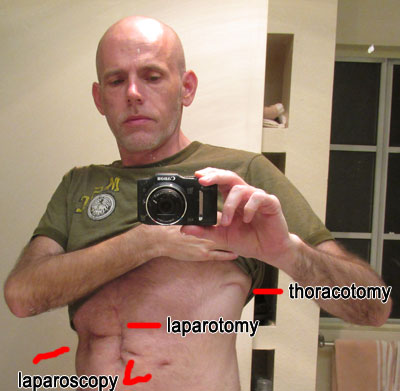