Arrgh! Only a couple of weeks into my project and I’m already behind. That’s what a week in Las Vegas for work (and a little bit of fun) will do to you.

So, with that in mind, I have decided that my next $50 for 50 by 50 is going to be for a Las Vegas organization, The Neon Museum. Here’s more about it from my site Vegas4Visitors.com:

For decades the Young Electric Sign Company (YESCO) has been creating the majority of the amazing neon artwork – yes I called it artwork – that has adorned the fronts of the hotels and casinos in Las Vegas. Actually it goes way beyond that – the neon signs on gas stations, motels, convenience stores, and just about everything else in this city have mostly been done by YESCO.

But as The Strip has marched relentlessly forward toward a more sanitized, upscale, corporate image, the neon signs that adorned the fronts of the casinos have fallen by the wayside, viewed by many as tacky and antiquated. Whether they were replaced by one of those gigantic pseudo-TV screens (yeah, those aren’t tacky) as a hotel remodeled or removed just before the implosion, neon has faded on Las Vegas Boulevard.

Since YESCO technically owns the signs (they are leased to the hotels), they offered refuge to many of the former glories, creating what was colloquially known as the Neon Boneyard. This big fenced off lot located near their main facility was where classic neon artwork was left to fade and rot in the unrelenting Nevada sun. The signs represented the last bits of the colorful history that Las Vegas has swept away in the name of modernity.

And there they probably would’ve stayed if it hadn’t been for the efforts of The Neon Museum, a not-for-profit organization that rescued the signs in conjunction with YESCO and set out on an ambitious project to restore them and/or preserve their unique place in Vegas’ history.

For the last several years, the Neon Museum has consisted of a few restored signs along and adjacent to The Fremont Street Experience in Downtown Vegas plus a relocated Boneyard that offered limited tours. Now, a permanent, open-to-the-general-public facility is up and running and it offers an amazing glimpse into Las Vegas’ past.

I’m a big of Vegas history so supporting this effort to preserve such an important part of it is a no-brainer. 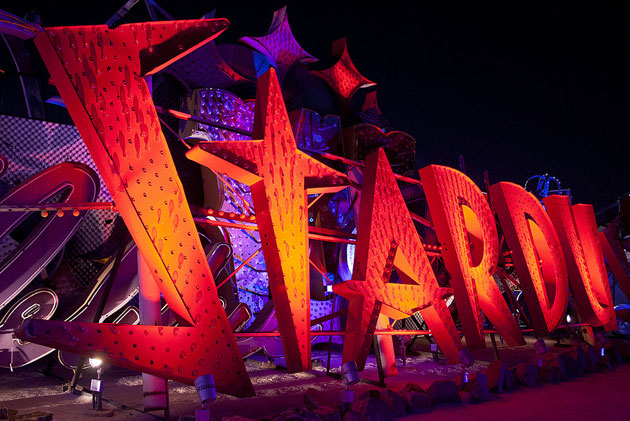