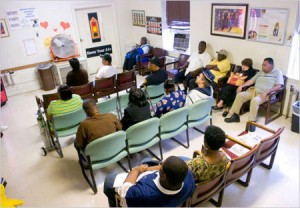 I’ve only been dealing with this whole cancer hooha for about a month now and I can already count nearly a dozen different waiting rooms:

So what would I want in a waiting room?  Comfortable chairs, number one.  They don’t need to be barcaloungers (although that would be nice), but comfortable padding on both the seat and the arms and, most importantly, enough spacing between them so that you don’t feel like you are right on top of the person next to you.  Light is important and I know that windows aren’t always an option architecturally but at least go for something other than harsh fluorescents.  Nobody looks good in fluorescent lighting.  Plants are fine but make them real and keep them healthy.  Artwork – keep it simple yet colorful and evocative.  If it were up to me I’d go for photography  – cityscapes and landscapes – identifiable landmarks that will make the people in the room think, “I need to get better so I can go there.”  A TV is fine, but please do not have it tuned to the news or those stupid health network things.  Reruns of the Golden Girls and Designing Women – that’s TV comfort food.  And forget the silly magazines unless you are committed to keeping them current.  Last, but not least, a solid, public WiFi signal.  The bulk of people in waiting rooms want to look at their phone or tablet while they are waiting, so let them!