Hey, Where Did That Giant Cheeseburger Come From?

Except for some flashes here and there, pretty much everything during my six day stay in the ICU is lost to the haze of pain and self-administered morphine in which I was enveloped.  Apparently people came to visit me and brought me presents but I remember mostly nothing about it.

Case in point: my friend Steve stopped by on Sunday, two days after the surgery, before the second surgery.  He brought me a CD case shaped like a giant cheeseburger and some Mardi Gras beads, all of which were tied in some meaningful way to his late wife and my late best friend Mary.  Apparently we had a full conversation (well, as full as I could manage), I was relatively lucid, and a good time was had by all.

I remember none of this.

What’s even weirder is that I didn’t question where the giant cheeseburger came from.  It was just there – a part of my recovery just like the self-administered morphine. 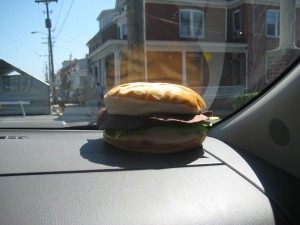 A gift from the Hamburg, PA Hamburg-er Festival

So therein lays your opportunity.  If you feel the need to claim some sort of sick friend credit you don’t deserve, just tell me you came to visit while I was in the ICU.  I’ll have very little choice other than to just believe you.

In other news, today is my birthday.  46 to be exact.  Not exactly the way I would’ve liked to be spending it but I suppose the alternative is not much better.

Things are kind of in the blah zone right now in terms of the recovery.

Friday and Saturday there was a fear that both the tube site and an incision next to it were infected.  The home care nurse came in on Saturday to look and change dressings and decided to call the doctor.  His determination was to have the nurse go ahead and remove nearly all of my surgical staples.  That would 16 in all, minus those holding the thoracotomy scar together and the 4 that were missed because they were under a bandage.

To say that this hurt is an understatement of epic proportions but it was more of the dying of a million little cuts type of pain than the type of pain I’ve been in previously during all of this.  I made noise, cursed a bit, and said “ow” a lot but it got done.

There was a lot of… well, let’s just say “stuff”… that came out of the wound near the tube and from around the tube itself and that continues to today.  Less, but still there.  Happy birthday!

I’m also having some weird numbness and aching type pain in my chest near the breastbone.  This seems to be mostly related to where they had some drainage tubes and as long as I keep in a relatively stretched out position and keep breathing fairly deeply (still a bit of challenge) it’s not debilitating.

What is more than a bit of a bummer, as it has been from the very beginning, is my new relationship (so far) with food.  I’m still on a soft diet, which basically means I eat normal-ish food but the soft varieties of it.  Yogurt for breakfast; apple sauce for a mid-morning snack; some oven roasted deli style turkey (maybe in half-a-sandwich fashion) and some soup for lunch; an Ensure like shake in the afternoon; and something like a light pasta or some ground turkey and mashed potatoes for dinner.  The problem is that my body does not like food – at all.  I eat and within a few minutes I start to feel bloated and distended.  Everything bypasses my stomach and my upper intestine and just sits down in my lower where it tries to get processed.

Basically I eat and then I feel like shit for the next 30-45 minutes and then it’s okay-ish again.  This will hopefully get less severe as my innards heal but it is probably going to be a factor moving forward to some degree or another.  Again, I say, Happy Birthday!

The outward result of the surgery and food issues is a pretty radical change in my appearance.  I have lost more than 30 pounds in just over 2 weeks and, at least in my eyes, appear downright gaunt especially in the face.  I don’t recommend this is a weight-loss strategy but it is a very effective one.

Other than that, I just continue to be very, very tired all the time.  Yesterday I managed to take a walk down the block and back and then went with my Dad to the grocery store.  Afterward I needed a nap.  Unfortunately sleep is not coming easy or lasting long so there is an exhaustion factor that I just can’t shake.

But I think that every day is at least microscopically better in some way or another so hopefully this will continue.  Those who know me well know that patience is not a strong suit so I am having a hard time accepting that everything is not back to “normal” after a little more than 2 weeks post major surgery.  I’m not saying I was thinking I’d be ready to go out drinking and carousing on my 46th birthday but I did, at least, hope that I’d be able to digest apple sauce.  Oh well… maybe next year.