On the evening of September 11, 2001 I decided I had gotten my fill of the horror show repeating in an endless loop on every channel on the TV and needed a drink, damn it.  I couldn’t bear the thought of West Hollywood – I rarely can – and many of my regular haunts weren’t open so I decided to go to this little hole-in-the-wall in Silver Lake called Cuffs. 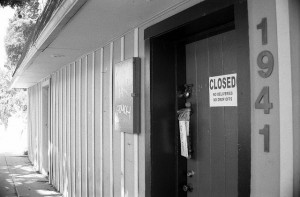 Stolen from flickr. If you own this and want me to remove it you are way too overprotective of stupid shit like this but okay, I will.

When I say little hole-in-the-wall I mean that almost literally.  It was built into the side of a hill and was tiny – about the size of an overgrown two-car garage, which I think the building may have actually been at some point in its life.  Inside there was enough room for a bar that could only have stools on one side of it, a couple of pinball machines, a couple of video game machines, and two single stall bathrooms.  Legal occupancy couldn’t have been more than 50 people although they were known to often cram more people in there than that, especially during their notorious after-hours where lewd and lascivious behavior was routinely ignored (and perhaps even encouraged) by the staff.  Not that I ever took part in that kind of immoral and illegal activity, of course.  I would never!  Shocked!  I’m shocked!!

Anyway, that Tuesday night the place was the complete opposite of the after-hours debauchery with a handful of people all standing or sitting around lost in their own thoughts.  You could sort of see them replaying the day in their heads – every now and then someone would visibly wince or shake their head and then reach for their cocktail.

I got a beer and was playing pinball when “King of Pain” by The Police came on the soundtrack supplied by the CD player behind the bar.  It was a completely unnecessary dance remix version with the requisite pounding drum beat, over-synthesized embellishments, and looping lyrics.  As it built, the opening line repeated over and over…

I had that song in my head when I woke up yesterday.  It was actually there when I went to bed the night before, but it was stuck inside that weird little cul de sac in my brain that holds on to song snippets and won’t let go.

At least this song made sense in terms of why it was there in the first place.  Sometimes they are so random and weird that I can’t imagine how they crawled inside my head.  I’ve often theorized that I have some sort of version of that myth where you can pick up a radio station with your dental work; mine is often tuned to a 70s rock station apparently because I can explain no other way that a song by Creedence Clearwater Revival would be running around in my brain.  One time the song was so random that I didn’t even know the song name or even the lyrics; I had to call Mary’s husband Steve and hum it to him over the phone until he could identify it.

So anyway, there’s that song in my head and the opening line, “There’s a little black spot on the sun today…” and there I am, watching the news from Boston and once again thinking, “Yes, there is.”

The reason I had that song in my head?  Because there’s pain.  Upper right quadrant of the abdomen near the liver, you know, where the suspect lymph node was located.  It’s not bad, but it’s there most of the time; worse when I push on it, which I guess I shouldn’t do, but I was because it was as if I could control the level of it.  In that moment I thought, “I am the King of Pain.”  Hence the cul de sac loop.

Could be nothing; just more post surgery stuff, I’m sure.

“There’s a little black spot on the sun today…”