In order to understand what happened today I have to go back in time to look at a couple of snapshots from the past.

It was September 9, 2006 and my best friend Mary and I were on the last day of our inaugural Plucky Survivors See America road trip, a 2,500 mile journey that visited six states, went to the biggest ball of twine and the Britney Spears Museum, and saw me turn 40 in a depressing room with a suspicious stain on the wall in a Rodeway Inn in Hot Springs, Arkansas (just as I always dreamed it would happen).

We were winding our way to do a drive of the Gulf Coast of Mississippi back to New Orleans, one year after Hurricane Katrina, and this is what we saw…

This entire stretch along the Gulf, from Ocean Springs, through Biloxi and Gulfport, down to Long Beach, Bay St. Louis and Pass Christian (some 40 miles or so), was all but wiped off the map by Katrina’s fury. We were at a disadvantage; foolishly, we hadn’t seen it in its pre-storm glory, but we could imagine.

Along the north side of Hwy 90 stood glorious Southern mansions, some dating back to the 1800’s, set amongst mighty live oaks. So it’s the best of the South, the most beautiful a beautiful region has to offer. And on the south side was the wide, wide Gulf of Mexico with warm waters lapping at white sand beaches. We looked at this, and said “Well, who wouldn’t want to live here?”

And now? The beaches are still there, but on the north side of the street, a broken driveway, a column or two, a ruin, but mostly….nothing. Mile after mile after mile of nothing.

Our final official stop of the trip was at the Friendship Oak at the University of Southern Mississippi Gulf Coast campus. This live oak is 500 years old (it was a sapling when Columbus landed!), its trunk’s circumference is over 18 feet, and its branches spread out 156 feet.

Mary and I sat on a stone bench under the tree’s mighty limbs, the plaque at our feet reading: I am called the Friendship Oak.  Those who enter my shadow will remain friends through all their lifetime. 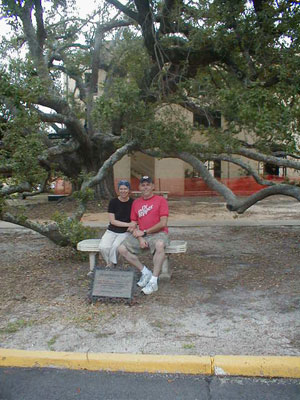 On September 3rd,  2010, I came to New Orleans for my birthday.  It was the first year that I wasn’t doing a Plucky Survivors road trip with Mary, but I took a drive anyway.  I wrote this…

That’s a mostly unremarkable occasion except for as it relates to many of the birthdays that came before it. I spent my 43rd birthday getting inked at the Baltimore Tattoo Museum. 42 came with a 250 mile journey into West Virginia to get a hotdog. My 41st I powered through nearly a pound of BBQ at Arthur Bryant’s in Kansas City. And of course 40 involved breaking into an abandoned dinosaur attraction in Arkansas and the Biggest Ball of Twine in Branson, Missouri.

Birthdays 35 through 39 were spent singing karaoke and eating bacon wrapped hot dogs. Before that, well, who knows really? I’m getting old and the memory is not what it used to be. But I know on many, if not most of them, I was taken out to dinner, usually somewhere involving Italian or steak.

The through line on all of those birthdays was Mary. I spent them all with Mary.

I left New Orleans at around 10:30 this morning, driving east under crystal clear blue skies. Getting out of the French Quarter by car is no easy feat, but I managed to not run over a single pedestrian, which I think earns me some sort of Big Easy cred.

US 90 is called the Chef Menteur Highway, although why is apparently up for debate. French for “Chief Liar,” there are some who say the region got its name from the local Choctaw Indians who were annoyed at governor who reneged on a treaty. Others say that it has to do with the Mississippi itself, all crooked twists and turns.

But whatever, the road is two and four lanes that cut through the eastern part of Orleans Parish, then up a narrow sliver of land between Lake St. Catherine and Lake Pontchartrain. It crosses a bridge and then meanders through the extreme southeast corner of Louisiana before passing into Mississippi and eventually becoming the highway that runs right along the gulf coast to Biloxi.

To say this area was hit hard by Hurricane Katrina is like saying said hurricane was a bad storm. In many areas Katrina literally scrubbed the earth clean, taking houses, buildings, trees, roads, bridges, and everything else and throwing it all a few miles inland. The devastation caused by the flooding in New Orleans was horrific; stomach-churning in a “this can’t be happening” kind of way. What happened east of New Orleans was unimaginable. It’s almost impossible to wrap your brain around it.

Five years and a few days later, it is still easy to see the legacy of Katrina. Some of the buildings that were left standing are still there, abandoned hulking ruins with the high-water marks still visible, like a dirty ring on a bathtub. In other places, especially as you move further east, there are driveways to nowhere – places where there used to be something but now all that is left are weeds filling the cracked pavement of parking lots.

But in between that are new beginnings. I didn’t drive more than a couple of miles at any given time without seeing some sort of construction going on. And there was much more that had been complete for years obviously. Shopping centers, restaurants, apartment buildings, houses, condominiums, schools, and more, outnumber the ruins these days.

And as you get out on that tiny slip of land between the lakes, dozens – hundreds – of new houses, all up on stilts 15 or 20 feet high, seeming to point toward the open waters saying “go ahead, I dare you.” I think, at first, that it’s crazy. There will be another storm someday and it seems foolhardy at best to want to come back here; to build here; to try to live here. But then I remember that I live in California where, at any moment, the “Big One” could come along and swallow the entirety of Los Angeles and I think, “Who am I to judge?”

Mary and I always looked for themes, analogies, and metaphors for our Plucky Survivors trips. I had the better part of 70 miles worth of them driving along Highway 90.

It was just past noon when I turned off the highway into the Gulf Coast campus of the University of Southern Mississippi in Long Beach. It is a metaphor in microcosm. Many of the buildings are still abandoned, their empty windows staring out almost plaintively, their foundations and walls still cracked and crumpled. But elsewhere there are brand spanking new buildings and rehabilitated old ones. The campus is starting its new chapter, slowly, but surely.

I parked and grabbed a few things from my backpack, and walked across the lawn until I got to the plaque.

“I am called the Friendship Oak. Those who enter my shadow are supposed to remain friends through their lifetime no matter where fate may take them…”

There is more grass around the tree than when Mary and I visited as the final stop of our very first Plucky Survivors trip in 2006. More grass and more leaves. The tree looked a little battered but basically intact a year after Katrina but now it looks alive, healthy, and ready for all of the students to come back to the school around it.

A few weeks ago, Mary’s sister Deborah (Plucky Passenger 2007!) sent me a photo she had printed out from the website. It was of Mary and me, sitting on the bench next to the plaque under the Friendship Oak. She had put it in a cow-print frame, of course.

I took the photo and the frame, along with the beads I was wearing on the day Mary died, and placed them gently into a crook at the base of the tree.

Then I opened the plastic baggie that Steve had given me and began to sprinkle some of Mary’s ashes.

There was a bit of a breeze blowing in from off the Gulf, and the ashes floated in it. The sunlight cutting through the leaves of the tree caught them and they seemed to sparkle, like they were infused with microscopic diamonds.

When it was done, I stood there, my eyes closed, listening to the air moving around me, through the tree and the grass. It whispered softly. Gently. It seemed to be saying, “It’s okay. You can go on now.” I didn’t even notice I was crying.

A car pulled up and two women got out, one in her fifties perhaps and the other a bit younger. They walked around the tree and started taking pictures of each other in front of it. I walked up to them, trying to wipe away my tears, and asked if they wanted me to take a picture of the both of them. They said yes, so I had them sit on the bench and framed the shot just so.

“Are you two friends,” I asked?

The older of the two hooked her arm in the other woman’s and pulled her close.

I took the picture.

and then I walked back to my car and got back on the road.

So today, February 7, 2016, a couple of days before Fat Tuesday, nearly six years since Mary left, I took a drive again.

The highway is much the same, although of course 10 years later there are fewer scars of Katrina still visible.  Most of the buildings are newer and the bridges were washed out have been replaced.  And people are still saying “I dare you”… 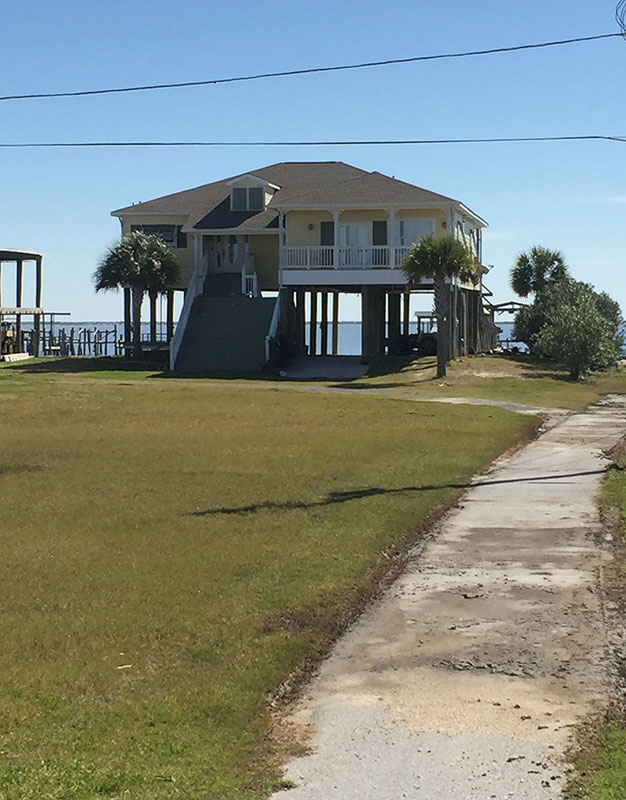 For miles there are the pristine white beaches on one side… 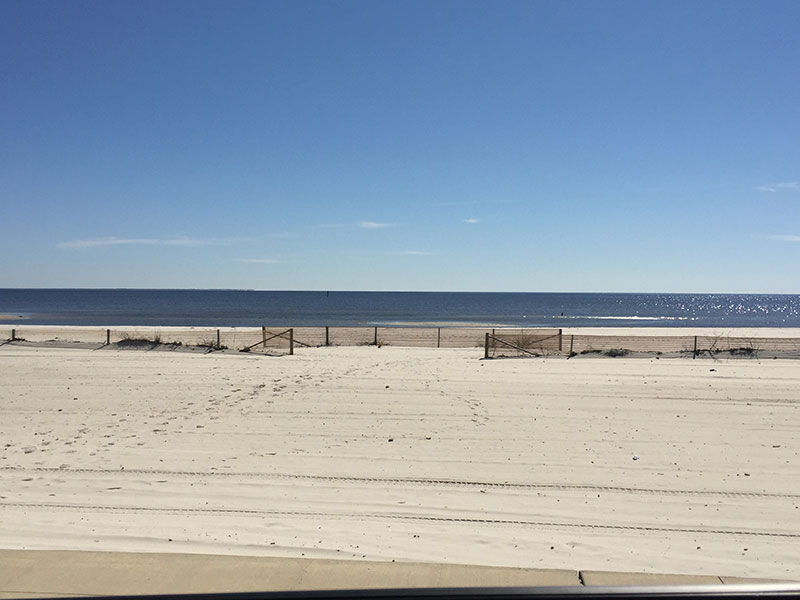 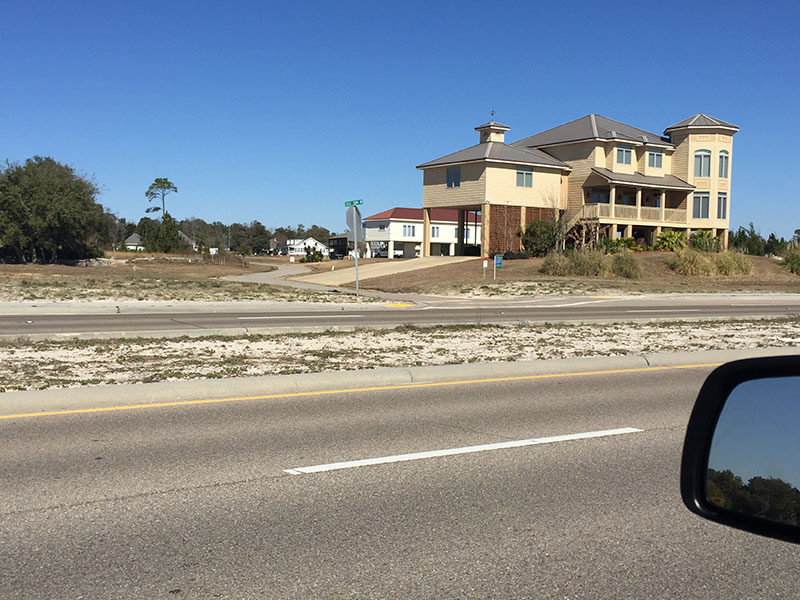 And because they really want to tempt fate, someone went and put a shopping mall AND a giant Walmart along the highway…

In some ways, it is like the hurricane never happened and yet you know it did.  You can still feel it in ways both big and small, from the huge new levees built along the highway to the occasional abandoned building, rotting in the sun a decade later.

The Oak is still there and seeing it was like seeing an old friend.  This is hallowed ground to me and I stood amidst the limbs and placed my hand on the trunk and stood in the place where I sprinkled Mary’s ashes.  I sat on the bench – now metal instead of stone – and gazed around the reborn campus, the previously gutted buildings now rebuilt but quiet on this beautiful, sunny, blue sky of a Sunday.

Those who know me know I’m not a religious man, but moments like that are the kinds that will give even the hardest of cynics a moment of divinity. 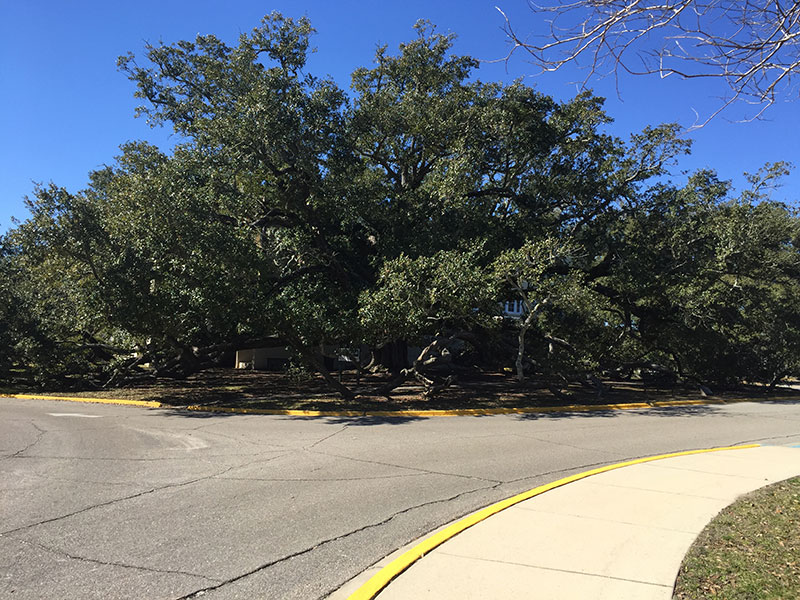 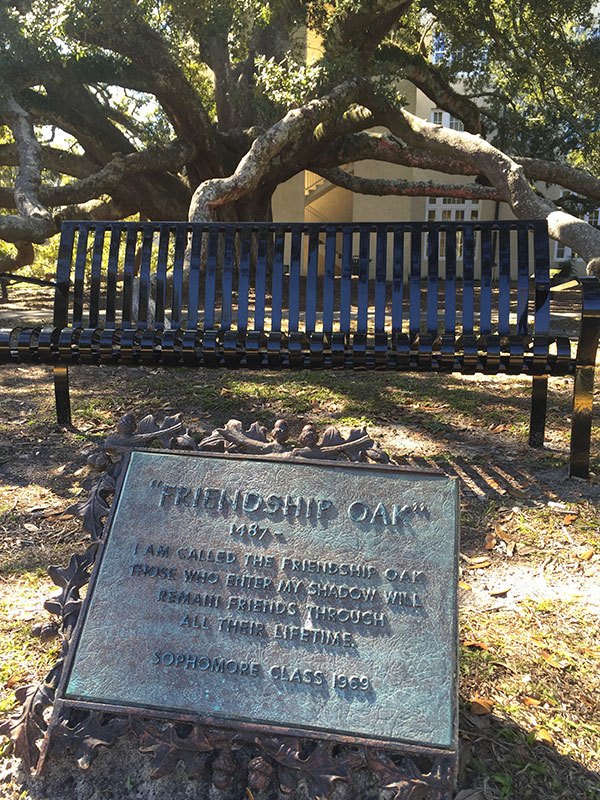 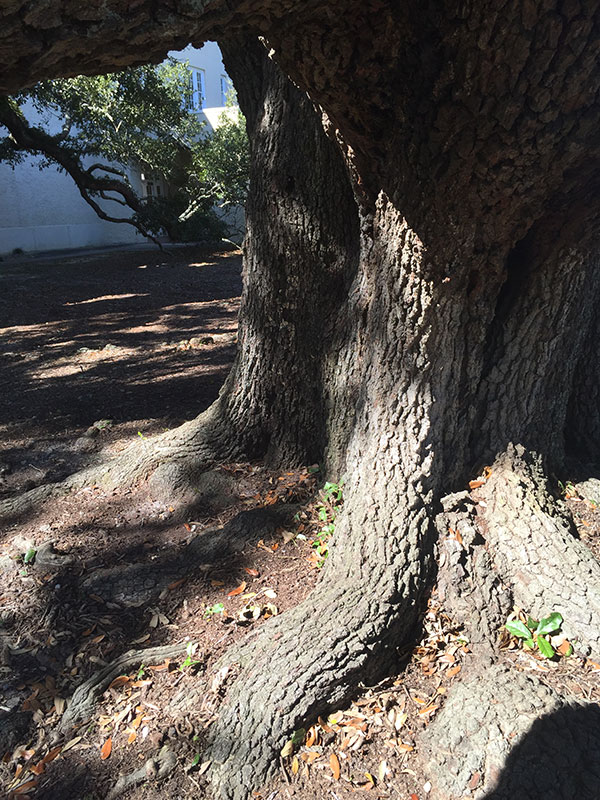 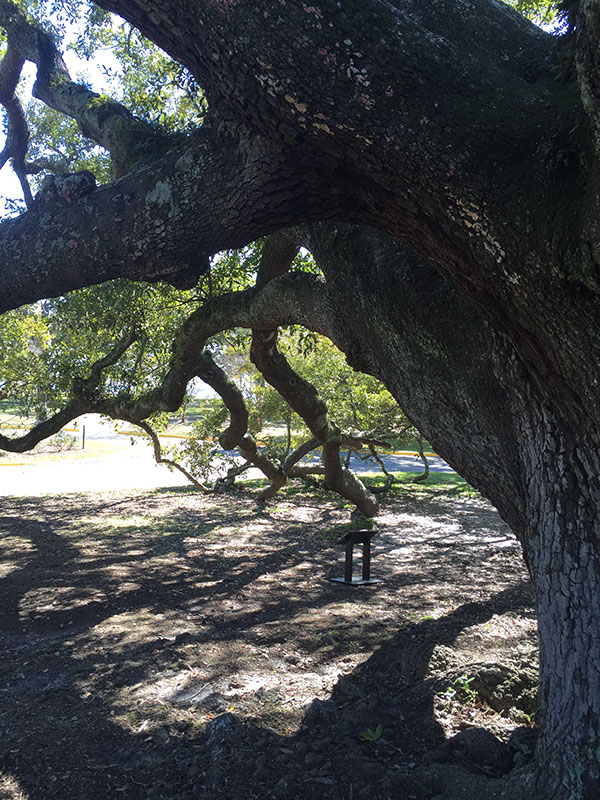 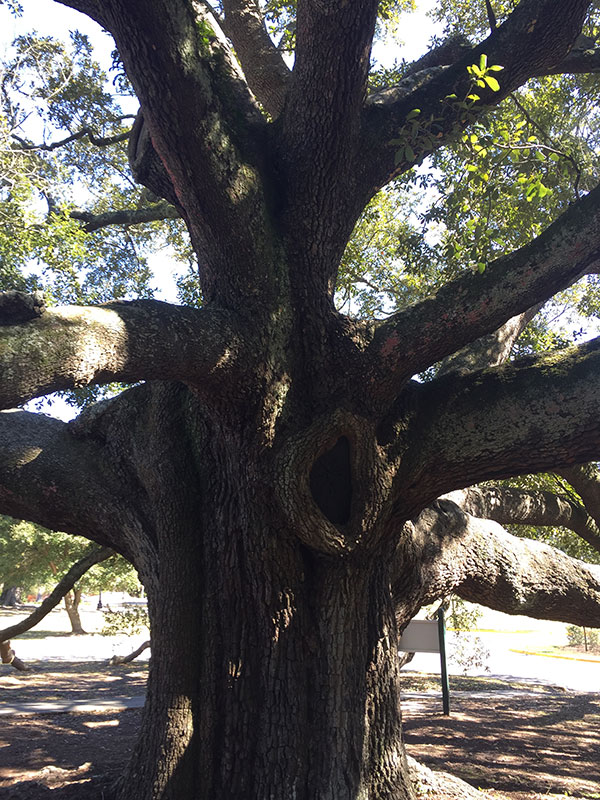 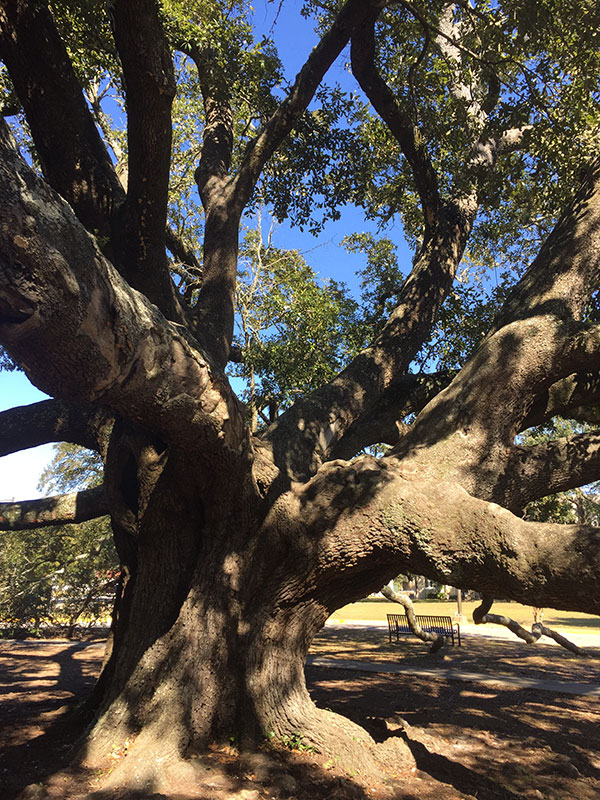 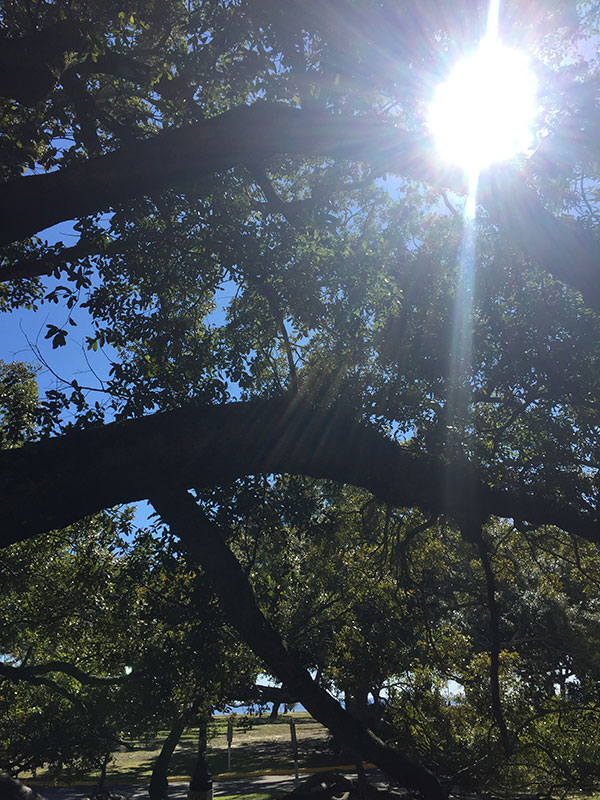