On my drive I encountered a Mardi Gras parade in Long Beach, Mississippi, which was apparently an excuse to bring out the confederate flags.  If you look closely at this picture, there are at least a half dozen of them visible and this was one hurriedly snapped photo along miles of spectators along the route.  Yikes. 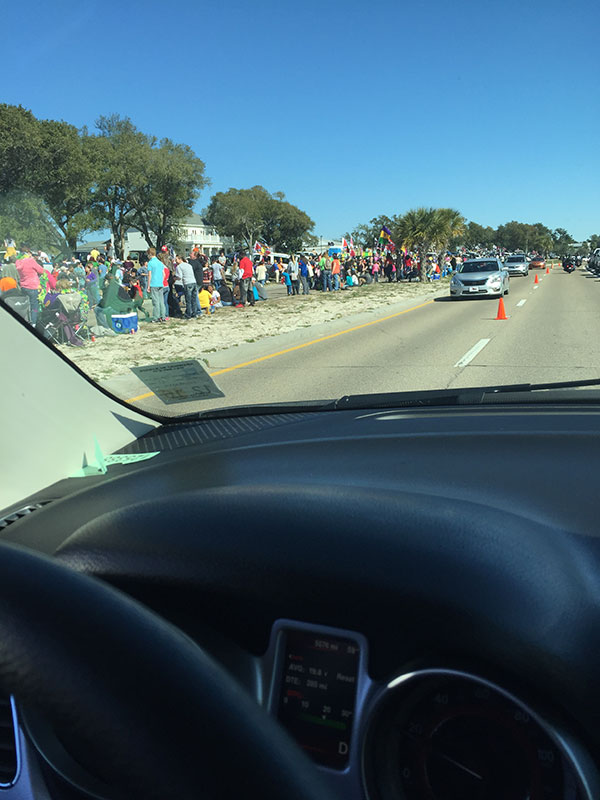 After the somber visiting of the Friendship Oak, I was hungry (which Mary would have approved of heartily) and so I went in search of something interesting to eat that wasn’t a Waffle Hut.  Seriously, there is one of those things about every 3 miles.

But instead I saw a giant pig on top of a car advertising the restaurant Slap Ya Momma’s Barbeque. 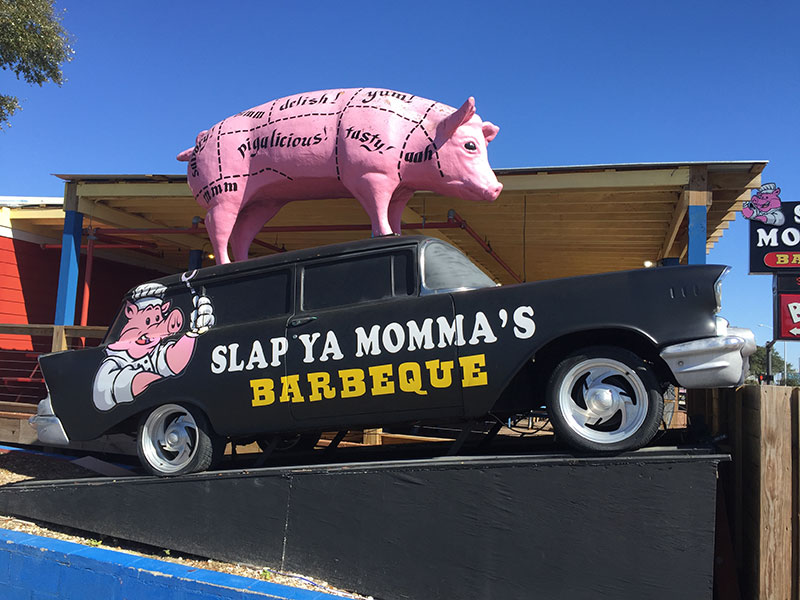 A pulled pork sandwich drenched in sauce on a delicious bun (kinda like ciabatta but not quite) and a side of mac and cheese with grated cheese added on top for extra cheesiness.  Happiness ensued. 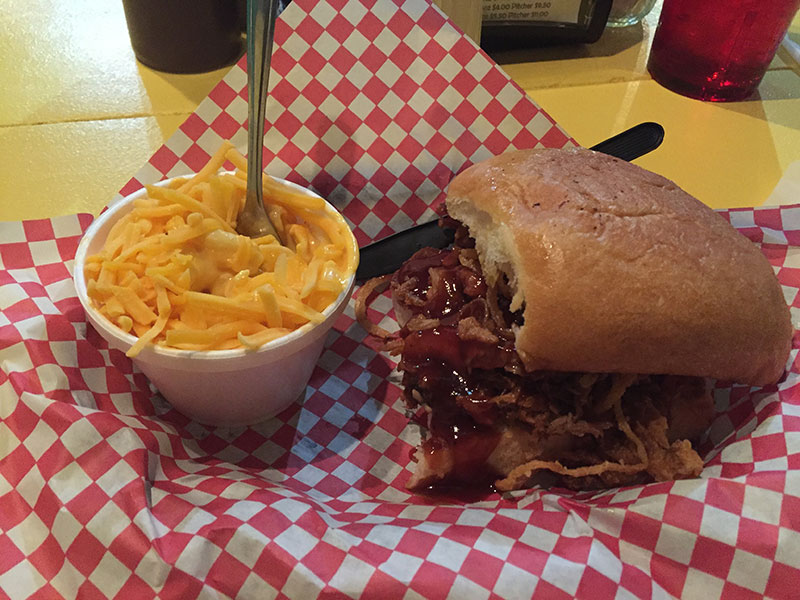 I headed back to New Orleans, a drive that took a little more than an hour… and then it took me 90 minutes to get from the freeway to the hotel… and I didn’t actually make it to the hotel.

I thought I was timing it so I’d get there after the afternoon parades and before the evening Bacchus parade, but I totally forgot about the whole “let’s start whenever we damn well feel like it” timetable and there were street closures and what can only be described as complete gridlock.  I sat on one street without moving for a solid 30 minutes.  People were walking around, talking, taking photos of the traffic jam.

So I finally get to Poydras street, directly across from the hotel, and I can’t get to it.  I can see it… it’s right there!!!… but that side of the street is blocked off and there is nothing I can do but go back around the block again.  I finally gave up and begged the valet guy at the Harrah’s Casino to take my car.  The only reason he did is I think he feared I was going to hurt myself or someone with it if he didn’t.

Dinner was a complete failure.  We shall not discuss it.

I caught just a tiny bit of the Bacchus parade, complete with giant floats and laser lights.  Impressive – but I was late getting to a party thrown by Harrah’s at the Cornet, a restaurant/bar along Bourbon Street.  Invited guest were given a big bag of beads and, after signing a waiver saying you aren’t going to jump, ushered out onto the balcony overlooking the bacchanalian hordes.  I armed myself for battle… 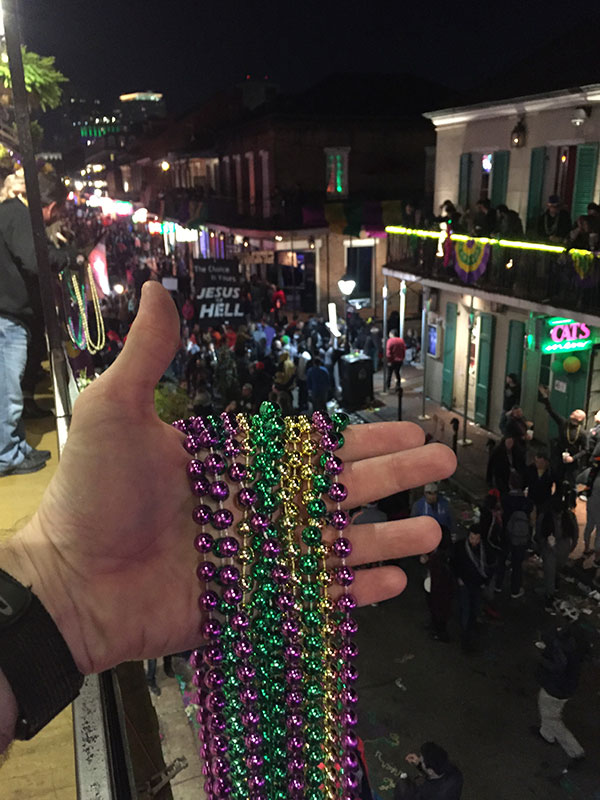 I wasn’t great at it at first and I suffered flashbacks to junior high when I was the fat kid picked last for every team sport.  Aim is not my strong suit and I think I may have poked out an eye or two.

But I got the hang of it – it’s more of a swing and drop kind of thing than an actual toss unless you have more athletic prowess than I do.

And despite the fact that I wasn’t asking, lots of women showed me their boobs.  This woman had just shown them to me before moving on to the people down the balcony from me to do it again… 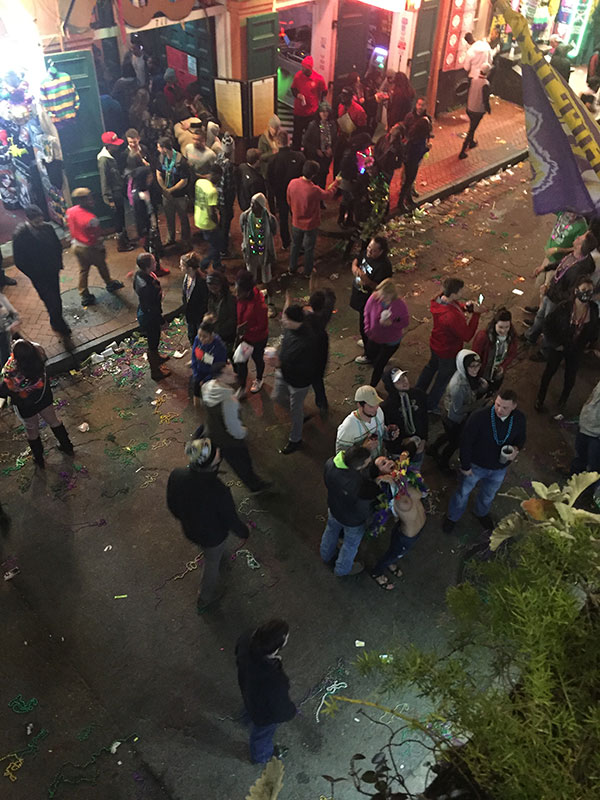 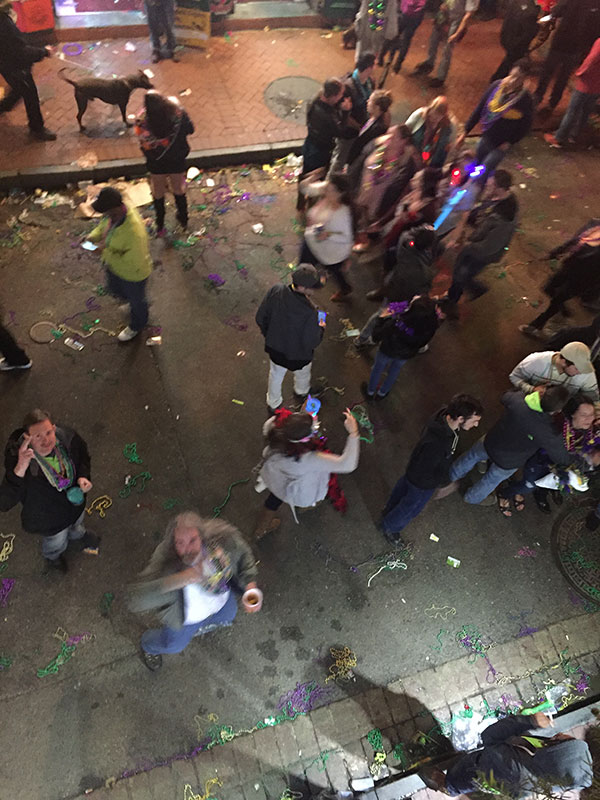 The bearded guy just got my throw and the woman next to him was next.

More bar hopping took up the rest of the night.

Tomorrow it’s off for a Voodoo and Cemetery tour…. until then!