It is not hyperbole to say that Prince literally changed the way I thought of music.

Growing up in Iowa in the late 70s and early 80s, most of the radio stations played country, classic rock, or farm reports and there was only one pop radio station that played, primarily, top 40. This meant that my musical education growing up was primarily disco and soft rock and my tastes ran toward the vanilla side of things – Barry Manilow, the Manhattan Transfer, Olivia Newton-John, Bette Midler, Donna Summer, and the like. Madonna, Duran Duran, and Michael Jackson shook things up in the early 80s but it was still all pop all the time.

I will never forget the day that all changed. It was in the spring of 1984 – I want to say April or early May – and I was in the garage waxing the new (used) car I had gotten as a high school graduation present. This was a momentus time for me anyway, just a few weeks away from liberation from the torment of high school, thinking about how I wanted to move to California and pursue my dreams of stardom. I had lost a lot of weight and I had a really cool car – a 1981 Mustang with T-Tops. Things were looking up.

Then a song came on the radio that was sitting on my dad’s workbench. It was unlike anything I had ever heard before and I swear I could almost hear my mind expanding.

It was “When Doves Cry” by Prince.

More than 30 years later it’s still a great song but when it first came out it was revolutionary, especially for pop radio. Moody and atmospheric; an almost tribal drum beat; no bass line which was virtually unheard of; layered intricate harmonies; fierce guitar work. I stopped mid-wax and just listened. At some point I stood up. And when it was over, music would never be the same for me.

I became obsessed with Prince. I had heard “1999” and “Little Red Corvette” of course (because they were Top 40 hits) but I never owned a single song by him but that changed quickly. I started with the “When Doves Cry” single then the extended dance mix that had the b-side of “17 Days.” I bought all of his prior albums – “1999,” “Prince,” “For You,” “Dirty Mind,” and “Controversy” – shocked and scandalized by the overt sexuality of those early recordings because nothing like that had ever made it on to Iowa radio. Remember, this is a place that thought Oliva Newton-John’s “Physical” was too graphic.

And then “Purple Rain,” both the movie and the soundtrack, which were earth-shattering both to me and to most of the rest of the world.

From that point forward the fandom grew. Albums release days were like Christmas to me and more than once I was outside of record stores before they opened just waiting to get my hands on the new Prince music. I collected 12″ vinyl dance singles, which not only turned four or five minute songs into 10 minute epics but it was often the only way you could get the unreleased b-sides that he loved to include – “Hello,” “Feel U up,” “Shockadelica,” “Irresistible Bitch,” “How Come U Don’t Call Me Anymore,” and the ultimate “Erotic City.” I got underground recordings of concerts, promotional singles, picture discs, and pretty much anything I could get my hands on. I decorated my corner of my dorm room at Iowa State and later my first apartment in Los Angeles with posters and record covers of Prince and his acolytes. 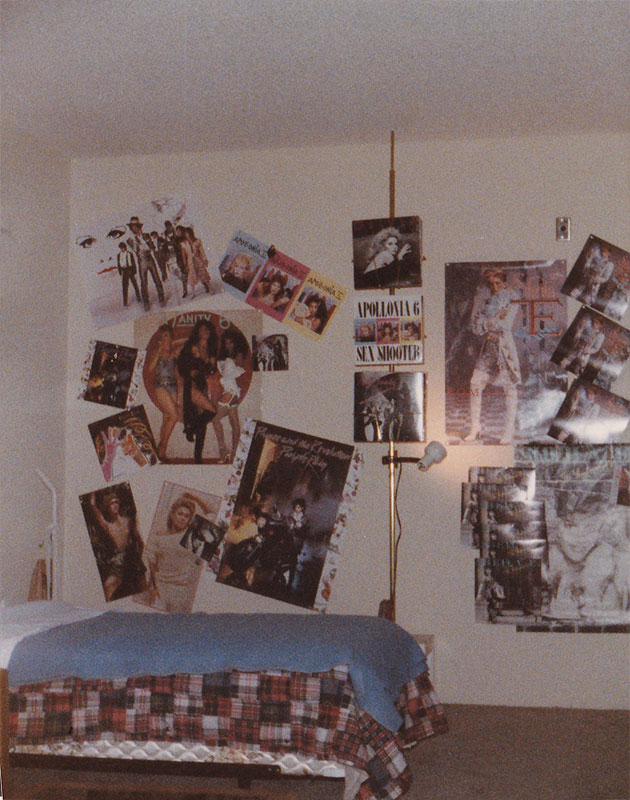 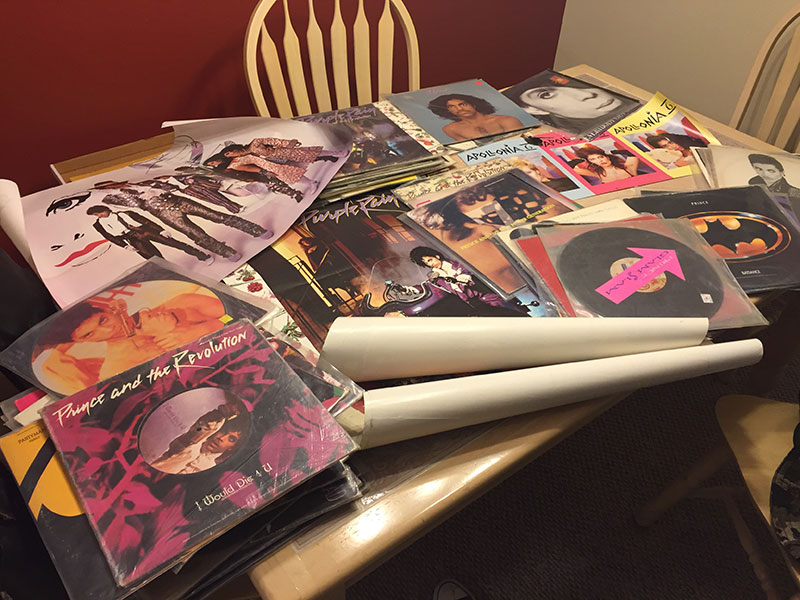 Oh yes, the extended Prince family was just as important. I dove head first into the obvious like The Time and Sheila E. but also Vanity 6, Apollonia 6, the Family, Madhouse, Mazerati, Carmen Electra, and more. People who had performed with Prince were added to the list – Sheena Easton, Wendy & Lisa, Rosie Gaines, and beyond.

I got buttons for my jean jacket and I even did the white boy approximation of dressing like him when I went out to clubs – a long coat, a frilly shirt, and a military style cap with lace netting hanging from it.

I saw him in concert at least a dozen times, from arena tours to intimate venues like his Glam Slam club in Downtown Los Angeles and at the Crown Theater in Las Vegas. On stage, nobody worked harder or captivated audiences more fully than Prince.

I even went so far as to study Prince’s music for the hidden messages and obscure references he liked to put in them. I broke a record player just so I could hear what the backwards message at the end of “Darling Nikki” on the “Purple Rain” soundtrack. I still remember it after all of these years – “Hello, how are you? I am fine because I know the lord is coming soon. I know the lord is coming soon.”

I figured out weird tie between his deep cut “All the Critics Love U in New York” from the “1999” album released in 1982. One of the lyrics is “It’s time for a new direction\It’s time for jazz to die\Fourth day of November\We need a purple high.” Two years later Prince launched his global “Purple Rain” tour in Detroit on November 11, 1984. Turn that date into numbers – 11-4-1984 – and add the numbers together. 1999. Mind blown? Mine was.

I was thrilled to figure out how to pronounce the unpronounceable symbol – Victor. Long story but ask me about it if you are curious.

When I started writing I naturally turned to the greatest artistic influence of my life for inspiration. My first play was called “17 Days” (the b-side on “When Doves Cry”) and every play I wrote after that used Prince songs for their titles – “Mountains” (which won a bunch of awards), “I Would Die For You,” “Escape,” “Thieves in the Temple,” and more. I wrote a couple of never published novels called “Condition of the Heart” and “Strange Relationship,” two lesser known songs from “Around the World in a Day” and “Sign o’ the Times” respectively.

My fandom started to wane in the early 90s when he got into his battles with his record label and started releasing stuff from his vault that he knew wasn’t his best work just to fulfill his contracts. By the time he came back with material he wanted to do his sound had changed, or perhaps it was just my tastes and/or the world’s taste. His last top 40 hit was a reissue of “1999” in, appropriately enough, 1999.

But my love for his prolific 1978-1993 period never waned and to this day I still regularly put on my Prince and Family playlist on iTunes. I’m listening to it now as I type this. “Alphabet Street.” I know all of the words to backup singer/dancer Cat’s rap: “Talk to me lover come and tell me what you taste…”

The news that Prince died today devastated me on a level that I have never experienced before with the death of a celebrity. I know a lot of people were laid low by the death of David Bowie or Michael Jackson or Whitney Houston or (insert other musical great here) and I certainly had a moment of “awww” with all of them. With Prince it was instant tears.

Thank you, Prince, for helping me understand the possibility of music. For me, again today, it will never be the same.

The lyrics to “Sometimes it Snows in April” from the “Parade” album, which seem especially appropriate on this sunny April 2016 day:

Tracy died soon after a long fought civil war,
Just after I’d wiped away his last tear
I guess he’s better off than he was before,
A whole lot better off than the fools he left here
I used to cry for Tracy because he was my only friend
Those kind of cars don’t pass you every day
I used to cry for Tracy because I wanted to see him again,
But sometimes sometimes life ain’t always the way

Sometimes it snows in April
Sometimes I feel so bad, so bad
Sometimes I wish life was never ending,
And all good things, they say, never last