I still can’t quite put my finger on what it is about Savannah but whenever I get here I sort feel like I’m home. There’s something about the history, the people, the scenery, and the general laid back attitude mixed with a healthy dose of mystery in the air – like there’s something going on behind the proper facades of those stately manors and the genteel manners of their owners.

I got here Thursday and I’m staying at the Andaz, the hipper Hyatt if you will, right on Ellis Square in the heart of the Landmark Historic District. Unlike many of the hotels in town this is a newer building so it doesn’t have the history but it’s a nice place and I’ve got a generously proportioned two-room suite that comes with free beverages and snacks in the mini-bar so I’m a fan.

I almost immediately headed down to Rocks on the River to have my favorite Georgia Peach drink made with Fruitland Georgia Peach vodka, peach schnapps, orange juice, fresh lemon, and simple syrup, which sounds cloyingly sweet to most but is absolutely perfect for my taste buds. Sitting on the cobblestone River Street looking out at the Savannah River with a peach drink – well, it don’t get more Georgia than that. 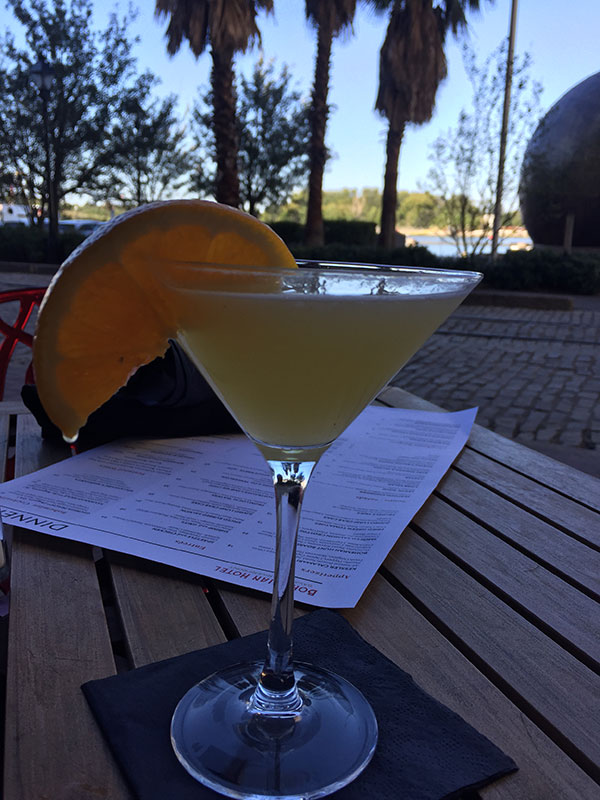 For dinner I went to the Five Oaks Taproom on Bay Street, a gastropub in the historic Guckenheimer building (built in 1855) that prides itself on serving only locally grown ingredients and Georgia-only brews. It was on the early side but I was literally the only person in the dining room even though I’ve heard that it is usually pretty busy. I started with the Bacon Brown Sugar Lollis, which is thick cut bacon on skewers coated in a cinnamon brown sugar glaze. Yeah. I’m in the south, bitches, I’m not messing around when it comes to food. The cinnamon was a really interesting twist that I approve of. 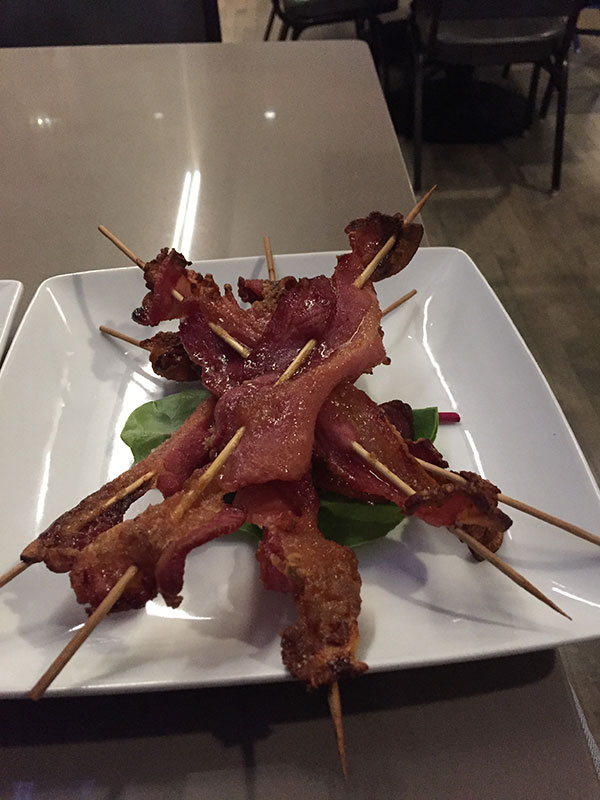 For the main I did the appetizer section Brisket Sliders, which came with so-tender-it-almost-melts-in-your-mouth brisket, smoked gouda, crispy onions, and bacon jam, because the big ass plate of bacon sitting next to it just wasn’t enough. Anyone got a problem with that? Didn’t think so. 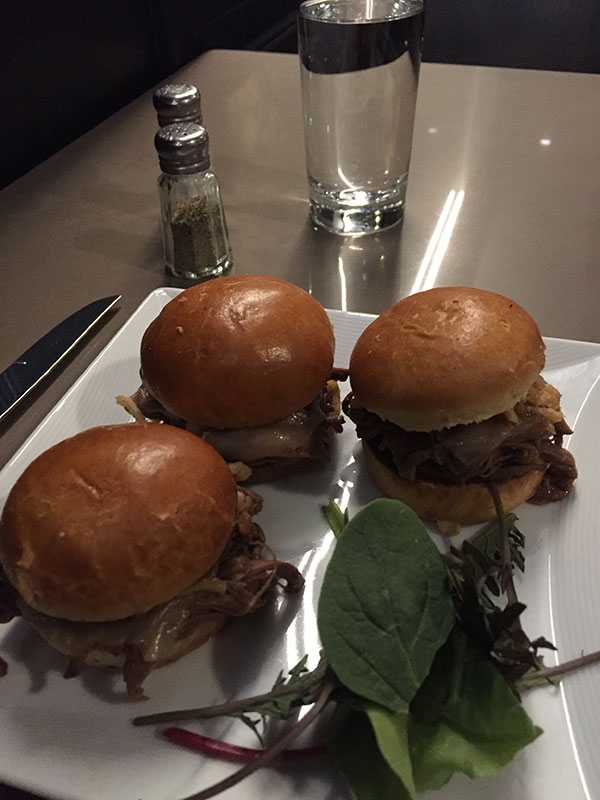 Thursday evening was the kick-off even for Savannah’s Gay Pride festivities, a masquerade ball at the historic (yeah, everything is historic) Mansion on Forsyth, where I had my 50th birthday dinner and cooking class last year. It’s a gorgeous mansion-turned-hotel and was the perfect setting for the eclectic crowd that included men in tuxedos and top hats, women in Victorian dresses, men in Victorian dresses, and women in top hats. It was a little bit drag queen meets high society meets disco but it was fun and they went all out with several bar spaces, a dance floor, makeup artists doing free Day of the Dead style face paintings (sponsored by MAC cosmetics), drag dance crew performances, and more. 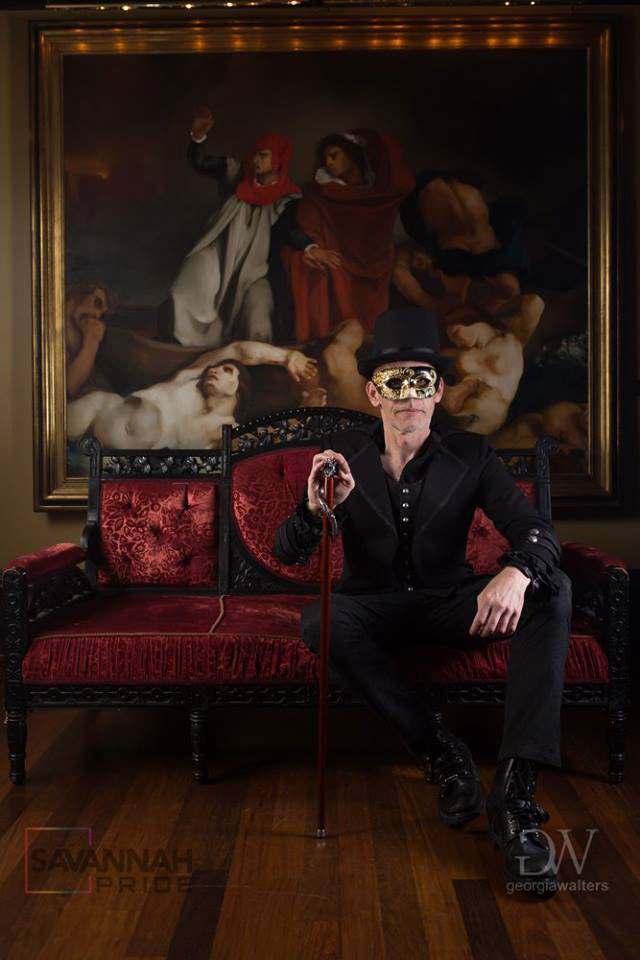 Friday I had a crap ton of work to do so mostly stayed in the room working on Hallmark projects but did manage to get out to eat. Lunch was at the highly regarded Ordinary Pub, located in the basement of a (yes) historic building on Broughton Street, the main shopping drag in Downtown. The menu is pub grub on steroids and their daily brunch has lots of interesting options but I finally settled on the Mac & Cheese Morning which comes with ham, diced tomatoes, green bell peppers, bacon, gouda cheese sauce, and a fried egg on top just in case your cholesterol levels weren’t already pinging like a radiation detector outside of Chernobyl. This was a case of how something that sounds so wrong can be so good – breakfast mac and cheese? Yes, please! It was fantastic, especially the chunks of brilliantly smoky ham. 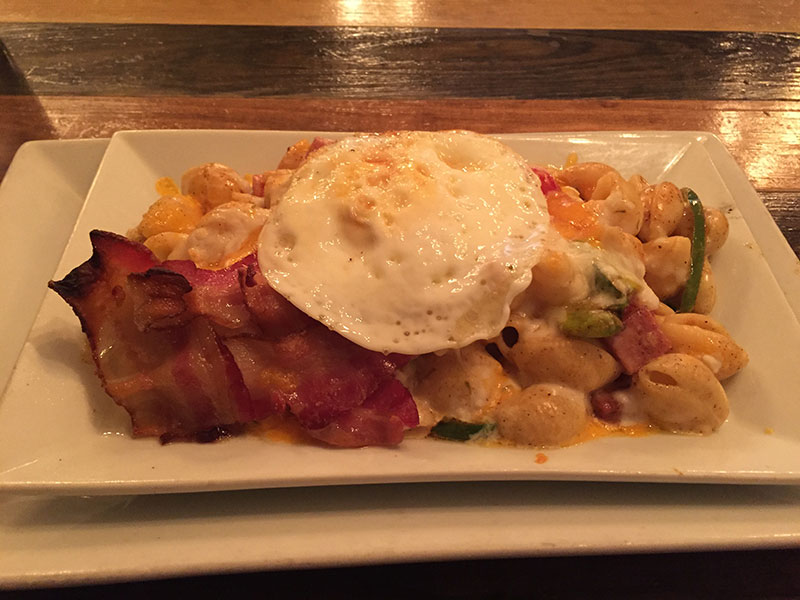 Dinner was at a newer restaurant, Little Duck Diner, located in a… no, got you this time, newer building right next door to the hotel. It’s a cute space done to look like a old-school diner but without all the kitschy theme restaurant silliness – think upscale fifties. The menu is eclectic with American breakfasts and sandwiches alongside Asian bowls and milkshakes. Apparently eager to test the limits of my blood pressure medication, I went with a variation on what I had for lunch known as the Trainwreck, with several kinds of cheese, bacon, house-made sausage patties, and another fried egg on thick sourdough bread. It was fantastic – kudos to whomever is making the zesty sausage – but the bread was a little on the heavy side for my stomach and so I wasn’t able to each as much of it as I’d have liked. 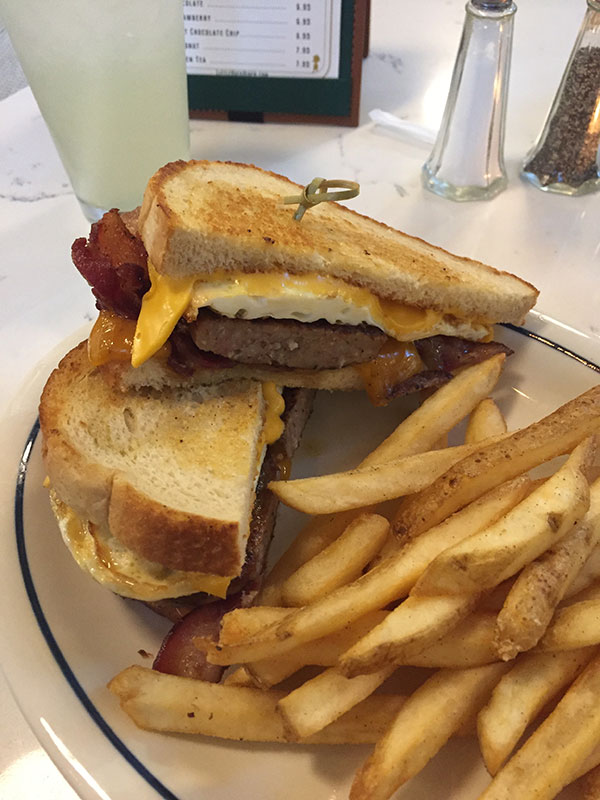 Friday night there were two events for Pride but I decided not to go because I’m lazy and didn’t feel like dressing up. Instead I went to Club One and caught a few of the drag shows and caught up with some of the locals that now recognize me when I come in. I’m like “Norm!” if he only came into the bar once a year.

Saturday was both the Pride festival and the start of the Savannah College of Art and Design (SCAD) Film Festival. I sampled a bit of both.

As mentioned above the Pride celebration was in Ellis Square, one of 23 in the city and both one of the oldest and newest at the same time. It was the third square laid out by the town’s founders in 1733 and served as a central meeting place and city market. All of that was demolished in 1954 and they built a parking garage in its place, a horrible thing that had a good outcome in that it kicked off the modern city preservation efforts that have resulted in all of the remaining squares being spiffed up and protected. The parking garage was torn down in 2006 and a new Ellis Square was erected in its place, that doesn’t quite have the charm of the other historic ones but is still a good place for a Pride festival.

There were the obligatory sponsor tents, community action tables, merchandise, and food vendors although not a lot of any of them – this is still a relatively small town event, which definitely has its charms. They also had an LGBT art and history display, a self-guided pub crawl with several of the local straight bars offering pride specials, and the drag queen trolley tours.

Trolley tours are big in Savannah and having a drag queen host one is genius if you ask me. Our cruise director, Influenza Miller, was delightfully catty as all good drag queens should be and came up with some interesting revisionist history for the city. Joni Mitchell’s “Big Yellow Taxi”? Written about Ellis Square (“they paved paradise and put up a parking lot”). Jones Street? Named after Grace Jones. You get the idea. I now want to start my own trolley tour company here in Savannah with all drag queen hostesses. 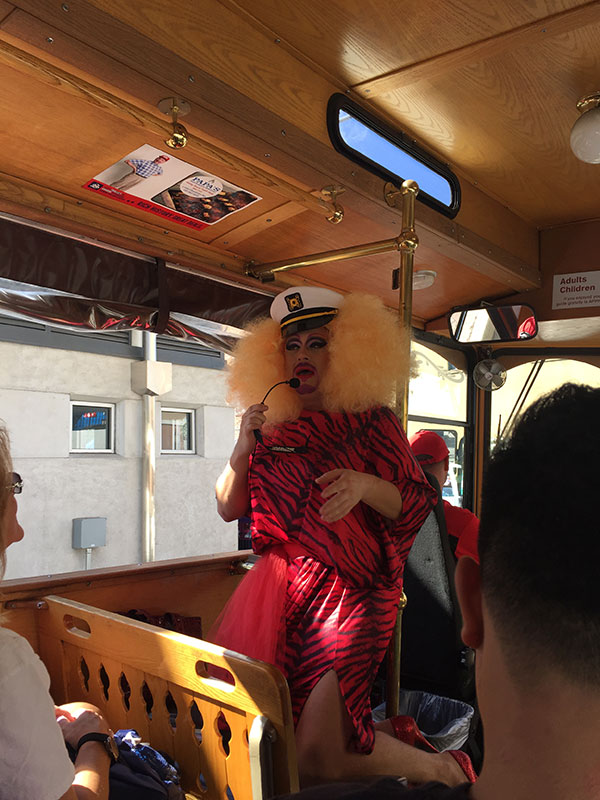 Entertainment was from Estelle, she of “American Boy” fame, but I skipped out and went to find non-festival food. I stopped at Treylor Park, located on Bay Street in yet another historic building that features a small dining room and a big outdoor beer garden. This is the kind of place that usually requires waiting for a table on busy Saturdays like this but I lucked into a spot at the bar and ordered up the Southern Slopping Joe, made with ground venison in their traditional tomato-based sloppy sauce with onion crisp and American cheese served with a side of collard greens. Lots of tangy goodness here! 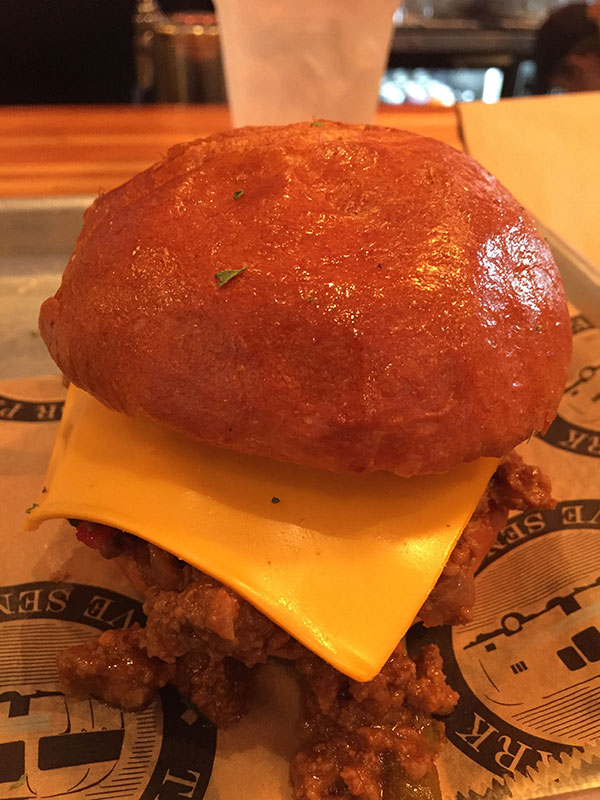 From there it was off to the film festival and the (say it with me) historic Trustees Theater. This Art Deco marvel was built in 1946 and purchased and restored by SCAD. They were having a screening of “The Big Sick” with a Q&A with Holly Hunter afterward. If you haven’t seen it, it’s a great movie based on a true story about Pakistani born stand-up comic Kumail Nanjiani and his relationship with his girlfriend Emily, who gets sick and slips into a coma shortly after they start dating. He finds himself stuck in between his disapproving Pakistani parents and her dysfunctional family, played by Hunter and Ray Romano. They say they don’t make romantic comedies anymore, but this is proof that they do – even if they’re a bit twisted – and they can still be a lot of fun.

Holly Hunter in person is exactly who you expect her to be – a tough southern woman who doesn’t take bullshit from anyone.

Dinner Saturday night was a rerun from last year at Alligator Soul, an upscale low-country restaurant that gets a lot of attention for its adventurous options that range from kangaroo to, well, alligator and beyond. I went for the bacon wrapped filet that I loved last year and was just as thrilled by it this time. Really, one of the best steaks I’ve ever eaten – tender, juicy, smoky, a little peppery, and a lot bacony. It is simply perfect. 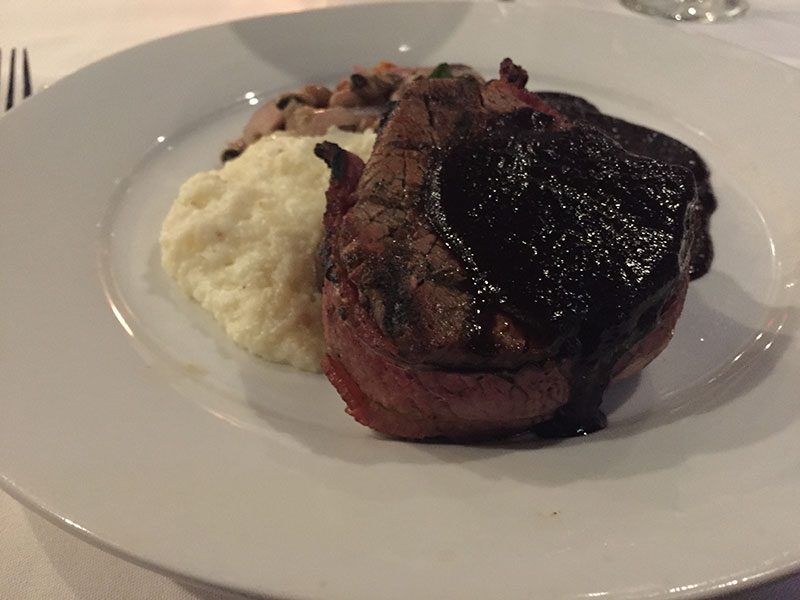 Back to Club One I went and let me tell you, mix Gay Pride with Halloween with the already usually tipsy Savannah and it makes for a really, really, REALLY drunk crowd. But a fun one, too.

Sunday, I was going to go back to a couple of movies at the film festival but I had work and I’m a weather wimp. Saturday was as perfect a day as you can ask for here – low 80s, light breeze, no humidity, gorgeous. Today, 54 degrees and steady winds at 15 miles per hour with gusts up to 30. Went out to lunch and said, um, hell no, I’m not going to go stand in line in this for a movie, thank you very much. It’s supposed to be up into the 60s Monday with no wind so I’ll get back on my schedule then.

Lunch was at Vic’s on the River, another upscale low-country restaurant in a historic building built in 1859 and designed by famed New York architect John Norris. It was originally used as a warehouse and as the headquarters of a shipping company. An interesting bit of the history as told by the restaurant’s menu: “During the War Between The States, General Sherman’s lesser officers used this building’s empty offices for housing and planning space. Our main dining room showcases a map that was hand-drawn by Union soldiers detailing Sherman’s march from Tennessee through Georgia. The map was originally found in 1901 during a renovation of the building. Workers were removing the old finish and noticed lines drawn on the wall. A small portion of the map was preserved, while the rest was covered due to damage and wear.”

I went all the way southern with country biscuits, meatloaf, mashed potatoes, and mac and cheese and couldn’t have been happier. 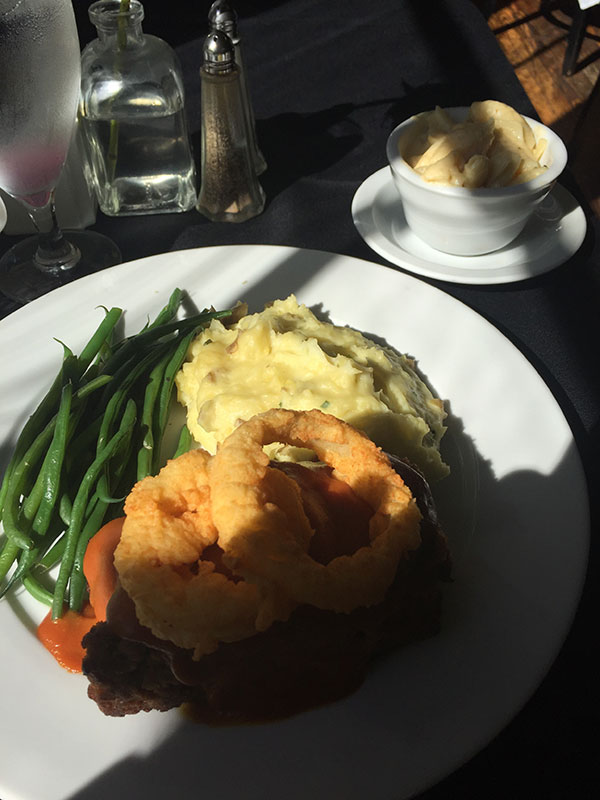 For dinner I finally made it to The Grey, widely considered to be one of Savannah’s best restaurants. Usually when I come here around Labor Day it is closed for an annual vacation so I’ve never gotten to eat there.

It’s located in the former Greyhound Bus Terminal, another Art Deco space lovingly restored and converted into a bustling restaurant. The meal was an experience, starting with an amuse bouche of wee little southern biscuits in a raspberry coulis. The main event was the best pork chop I’ve ever had in my life and I’m not being hyperbolic about this. The cut was lean and perfectly seasoned with slow-roasted green and red peppers and fresh lime. The side was a bowl of mini-baked potatoes with sour cream and scallions. A palate cleanser of a lemony something that I wasn’t pay enough to when it was described but was still good. Desert, a heavenly caramel cheesecake. And then, just because, they give you a Tootsie Roll at the end of your meal. I love this place and may go back to try something else if I can get a table before I leave. 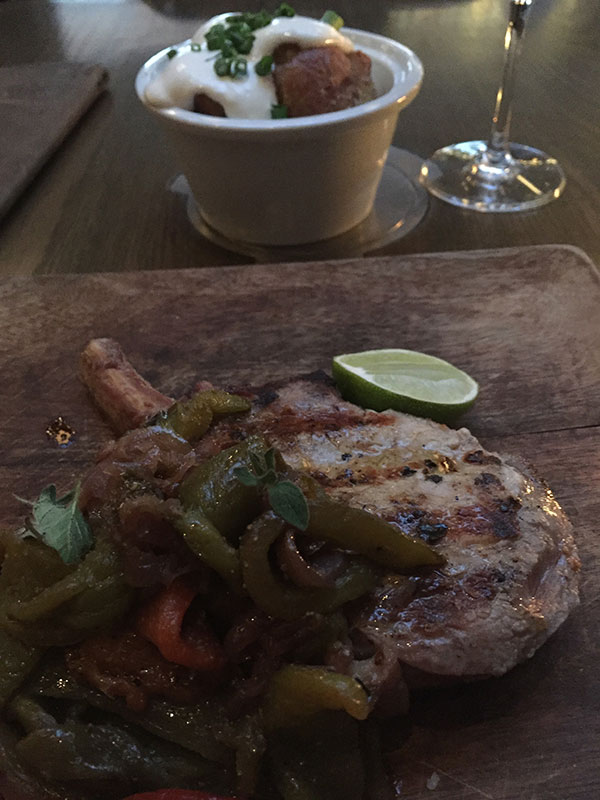 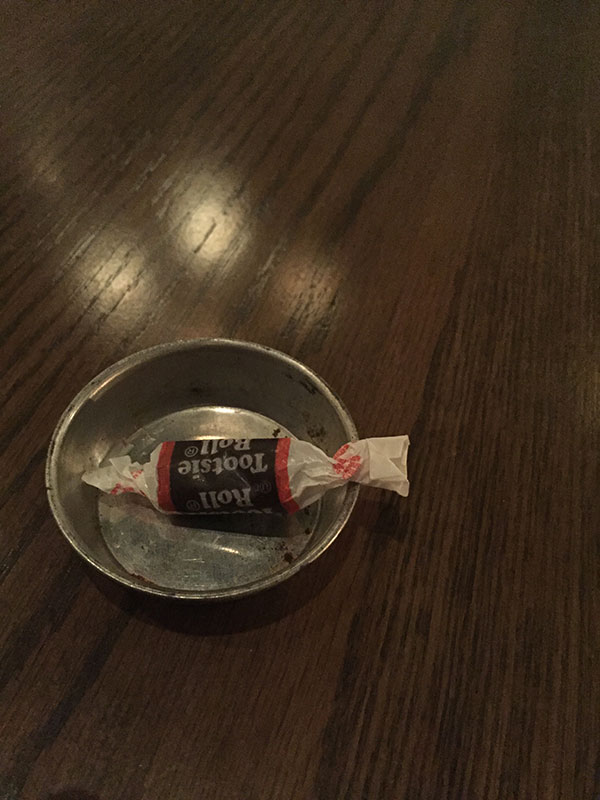