I talked to a friend of mine earlier tonight for the first time in a couple of weeks.  I thought it was a little weird that we hadn’t spoken much but I am more than a little bit self-involved these days so it wasn’t more than a passing thought every now and then.  But I was taken aback when he told me that he didn’t know what to say to me.  First, this is not a person that usually has a lack of things to say and second, I was shocked a bit that I forgot.  I forgot what it’s like to be on the other side of the cancer relationship.

I remember finding out that my best friend Mary had breast cancer for the first time.  Mary and I had recently started working on Las Vegas travel writing projects together and I called her from a payphone at the Luxor, just steps away from a mechanical pharaoh that rolled around the attractions level blasting “Walk Like an Egyptian.”  I prattled on about that and other Las Vegas minutiae until Mary said, “I have something I need to tell you.”

“That doesn’t sound good,” I said.

“I have breast cancer.”

My memory sucks.  I don’t really remember anything prior to last Wednesday with anything more than a hazy vagueness, but I remember that moment with stunning clarity.  The noise of the nearby casino, the heft of the big black pay phone receiver, the strains of “Walk Like an Egyptian” hovering in the background like some sort of highly inappropriate soundtrack created by a music editor with absolutely no taste in, you know, music.

“Fuck,” I said.  It may have been “Shit” or “Goddamnit,” I really don’t remember, but it was definitely a curse word.  It summed up the brief moment of panic that I had; the utter helplessness in the situation.  What do you do when your best friend has a disease that could kill her?  Or at the very least suck really, really badly.

Me, being me, I immediately did what I always do when faced with these kind of challenges, which is to jump into action to figure out how to surmount it.  The problem was that there wasn’t anything I could actually do.  This was Mary’s fight and I was just on the sidelines; a cheerleader waving my pom-poms for a really important game.  So, I decided, if that’s the role I needed to take, then take it I would.  My idea: The Cancer Kit.

The Cancer Kit was a package I put together that contained what I viewed as the essentials necessary to get through battling the disease.  Since there would be chemotherapy and that would involve hair loss, I immediately drove to the Liberace Museum to get a bejeweled baseball cap and then went to Serge’s Showgirl Wigs to get appropriately outlandish replacement hair.  To both of our mutual disappointment, they didn’t come with headdresses.

Back in LA I added in a Princess Diana calendar on which to mark off the days of treatment and toys for Mary and her husband Steve’s dogs because one often forgets the children in situations like these.  I got several trashy magazines and a healthy supply of chocolate because of all of our mantras, our favorite as probably this: Chocolate Fixes Everything.

But one thing we did agree upon is that cancer happens not only to the person who gets it but to all the people in his or her life.  And we also agreed that just like most medications, results may vary.  Some people want to talk about it endlessly and ask about all the gory details, others feel as though they should keep a respectful distance, some shut down, and others caper madly while wearing those silly hats with the bells on them.  None of these reactions is any less valid than the others.

Like I said, I forgot what it’s like to be on the other side of cancer.  It’s not fun.  Sorry about that.

But regardless, you should know that I get it.  You can say or not say or do or not do or think or worry or cry or shrug or whatever and it’s totally fine and valid.  You’re not going to “bother” me if you call or e-mail.   If I’m not in the mood to talk, I just won’t pick up the phone.  And I’m not going to be offended if you don’t want to call or e-mail or wouldn’t know what to say if you did.  You have your reaction to cancer and I’ll have mine.

Hopefully we’ll have a hearty laugh about it later when neither one of has cancer, okay? 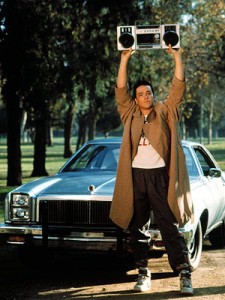