I was kind of lazy today.  As I mentioned in yesterday’s post, I am old and tired and old some more so I just couldn’t face walking a billion miles in the Charleston heat and humidity to explore all the things I wanted to explore.  So I blew off a visit to the Magnolia Plantation this morning and just slept in.

For lunch, I ventured out to the Tattooed Moose, a really interesting combination of a dive bar and a foodie gastropub.  It kind of looks like it was a dive bar first, complete with sassy signs (“We don’t serve women here, you have to bring your own.”) and lots of animal heads with wacky party hats on them.  Then, it seems at least, someone came along and said “let’s serve something more interesting than chicken fingers and burgers.”

Hence what has been hailed as the “best sandwich ever,” Mike’s Famous Duck Club – duck confit, applewood smoked bacon, hickory smoked cheddar, garlic aioli, lettuce, tomato, and red onion, on Hawaiian bread done like thick, grilled Texas toast.   That and a side of duck fat fries served with more of that garlic aioli. 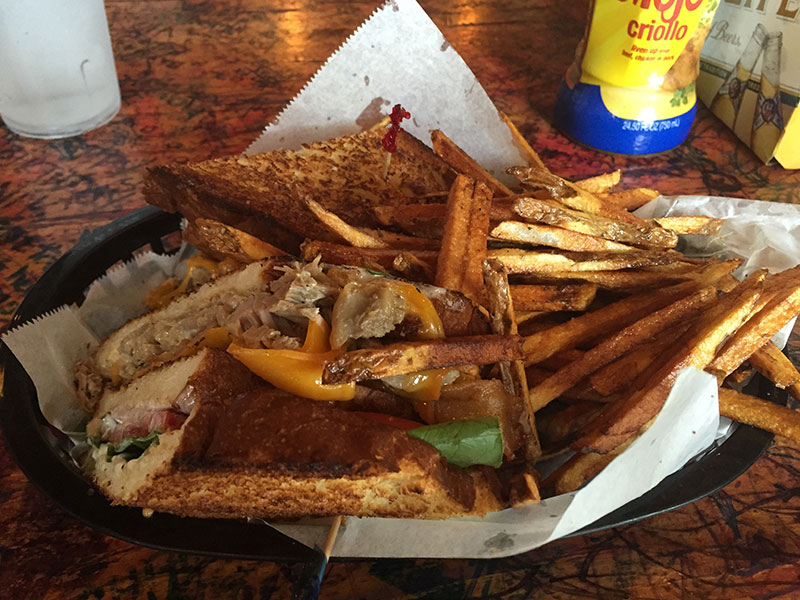 So, okay, “best sandwich ever” is pretty lofty praise and almost impossible to live up to but I will say that it was absolutely incredible.  The bread, the bacon, the cheese, the garlic, and the tender, melt in your mouth duck…  I can understand why people give the accolades they do.

As I left, I spied a couple of classic southern cemeteries nearby.  I’m kind of a sucker for really beautifully done places like this and while it wasn’t as drop dead (pun intended) gorgeous as Bonaventure in Savannah, it was still quite lovely.  A couple of pics… 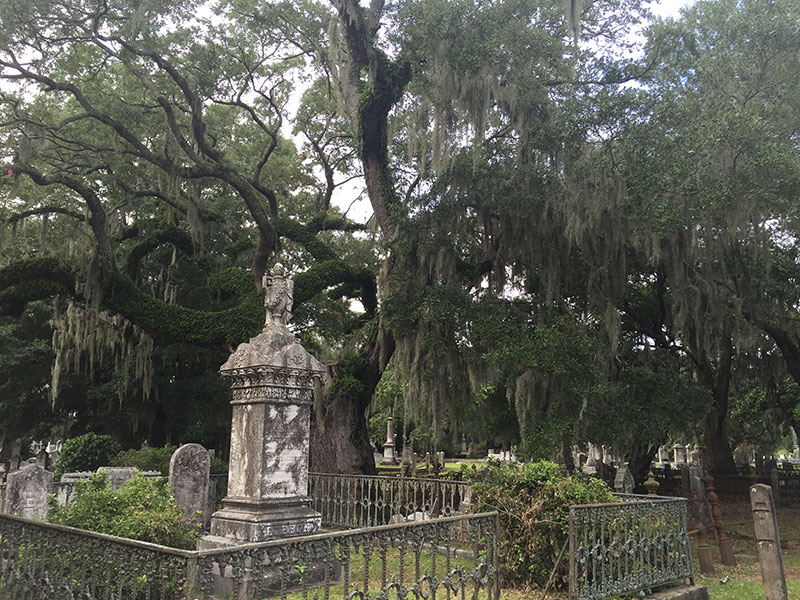 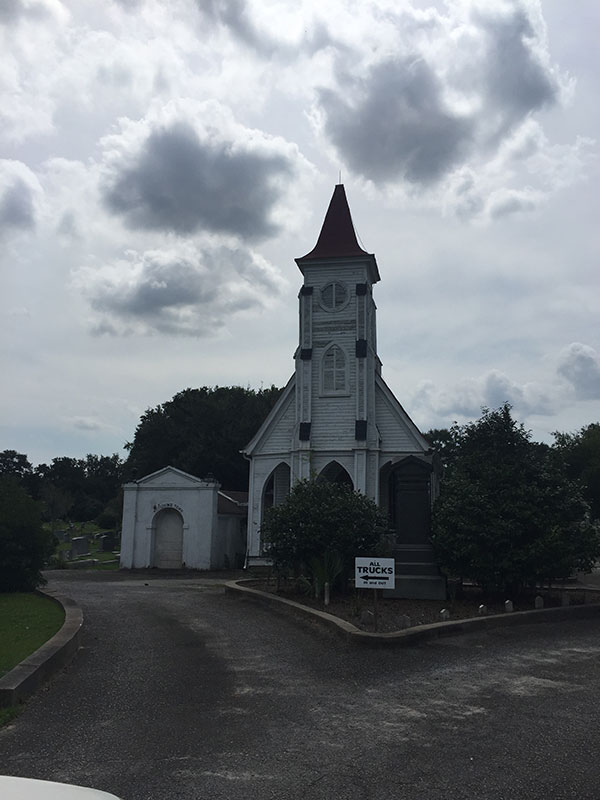 On my way back to the hotel I saw a sign that rung a bell and a detoured off the main road to see if it was what I thought it was.

The Emanuel African Methodist Episcopal Church is where 9 people were murdered during a prayer service a few months ago by a guy who liked to do things like pose with Confederate flags.  I didn’t take a picture of the church – it seemed unseemly – but I did stop for a moment to silently pay my respects from afar.

Continuing the theme of “Wow, People Can Be Monsters,” I visited the Old Slave Mart Museum.  Charleston was one of the major slave trading ports in America – in the world, actually – and until 1856, they could be bought and sold on the street like oranges at the bottom of a freeway off ramp.  When a law forbidding that practice was passed, nearly 40 slave marts were set up around town including this one, the biggest, known then as Ryan’s Mart.  It had a showroom, of sorts, where the slaves were inspected and negotiations between traders and buyers happened, and a jail, a kitchen, and more.  Today only the main hall still stands and they have turned it into a nice little museum about the horrors that people inflicted on other people. 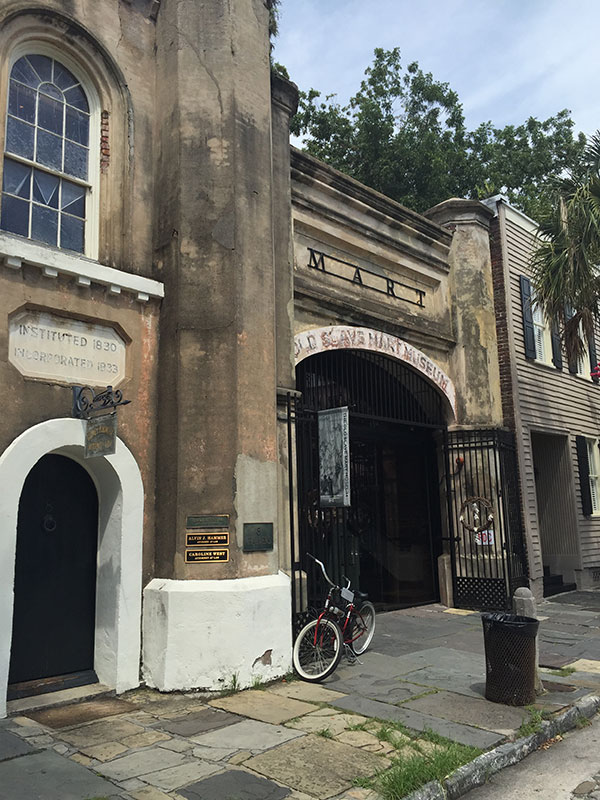 Saddened and needing a shower to wash off my white liberal guilt, I headed back to the hotel along a lovely cobblestone street… 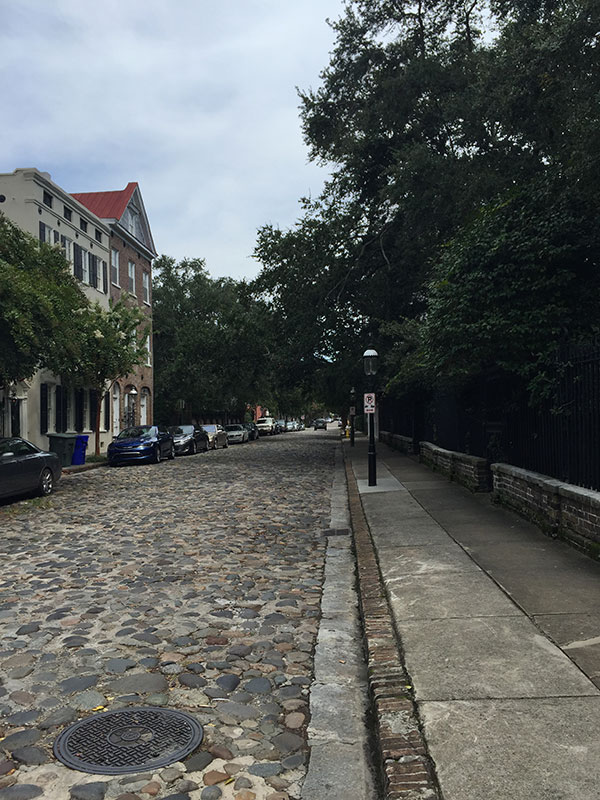 …that is lovely to walk but absolutely SUCKS to drive on.  I had to go this way last night and I thought the fenders were going to fall off the Malibu.

Back at the hotel I sat on the balcony with some freshly squeezed lemonade and read a book – Finders Keepers by Stephen King in case you’re interested.  It’s the second in a trilogy that is a crime thriller rather than a supernatural monster type thing.  Enjoyable.

For dinner I walked a whole 50 yards or so to Poogan’s Porch, another one of those Charleston institutions for nearly 40 years.  The story behind the name from the restaurant’s website:

Built as a spacious and grand Victorian home in 1888, the structure and its neighborhood had, by 1976, changed suitably to allow for the conversion of the house into a restaurant. The owners sold their home and moved away. A little, down-home Southern dog named Poogan stayed behind.

As far as he was concerned, our porch was his. After all, he’d been a neighborhood fixture for years, wandering from porch to porch, in search of back scratches and table scraps, endearing himself to all. From his proud porch perch, he served as official greeter. It seemed only right to the name the restaurant after him. Poogan died a natural death in 1979. We still miss him. His porch and restaurant live on in his honor.

And this, along the front path… 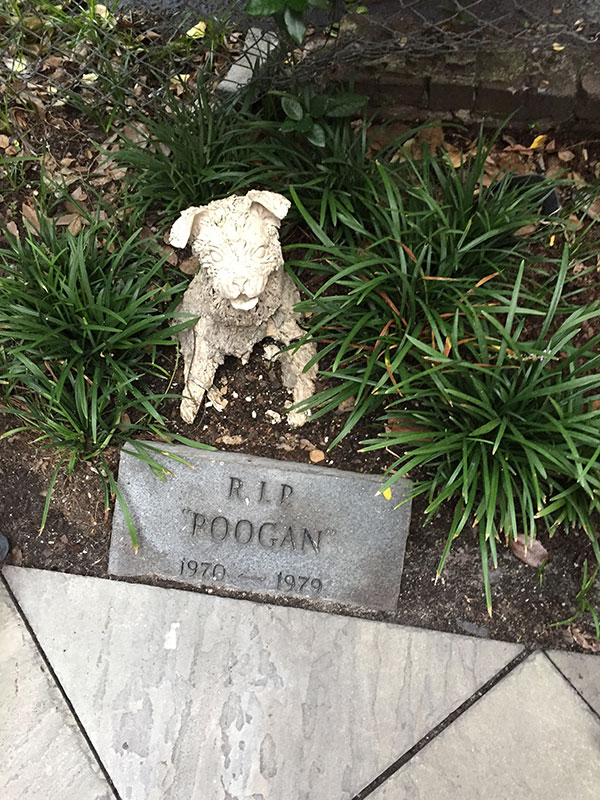 The house is lovely – I ate in what I think was the former dining room right next to a beautiful fireplace.  For dinner, a traditional fried pork chop with country ham gravy, served on a bed of mac and cheese done with aged, smoked gouda and ham, and a side of butter whipped potatoes. 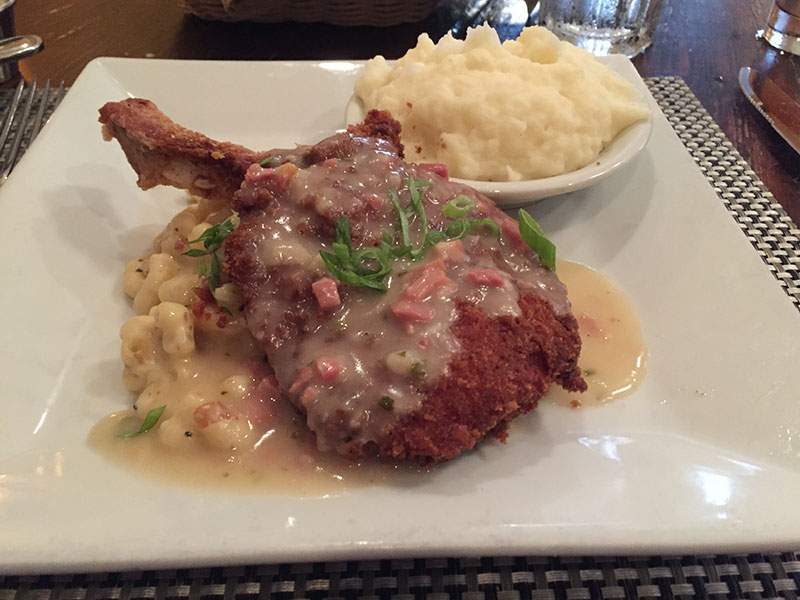 It was fantastic.  They really know how to eat, here in the south.

I got a dessert to go, which I am eating as I type this – bread pudding with strawberries and peaches.  Yum!!!

I was supposed to go to a show tonight but it was cancelled, so I spent the bulk of the evening catching up on the rest of the world, reading some more, and enjoying watching Charleston go by from my little balcony.

Tomorrow it’s off to Savannah!