There really is something magical about this place.  Look at this picture, just a slice of Savannah, and tell me how you could not want to be here… 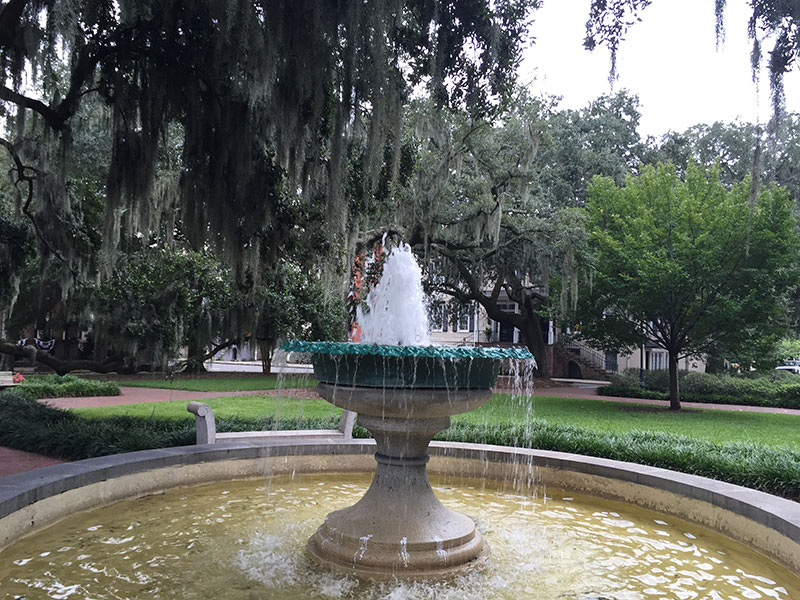 I left Charleston this morning and headed south along Highway 17, which winds its way through the marshy wooded lands just off the Atlantic.  It’s scenic and much more interesting than the Interstate but it does force you to go over this: 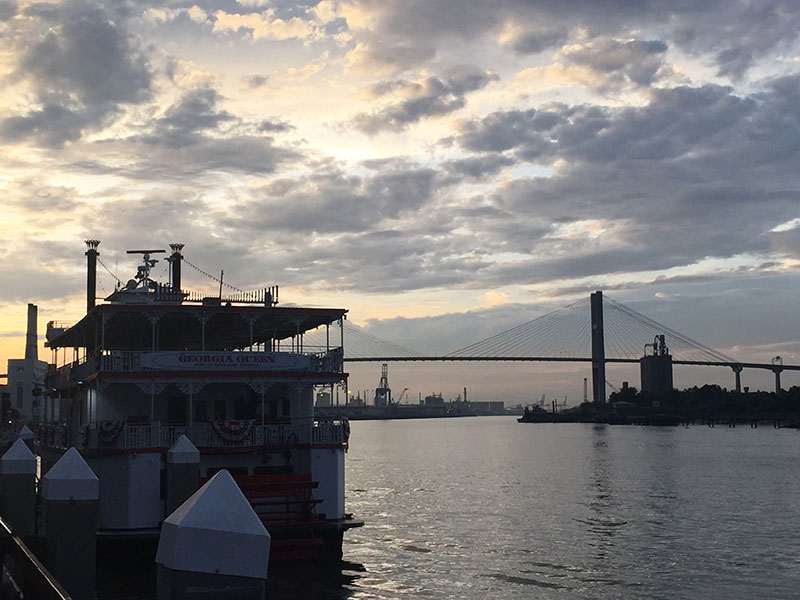 Have I mentioned that I’m terrified of heights and get severe vertigo when I drive over tall bridges.  This one was designed to give me vertigo.  I drove across, talking out loud the entire time… “Okay, we’re driving and I’m looking at the car in front of me and I’m not looking off to the side I’m just going to keep staring at the car in front of me, which is  Lexus, and the license plate is…” and on it went for the entire two minutes it took me to drive across.  I’m pretty sure I bent the steering wheel.

I’m staying at Marshall House, which is now my favorite hotel in Savannah.  It opened as a hotel in 1851 but was used as a hospital during the Civil War and again during two yellow fever epidemics.  It became a hotel again until 1957 when it closed and sat derelict for more than 40 years.  In 1999 it was purchased, restored, and modernized.  My room has 14 foot ceilings, a (non-functioning) fireplace, an antique claw foot tub, original wood floors, and a window that you can climb out onto to access the wide veranda with rocking chairs.  Seriously.  I want to live here.  A couple of pictures… 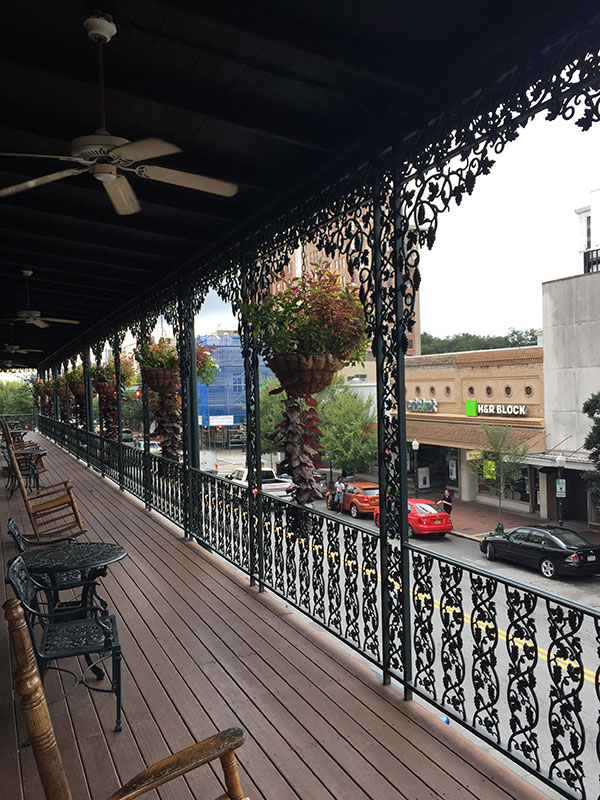 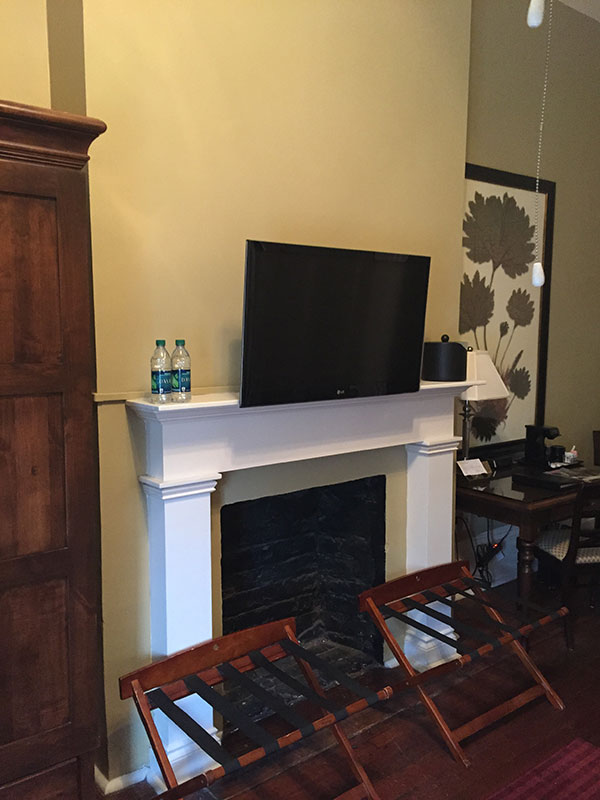 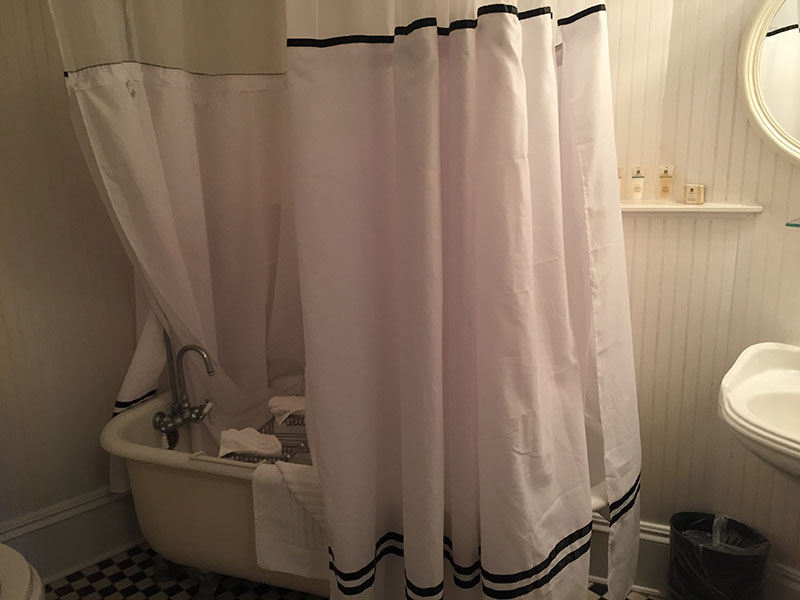 It’s also reputed to be haunted, having been used as a hospital for all those years.  It’s been on the Travel Channel several times as one of the most haunted hotels in America.  We’ll see…

Just as I arrived, a huge thunderstorm blew through town, which I took as a greeting since I love thunderstorms.  We don’t get them in Los Angeles (or at least very, very rarely) and it was so cool to sit out on the veranda, watching the rain and the lightning and feel the warm wind.  Have I mentioned that I want to live here?

After it cleared up, I went off on one of my missions while I’m here, which is to get pictures of every single one of the 22 historic squares in town.  I’m going to be using them for the website and social media campaigns for my book Interitas Volume 1: The Beginning of Sorrows, which is set in Savannah.  I can’t show you all of them – there are too many and I’m saving the really good ones, but here’s a little taste: 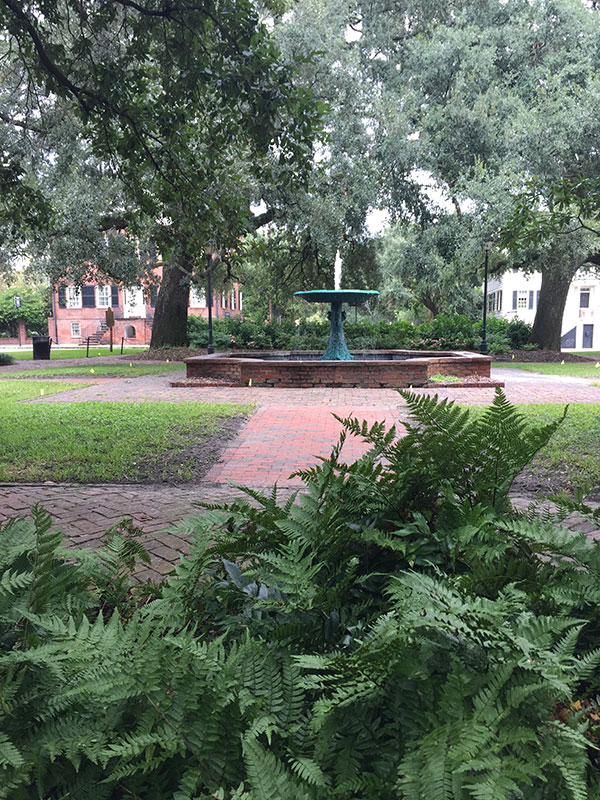 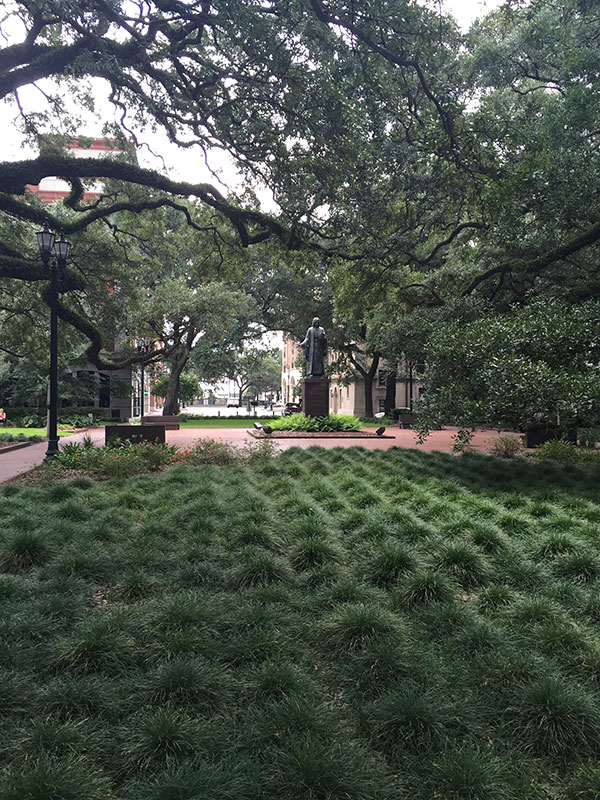 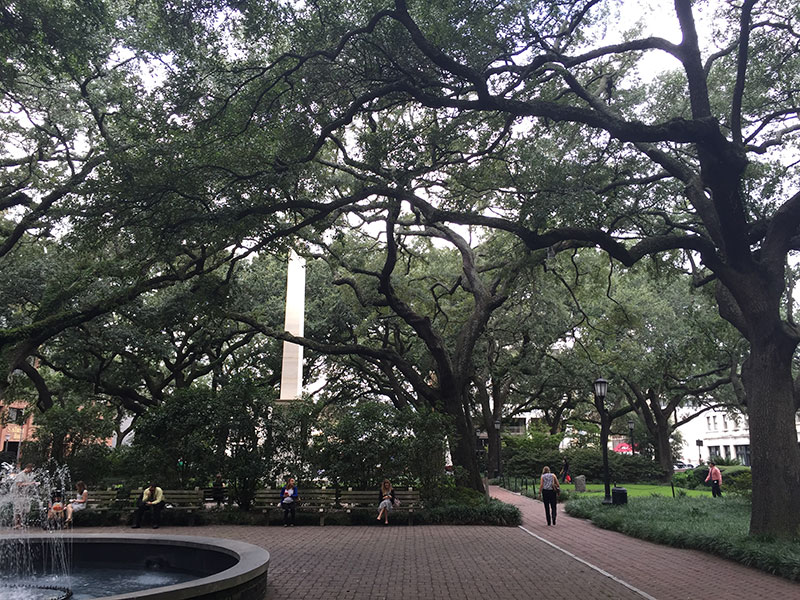 Lunch today was at The Pirate’s House, which is one of those Savannah rites of passage that I hadn’t done until today.  It opened in 1753 as an inn and became a favorite for the bloodthirsty “arrr matey” types who sailed the nearby waters.  It became such a part of the pirate lore that Robert Louis Stevenson is said to have incorporated some of the action that took place here into his book Treasure Island. 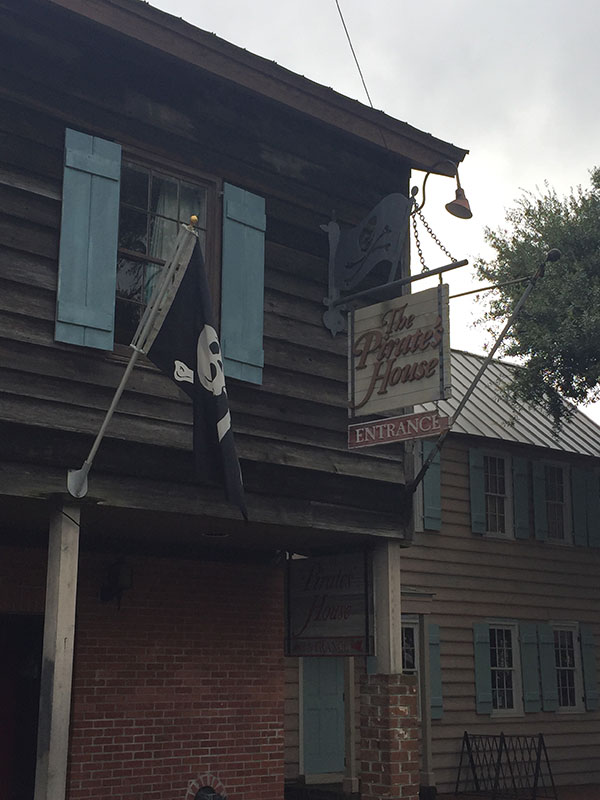 I had heard you come here more for the experience – the rambling dining rooms spread throughout the house, the staff dressed like pirates who wander around and try to nick things off your plate, and the treasure chest filled with candy – and less for the actual food, but I figured I had to give it a shot at least once.  I had the chicken gumbo and it was not fantastic but it was pretty good – lots of tender meat and veggies, just the right amount of kick, and a big mound of Savannah red rice. 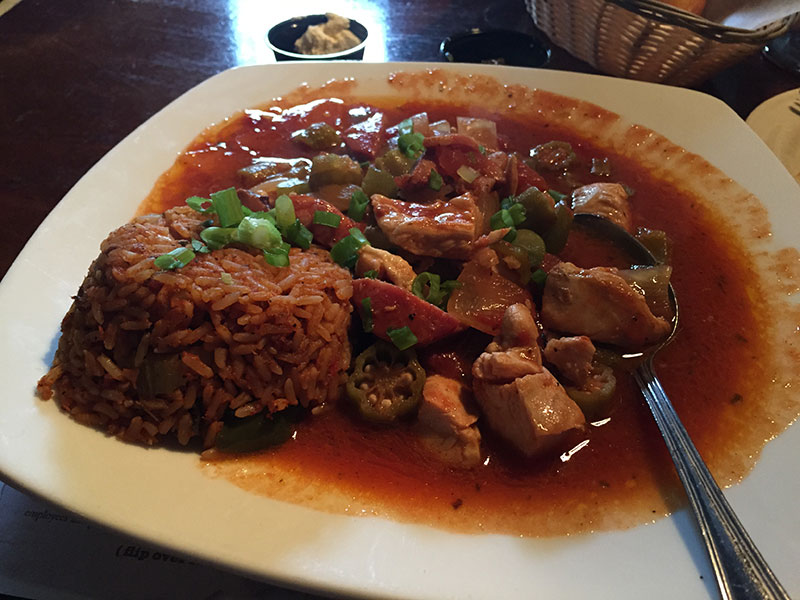 And yes, I found the treasure chest: 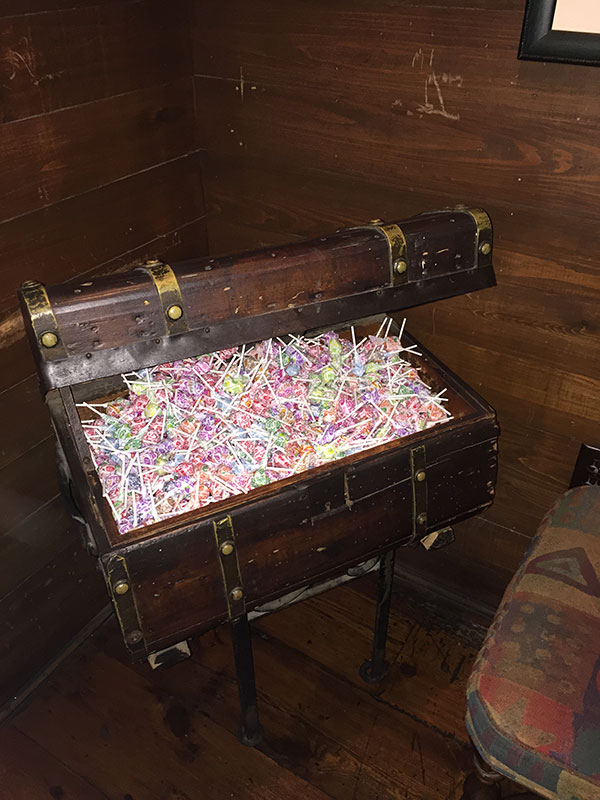 The rain came back and so I was forced to sit on the veranda and read for most of the afternoon.  So sad!

It cleared up again in time to go to dinner and I walked about a block away to B&D Burgers.  I had heard good things about them and tried their Colonial – 1/3 pound Angus, with applewood smoked bacon, cheddar, and a fried egg.  It wasn’t great – the patty was tiny and a little dry, the bun was right out of a store bought package, and the curly fries were obviously frozen and dropped into a fryer – my first disappointing meal of the trip. 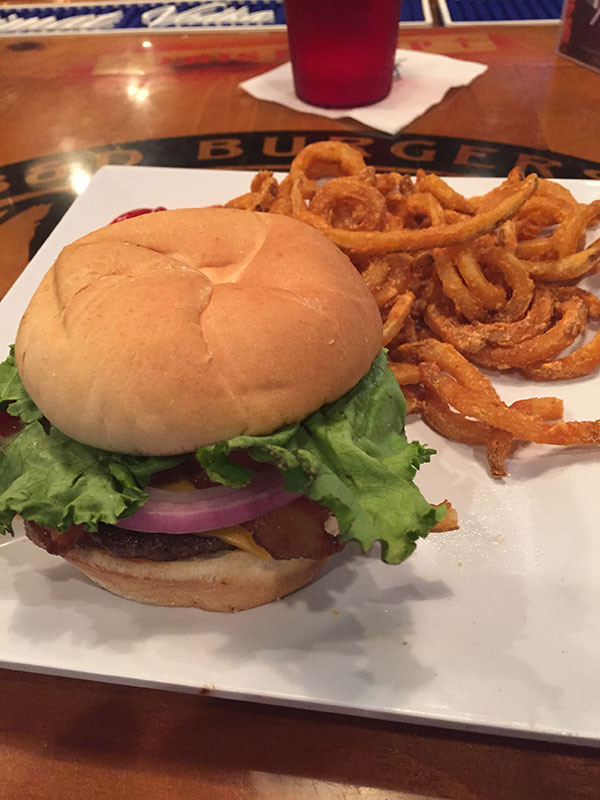 I am now on a mission to find a really good burger before I leave Savannah.

After dinner I strolled along Bay Street and River Street and got a lot more pictures, again most of which I am going to save for later, but will share one… 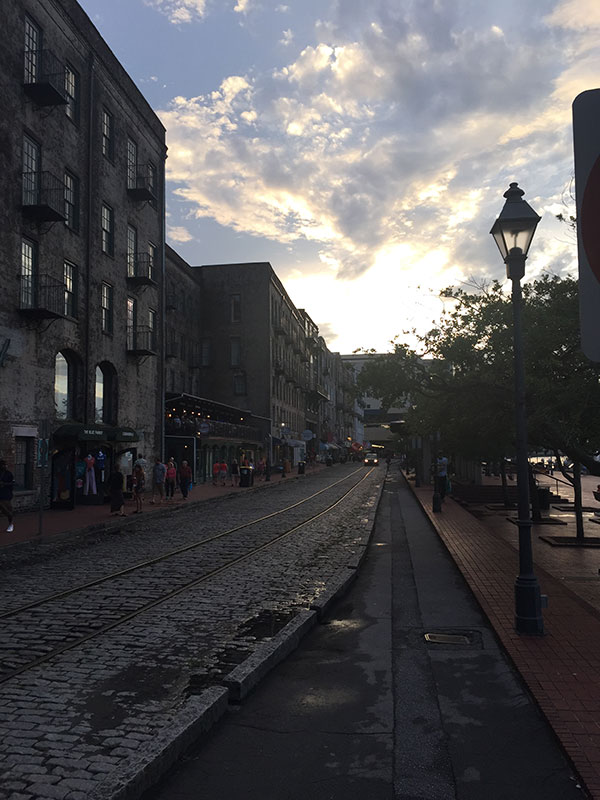 Tonight I’m heading to a local watering hole and will be toasting the arrival of my seven squared birthday with a shot of something at midnight.

Tomorrow, I go for the first of my two photo shoots for the author picture for my book.  This one is going to be at Bonaventure Cemetery!  Then more photos, a visit to a couple of the local bookstores, and hopefully better food than I had today.