Southern Fried Road Trip Days 2-3: Anybody Got an Ark?

Last night in Atlanta I ventured out for dinner at a place I had heard about that was supposed to have the best fried chicken in the city.  Challenge Accepted!

It’s called Odd Bird, and it’s kind of a pop-up concept in a popular breakfast spot called the West Egg on Howell Mill Rd a few miles west of Midtown.  There were too many good choices.  Chicken and waffles with thyme butter and rosemary infused syrup?  PB&J chicken sandwich (pimento cheese, bacon, and tomato jam)?

In the end I went for the Chicken Biscuit #3, with sharp cheddar and apple butter.  The thing that sold me?  They call them Butterlard Biscuits because they make them with butter and lard.  Can someone please call my cardiologist?  Tell him I also got a side of mac and cheese, please. It looked like this: 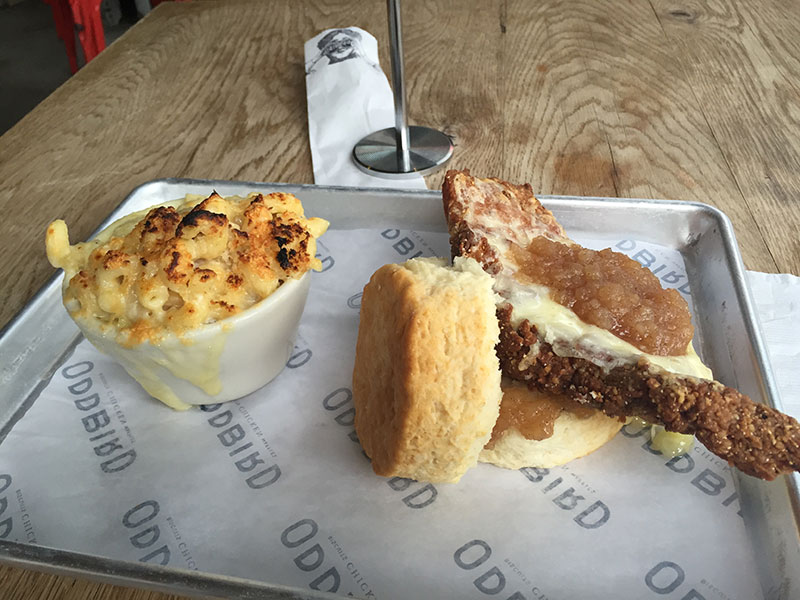 The chicken was perfect, with an extra crunch skin, tangy cheese, and sweet, sweet apple butter that was like the best applesauce I’ve ever had.  And the biscuit melted in my mouth.  Put this on your to-do list the next time you are in Atlanta.

Today, I was going to take a meandering road trip through Georgia on my way to Charleston, stopping in Athens and Augusta and any cute small towns I could find, but it was raining and I decided to skip Athens and take the freeway east to Augusta.  I’m glad I did.

About halfway there it started to rain heavily.  Then it started to pour.  Then it became a deluge.  Then I started collecting two of every animal to put in the trunk of the Malibu.  Most people pulled off to the side of the road and the few of us that kept going were doing maybe 25 miles per hour at best and it was impossible to see more than 10 feet in front of the car.  Scary. It let up and I had just gotten back up to speed when this happened: 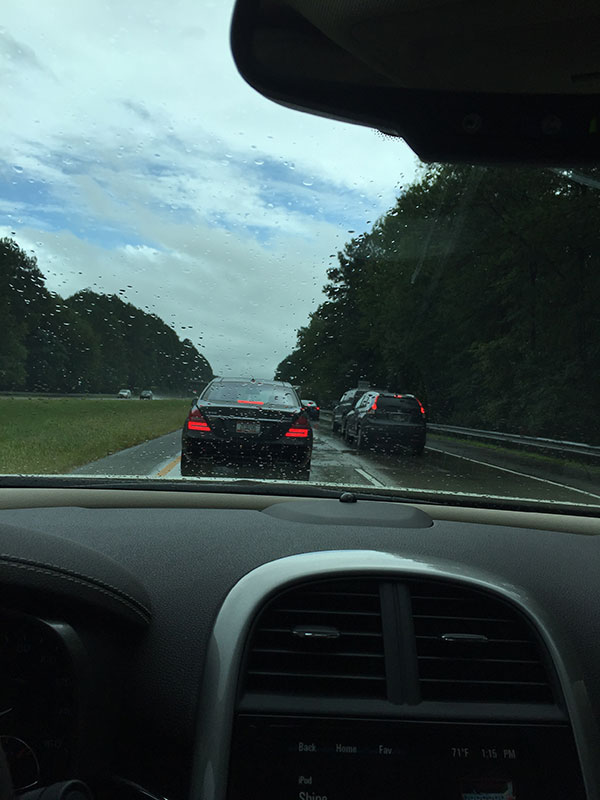 That would be dead stopped traffic on I-20 east of Atlanta.  Turns out a semi carrying a huge tractor decided to take a little detour into the median, taking out several signs, part of a culvert, and most of the front end of the truck.  We sat there for about 20 minutes until they managed to get one lane open and we inched past.

By the time I got to Augusta the rain had let up, which was good because I hadn’t done anything more than plug “Augusta” into Google Maps and let it take me from there, thinking I’d end up in the main part of town.  For the record, if you do that, this is where you will go: 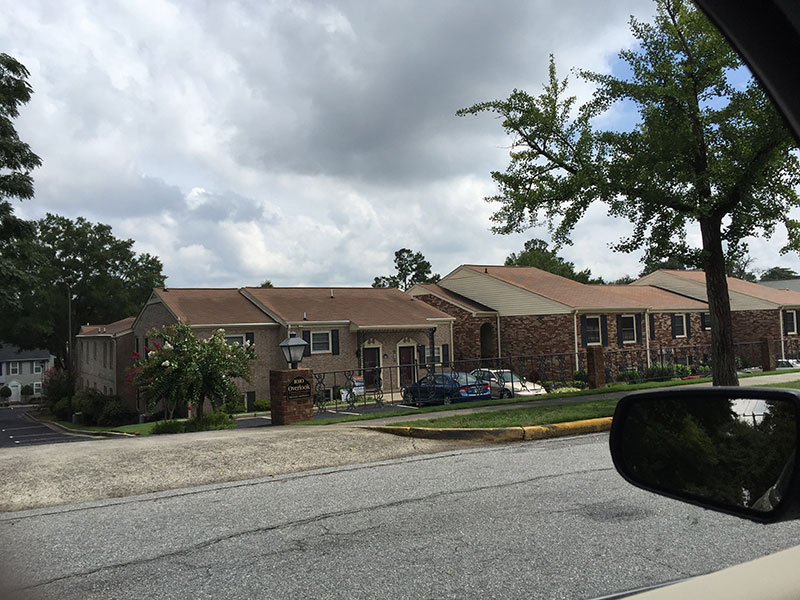 It’s a condo complex miles from the main downtown area.  I don’t know why. Following the moderately tall buildings I could see in the distance, I made my way to Broad Street, a broad street (hence the name) with a plaza running down the center and lots of shops and restaurants in the old buildings lining both sides.  It’s a neighborhood that looks like it is trying to be nicer than it really is but needs a good scrubbing to be attractive enough to want to spend any time there.

I did, however, stop and snap a picture of two of the Augusta landmarks – the statue of hometown hero James Brown… 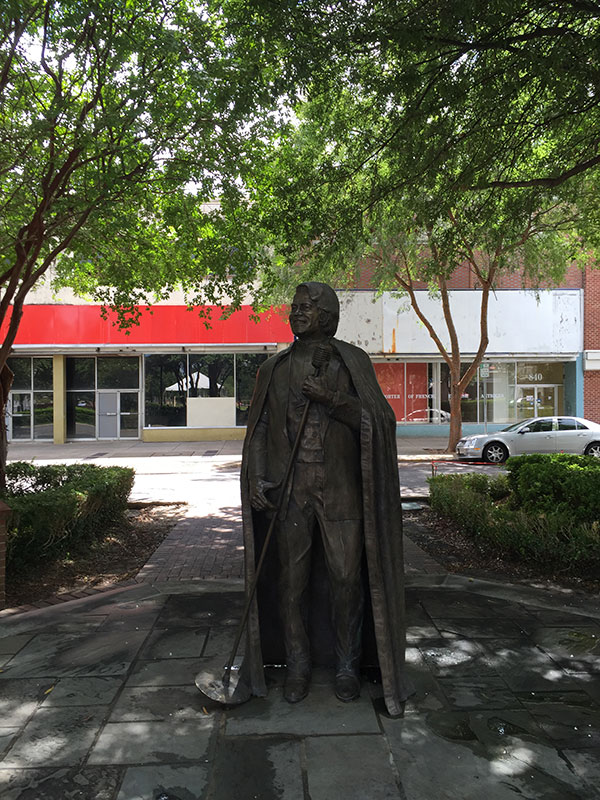 And the Cursed Pillar… 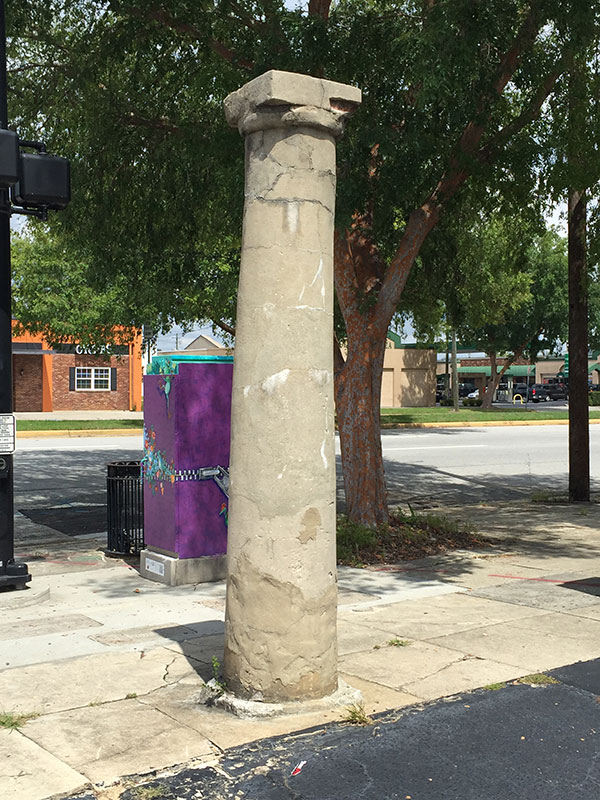 A farmer’s market used to stand here at the corner of 5th and Broad Streets in the 1800s.   According to the legend, a preacher came to spread the holy word at the market but was denied by authorities.  As he left in a huff, he swore that the market would be destroyed by a mighty wind and all that would remain is one pillar.

Shortly thereafter, a tornado blew through town and took everything of the farmer’s market except for what you see in the picture above.

Supposedly, attempts to remove it over the years have failed, with tales of construction workers killed by equipment malfunctions or crushed by debris.  Now it is said to bring a curse upon anyone who touches it.

No, I didn’t touch it.  I don’t believe in cursed pillars, but why risk it?

Since the rain had let up, I decided to get on the back roads and do a little more exploring.  I have to tell you, if you ever take a road trip and your option is the interstate to get to wherever you’re going quickly or two-lane country highways that may take a while longer, remember that (according to that great Hobo saying), a journey is not about the destination but how far you traveled to get there.

A few things I saw on the wandering roads of Georgia and South Carolina… I spent several miles behind a very large pickup with the license plate “COOTER.”

I saw a woman on the front porch of her house – mid-30s, plus sized, long hair – taking a selfie.  No, let me correct that – she was taking a SELFIE, throwing her hair back and bending over backwards as she held the camera up above her.  Damn girl, you go!

I wondered why Baptists seem to like burying people next to parking lots.  It seemed like every single Baptist church I saw along the way – and there were a LOT of them – had a small cemetery next door next to the parking lot.

I, quite by accident, drove through Bamberg, South Carolina, which has a huge sign at the town limits touting the fact that it is the hometown of Governor Nikki Haley.  So later, when she runs for president (and she will) and tells heartwarming stories of her childhood in Bamberg (and she will), I can say “I’ve been there!”

I got to Charleston about 6pm, staying at the Mills House Wyndham Grand.  It was built in 1853 and at the time was one of the city’s finest hotels.  It managed to survive the Civil War including the burning of Charleston in 1861 that reduced pretty much everything around it to rubble.

It’s a nice place, although it could probably stand some modernization/restoration to get rid of the popcorn ceilings in the rooms and 80s era white marble in the public spaces.  My room has a balcony overlooking Queen Street (shut up), which is cuter than the picture I took of trash cans. 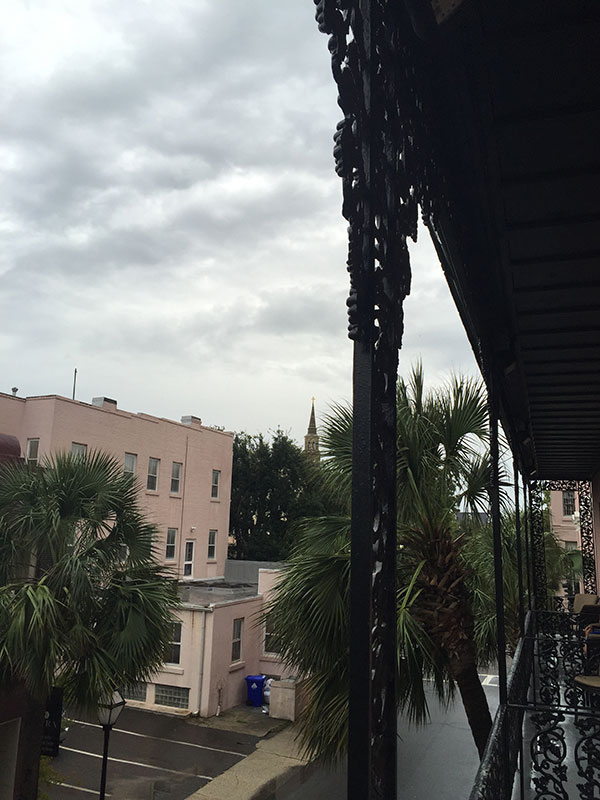 Because it still hadn’t started raining yet, I took a walk down to my dinner spot for the evening, Hall’s Chophouse.  It’s only been around for a few years but the family it comes from has quite a pedigree, managing restaurants and food operations at ritzy hotels around the southeast for 40 years.

As I walked in, a man walked up to me, extending his hand with a smile and a “how you doing?”  I thought he had mistaken me for someone, but no… that was Billy Hall, Jr., one of the two brothers that run the place now.  He thanked me for coming, took my umbrella, walked me all the way to the back of the place to show me where the bathroom was, and stopped by the table several times to see if everything was all right.  It wasn’t me… he and his brother did that with everyone they didn’t know.  The ones they did know, got a huge “Hey!” and a hug.

Being from Los Angeles and averse to any human contact that doesn’t involve screaming at people who won’t go faster on the freeway, I was immediately suspicious.  I think they’re hiding something.

Anyway, the food… unbelievable.  As y’all probably know, I write about Las Vegas, so I have eaten at more steakhouses than I ever care to think about.  This one could kick the ass of just about all of them.

They had an onion soup that came with gooey gruyere, scallions, and topped with french fried onion straws.  Absolutely the best version of this dish that I have ever tasted. 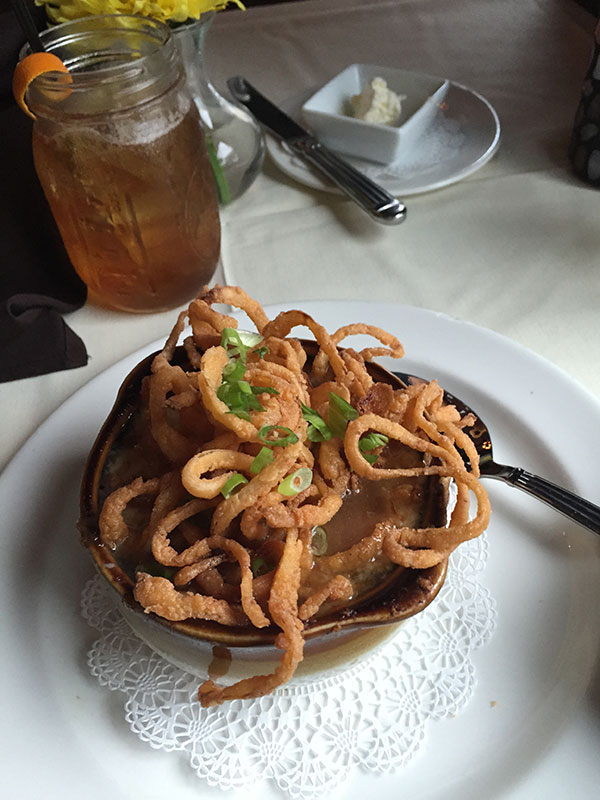 For my main course I had a bone-in filet that I would probably rank in my top three of the best steaks I have ever tasted in my life.  Tender, juicy, flavorful – that bone-in thing really added to it I think – with a smoky, vaguely peppery flavor.  Man that was a good steak. 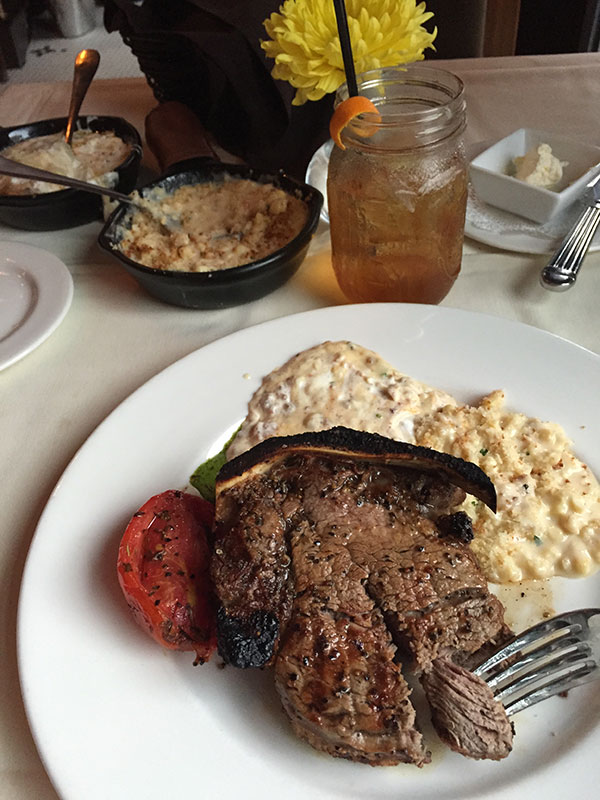 Sides included pepper jack creamed corn, which is exactly what it sounds like and exactly that amazing, and loaded mashed potatoes.  There was bacon in it. Not cheap but totally worth it.

Oh, and in case you’re wondering… no, I can’t eat anywhere near all of anything that I am taking pictures of.  I managed to get about halfway through the soup, maybe a third of the way through the steak, and was only able to have a few bites of the sides.  And yes, I feel like crap after every meal, but darn it, I’m enjoying them while I eat them!

I wandered down King Street on the way to and from the restaurant, one of the main drags of Charleston.  It’s lined with shops and restaurants and is cute, but a little too mainstream for my tastes.  There are a few indie stores and galleries, but most of it is Urban Outfitters, H&M, and Chipotle.  It’s like those suburban malls that are done to look like an old downtown street scene (The Grove or Americana in LA or The District or Downtown Summerlin in Vegas) only somehow less interesting because they took actual old, interesting buildings and slapped giant GAP signs on the front, covering the interesting architectural detail.  In a way, it has the exact opposite of Broad Street in Augusta.  That one needed a scrubbing, this one was a little too well-scrubbed. 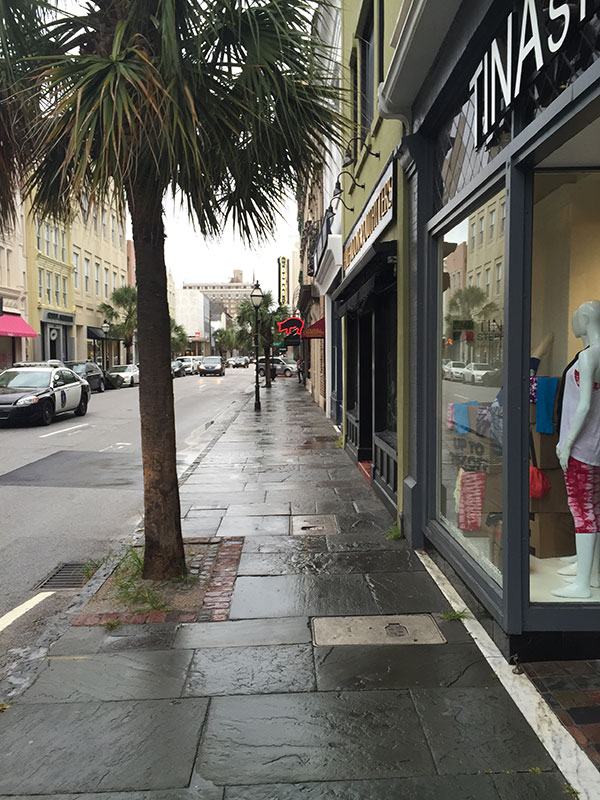 But that was just one street and there is much more to explore, hopefully tomorrow but we’ll see.  The forecast is calling for severe storms and torrential rains, some of the leftovers of Erika, through tomorrow afternoon so I might be seeing Charleston from my balcony until it clears up.   More tomorrow.