Southern Fried Road Trip Days 3-4: Did I Mention It Rained a Bit?

I managed to have miraculous timing last night in terms of avoiding the rain.  As I mentioned, it was pouring on the way over here but then broke so I was able to go out for dinner.  Snapped a few pics on the way back.  Pretty churches… 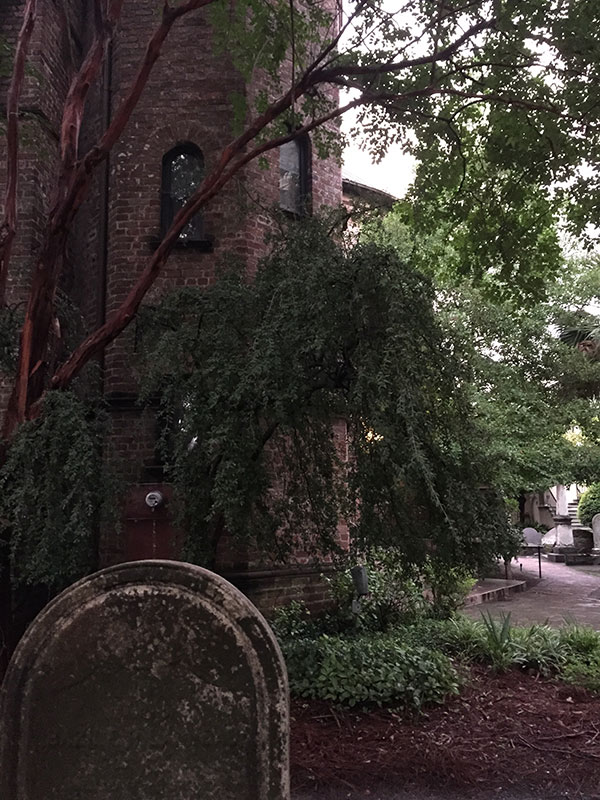 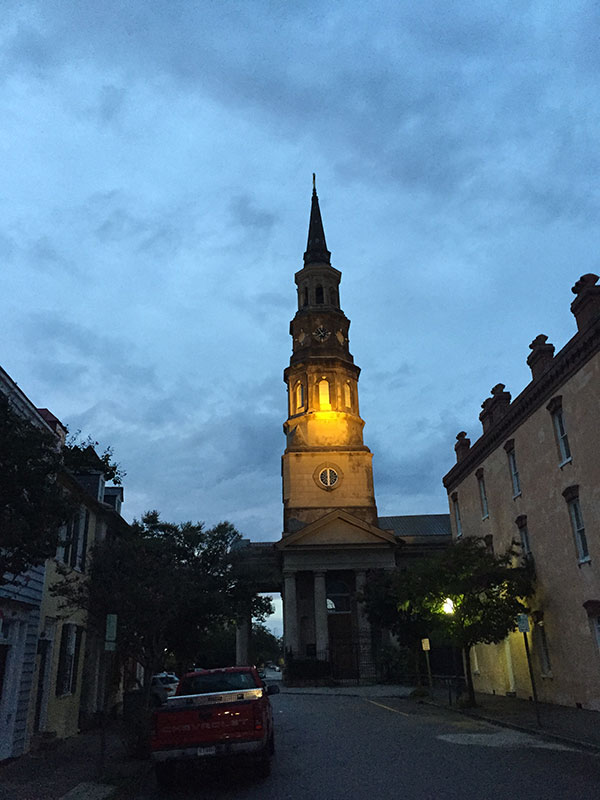 But then it started raining again and I”m not just talking about a sprinkle here and there I’m talking cataclysmic type rain.  My phone kept going off all night with weather alerts for flash flood warnings.  In the end, parts of Charleston got more than six inches of rain – an all time record – and caused quite a bit of flooding, although not where I am staying.  You can see some pictures here.

It lasted until late morning and then blew out over the ocean, leaving it hot and muggy – hotter and muggier than it normally is this time of year here. 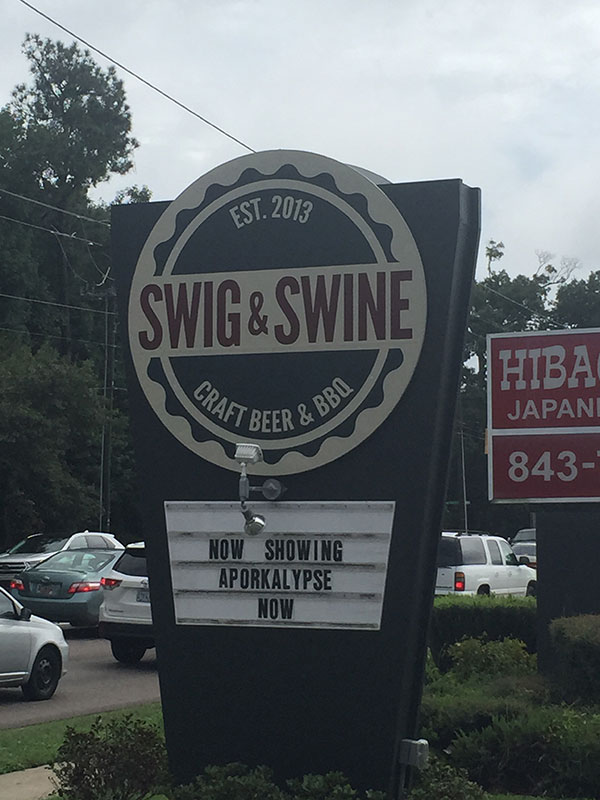 I got a platter with smoked pork belly, burnt ends, Brunswick stew, and baked potato salad.  I urged them to give me small portions of everything because I knew I wouldn’t be able to eat it all and this is what they delivered to the table, saying “We cut it down for you…” 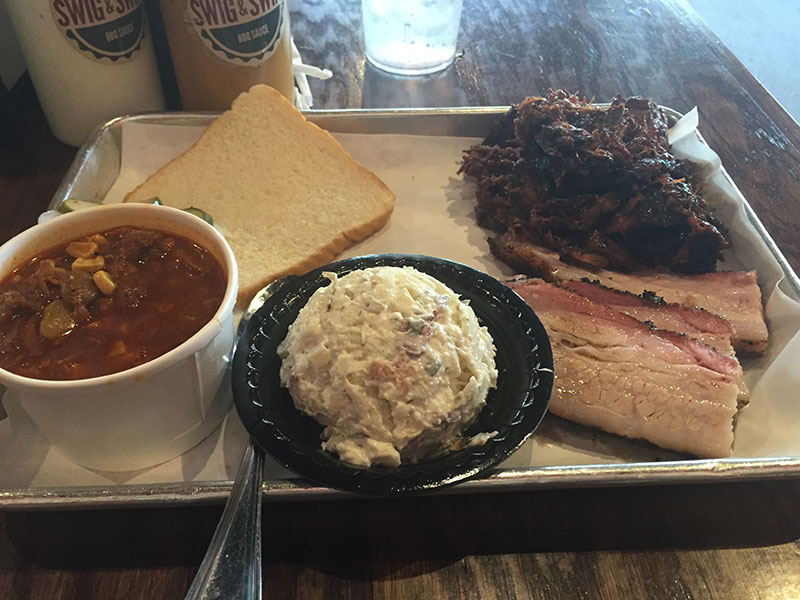 Um.  Yeah.  The stew was perfect!  The baked potato salad, amazing.  The pork belly was a little fatty, which it always is, but more so than usual and not fantastic.  The burnt ends were stupid good.  They had four different kinds of sauces – vinegar, sweet, mustard, and white – sort of a horseradish kind of thing going on.  Next time I’m going to go for the sausages, which looked delicious on the plate of the person sitting next to me.

After that it was time to go explore Charleston and I was reminded, yet again, that I am two days shy of my 49th birthday, totally out of shape, and saddled with a gastric system that seems to think that I am its enemy most of the time.    I walked probably 3 miles last night to and from the restaurant and at least another 4 or 5 today and I kind of want to lay down and not get up again for a week.

But I saw and did a pretty fair chunk of what I wanted to do.  I strolled up Meeting Street, also known as the Museum Mile, and stopped first at the Charleston City Market, in business in one form or another since 1804. 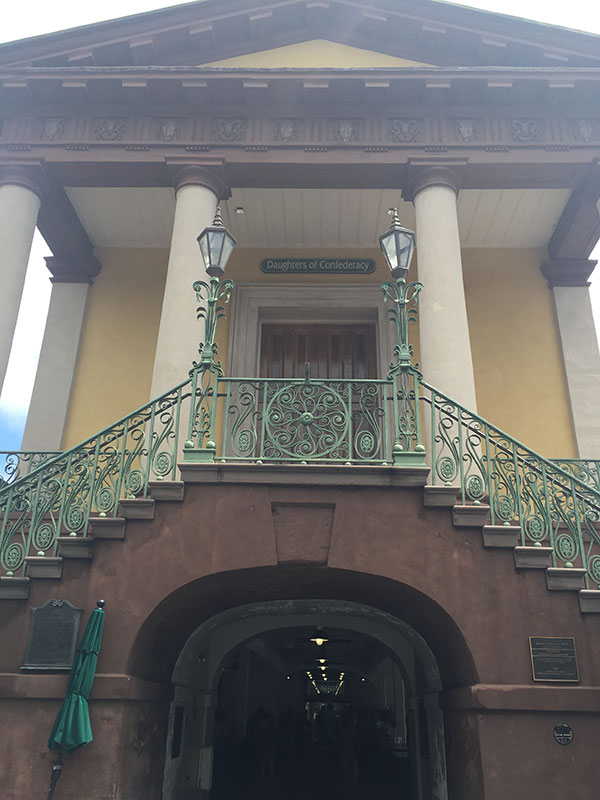 It’s got several blocks worth of vendor stalls selling everything from souvenirs to books to soap to crafts and beyond.  This being a Monday in what they call their slow season, about half of them were empty – mostly where the farmer’s market type food goes on weekends and peak times.  Most of what was there was overpriced tourist trap type stuff, but it’s still a cool facility worth a stroll through.

In the window of a neighboring wine and spirits store, the Second Best. Sign. Ever. 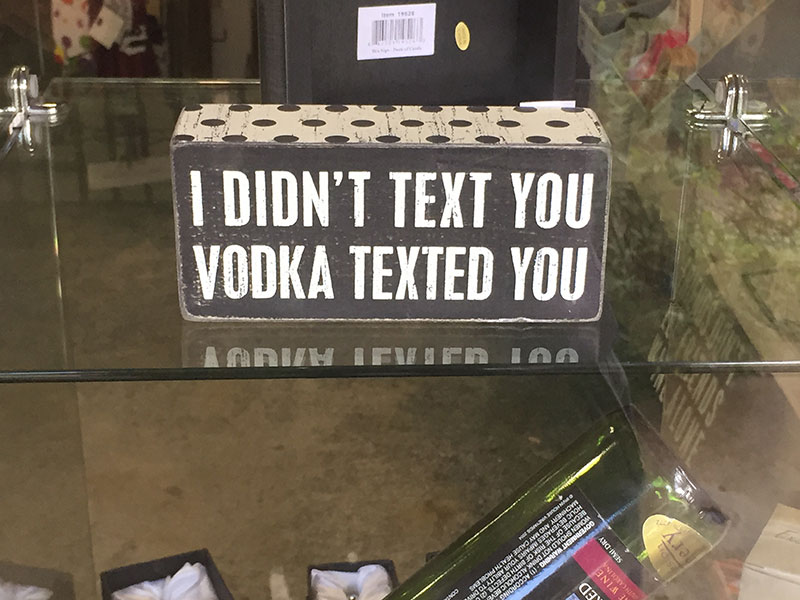 From there I went to Charleston City Museum and got tickets to both it and the neighboring Joseph Manigault House.  The latter was first on the docket, from the outside looking a bit like Murder House from “American Horror Story” no? 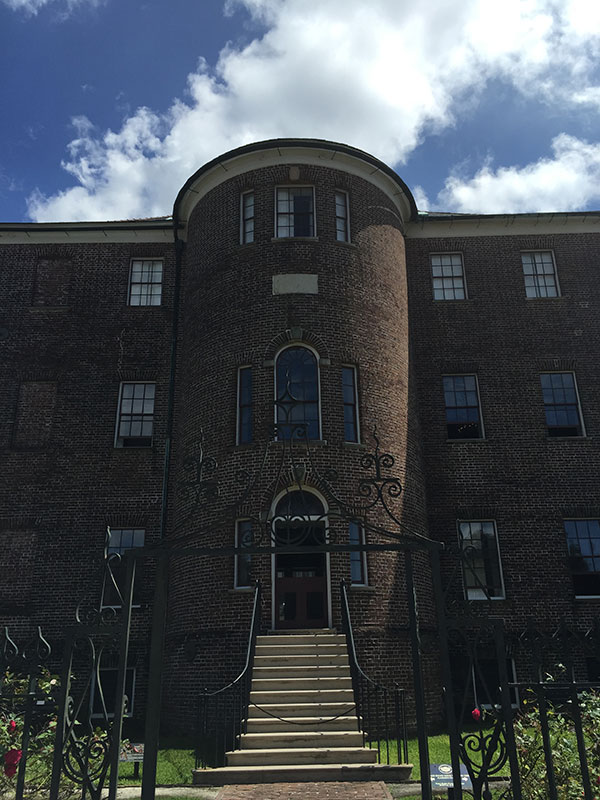 It was built in 1804 by a guy who had inherited his money from a line of rice field and ship owners and used as the in-city home for entertaining and during the times of year they didn’t want to be at the plantation.  Federal style, about 9,000 square feet, and very well restored with lots of original detail including the beautiful chandelier above the 3-story main entrance. 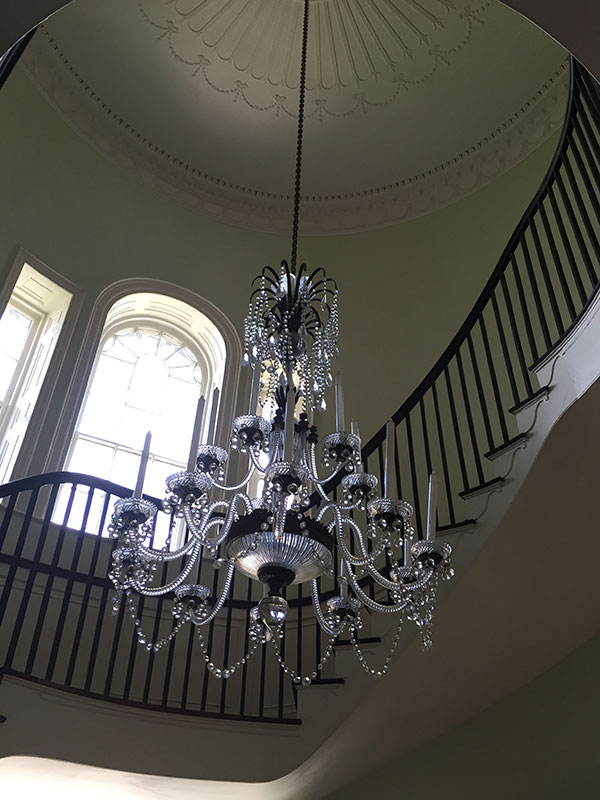 The house had an interesting history.  After the Manigault’s sold it, it eventually became a tenement house, had a gas station built on its front lawn, was home of the local USO, and then eventually donated to the Charleston Museum by a princess.

Next door, the actual museum, in a more modern (read: boring) building. 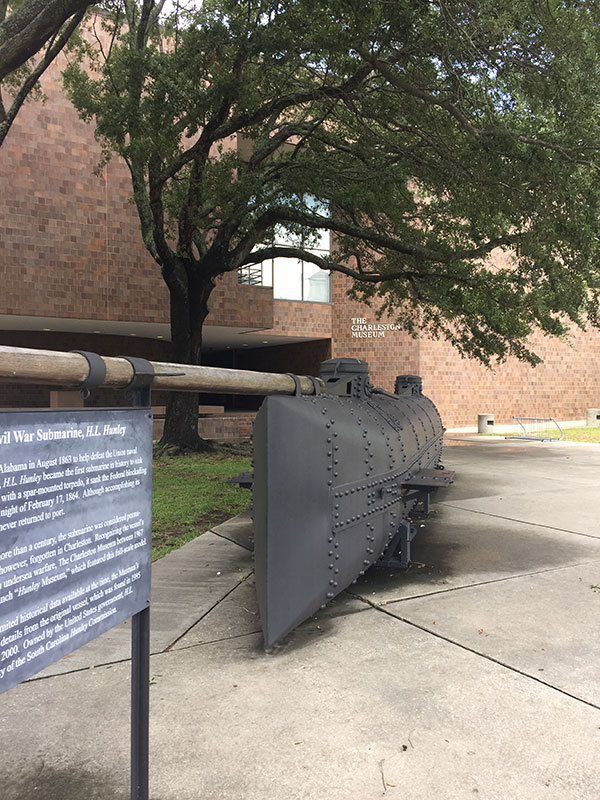 It offers a pretty comprehensive look at the history of the city, from its founding as a walled fortress through the Civil War (sorry, the “War Between the States”), and into the 1900s.  It was mostly stuff in glass cases with things to read – not much interactivity – so I buzzed through it pretty quickly.

It was right around here that my body started rebelling so I made it back to the hotel and took a break.  I did snap a few more interesting pictures on the way of a pretty street (there are lots of them here), a cool old theater, and the Charleston Bay. 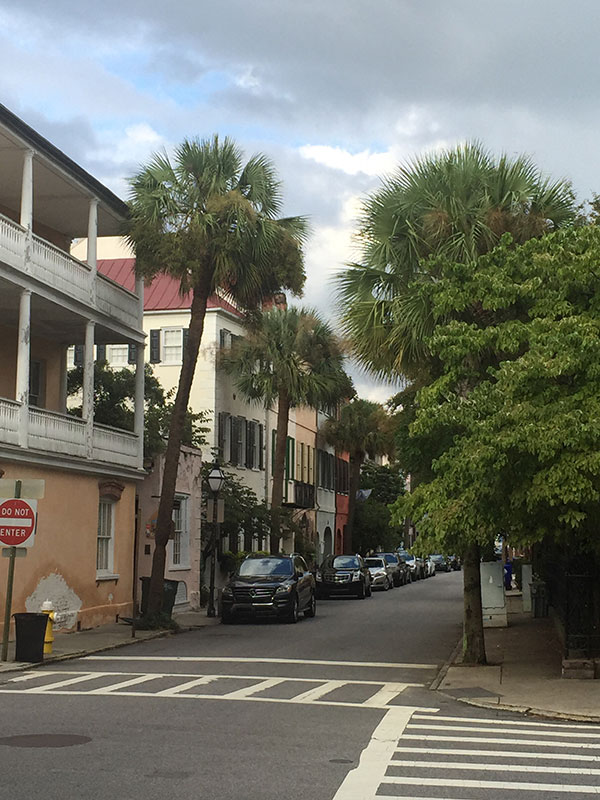 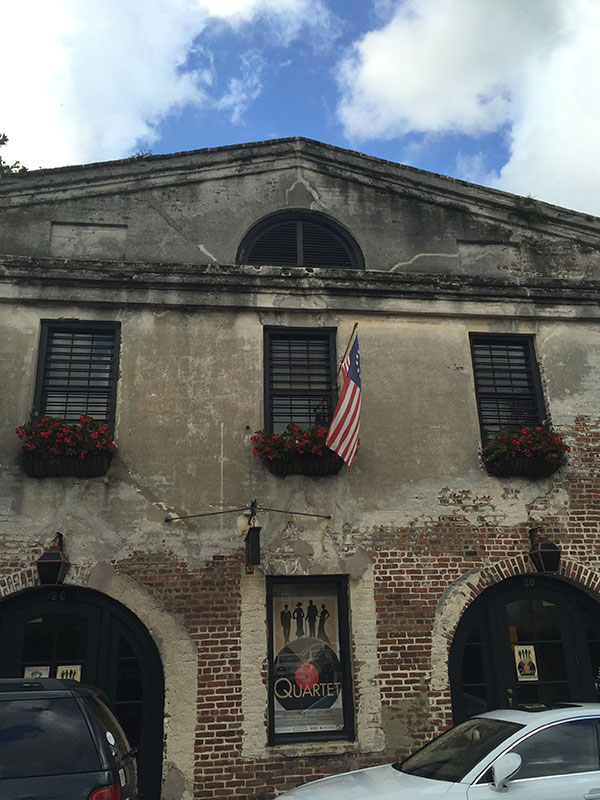 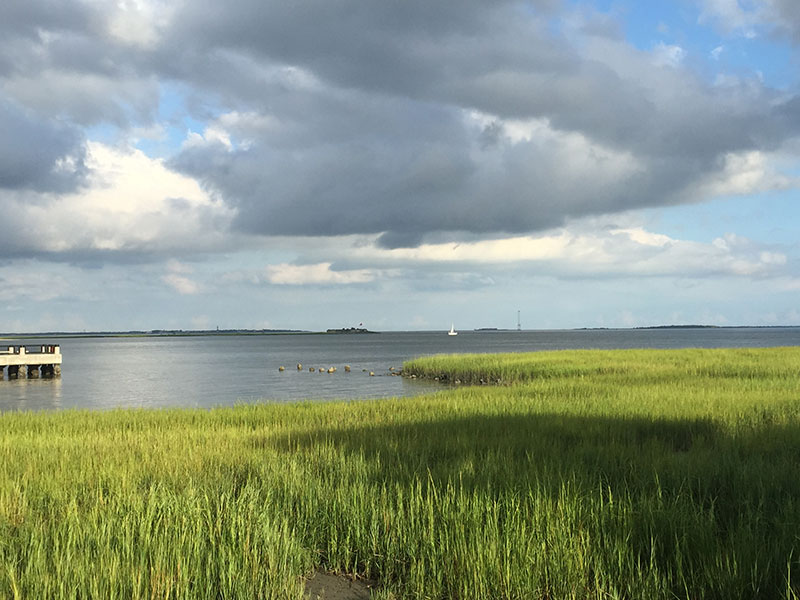 Eventually I went for dinner at Magnolia’s, a bit of a Charleston institution for the last 25 years.  Upscale low-country is what they call the cuisine.  I started with the Down South Egg Roll – collared greens, chicken, tasso ham, red pepper puree, and spicy mustard all stuffed into a traditional egg roll shell and topped with a peach chutney.  Damn!  That’s about as perfect of a dish as you can get, right there, my friends. 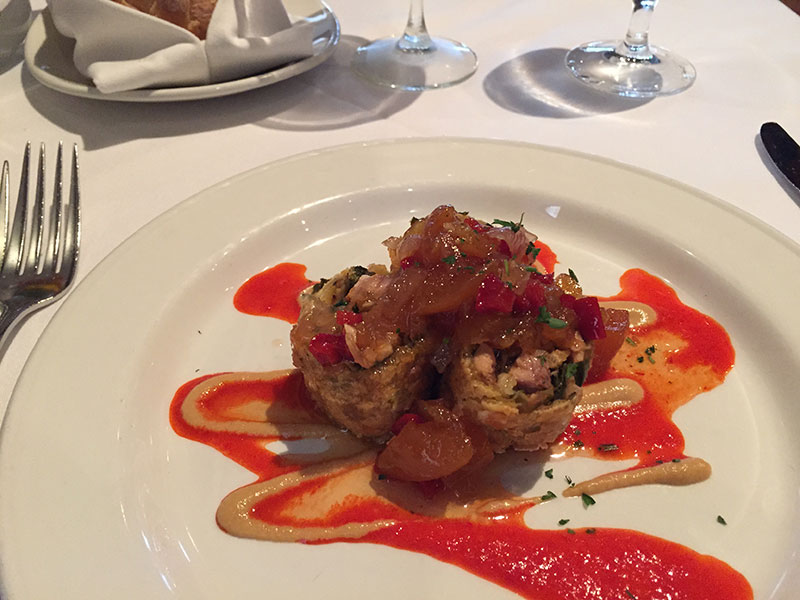 For the main course I did fried chicken with mashed potatoes, collared greens, and summer corn.  The chicken was good, not great – a little dry – but that corn?  I could’ve eaten that all day. 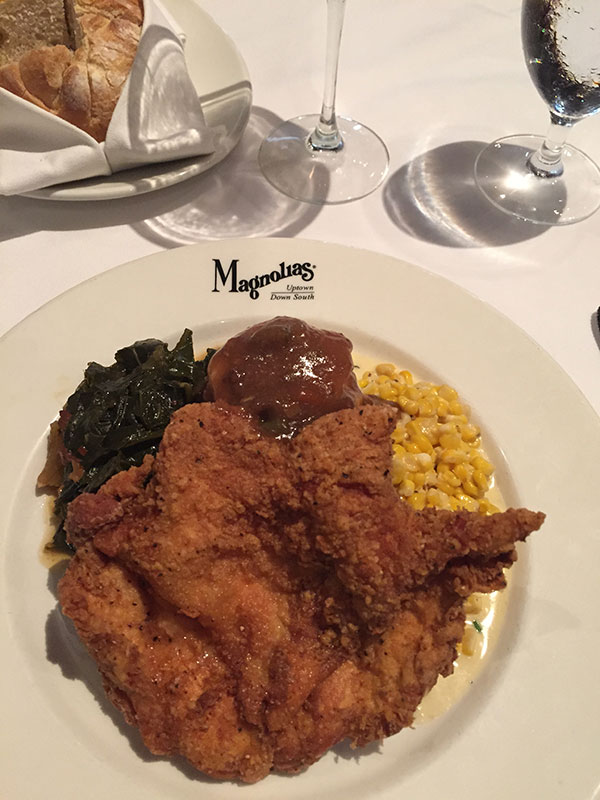 Tomorrow is more Charleston only with a LOT less walking and a lot more sitting on my balcony reading a good book.