Southern Fried Road Trip Days 6-7: It’s My Birthday and I’ll Drink If I Want To

And I wanted to.  I went out last night for a few cocktails, which should surprise absolutely no one who knows me.  It’s pretty quiet here in Savannah this time of year so the bars were not terribly busy but I still managed to find some fun.  Vodka helped.

On my way back to the hotel, I snapped a bunch of great pictures of eerie Savannah at night.  Here’s a couple… 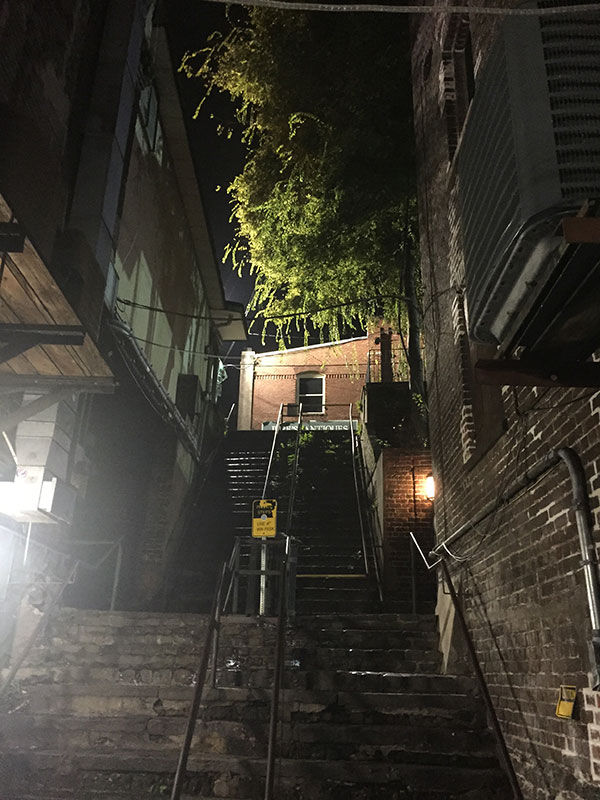 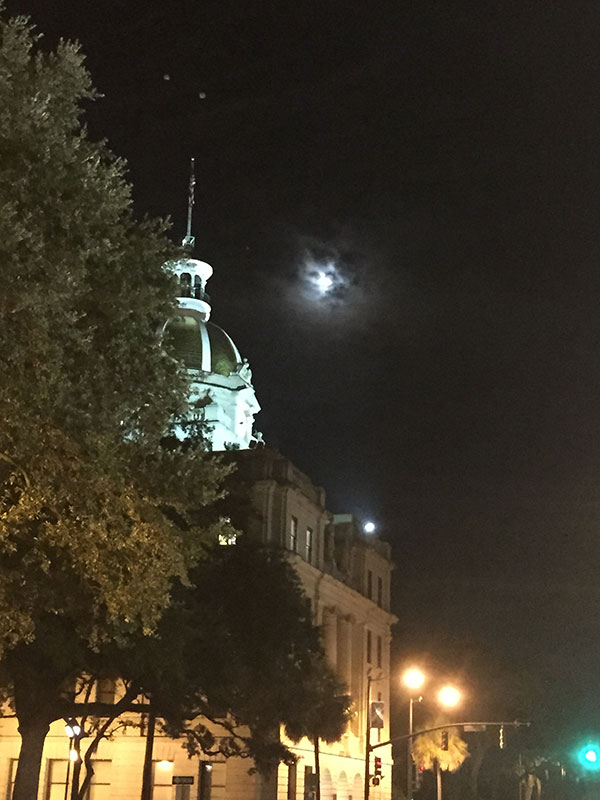 Speaking of eerie, the hallway in my (supposedly haunted) hotel.   Is it wrong that every time I walk down it I hear two little British girls saying “Come play with us Danny… forever… and ever… and ever…” 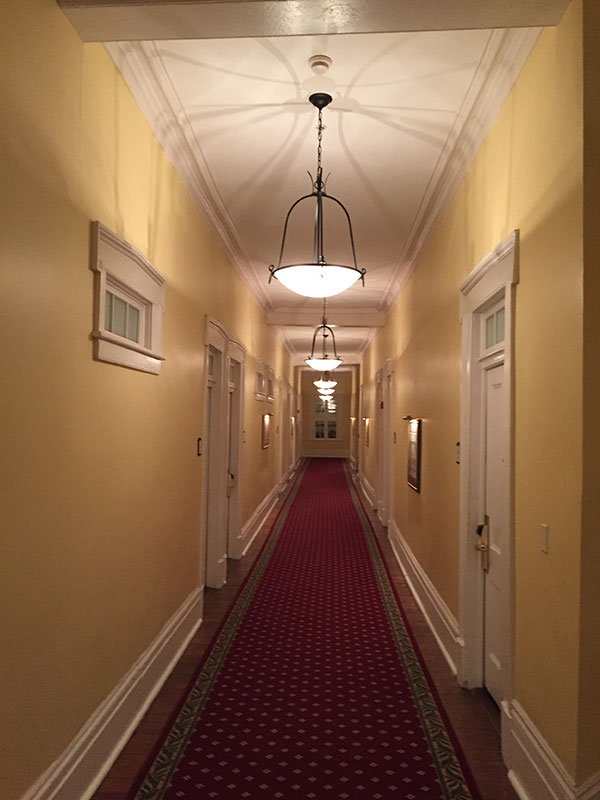 Anywho… I got up early this morning to go to the first of two photo shoots I have arranged to get author photos done for my book.  Unfortunately it was raining so we postponed it until tomorrow.  So I’ll be doing one in the morning and one in the afternoon.  At any moment now I’m going to start stressing about what to wear.

So it was back to bed with me, where I lazed until 10-ish (good for me!) and then finally hauled myself up to go attack the day.

First on the list was to complete my Savannah Historic Squares tour.  Yesterday I did 13 so that meant there were 9 left to go.   Saving most of the photos for my book marketing push, but here are some good ones of Whitefield, Lafayette, and Troup (where the heroine of my books lives): 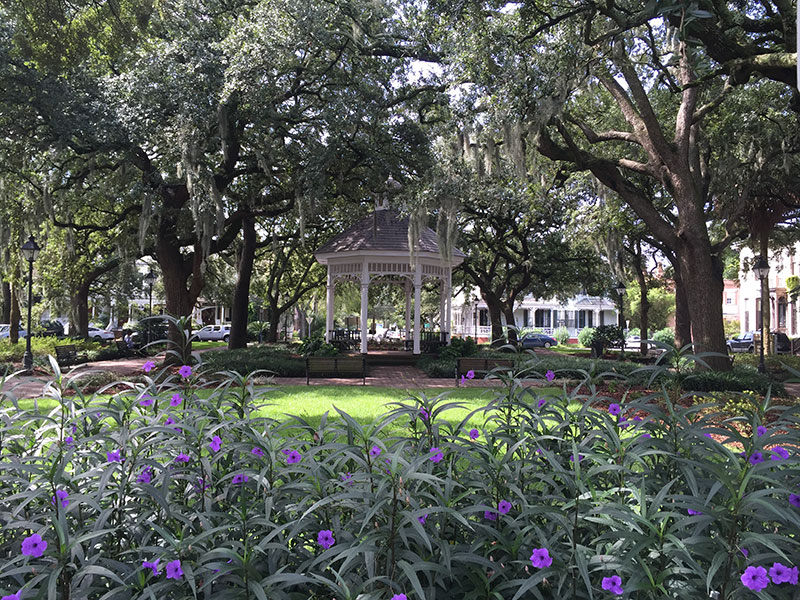 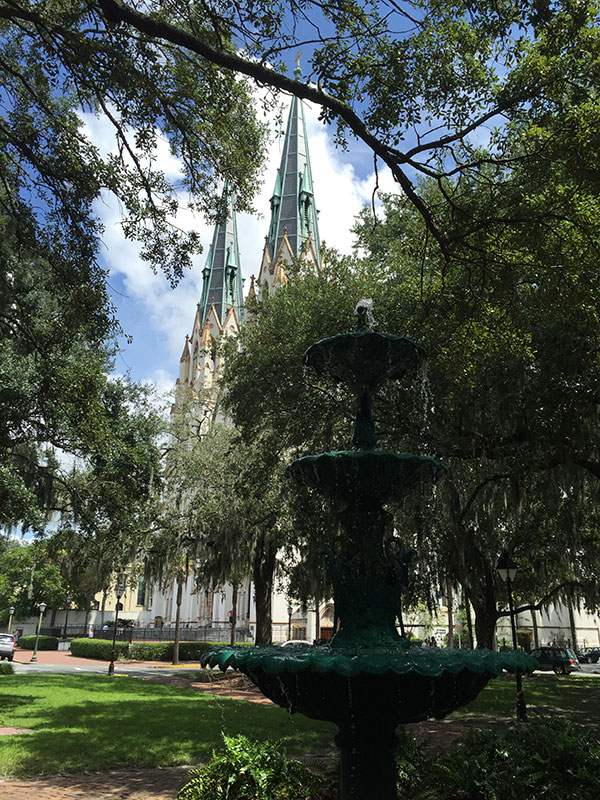 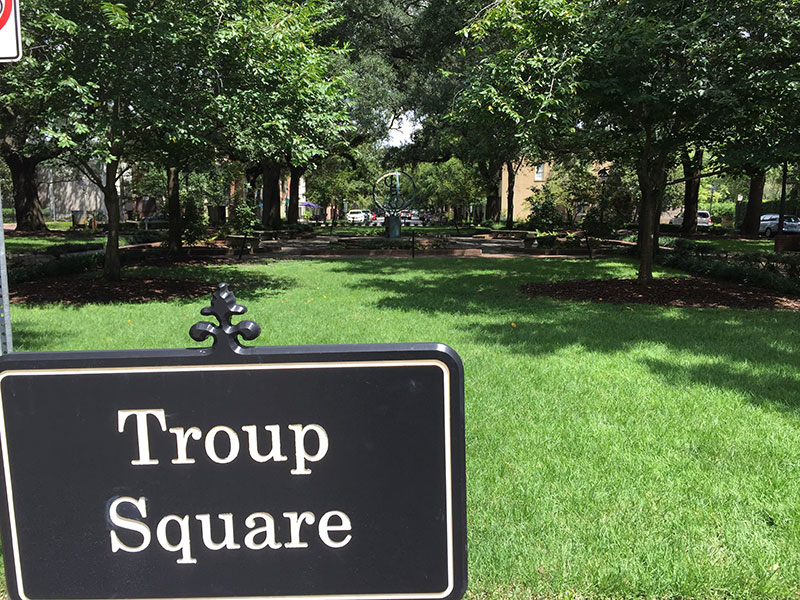 I also wandered by the Mercer-Williams House, the place made (in)famous as the murder scene in “Midnight in the Garden of Good & Evil.” 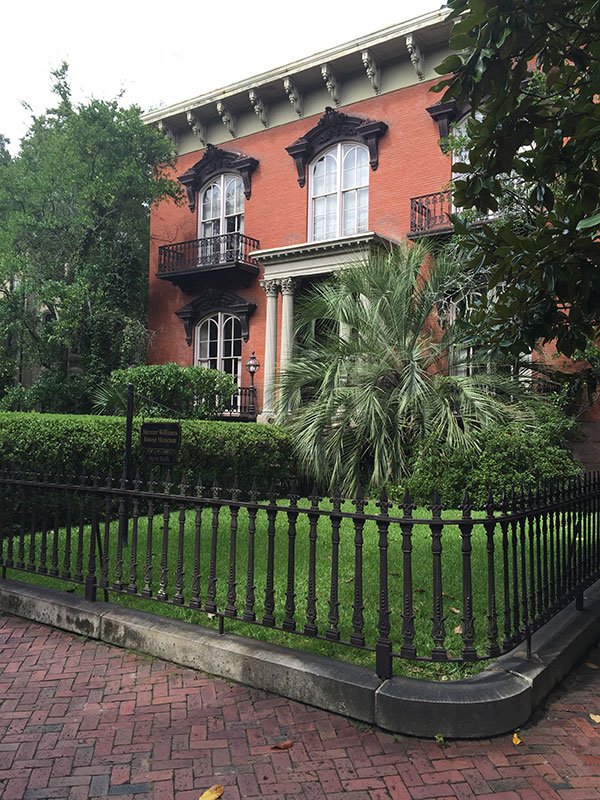 While I was doing the squares, I turned a corner and, providentially I will say, there was Mrs. Wilkes Dining Room.  This is a Savannah institution, serving family style meals of all sorts of different kinds of Southern down home cooking.  Usually there is a line down the block but this time there were only about 30 people waiting – the first rush had already been seated and was being served.  It only took about 15 minutes and I got in and took my seat at the head of a table that looked like this: 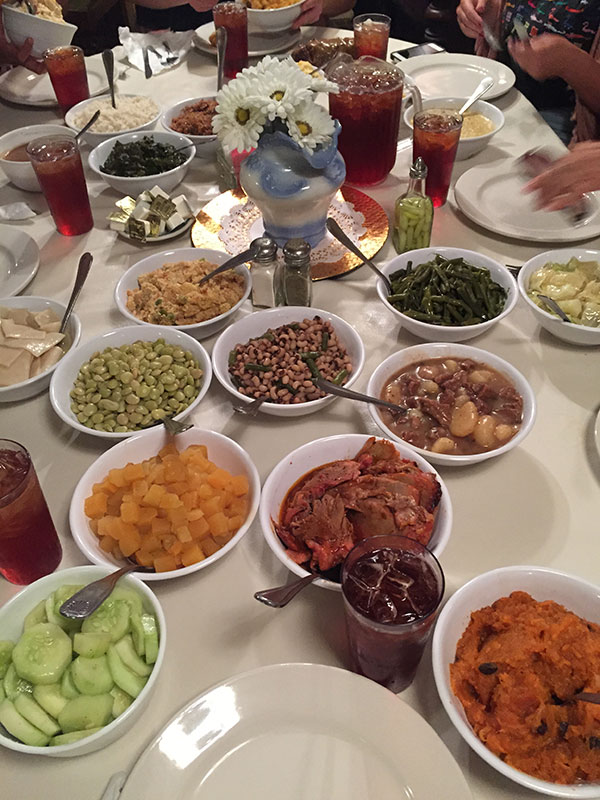 I’m sure I didn’t note it all but there was at least… beef stew, meat loaf, bbq pork, cabbage, macaroni and cheese, butter beans, black-eyed peas (not the Fergie kind), squash, dirty rice, mashed potatoes with cheese and onions, candied yams, pickled beets, red rice, collared greens, okra and tomatoes, potato salad, baked beans, macaroni salad, creamed corn, cole slaw, and corn bread.  And it is worth noting that this is BEFORE they brought out the fried chicken…

They also serve dessert but I wound up leaving before it came, already feeling like my body was going to rebel against all of this rich food.  Good thing, too, because when I got back to the hotel there was this from my friend (who knows me very well) Maureen: 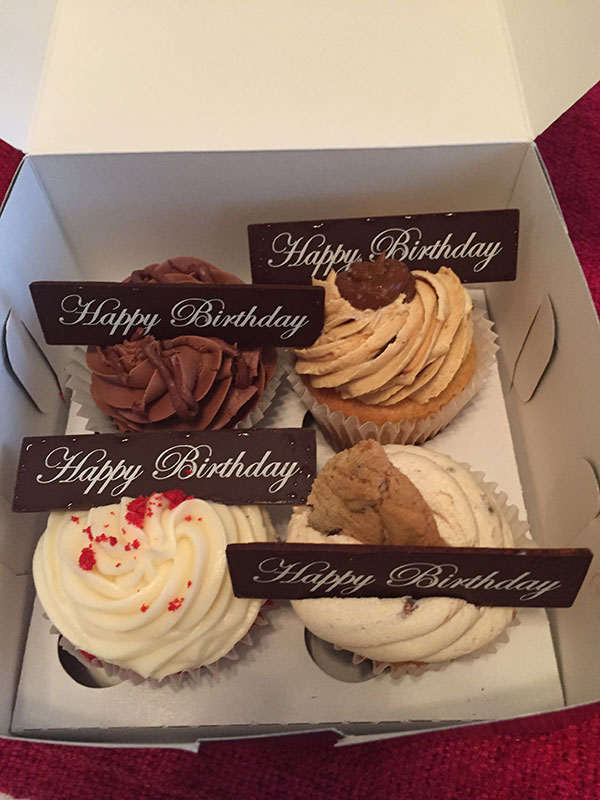 Next on the agenda was Forsyth Park, a big beautiful public space located just north of the Historic District in what is known as the Victorian District for the architecture found on most of the buildings in the area.  This is the park where you’ll find the iconic fountain that you will often see in pictures of Savannah… 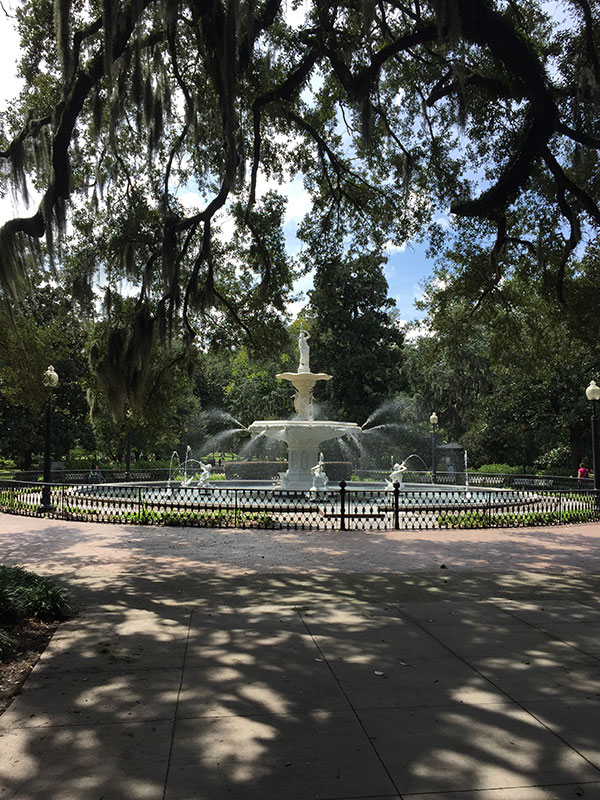 Next it was out to Wormsloe State Historic Site in the Skidaway area of Savannah.

Among the first colonists to the area in 1733 was Noble Jones, a physician, who leased land on the Isle of Hope about eight miles south of Savannah.  He built a house of tabby concrete, with fortifications along the Skidaway River to keep any attackers out.  Not much is left standing of it today but the walls that remain are the oldest known structure in Savannah.

There isn’t a lot so see – the grand main house that Noble’s descendants have occupied since the early 1800’s is not open to tourists – but you do get to enter along another iconic bit of Savannah landscape:

Can you imagine that being your driveway?

You can wander through portions of the estate, see the ruins of the original tabby house, and walk out onto an observation deck overlooking the marshy river… 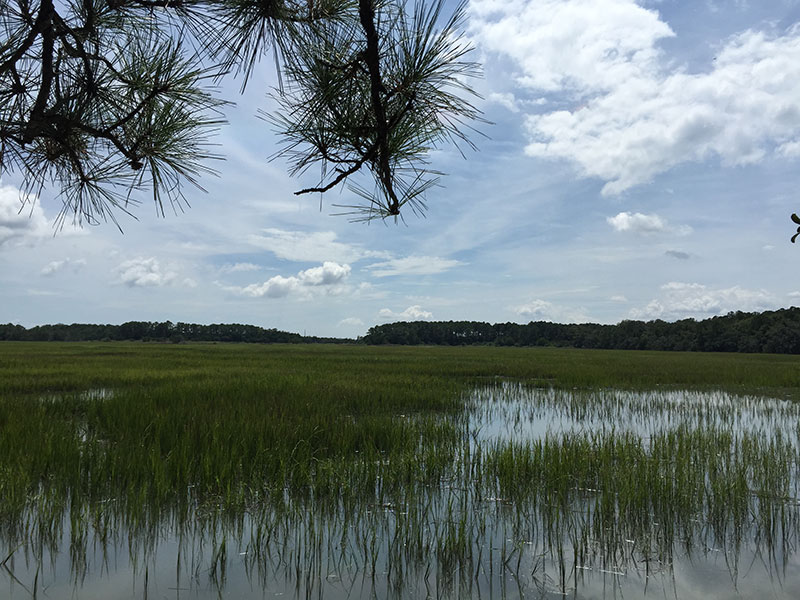 After way more exercise than I ever intended to get (I was hiking through the WOODS y’all!), I came back to the hotel to relax and recharge and eventually headed out for more photos and then to dinner at neighborhood kitchen called the 5 Spot.  They have an eclectic menu but it was their bacon wrapped meatloaf, smothered in Carolina BBQ sauce that caught my attention. 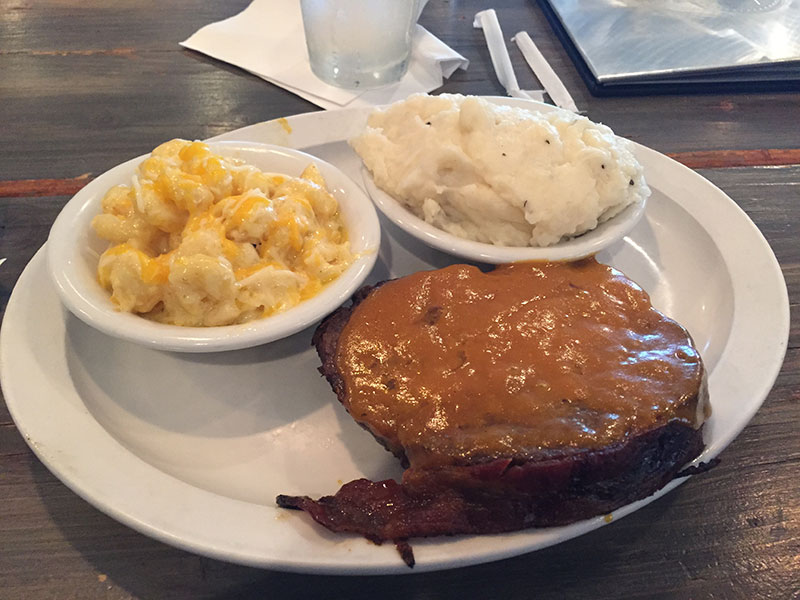 Now that’s what I call eatin’.  It was fantastic and my only regret was that I couldn’t eat more of it – a common regret these days, but whatever.  What I am able to eat tastes good!

Back at the hotel for another recharge and then I’m probably going to go out and hoist another couple to finish off my birthday.

Thank you very much for all of the kind birthday wishes – I really appreciate it.  That and a beautiful day in Savannah is all I need!