One one eye obsessively on The Weather Channel app, I checked out of the hotel on Wednesday morning with a revised plan for the day. Originally I was going to do several offbeat museums in and around Atlanta and Georgia including the CDC Museum, the Waffle House Museum, and the Crime and Punishment Museum (complete with electric chair!). But not knowing what the storm was going to do made me want to just get to Savannah, get checked into the hotel, and hunker down while making a new plan from there.

How does one “hunker” exactly? Whatever.

Since it was kind of on the way, I did go ahead and make a brief stop at the CDC Museum. Well… I tried. It turns out that you are not allowed to drive onto the CDC campus with an open bottle of vodka in the trunk of your car. Or any other kind of liquor for that matter. They didn’t really explain why but I envisioned all sorts of Hollywood level disasters (“How did the level 4 virus get out!?” “Someone brought a bottle of Grey Goose into the parking garage!” “Damn it, man!!”)

So I had to go park in a big shopping complex across the street (CVS on one corner, CDC on the other) and walk in, where they promptly yelled at me that I wasn’t coming in the right way. Something about a visitors’ sidewalk. I don’t know. Anyway, I finally made it inside, had to have a full cavity search performed on me (or perhaps I was just annoyed by that point and it seemed that intrusive), and then was directed to the museum.

It’s basically all about diseases – ebola, typhoid, legionnaire’s, AIDS, you name it – and other calamities that can affect your health like terrorist attacks, nuclear meltdowns, toxic chemical accidents, and so on. Yeah, real cheery subjects. They had a bunch of funky looking equipment that was explained in a way that I think they think made sense but didn’t, really. This thing for instance… 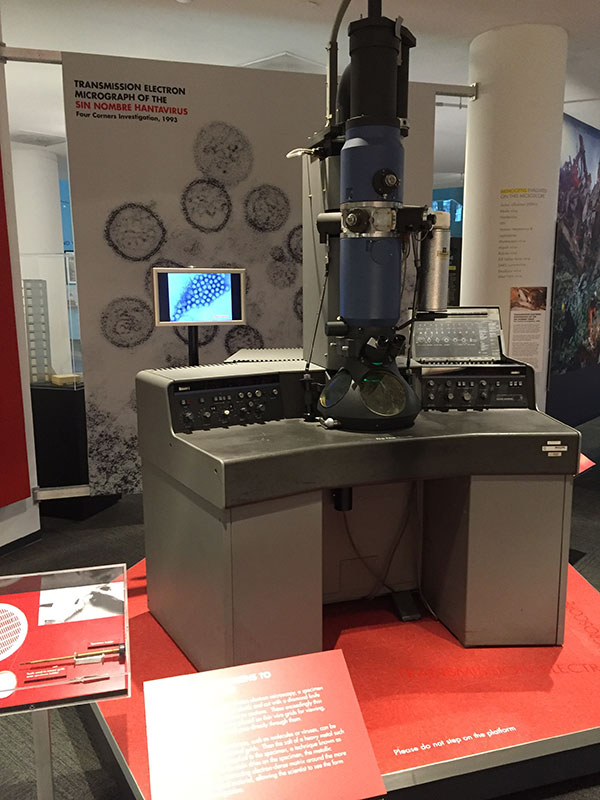 It’s an electro-positronic-dynamic-thingamajig. It does something important I’m sure.

I did enjoy the cheeky artifacts of disease prevention campaigns of yore: 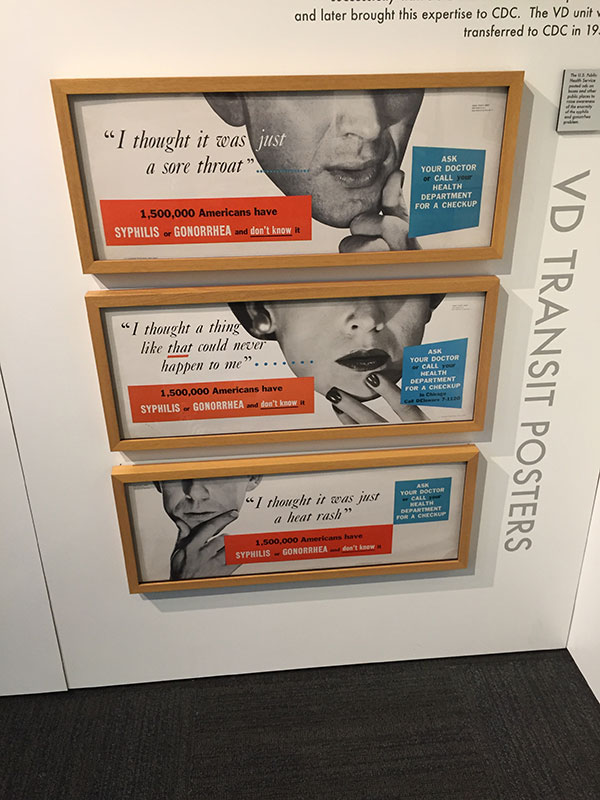 Feeling the need for a Silkwood shower, I high-tailed it out of there and got on the road to Savannah and got into town around 2:30. I’m staying at the Hilton Garden Inn, which has absolutely none of the charm that the hotels that I have been in before did, but it’s clean, it’s comfortable, and I have a balcony that I won’t be able to use much because of all the rain and wind.

I took a walk and then lazed around while the first outer bands of Hermine made their way through Savannah. Rain and wind. Shrug.

For dinner I went to Alligator Soul, a funky little upscale restaurant located in the basement of a building in the historic district. It’s new Southern, meaning updated twists on classic fare. They started me with an amuse bouche of beef tenderloin in a balsamic reduction with garlic and chives and I was indeed amoosed. Then came the warm multi-grain and garlic focaccia bread with lemon herb butter and I was even more amoosed. The main course… a filet wrapped in brown sugar cured bacon and done in a veal demi-glaze, served on a bed of roasted garlic mashed potatoes. I can’t remember the last time I had a steak this good… perfectly prepared, insanely flavorful, slightly decadent with the bacon. I loved it – favorite meal of the trip so far. 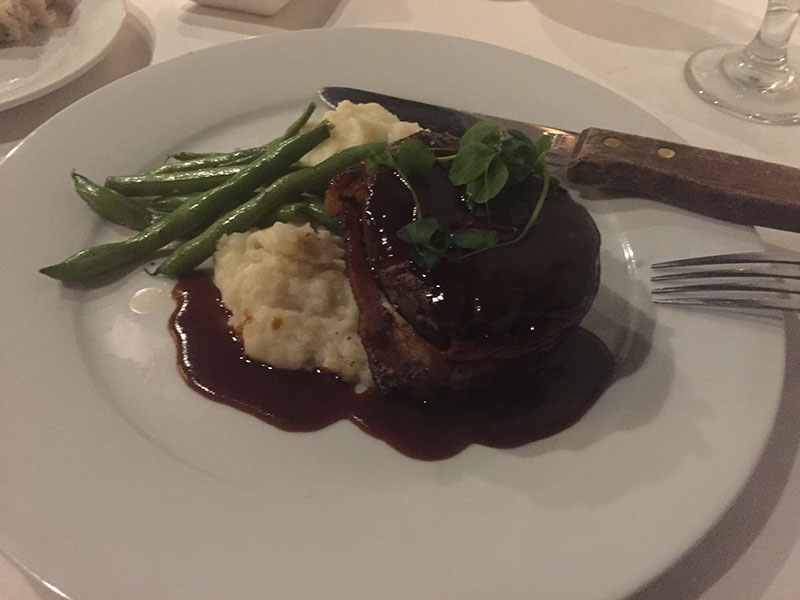 I got an after dinner drink of a white chocolate martini but couldn’t finish it so the waitress said, “You want that in a To-Go cup?” And I said, “I do love this town.”

After dinner I watched it rain a bit more and then headed next door to the local gay bar, which was very quiet until about 40 very drunk, very straight, but very fun Australians on some sort of holiday tour came in. It got loud after that. I didn’t help matters much by buying them all Jello shots. Welcome to America!

Thursday I was going to do the road trip down into Florida but the weather was just too dicey so I stuck around Savannah and tried to get some of the things that I was going to do on Friday accomplished a day early. I went out to Tybee Island to visit the museum that was closed off when I was in town last year but made a stop at the lighthouse across the street first just to see if I could get some good pictures of the storm coming in. 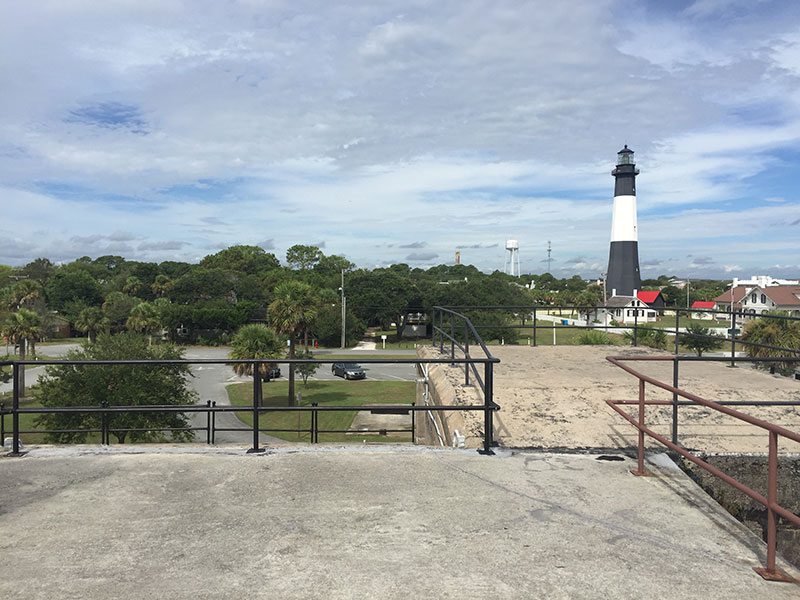 I’m not sure what made me think that my reaction to going to the top of the thing and out onto the tiny little catwalk that surrounds it at the top would be any different than the last time but I assure you it wasn’t. I took one step out there and immediately freaked the fuck out, almost fell to my knees, and practically had to crawl back inside. This photo was taking through a window from the interior of the lighthouse. 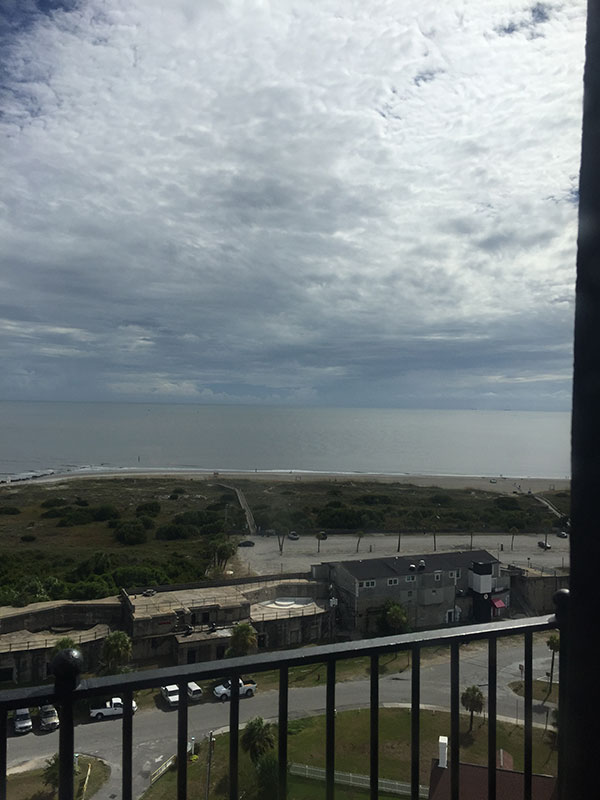 The museum is located in an old battery garland along the beach that dates back to the 1800s. Although not the most contemporary of museums in terms of presentation, it had a fascinating history of both the military and civilian lives of the island through the years. The area peaked in the late 1800s and early 1900s when Tybee was a major resort destination, with grand hotels, bathhouses, beachside pavilions, and amusement rides. As with most things built of wood in that era, a big chunk of it burned down and although some of it was rebuilt it never really regained its appeal, especially with competition from nearby Florida beach communities reaching their zenith. 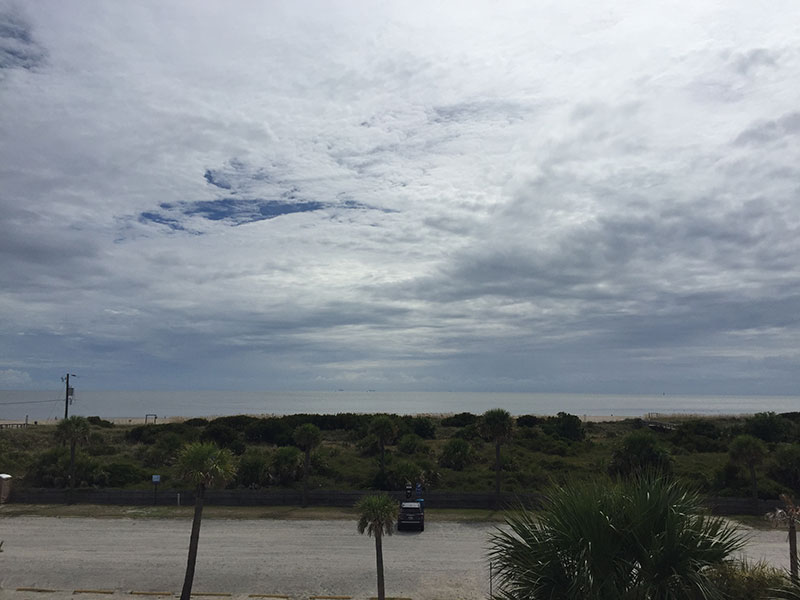 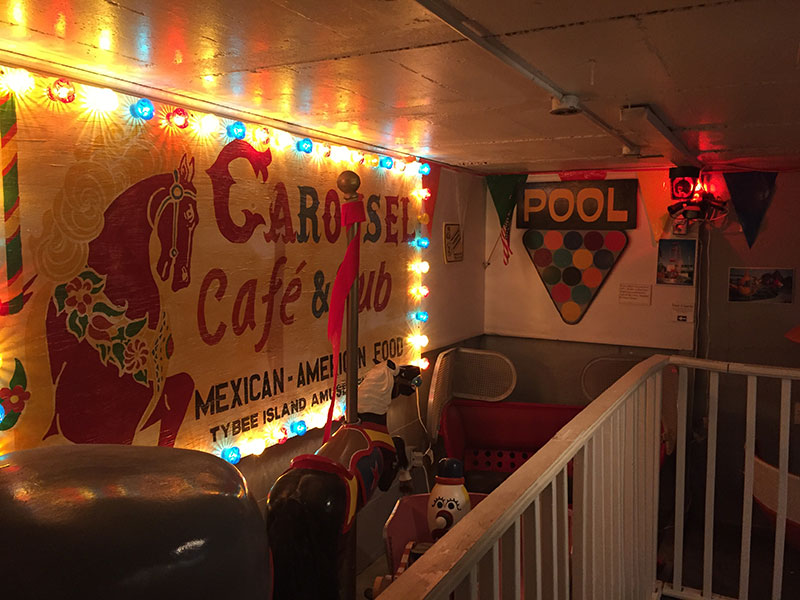 One of the things that fascinated me was the Hotel Tybee, the grandest of resorts originally built in 1889. It was a beautiful Victorian structure that burned down in 1909 and was replaced by an even more grand cement one in 1911. The bulk of the hotel is long gone, torn down in 1961, but I went to where it was anyway and the hotel that sits there now – a boring modern thing – had some books about the island and the hotel so I can binge a little on history. I think I’m going to put it into one of my Interitas novels.

Right next door is a foodie famous place called The Breakfast Club, which is only open from 7am until 1pm and, unsurprisingly, serves (mainly) breakfast. This place is such a destination that the last two times I have tried to visit the lines were wrapped around the block to get in. Since I was there late on the day before a tropical storm was set to roll through, I was able to get in quickly and have a seat at the counter for a late breakfast/early lunch. I got their Philly cheese steak omelette – tender chunks of top sirloin with onions, mushrooms, and cream cheese. It was an interesting mixture that took me a moment to get used to but I got there quickly and enjoyed the hell out of it. 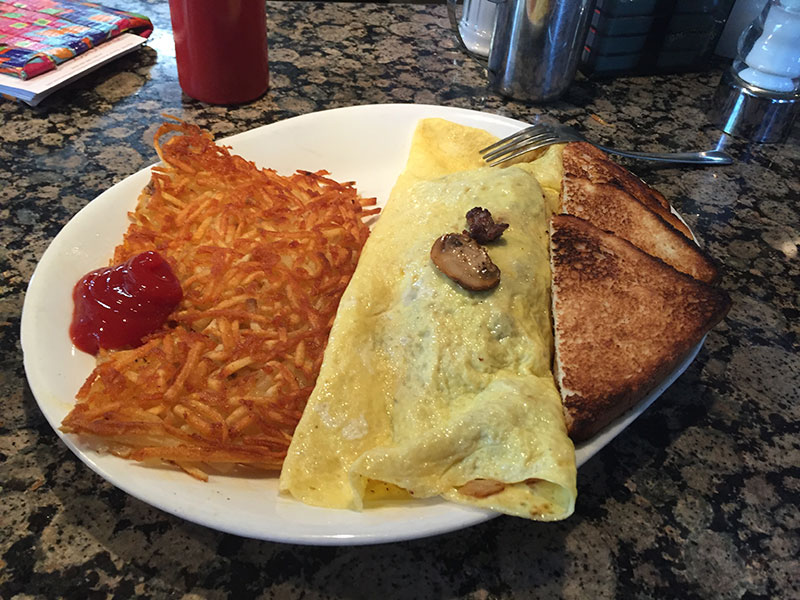 Afterward I tried to swing by to get a picture of Scary Mary, a statue of the Virgin Mary that sits in a window at a local church but it’s also a school and it was in session so I didn’t feel comfortable going onto the grounds to do it. She will be in one of my Interitas stories as well, so I will get her before I leave at some point.

Another line of storms moved through and then it cleared out so I went over to River Walk to sit, read, and enjoy a cocktail (or 3). Peach vodka, lemon juice, simple syrup, and a few other things I have forgotten. Yum. 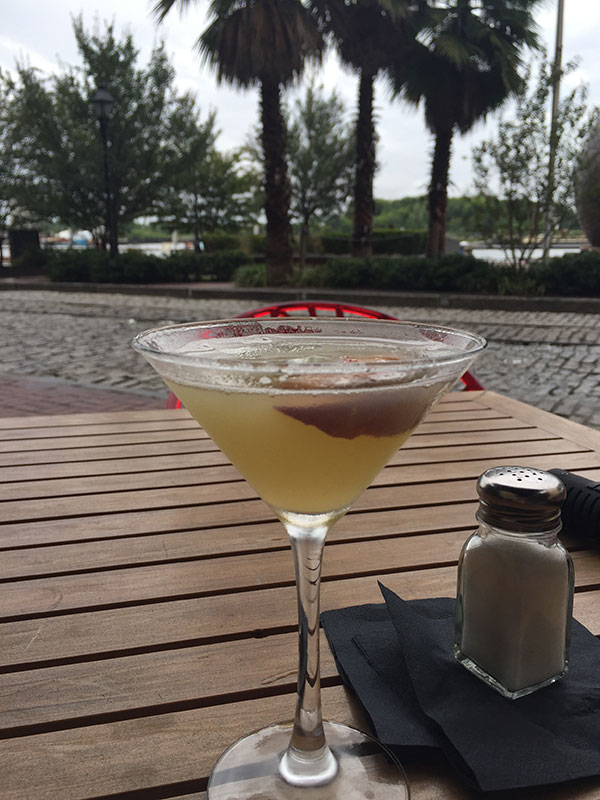 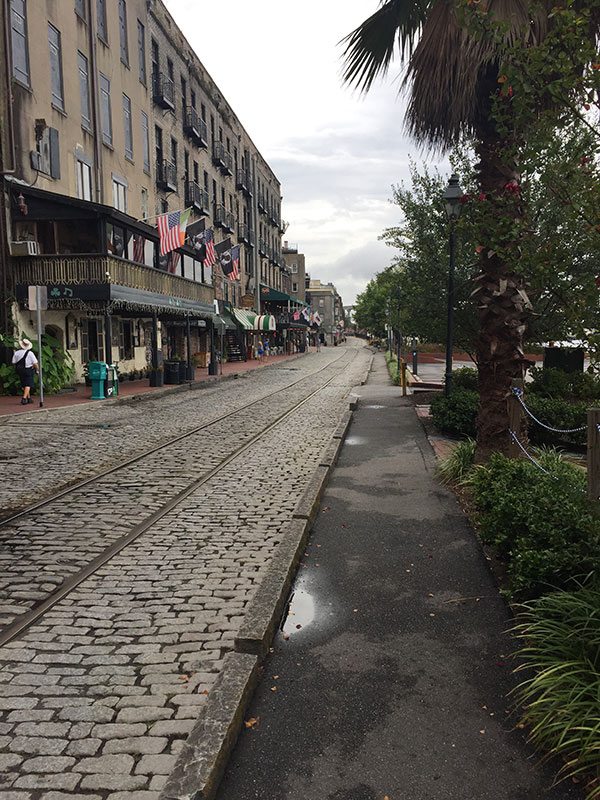 For dinner I visited another new Southern restaurant, A.Lure. They had amazing biscuits before the meal with “pina colada” jam and I had their meatloaf for dinner – ground filet mignon, foie gras, and caramelized onions with fingerling potatoes and chunks of blue cheese. I forgot to take a picture of it before it was half destroyed… 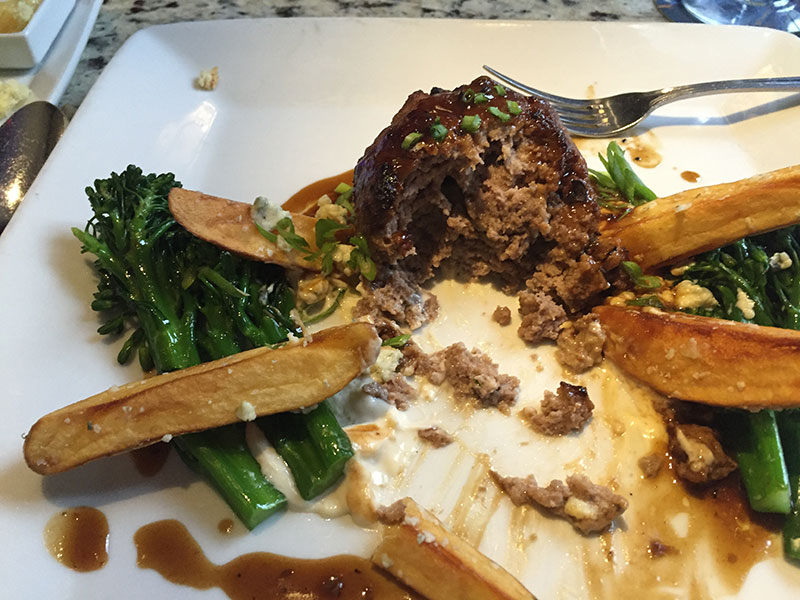 The only reason I am not raving about it is because the steak the night before was still lingering in my memory, but it was very, very good.

As the first serious parts of the storm rolled in I went back to the bar and had a few drinks while watching a drag show. One of the ladies wanted to know why they only gave boring white people names to hurricanes. If she was in charge, she’d go ghetto fabulous and do things like Laquisha and Shanaynay. I am now obsessed with this idea.

Hermine really started hitting overnight, with a lot of rain and a lot of wind and a few thunderclaps that were loud enough to shake me out of bed, but for the most part it has just been a bad storm. It is looking like the bulk of the bad stuff is skirting to the west of Savannah so right now as I type this, when the eye is passing nearby, it’s just heavy rain and gusty winds and not much else – nothing like the damage and flooding that she wreaked in Florida.

Once the storm passes later this afternoon, I’m going to try to get my Savannah visit back on track. They did cancel Baconfest for tonight, but are still on for tomorrow and now Sunday as well. The Lady Chablis show was cancelled for tomorrow night so that’s a bit disappointing but I’m going to go see a local revue instead.

Off to come up with good drag queen names for hurricanes…