I really need to learn how to be the type of person who can go to a place and just enjoy it, rather than looking at everything and wondering how I’m going to describe it later. It’s the travel writer in me, perhaps yearning for a chance to write about something other than Las Vegas. Don’t get me wrong, I love writing about Las Vegas, but there are so many ways I can describe a buffet or a white tiger.

So here I am on my annual trip to Chicago and here I am writing about it. I hope you enjoy.

I got in late Thursday night after an uneventful flight. I had splurged on first class, just because, and while it is certainly better than economy, this particular plane was not exactly posh. Comfortable, but probably not worth the extra dough I spent. Oh well, at least the movies were free.

“Cake” with Jennifer Aniston. Darned good flick, by the way.

Traffic from the airport into the city is always a nightmare – like, worse than LA traffic believe it or not. An 18 mile trip took me about an hour and forty minutes so by the time I got to the hotel all of the life had been sucked out of me.

I’m staying at the Congress Plaza, which in its day was undoubtedly a stunning place. It was built in 1893 and then expanded in 1902 and 1907 to have more than 1,000 rooms, making it one of the biggest hotels in the world at the time. The location is pretty amazing, on south Michigan Avenue right across the street from Grant Park. I have an incredible view of Buckingham Fountain, which you will know if you ever watched “Married, With Children,” and beyond that Lake Michigan.

The problem is that this grand old dame has seen better days. The carpeting is threadbare in spots, the wallpaper is scuffed and torn here and there, and someone thought it was a good idea at some point in its history to put in acoustic popcorn ceiling tiles and harsh, white fluorescent lights in the halls and other public spaces. The elevators are best described as rattletrap (and break down frequently) and the fire doors between various sections of the hotel look like they have been bashed into repeatedly by large, heavy luggage (which is probably the case). The furniture in the room, which is circa 1993, appears to have met the same luggage a few too many times.

Still, my room is spotlessly clean, big, with 12 foot ceilings, crown molding, and that aforementioned incredible view and other than sitting here writing about it, I’m not spending that much time here doing anything other than sleeping (on the unusually hard mattress and rock hard pillows) so in the end, it’s fine. I’ve decided to say that it has character and leave it at that.  Did I mention the view? 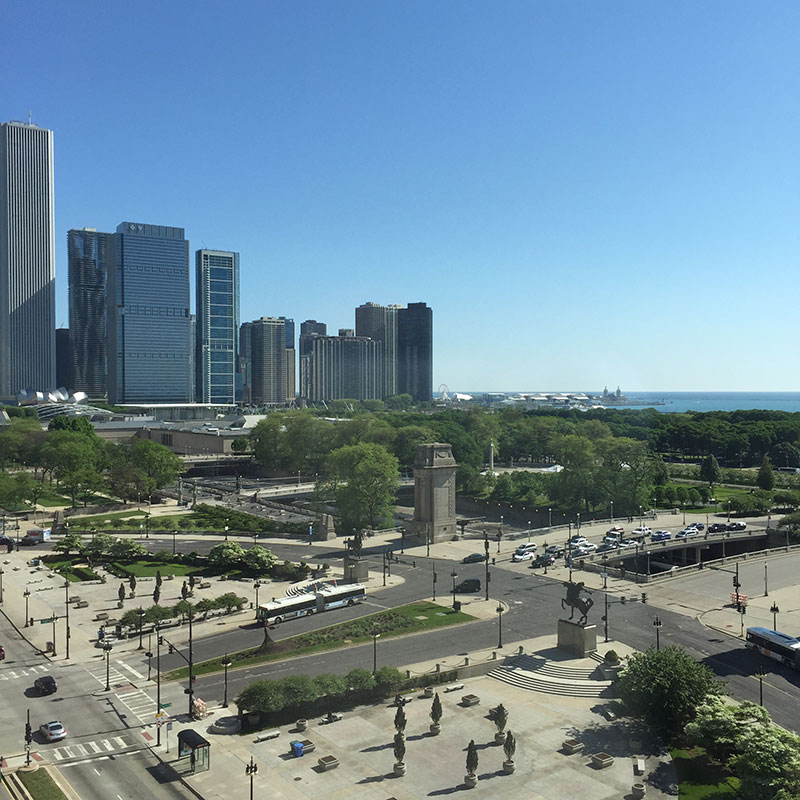 Friday I slept in, because, vacation, and then set out on my day’s amusements.

The first stop was Willis Tower, the artist formerly known as the Sears Tower, and the second tallest building in the United States, behind only the new Freedom Tower in New York City. No, I did not go there to go up more than 100 stories and walk out onto a plexiglass box hanging off the side of it. I went because they were supposed to be having a food truck fest on the plaza at the base of it. I believe that I have my priorities in order, thank you very much. 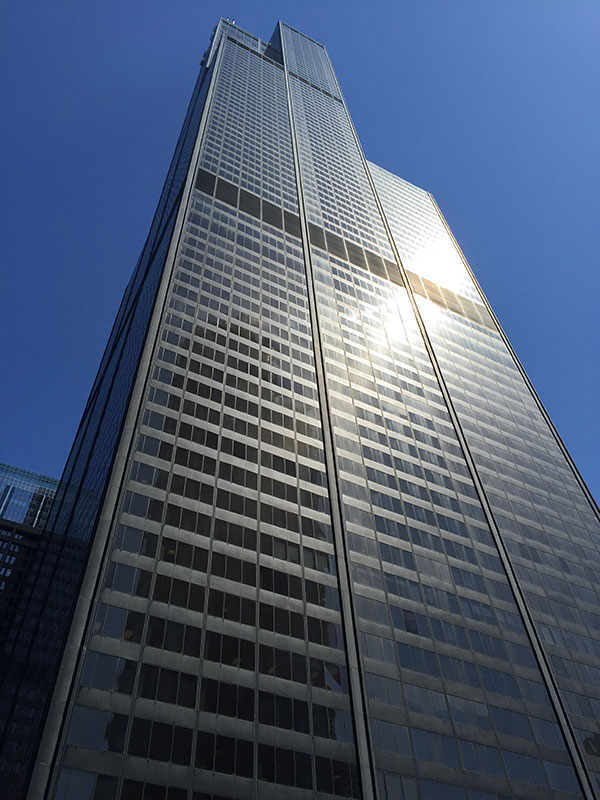 When I got there, only 4 trucks were parked along the curb and they were pretty lame – a coffee truck, a Chicago pizza truck, something else that was so completely uninteresting that I can’t remember what it was, and a BBQ truck that, for some reason, didn’t seem all that appetizing. I was there on the early side so I decided to waste a little while by going up in the Willis Tower anyway. No, I had no intention of going into the stupid box, but I figured it was there and why not. Well, because the wait time was about an hour and I’m sorry but going up into a crazy tall building so I could experience terrible vertigo and cold sweats is dumb enough but waiting for an hour to do it seemed ludicrous.

So I went to the BBQ truck and ordered a pulled pork slider and some mac and cheese. I should have listened to my instincts. The pork was tough, the sauce was glorified ketchup, and the mac and cheese was… I don’t even know how to describe it. Noodles in a soupy, cheese-like substance with chunks of cheese sitting on top. Um, no. 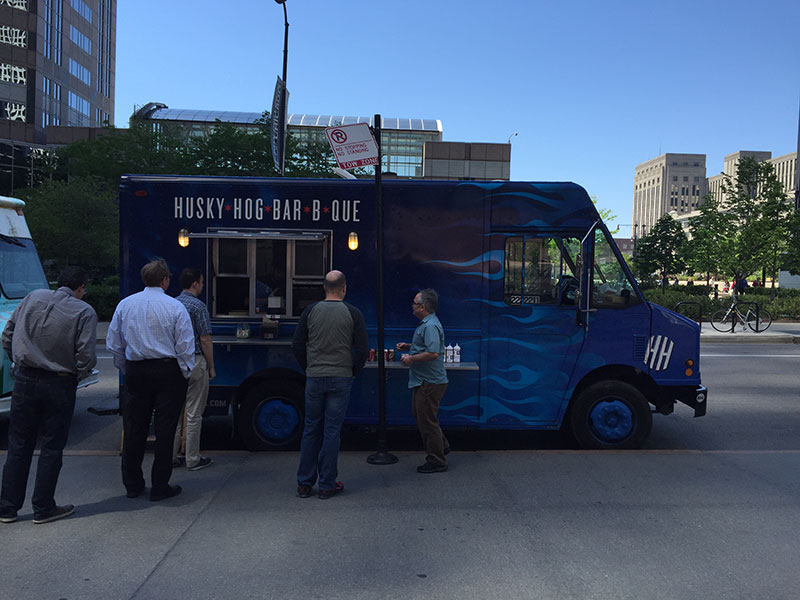 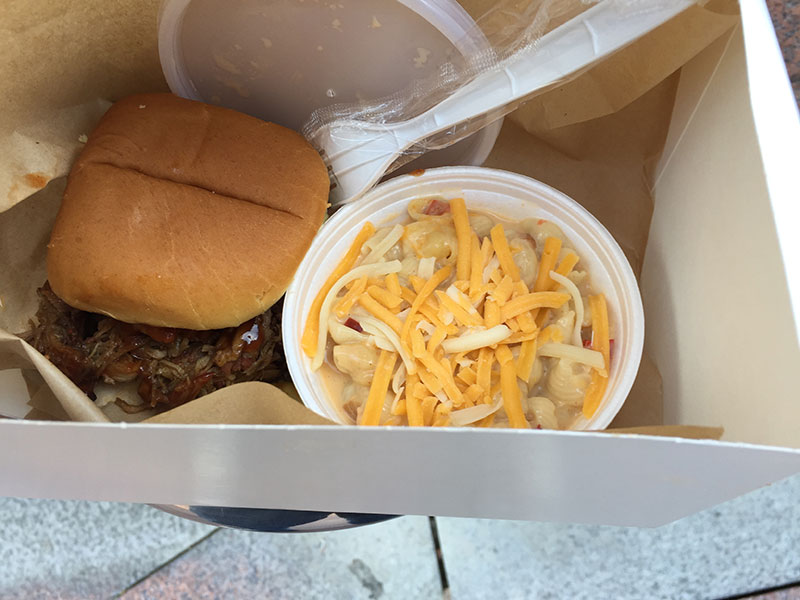 I had a plan for the day but this threw a wrench into it, so I decided to rearrange my schedule and head to The Purple Pig for lunch instead of dinner as I had intended. For those of you who may not remember the last time I was in Chicago, this is a delightful little place on Michigan Avenue near the river whose purpose is “Cheese, Swine, and Wine” according to the sign over the front entrance. It is insanely popular and they don’t take reservations so you have to sometimes wait for hours to get inside. Last year I lucked into a single seat at the bar twice and today it happened again. The restaurant was completely full with at least 50 people in line outside and I managed to slide into the one single spot left in the entire joint. 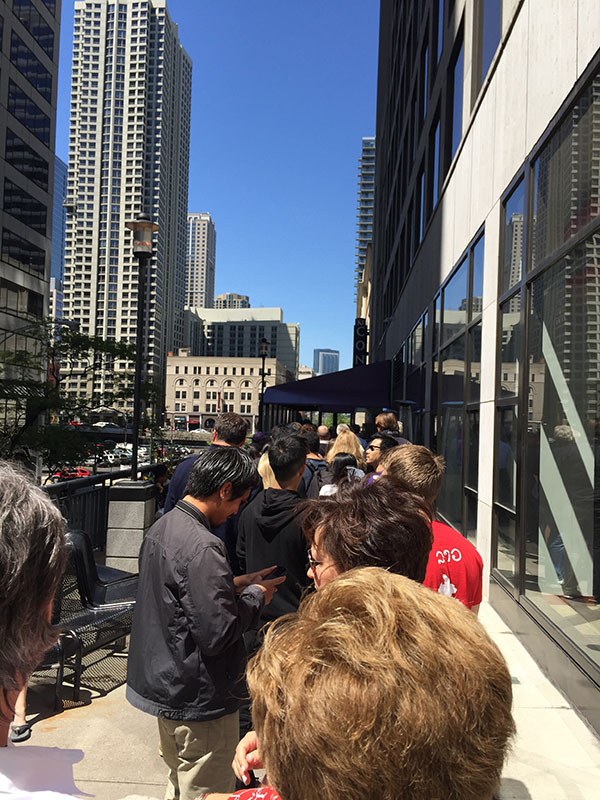 Not wanting to mess with what I knew was a good thing, I went for the Greek Cornbread, which is fluffy and delightful and topped with Feta cheese and honey and wow, and the pork shoulder, which is served on a bed of mashed potatoes and a spoon – it is that tender. Everything was just as good as I remembered it from last year and I may have to go back again at some point before the trip is over. 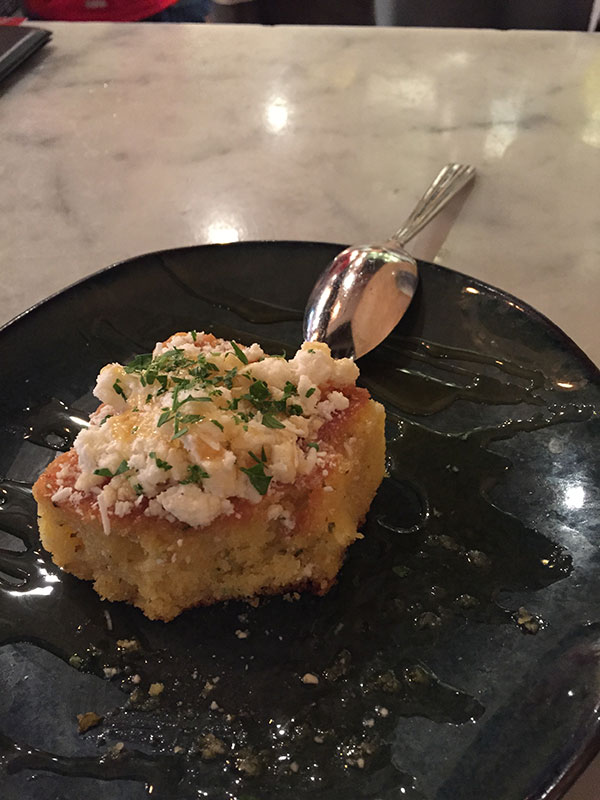 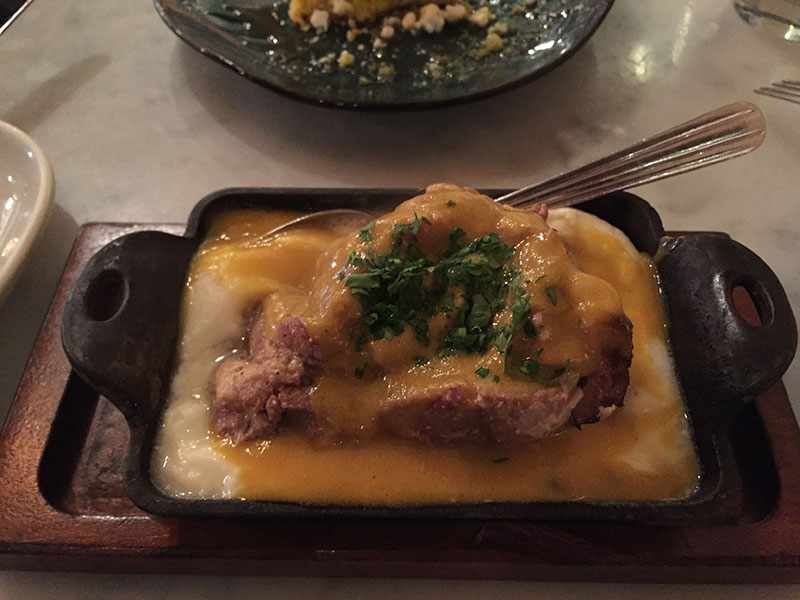 After that I strolled up the street to the Hershey store and bought sweets because apparently the honey drenched cornbread just wasn’t sweet enough.

Later that night, dinner was at Portillo’s, my favorite Italian Beef place in Chicago, which did not disappoint. 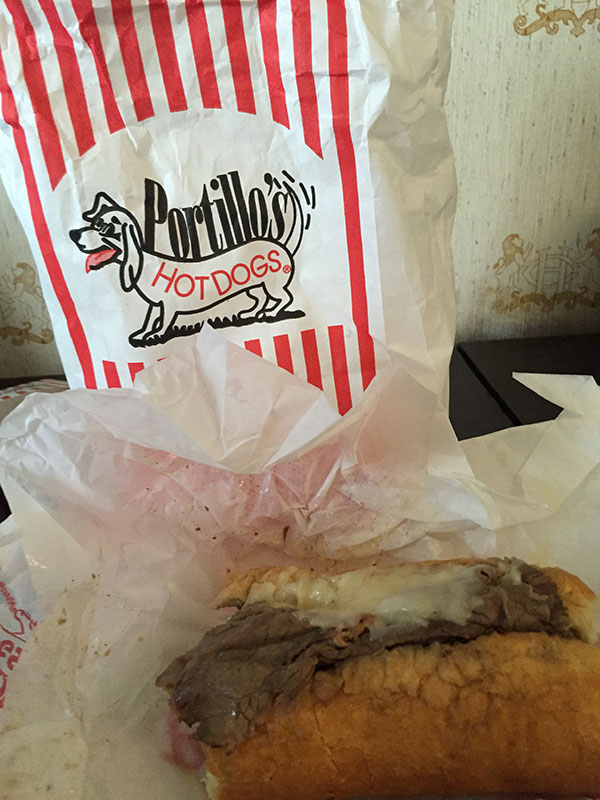 In between the two meals, however, I want to tell you about one other thing I did, but first a little backstory.

I don’t often refer to myself as a cancer survivor. Part of it is because I’m only two years into my remission and you have to get to five before the oncologist will pat you on the back and say you are cured and send you on your way, hopefully with a lollipop. All cancers are tenacious little bastards and like to come back when you least expect it but esophageal cancer is especially insidious that way, enjoying a good lurk in the hidden recesses for years until it decides to rear its ugly little head and say “Hey, remember me? I’m baaaaaaack!”

So, yeah, not calling myself a “survivor” is a little bit of not wanting to jinx myself, but it’s more than that. There’s also the whole survivor’s guilt part of the equation.

A few weeks ago I co-chaired a bit charity event to raise money for the Esophageal Cancer Action Network where people rappelled down the 24 stories of the Universal City Hilton. It was a great day, made deeper and richer by the stories we told of the people our intrepid group were doing the rappels in honor of – those who had faced esophageal cancer and, in most cases, had been lost to it.

I put together all of the packets of material and scripts for all of these people and couldn’t stop being overwhelmed by those razor’s edges we walk all the time. The line between what happened to me and what happened to them is impossibly thin and the fact that I was there to tell their stories instead of having mine told in my absence was sobering to say the least.

Being a “cancer survivor” seems to imply a strength of character and a sense of obligation that I can’t live up to even on my best of days. The only reason I lived is because I was paying attention, I had really good doctors, and, most of all, I was incredibly lucky. Like, stupid lucky. Lotto lucky.

And then there was Mary. And Dave. And all of the other people I have known who weren’t so lucky.

So yeah, I feel a little guilty. Sue me.

Still, technically, I have survived thus far after having cancer so I guess that qualifies me, at the very least, to take a self-reflective stroll through the Cancer Survivors’ Garden located in Maggie Daley Park in the heart of the city.

It’s a pretty space set on a terraced hillside leading down to Lakeshore Drive by Lake Michigan. At the top of the hill is a metal structure resembling a greenhouse of sorts, inside of which are various placards talking about cancer in all of its various incarnations. Down below is a series of pillars, each with an inscription that aims to be inspiring that I mostly kind of rolled my eyes at. Don’t get me started about the whole “positive attitude” thing.

There was one inscription that I liked… “At least one person has been cured of every type of cancer known to man.” Screw your positive attitude, let’s talk about curing this bastard.

It was a beautiful, sunny day, and so I sat on a bench in the Cancer Survivors’ Garden and had a cookie from the Hershey’s store.

Now that’s what I call surviving. 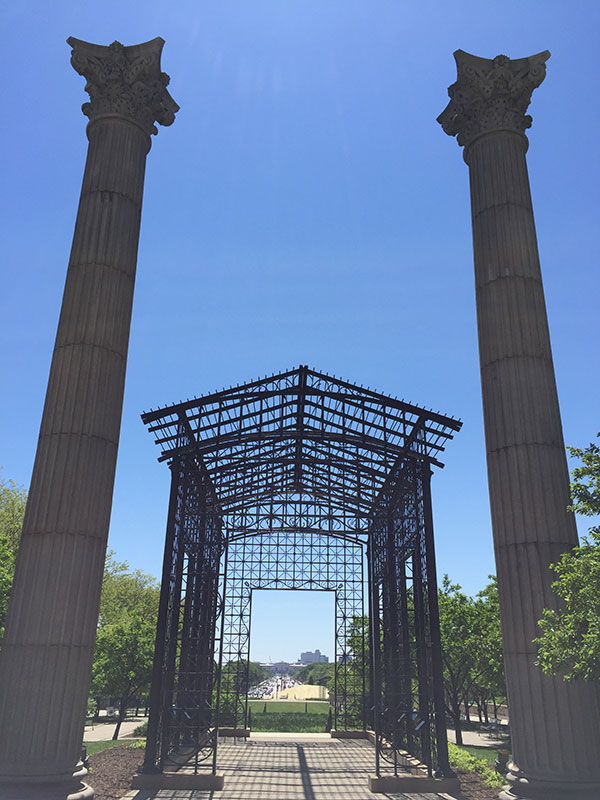 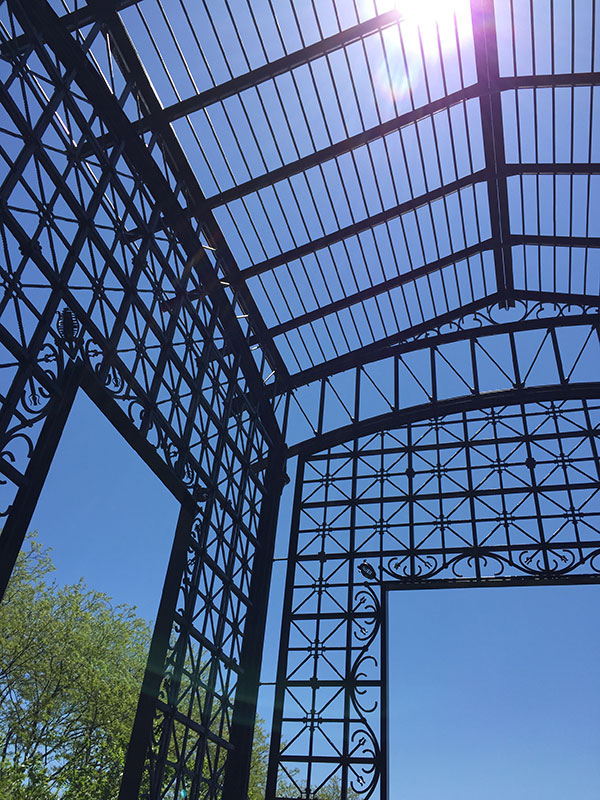 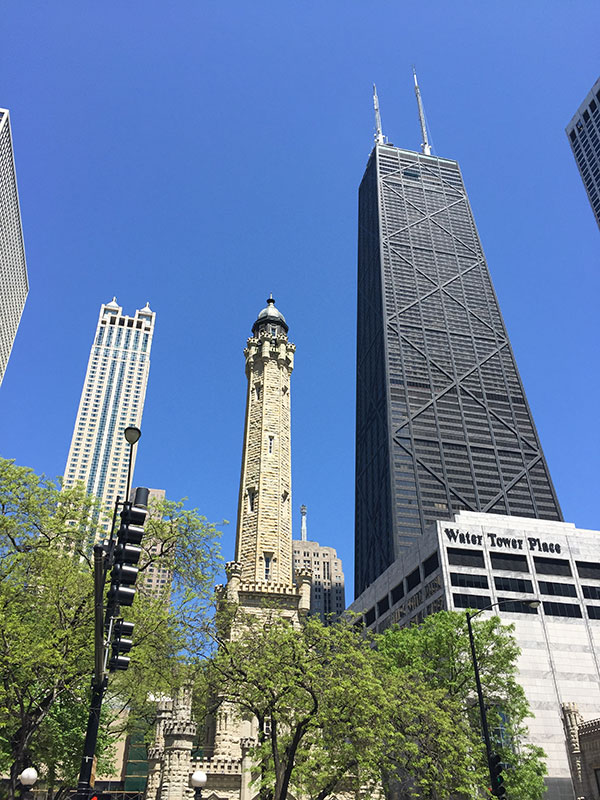 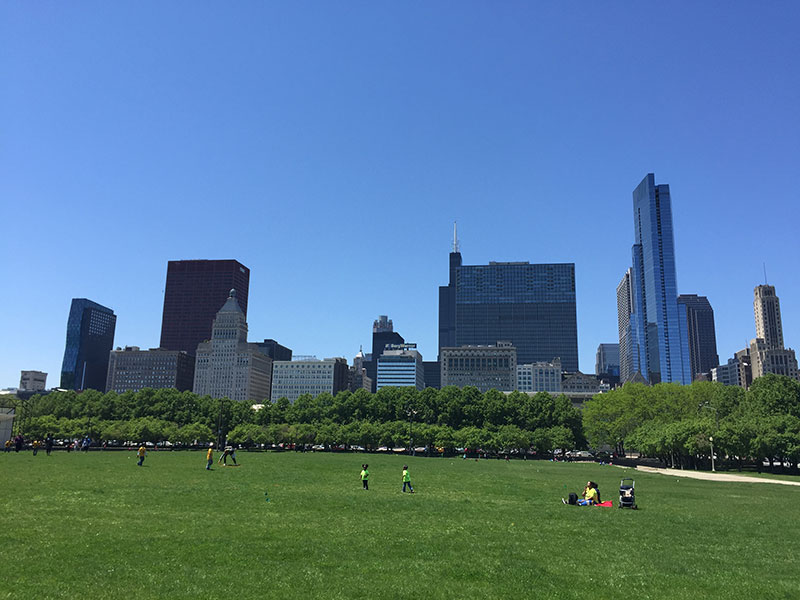