We shall call today the day of way too much food.

As many of you know, I love food but food, often, doesn’t love me back. It’s all the glorious consequence of having a significant chunk of gastric system removed in order to get rid of cancer and while I am able to eat pretty much whatever I want, I am not able to eat a lot of it at any given time. Occasionally, however, circumstances make me try to push my limits and today was filled with such circumstances.

I started my day with a drive out to Westmont, Illinois, about 20 miles west of Downtown Chicago for the Red, White, and BBQ festival, billed as the biggest barbecue championships in Illinois. The day was absolutely perfect for it –blue, sunny skies with only a few wispy clouds high up and temperatures in the mid-70s.They take over a park and have dozens of competitors, food vendors, carnival rides, live bands, and more. 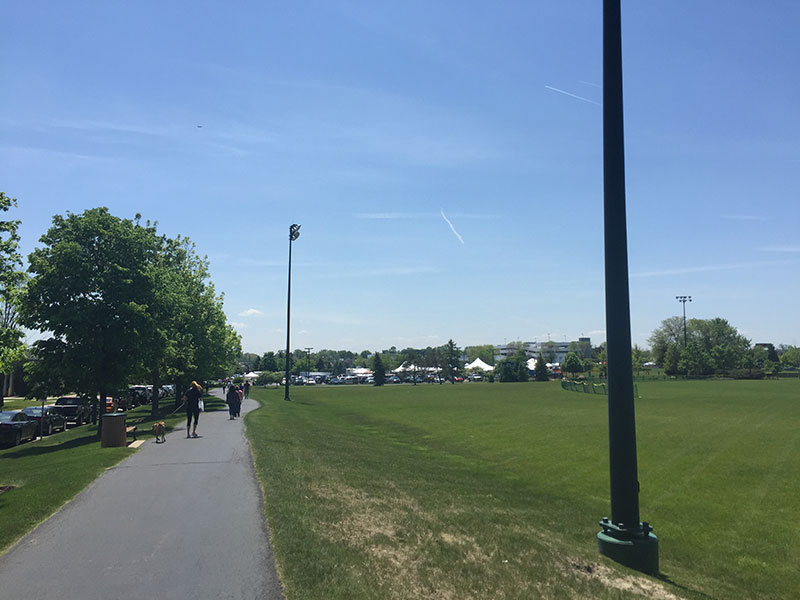 This is so completely Midwest in all of the best ways right down to the VW Bus converted into a giant beer keg and the fried Oreo, Milk Way, and Twinkie stands. 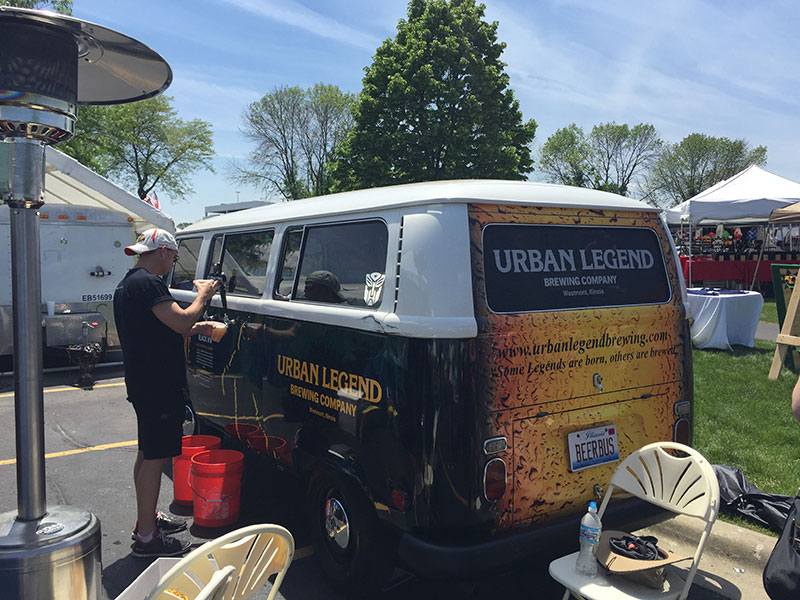 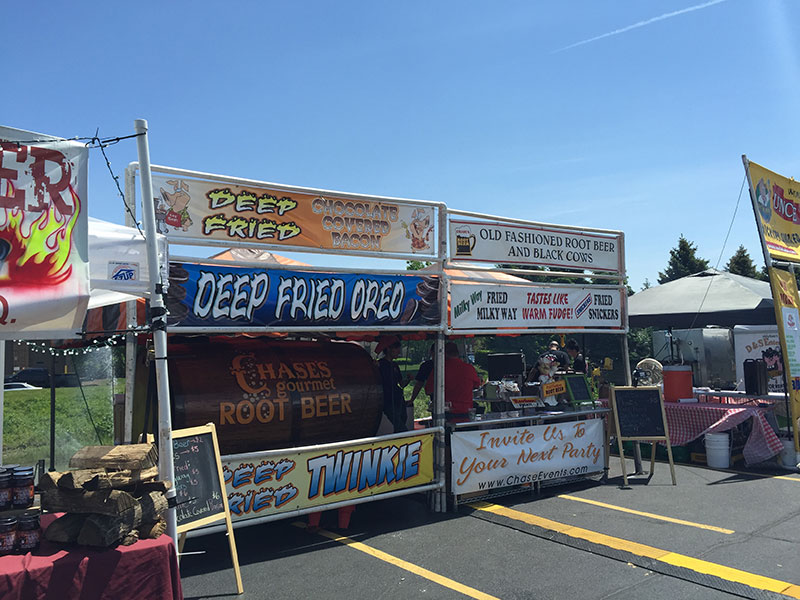 Like most BBQ competitions, the bulk of the actual BBQ is reserved for the judges, leaving the wandering crowds to lick their lips as they walk by the rows and rows of cookers. But they still had several BBQ vendors and I decided to sample as many as I could before I passed out from the meat sweats.

The first was from Fire Water BBQ and I got their pulled pork sandwich. The meat was perfect – tender, smoky, and absolutely delicious even without sauce, which was pretty good, too – maybe a little on the vinegary side for my tastes. The only disappointment was the bun, which was so pedestrian white bread that I just shoved it aside and dove into the pork. 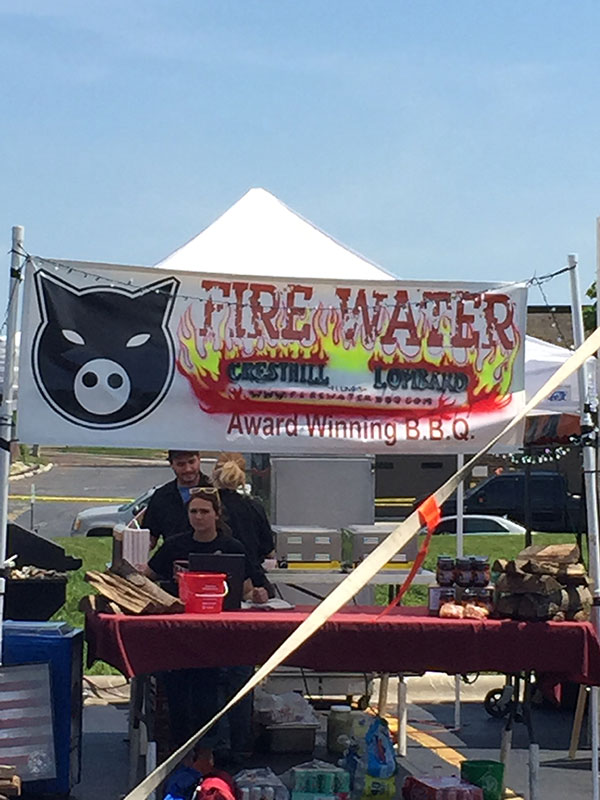 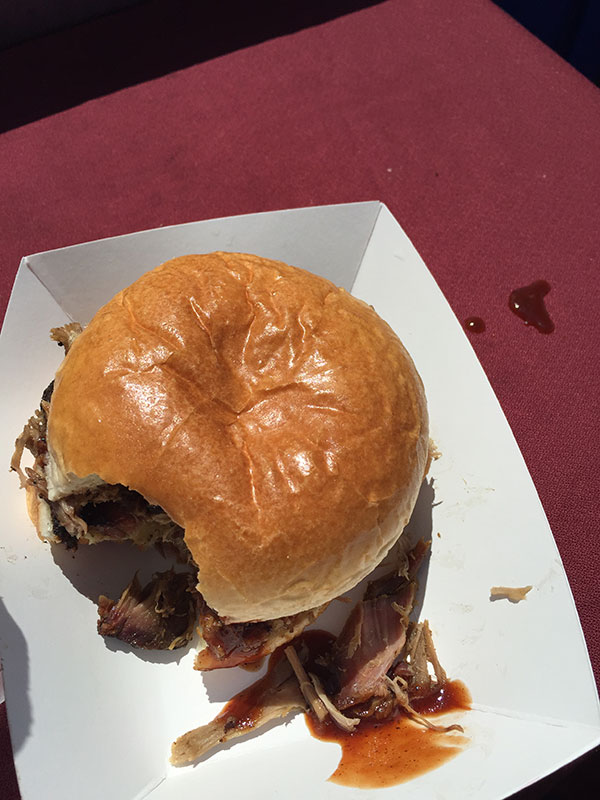 Next I went to Uncle Bub’s Hickory Smoked Barbeque and tried their pulled chicken BBQ, sans bun, and a side of macaroni and cheese. They went a little heavy on their sauce, as you can see by the picture, but it was good not great. I would’ve cooked it a little more and cut down on the sauce but now I’m just being picky. Despite the not-found-in-nature orange color of the mac and cheese, it was delicious, with a creamy tang. 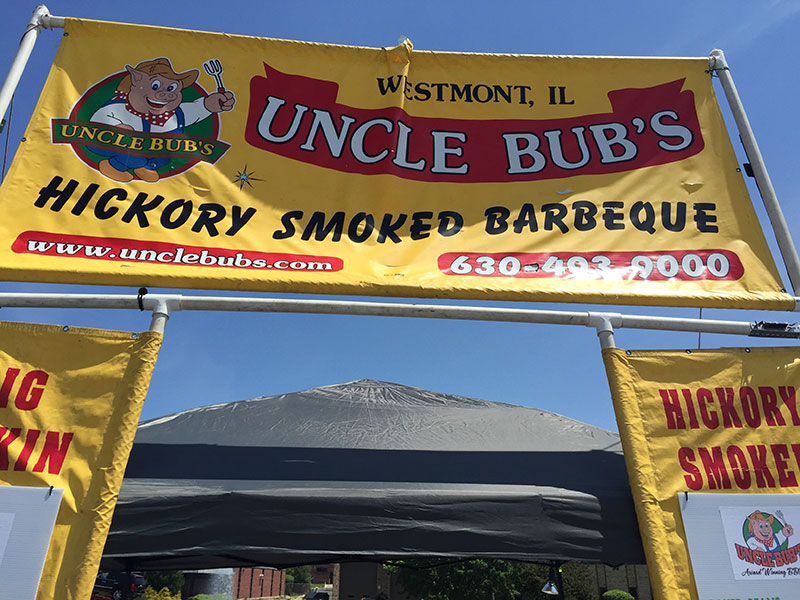 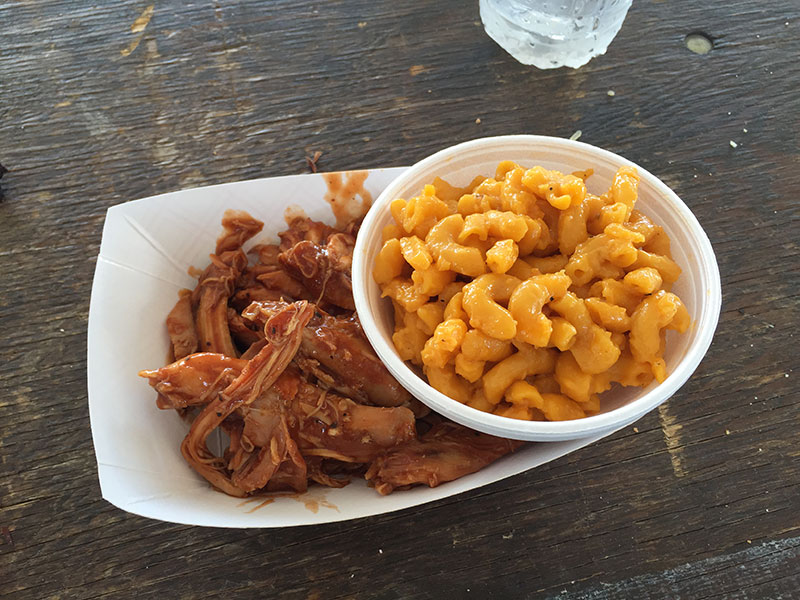 Even though I had only had a few bites of each, I was already approaching full but then I saw the sign… this sign… 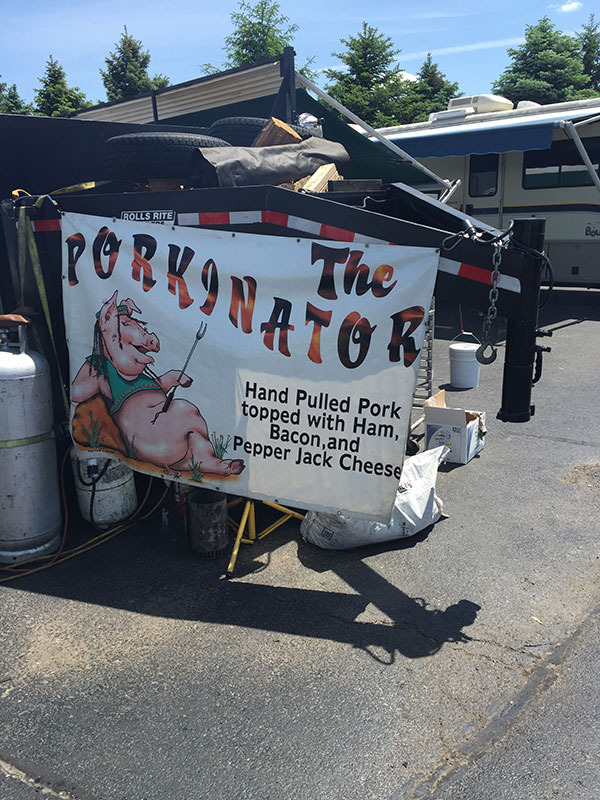 I requested a smaller version of it and this is what I got: 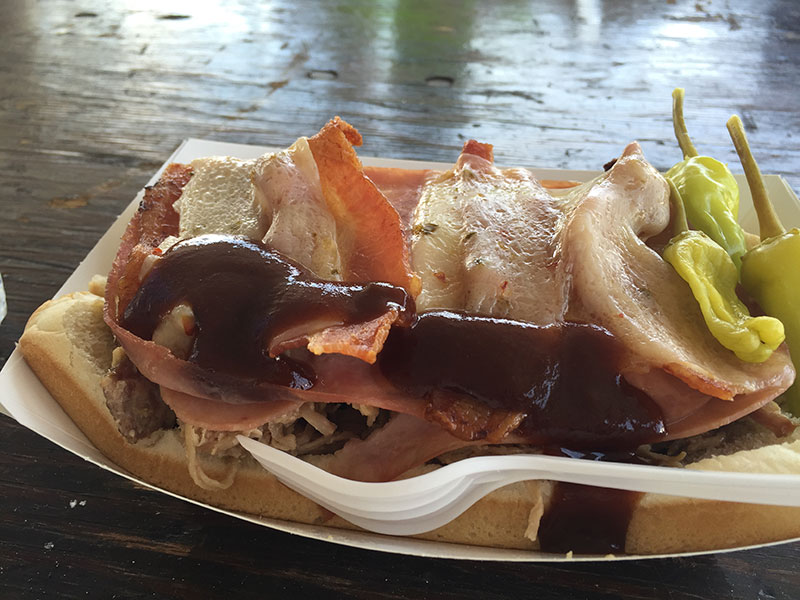 Note that their version of smaller was to put a little less pulled pork on the bread at the bottom.  It was impossible to eat without making a giant mess of myself, so I kind of attacked it with a knife and fork and got the general idea.  There was smoky, vaguely spicy pork on the bottom, thin slices of juicy smoked ham above that, and then huge chunks of chewy bacon topped with tangy pepper jack. It was an almost religious experience.  I may have cried a little at one point.

Unsurprisingly, this is where I started to feel as though what is left of my stomach trying to launch itself out of my body. It didn’t, but boy it wanted to.

Although there was more, I decided to be somewhat reasonable and head back into the city to visit the Chicago History Museum. Located on the north side of town, this sparkly, modern facility tells the full history of the city, from its early settlers through the good (largest trade port in the Midwest, architecture, entertainment, agriculture) and bad (the fire, the St. Valentine’s Day Massacre, the 1968 riots) with pit stops along the way at everything from the railroads to fashion to Abraham Lincoln. 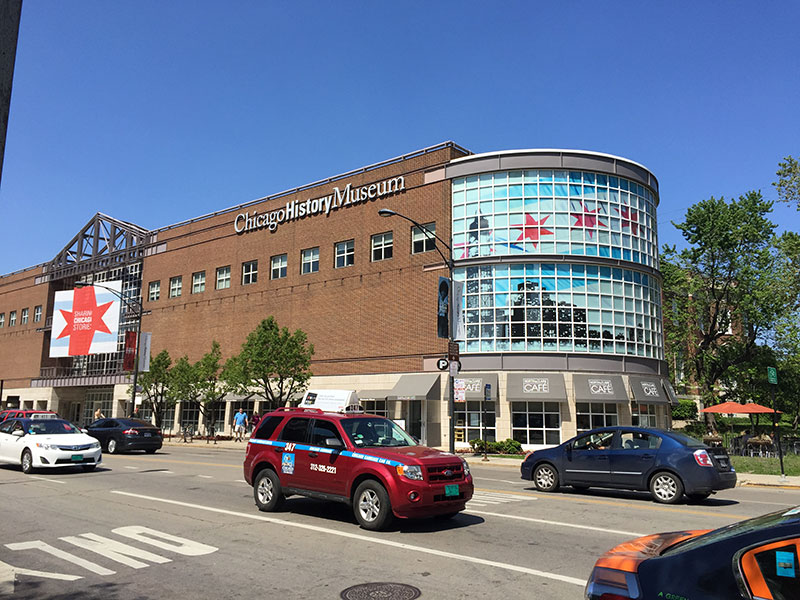 It was all well done and the presentation was top notch but interestingly the best exhibit had very little to do with Chicago at all. It was called The Secret Lives of Objects and it had various things in a stark, black-walled room, and placards in front of each that were written as if the object itself was talking. For instance, there was a phone booth, and it started out something like “I used to be everywhere; on every street corner.” Then it went on to discuss what happened to the phone booths in general and how this particular one got to the Chicago History Museum. There was a booth from a famous nightclub, a bell that had been on a prison camp, and the table on which the documents were signed that ended the Civil War. Fascinating.

Right around the corner was the Second City theater and I headed there for the “Best Of” show, a rapid fire succession of short sketches and improve that was as reliably entertaining as Second City has always been. I loved the show that played in Vegas at the Flamingo for many years and this reminded me how smart and talented this troop of entertainers is. I could never do improv – I can’t even think of things to shout when they ask for suggestion from the audience.

“Name a place” they say, and I start going, “Well, I could say Los Angeles because I’m from there but that’s a little boring and obvious so maybe I’ll say Savannah, because I love the city so much, but what if they don’t know Savannah like I do and they wind up just doing ‘Gone with the Wind’ accents? Okay, so how about I say something offbeat like Tuscaloosa or Poughkeepsie…”

By now they are already done with the improv that they were asking for suggestions to fuel. 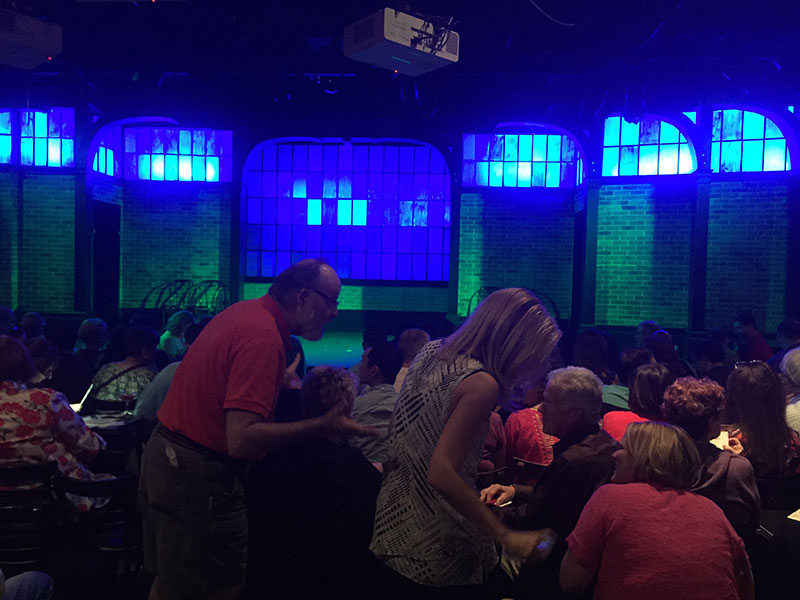 I headed back to the hotel and took a much deserved nap and then woke up hungry, believe it or not. On my jaunt yesterday I had noticed a place called Chuck’s – A Kerry Simon Kitchen. I love Simon’s restaurants in Vegas. His KGB, which closed recently, served up the best burgers in all of Vegas as far as I was concerned, and his Carson Kitchen in Downtown, is a delightful gem of farm-to-table foodie goodness. In addition to being an amazing culinary wizard, the guy is also pretty remarkable in that he is fighting an advanced form of MSA, which is sort of like MS but worse. He has been confined to a wheelchair for awhile now and reportedly has to get fed through a tube but he continues to oversee his restaurants as he can and you have to give him props for that.

The space in the Hard Rock Hotel is modern and kind of bland but the food was fantastic. I had more pork… come on, I’m in the Midwest!… in the form of an apple cider maple glazed pork chop and a twice-baked potato. The chop was thick, insanely juicy (which is not always easy to do with a pork chop), and both sweet and tangy with the maple and apple cider creating a delicious blend of flavors. The potato was an ooey, gooey, cheesy, bacony mess and I loved it. I have no idea how I found room but I ate more than I thought I was capable of eating. 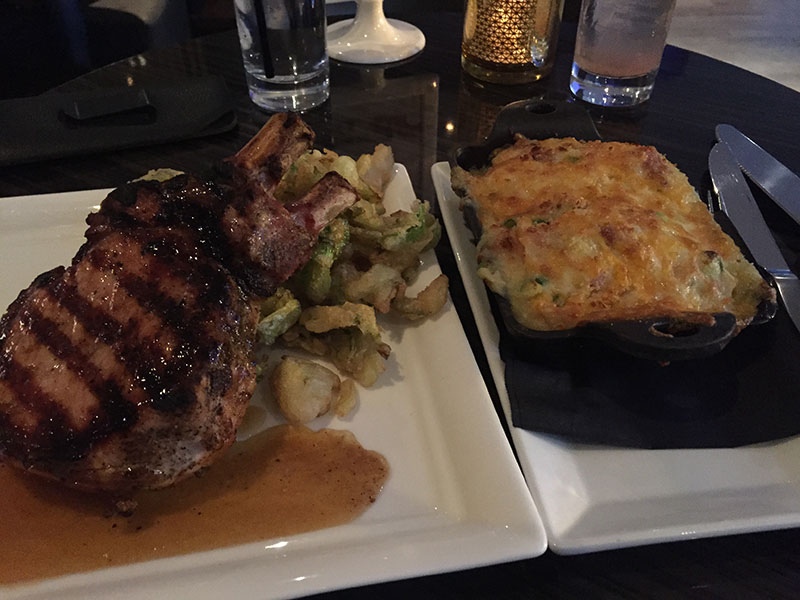 The night ended with fireworks shot off of Navy Pier over Lake Michigan. What a good day of way too much food)! 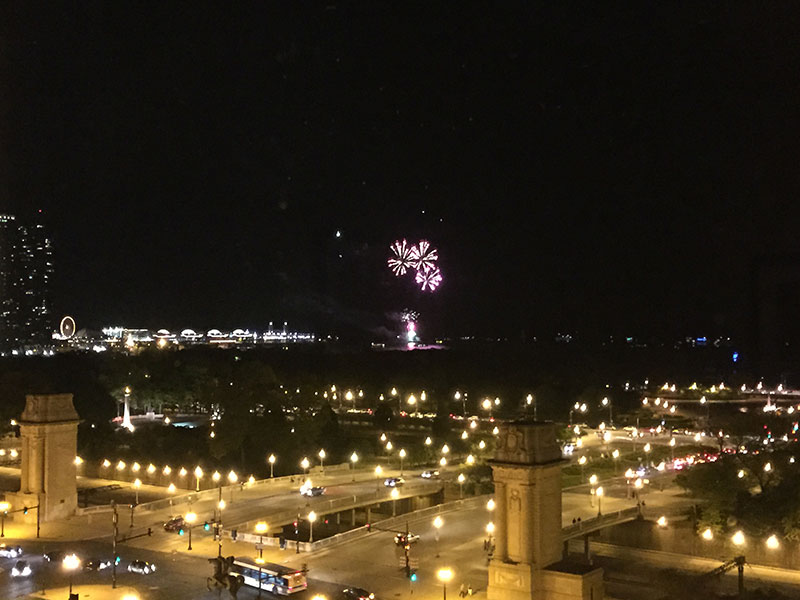 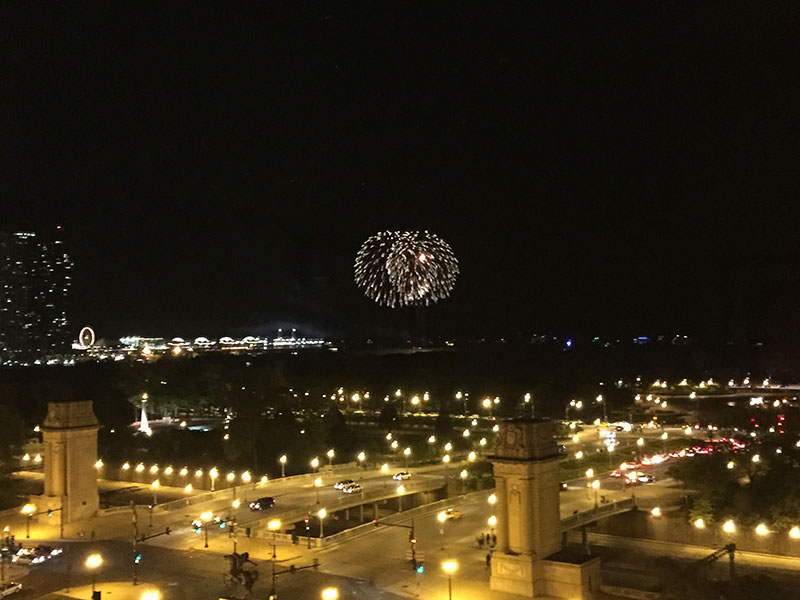 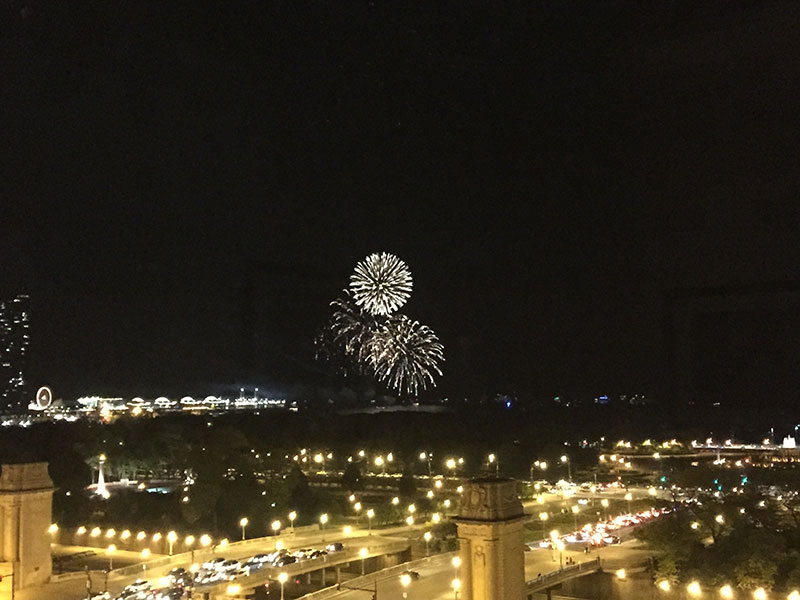 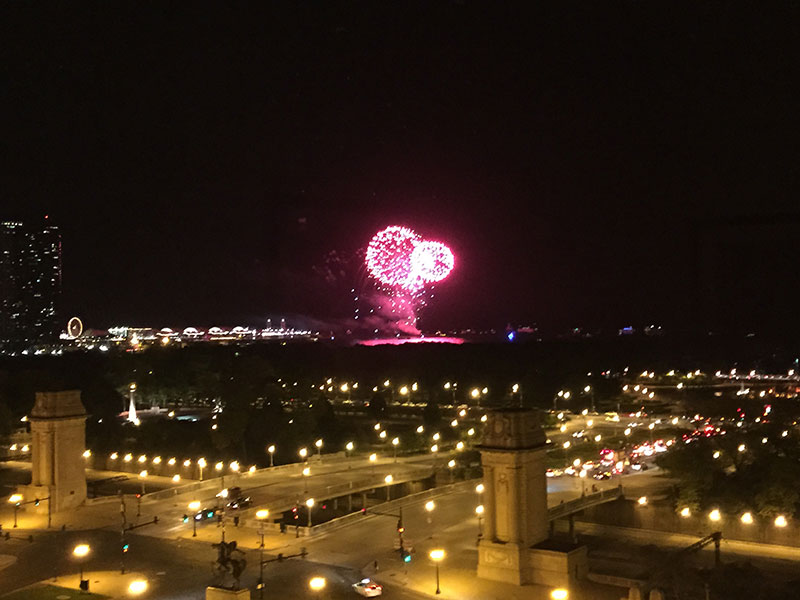