The Last Place I’ll Ever Live

This month marks the 18th year that I have lived in the same apartment building. I moved in on March 15, 1995 and just never left. I thought about it many times; even looked for new apartments closer to whatever job it was that I happened to have at that time (there have been roughly a dozen of those in the last 18 years) but cost and/or inconvenience kept me stationary. I’m sure there’s a metaphor in there somewhere but I’m going to choose not to examine it too closely right now if that’s okay with you.

The furthest I ever made it was next door. In 2010 I moved from one apartment in the building to a different one. Yes, I hired movers but in my defense, despite the fact that the two apartments literally share a wall, moving from on to the other meant carrying things down one or two flights of stairs, down a hallway, and back up one or two flights of stairs (both apartments have lofts). If you could’ve done that by yourself, then you’re a better person than I am.

Anyway, my old apartment had become quite worn. The carpeting was threadbare and stained, the curtains were torn and hanging loosely on their rods, and I didn’t do the best job in the world of keeping the place clean. More often than not it looked like a place that the survivors on “The Walking Dead” would hole up in, but only for a few days until they couldn’t stand it anymore and then decide to take their chances with the zombies.

When I moved into the new apartment it was just that: new. New carpeting, new paint, new blinds, new everything. I like new stuff. It’s so shiny. So for the first several months of living here I kept the place spotless. I put stuff away as opposed to dumping it on the dining room table, I dusted and vacuumed regularly, hell, I even made my bed every day.

It was in that bed that I had the thought. I was lying there one lazy Saturday morning, only about a quarter awake, resisting the idea of becoming any more fully awake and I was thinking about the apartment and how clean and sparkly it was and how I needed to vacuum or clean the bathroom or do something that day to keep it that way. I sort of asked myself in my mostly asleep state, “why are you going to so much effort to try to keep this place so nice?” And my mostly asleep self answered thusly: “Because it’s the last place I’m ever going to live.”

My eyes snapped open and I thought, “Well, that’s a pretty fucked up thing to think.”

To this day I don’t know where it came from. I was unemployed at the time and things were kind of bleak so I chalked it up to a bad attitude and left it there, unconsidered. But it has lingered with me ever since and now… well, now I wonder if I didn’t maybe know something had started.

In 2010 I had one of my regular endoscopies to monitor the progress of the Barrett’s Esophagus condition I had. Everything was fine. In 2011 I didn’t get the endoscopy because I was unemployed and I couldn’t afford the out-of-pocket costs that came along with COBRA based insurance. It would’ve been sometime right around there that those cells in my esophagus started their little mutation dance.

You probably can’t tell it by looking at me, but I’ve always been fairly in tune with my body. I have always known when something was wrong, even if I didn’t know specifically what it was. Over the last few months as I tried to recover from the surgery and the doctors kept telling me that the weight loss and the pain and the discomfort was just part of the process and it would get better eventually, I knew something was wrong.

I honestly didn’t think it was cancer again/still. That one took me by surprise.

In the years since I had that random thought while mostly asleep, my housekeeping skills have waned considerably. I don’t make the bed every day (or almost any day), my dining room table and kitchen counters are usually dumping grounds for whatever happens to be in my hand that I don’t want in my hand anymore, and there have been times when the layer of dust on the furnishings makes them visibly bigger than they actually are.

A few weeks ago, right around the time that I got the first blood test that showed some anomalies, I started cleaning again. Like crazy cleaning –moving furniture to vacuum and scrubbing the tile floors. The living room, the dining room, and the kitchen all look great. The bathroom and bedroom are next.

Now, I want to be clear about something…. I’m not ready to accept the concept that this really will be the last place I’ll ever live.  The upcoming surgery will provide a lot more insight and things, while decidedly bleak, are not completely without hope.

Just in case… It really should look nice again. 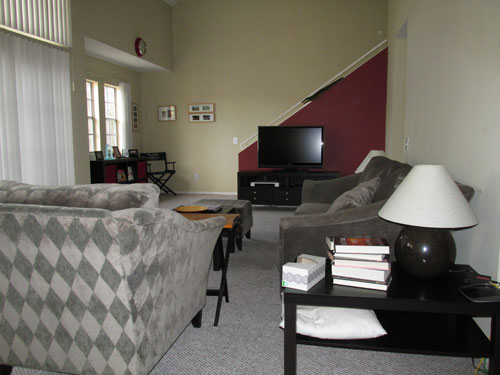