I keep waiting for cancer to make me a better person.

To be honest, I feel a little cheated – like I should get one of those “and all I got was this lousy t-shirt” t-shirts.  “I got cancer and feel as though it should have fundamentally changed who I am as a human being but all I got was…”

I’ve talked a good game.  After all, I have a lovely wall hanging borrowed from my good buddy Damocles above me and so I have woken up in the mornings and thought my positive thoughts and tried to not waste time on sweating the proverbial small stuff.  I have attempted to be more patient and less quick to anger and more tolerant of the needs of others and less judgmental about people in general.

But here’s the deal: there are some really annoying, stupid, fucking people in the world and they bug the shit out of me.

See?!  People who have cancer shouldn’t say things like that.  Okay, I may not actually have cancer but I have had cancer and still might have cancer and if I do it’ll be terminal cancer and so it all falls into the same big cancer bucket and that bucket is yellow and has stuff painted on the side of it like sunflowers and inspirational sayings like “Keep on shining!”  My bucket is black and dented and says “Bite me.”

Someone said I was brave the other day.  They were marveling at the idea that I could deal with all the cancer drama and still come in to work every day and stay relatively sane and even-keeled throughout it all.  I responded by saying that I really just didn’t have a choice in the matter.  I would LOVE to sit on the couch and watch TV all day and disengage from every last aspect of cancer, my life, my job, and the world I general but I have not figured out a way to turn that into a thing that provides me with a paycheck and health insurance.

Speaking of which, I recently became a million dollar man.  Yep, with the $81,000 hospital bill from this last surgery I have crossed the $1 million mark in terms of medical bills since all this started last June.  I am Steve Austin only instead of a bionic eye and super speed I have chronic nausea and a frequent sharp pain in my upper right abdomen.  I wonder if I can fight crime with either one of those things.

Now, granted, I don’t have to pay a million dollars – health insurance is good for something, I guess – but my out of pocket has been a wee bit on the expensive side.  How expensive you may ask?  Well, last weekend I went to Palm Springs to try to relax and I stopped at one of the Indian casinos on the way home (gambling relaxes me, shut up) and I won a fairly ridiculous amount of money on a slot machine and the first thought I had was, “Now I don’t have to put my hospital bill on my credit card!!” 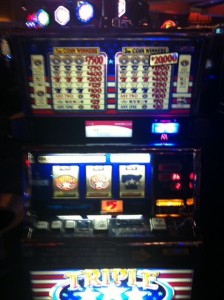 But back to the whole brave thing, which I am most definitely not.  The people in Boston who ran toward the places where bombs had just gone off were brave.  The people in Texas who were pouring water on the fertilizer plant fire to give a little more time for evacuations from nearby buildings even though they knew it was going to blow up were brave.  Me?  I’m too busy whining about not being able to eat a greasy hamburger anymore to be brave.

This is what I’m talking about.  I know cancer doesn’t change people.  But despite that knowledge I was expecting – still am expecting – that cancer is going to change me.  I think it should make me into a better, braver, more interesting human being – one that does volunteer work and rescues puppies and shares insights about the meaning of life with knowledge-seeking young people and never, ever, ever gets annoyed at all the stupid fucking things people do!

Instead it has done exactly what I predicted it would do.  Awhile back I wrote about how cancer merely amplifies a person’s inherent qualities; it makes them bigger and brighter and puts them in more stark relief.  So before cancer I was impatient when things didn’t happen as quickly as I wanted them to, petulant when I didn’t get my way, and quick to anger when people didn’t live up to my expectations.

So now, I’m just a barrel of laughs!

Maybe it will be different when I finally know for sure.  The tests said I have cancer but they are not infallible.  The surgery said I didn’t have cancer but it is not infallible.  The oncologist says wait until June and then run all the tests again because if there isn’t cancer then woohoo you’re probably cured and if there is cancer then boohoo you’re probably screwed.  Perhaps then, armed with the knowledge that I have either survived cancer or am dying of cancer, will I be able to finally be that better person I keep hoping I will become.

Or maybe I’ll just go print up those t-shirts.