The Year of Living Differently Day 1: New Year’s on the Las Vegas Strip

I’m kicking off The Year of Living Differently in Las Vegas, which has offered me a veritable all-you-can-eat buffet of new and different.  I dined at a couple of restaurants I have never visited before; I went in to an Apple store for the very first time (verdict: a little creepy); I felt J-Lo’s ass.  Well, I felt the ass of a wax mannequin of J-Lo but only because the person giving me the tour of the Madame Tussaud’s in Las Vegas told me to (the statue blushes when you do it – cute).

But of all the new things I did, the one I’m going to pick for my inaugural TYOLD item is that I rang in the new year on the Las Vegas Strip.

Now, I know what you’re thinking and yes, I have been in Las Vegas before on New Year’s Eve.  One of my very first trips back in the 1980s was over the holiday and I remember sort of vaguely looking up from the slot machine I was playing at The Stardust as people shouted “Happy New Year” and that was pretty much it.  I spent the Y2K New Year’s here at a Bette Midler concert (they passed out little pen lights in case the power went out – they all read “I Flashed Bette Midler”).  I watched the big fireworks show one year from my hotel room at The Stratosphere with my parents and brother.

But I have never been outside on The Strip with the teeming hordes at midnight and let me tell you something, I won’t be doing that again… ever.

They shut down the street and hundreds of thousands of people jam together to drink, party, and yell “Whoooo” a lot.  I went outside at about 11:45pm and I got about 20 feet from the door and was stuck.  There was no way to go any further;  no way to go anywhere, really, so I just stopped and accepted that this was where I was going to welcome 2014.  This is what my view was: 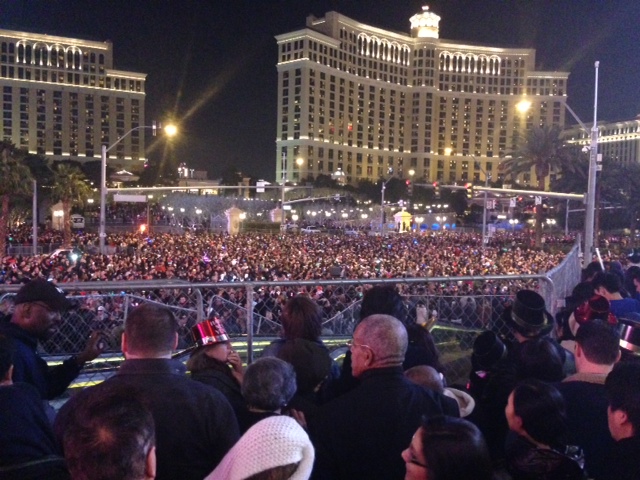 My hundreds of thousands of new best friends.

It was insane and uncomfortable and both hot and cold at the same time  and a girl named Kayla spilled her beer on me and I haven’t had my junk touched that often since that weekend on Fire Island in the mid 1980s.

But I’m glad I did it, just to say that I had a classic Vegas moment and that today, I did something I have never done before.  364 more things to go…