TYOLD 16: The Boringest Place On Earth

Woodland Hills is the capital of the boxy office building, with acres and acres of office parks that are filled with boxy buildings that are always beige, if not in color than at least in style, often both.

The complex I work in is a massive affair with seven literally beige buildings and two literally beige parking garages that are so huge that getting in and out of them takes much longer than it should. The latter is actually a little creepy. You get in your car and you drive and then you drive some more and then you keep driving and you go down a ramp and around a corner and then you keep driving and it seems like there’s no way you can still be on level 3 but you are and then you actually see your fingernails start to get longer and you’re only on level 2 and by the time you get out of the garage the sun is coming up and it’s time to go back to work.

Okay, I’m exaggerating a little, but not by much, I swear.

Anyway, I have never really gone to explore the office park because, well, it’s an office park and so really, why? But today I had not made it away from my desk for more than a couple of minutes so in the afternoon, as the temperatures soared to a delightful 84 degrees (sorry, pretty much everywhere else) I decided to go take a walk around the entire complex just to see what I might see.

It was most beige and totally boring, although there was this sculpture. 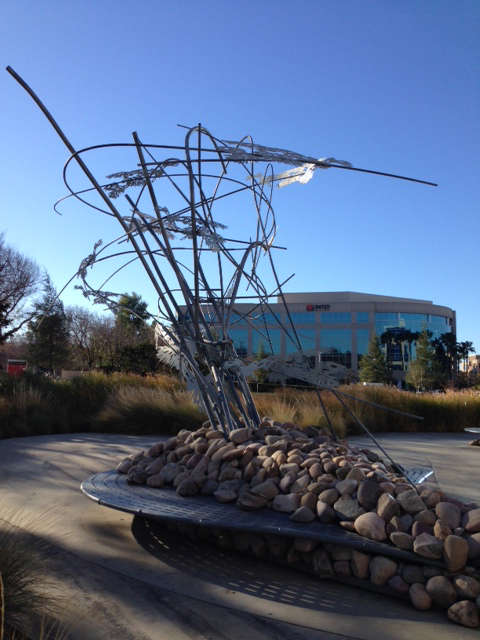 The interesting thing about it was not the sculpture itself, but rather this plaque at its base which reads: “This project is in satisfaction of an art development fee obligation.” In other words, the people who built the place didn’t want to take up valuable real estate that could have been used for more boxy beige office building space or even larger parking garages that would take even longer to get out of, but they had to because of some ordinance that said that their beige office building complexes had to have a tiny bit of something other than a beige office building.

I personally would have preferred a cupcake store of some kind, but I guess people who work in the boringest place on earth can’t be too picky.