I have lived in Los Angeles for nearly 30 years – longer than I lived anywhere else – and so my Midwestern upbringing has ceded ground to Angeleno traits in a variety of different ways.   I work out with a personal trainer; I say soda instead of pop; and I drive everywhere I need to go.  When my office was a little under a mile from where I lived, I drove to work every day.  The CVS on the corner just down from my building where I get my prescriptions refilled?  I drive there.  Last week I went to three different businesses each located on three different corners of the same intersection and I drove to each of them.

There’s lots of history behind why Los Angeles became the epicenter of car culture that involves somewhat of a conspiracy between the automobile and oil industries, but that’s a story for another time.  What it resulted in is a city that is almost wholly dependent on automobiles to get from one point to another, regardless of how far apart those points are.  If you live in LA and you don’t have a car – one of those weirdos who uses our pathetic excuse for public transportation – you are viewed with suspicion and mistrust.  There must be something wrong with you.

These days I work in a big office park in Woodland Hills, the Capital of the Boxy Office Building.  In the park there is a small food court style building with four choices – Baja Fresh, Daphne’s Greek, Salad Farm, and The Stand (burgers and sandwiches) plus a Coffee Bean for caffeine boosts.  Everything else is outside the office park, at least a couple of blocks away – and these are not small blocks.

Most days I bring my lunch and on the days I don’t I’ll either walk over to the food court (which is right next to my building) or I’ll drive to something elsewhere.   I have never walked to get lunch anywhere outside of the office park in which I work in the nearly two years I have worked here.

The bulk of that is because I’m lazy – freely admitted.  But there’s also issues of how long it takes (I fret about being away from work for longer than I have to be), the weather (sometimes too hot, sometimes too chilly), the traffic (it’s a very busy, noisy, exhaust fume filled street), etc.  There’s also my ongoing food issues, which makes something as simple as lunch a challenge.  I’m nauseous a lot and the idea of eating often makes me want to hurl.  And when I do eat, I can wind up in pain or with some side effects best left out of this particular discussion.   So when I go out for lunch, I like having my car so if the place I was heading to suddenly makes me want to puke, I can pivot and head somewhere else.

But mostly it’s because I’m lazy and I’m an Angeleno and we don’t walk.

Work today is still a little slow post holiday.  The weather is a stunningly beautiful 75 degrees and sunny (sorry, snowbound New England but also kinda not).  There are less cars on the street than usual, again because of the holiday.  My stomach was feeling fairly calm.  And I needed something new to do today…

This is me walking up the sidewalk to get a sandwich at a place up the street. 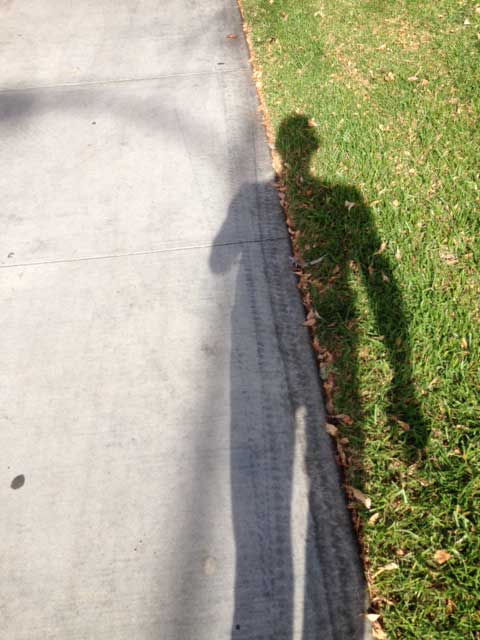 I know you want me to say that I felt great doing it, that I saw things I had never noticed before, and that I gained edifying insights not only about myself but the world around me… but really, it was just me walking a couple of blocks to grab a sandwich.

At least it didn’t make me want to hurl.  And it was different.