Chicago day 2 started later than I had anticipated due to the aforementioned drinking and carousing the night before, but I still managed to get up and out in enough time to get things done.

Stop #1 was an old favorite, Hot Doug’s, a famed “encased meat emporium” (read: gourmet sausages and hot dogs) that has gained near mythical status in these parts.  There is often a line to get in the door but the recent announcement that Doug’s will be closing – the owner is retiring – in a few months has driven things into hyperdrive, apparently.  The below photo is PART of the line at 11am on a Friday morning.  And by part, I mean about 1/4 of the line.  It was about 200 people long and stretched all the way down the block. 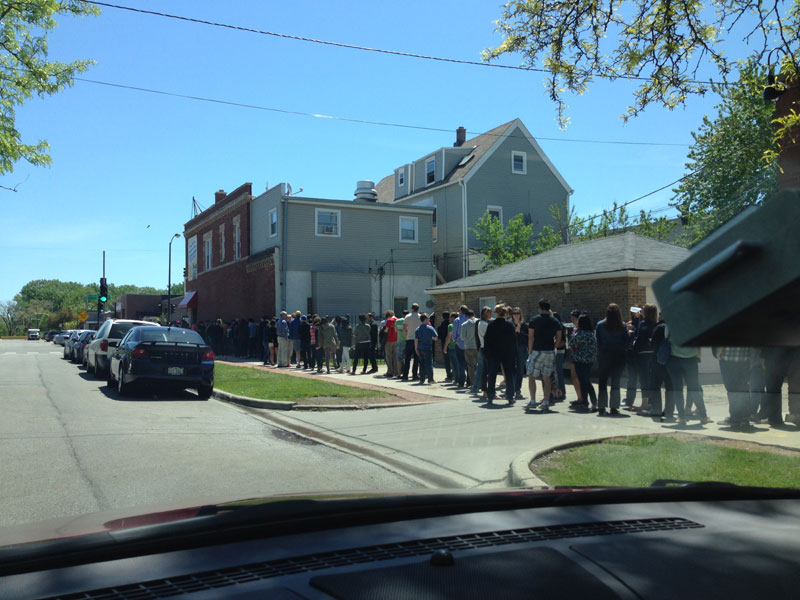 I pulled over about here and ask how long the wait was – a woman told me that she had been in line for “about 2 hours.”  I figure she had another hour to go.

I’m sorry, I think the sausages here are incredible but I wouldn’t wait in line for ANY food for three hours unless it came with a side of gold doubloons.

So instead, I headed off to Johnnie’s Beef, another Chicago institution and another Italian Beef purveyor.  There were about 20 people in line, which I could handle.  The sandwiches are a bit smaller than Portillo’s and the meat hotter (and by that I mean spicy) which I liked a lot.  Hard to compare the two but I’d still give the nod to Portillo’s, although you could always do what I did and have both!! 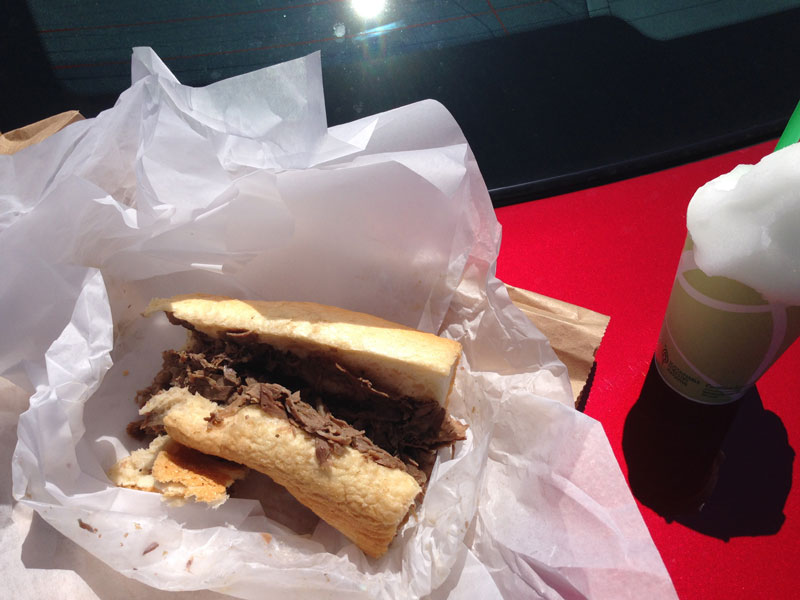 The thing next to the sandwich is an Italian lemonade, which is basically lemon Pledge flavored shaved ice.  I didn’t have much of that.

And yes, I ate it on the trunk of my rental car because there were no tables.  I wasn’t the only one eating in the parking lot.

Next I headed off to the Rivers Casino up by O’Hare airport.  Nice place – just like a Vegas casino with all the usual table games and slots.  It reminded me a lot of Red Rock Resort in terms of design, which is to say lovely.  Had fun, didn’t win, but didn’t lose a lot either so there’s that.

On the way back I stopped for dinner at a place called Smoque, a BBQ join in the Irving Park neighborhood.  Now, you’d think with a name like that it would be some pretentious place posing as a BBQ shack but no – this is the real deal in a lot of different ways.  Rough and tumble inside, basic cement floors and wood tables, a nice patio outside, order at the counter, and go get it yourself when they scream your number.

I have been thinking a lot about this since I ate here.  I’m a total BBQ snob – I have eaten a lot of it and I know good ‘que when I taste it.  I have a list of bests and favorites – Arthur Bryant’s in Kansas City; Poole’s BBQ in East Elijay, Georgia; that little shack we stopped at in god-know’s-where-Arkansas on one of our Plucky trips.   But I really think that Smoque smokes them all.  This was fantastic, unbelievable, delicious, perfect BBQ.  I had the Texas sausage, two huge not-too-spicy links plus two sides (mac and cheese and cornbread) plus a side of pulled pork and slaw.  The sausage was insanely flavorful – dripping with juices, expertly cooked, and perfect for dipping into one of their two signature sauces – a vinegar one and a sweet one, both of which were not too much of either.

And pulled pork… oh sweet heaven, it practically melted in my mouth it was so tender.  Everything was amazing and I can’t recommend it enough. 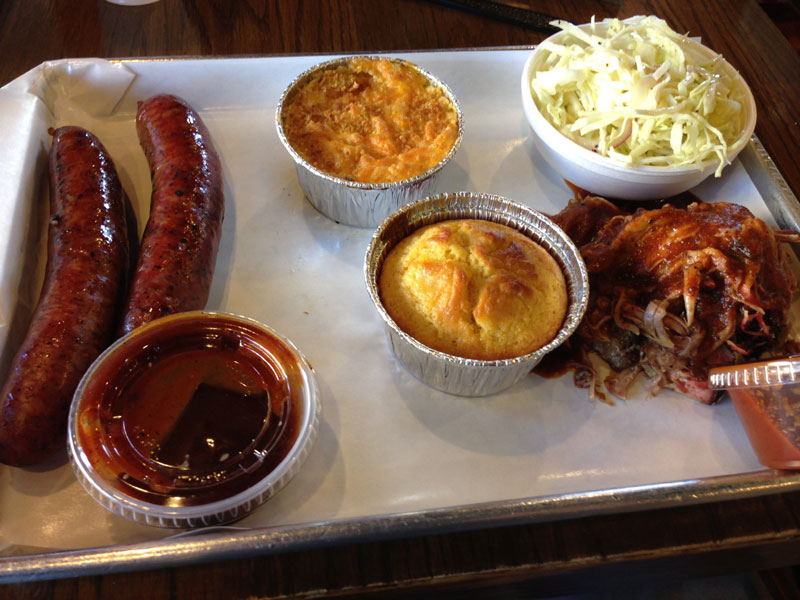