The Year of Living Differently: Georgia on My Mind Day 5 (More Savannah)

I had the following thought last night: I’m staying in a hotel with no room service, no mini-bar, and no in-room movies.  I might as well be camping.

Yes, I am that spoiled by Vegas hotel rooms and heir non-stop menu of amenities and services.  I really need to get out more.

And I did, again, today, with a rearranged itinerary that I cobbled together after rescheduling the trolley tour I was planning on taking yesterday that was cancelled at the last moment.  The company behind the tours picked me up promptly at 9:30 from the hotel and took me to the saddest offices ever (mismatched chairs in the waiting room from roundly 1983 and carpeting from roughly the same era).  At 10am our tour guide, Jefferson (he swears that is his real name) walked in wearing full Civil War regalia… and sneakers.

He loaded the half-dozen or so of us on a fully enclosed, air-conditioned bus – not the open-air trolleys that I was expecting.  This was both a good thing and a bad thing in that it was already roughly 900 million degrees and it was raining early this morning but also a bit of a bummer in that it made taking pictures through the fixed windows almost impossible.

Jefferson had been doing tours for 24 years after getting his degree in history and doing some work at the Georgia Historical Foundation.  He was an odd duck, to say the least.  He spoke with exaggerated elocution – “under the statue on the righ-TUH is believe-DUH to be the bah-DEE of Jame-ZUH Oglethor-PUH, the founde-RRR of Savannah.”  His script, which was completely memorized, featured various quotes form diaries and papers of the era he was covering, which he would do in a slightly different voice.  “As the general said, ‘I view them the way I view sheep droppings – just as prevalent and about the same size.’  – General Such and Such, February, 1861.”  He would literally say all of those words and do the quotation in sort of an exaggerated southern growl.  It was highly entertaining but not in the way he meant it to be, I think.

The tour was very heavy on the histories of the various people that were important to Savannah history and less so on the buildings and neighborhoods and landmarks, which is what I was more interested in.  But I did still learn some new and interesting stuff.

Early settlers had very little regard for their dead and so when they wanted to build something on a place where they had buried people, they didn’t bother moving the bodies.  Therefore there are several buildings and even a road that are on top of gravesites.

Each of Savannah’s historic squares (21 of the original 24 still exist) are the centerpieces of wards; neighborhoods that were built around the squares as the city expanded, so the historic core of the city is made up of a series of interlocking wards instead of one big district.

Lawyers were not allowed to practice in early Georgia.  This became a problem later on when someone important got into some legal trouble.

One of the most fascinating neighborhoods is the Beach Institute district, so named for the school in the area that was founded by Alfred Beach.  Located just a couple of blocks from the Troup ward, where the Armillary stands, this neighborhood was the first built specifically for the freed black slaves after the Civil War.  The houses there, while now lovingly restored and going for ridiculous amounts of money, are a stark contrast to the imposing mansions and brownstones in what was the white neighborhoods nearby.

The tour was supposed to last three hours but when we took a break at about 90 minutes in I politely made up an excuse about being invited to a lunch and bailed on the second half.  I walked back to the hotel and snapped some more pictures of the upper level of Factor’s Row, with its iron bridges and lots of monuments and memorials. This town really likes monuments and memorials. 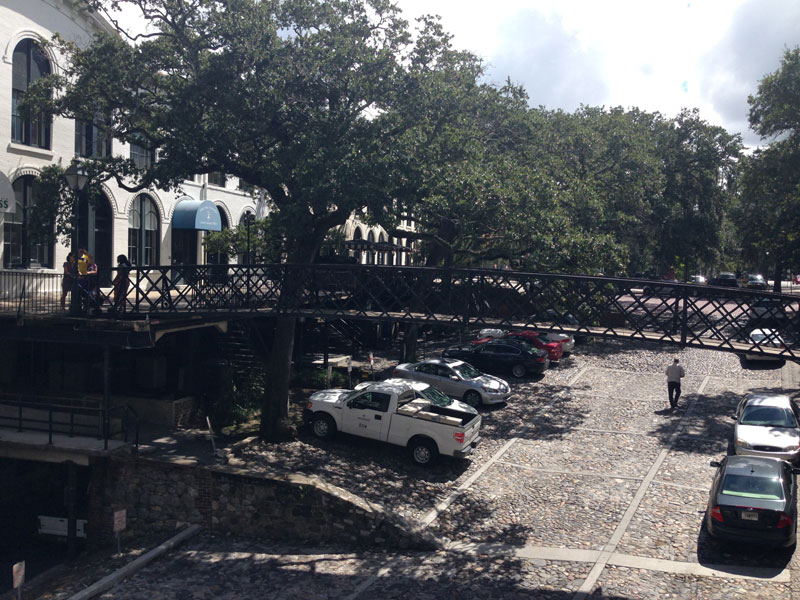 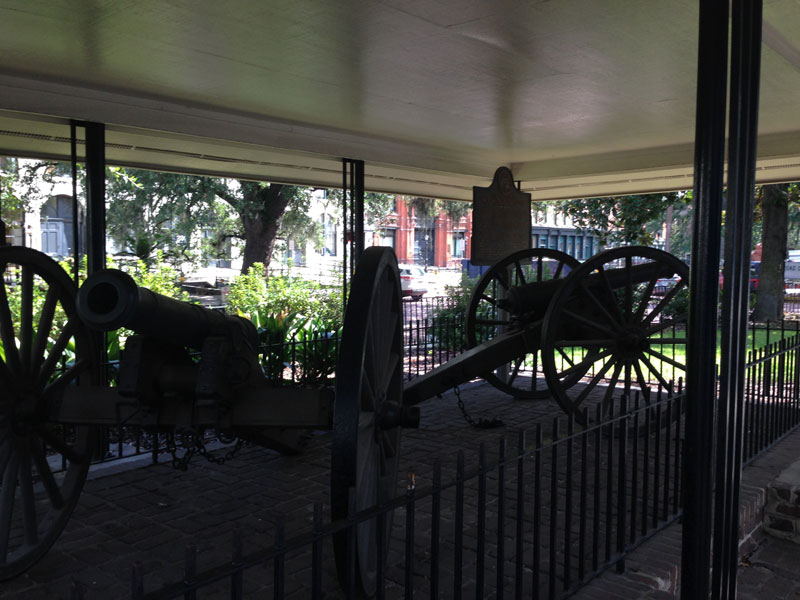 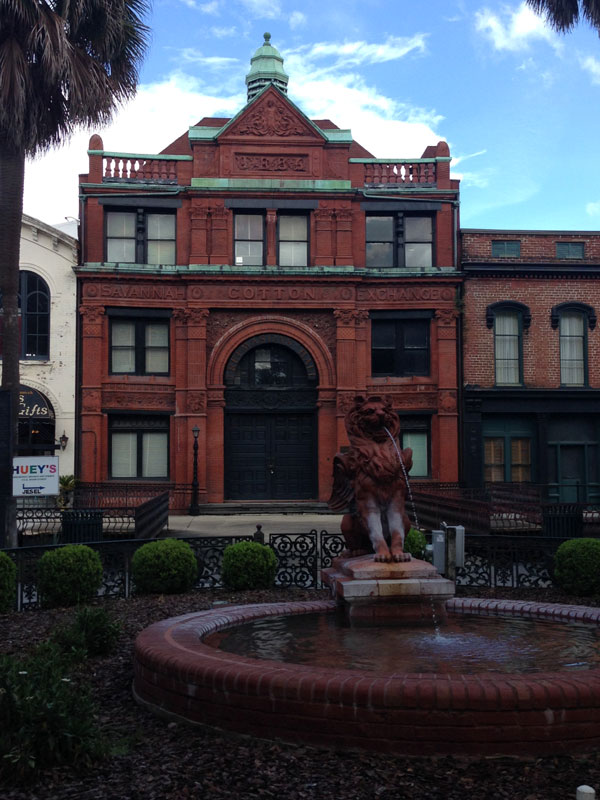 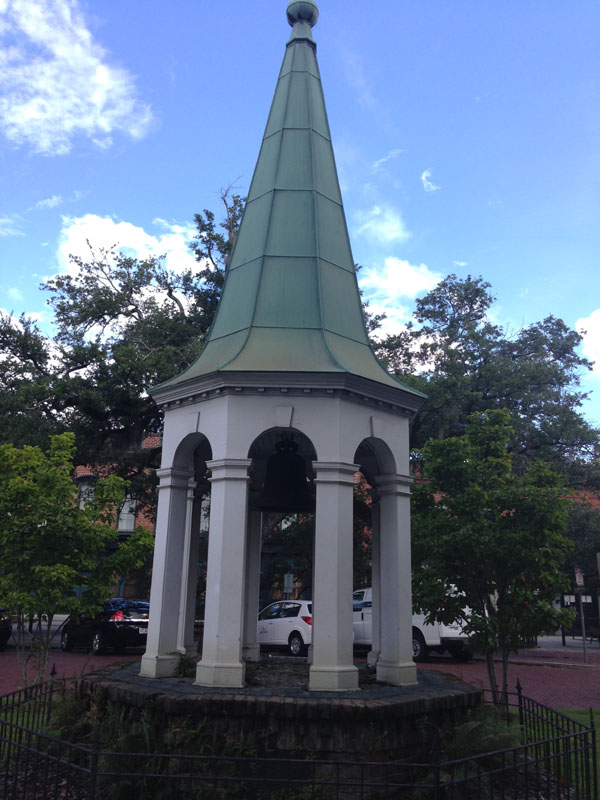 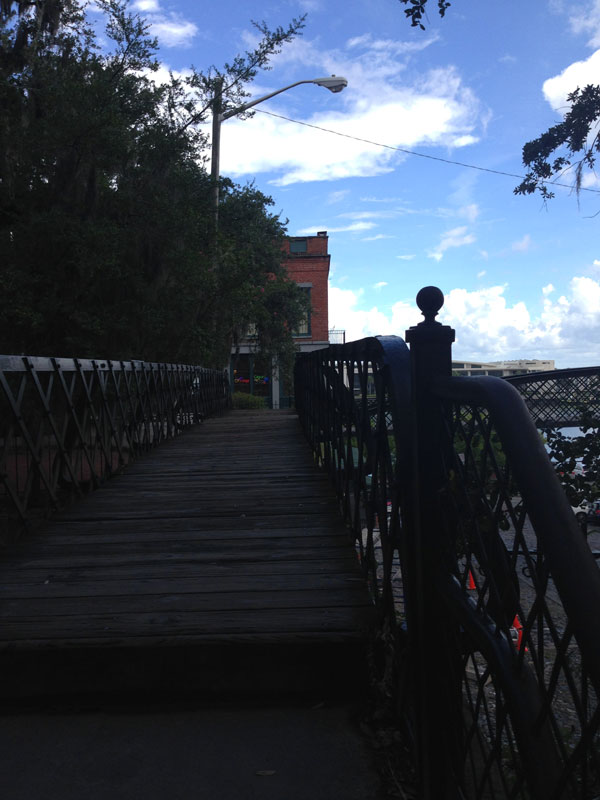 I obviously hadn’t been invited to lunch but I did have a restaurant I wanted to go to – Sandfly BBQ – billed as one of the two best BBQ joints in the city according to most of the faceless Internet people in the know.  Located in a little strip mall, it wasn’t much on personality, either in terms of the décor or the kind of surly people who worked there (one heavily tattooed young woman reminded me a lot of April on “Parks and Recreation”), but the food was terrific.  I got a pulled pork platter with a side of mac and cheese and fries plus a sampling of their smoked sausage.  The pork was great but the sausage was perfection, juicy and a little spicy.  They had three different sauces – a mustard, a heavy vinegar, and one that some would probably describe as sweet but that I would describe as slightly less heavy vinegar.  It was still good. 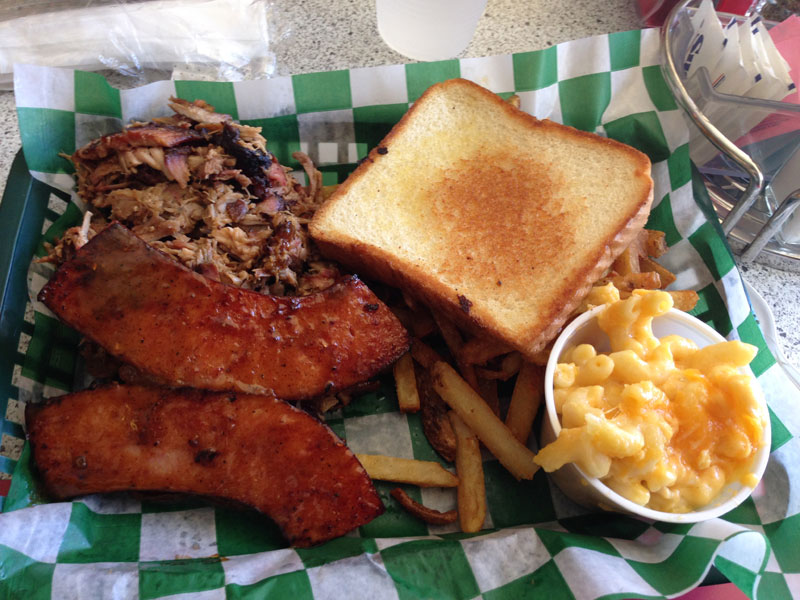 By the way, someone asked me how I am able to eat all of this, especially with my limited eating capacity.  It’s simple: I don’t eat all of this.  I have a few bites of everything and then I walk away, often wasting huge amounts of food and feeling personally responsible for starvation in Africa.

After lunch I headed out to the Pin Point Heritage Museum, which I had read about as being one of the most fascinating little historical attractions in the area – whoever wrote that was right.

Pin Point was (and still is to some degree) a little neighborhood on the east side of the mainland, along the marshes that spill out to the rivers and islands that separate Savannah proper from the Atlantic Ocean.  Much like the Beach Institute neighborhood, it was founded after the Civil War as an area for freed black slaves and was predominantly a “factory town” for the AS Varn & Sons oyster and crab factory.  Populated almost exclusively by people from West Africa, the community had a native language, Gullah, which is sort of like Creole dialects of English – chirren is children for example – and their own customs.

The museum has taken the old factory and turned it into a fascinating interpretive center that relates the history of the community, goes into extensive detail about the oyster and crab picking work that was done here, and the people who lived here (some of whom still do).  It has terrific interactivity including several places with pictures of people who used to work there and buttons you can push to hear them talking about their experiences.

Among the many fascinating bits was the detail about the community’s burial customs.  When someone died, they would often take various food to the gravesite for 30 days as a way of easing the spirit into the next realm and it was said that the last person who died watched over the cemetery until the next person was interred.

It’s a terrific little facility and I highly recommend it if you are ever out this way.  The travelogue continues after the photos. 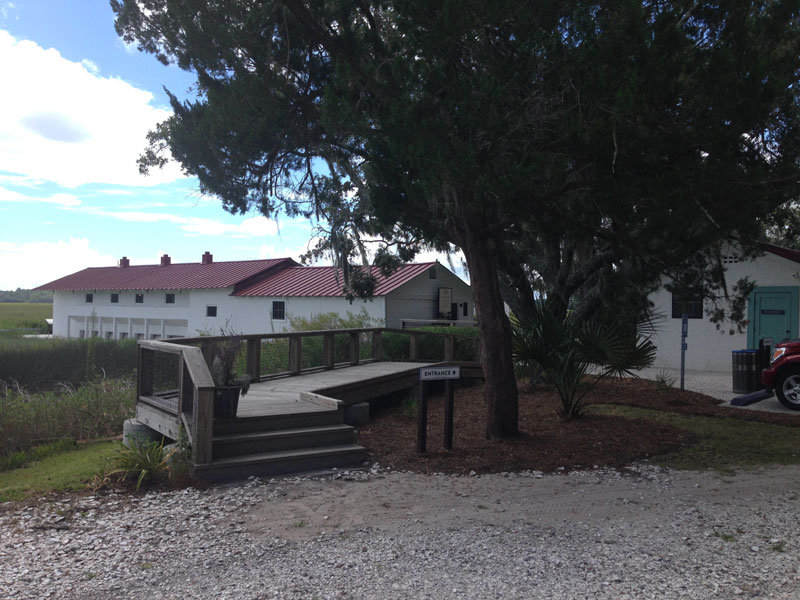 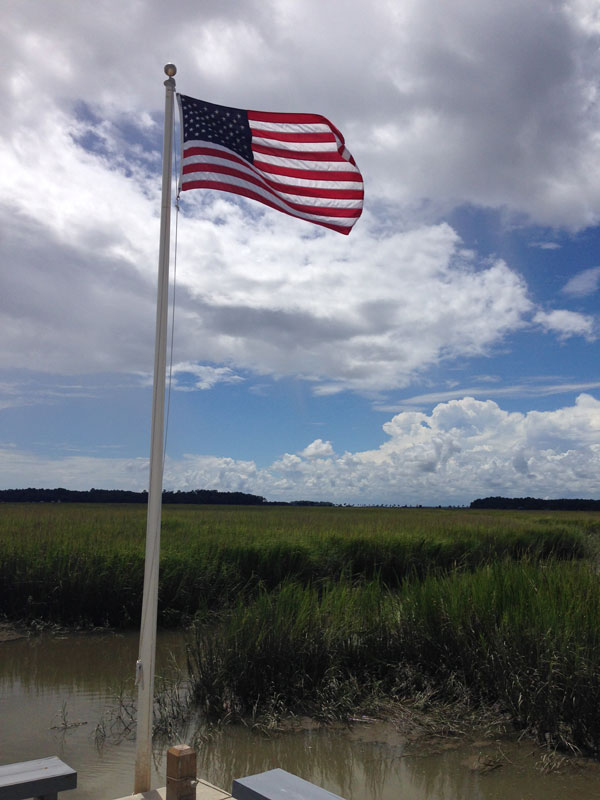 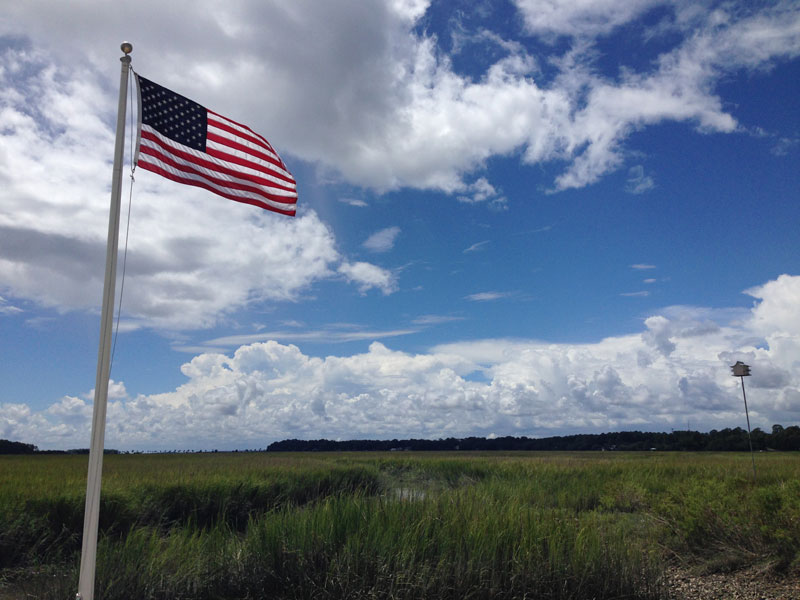 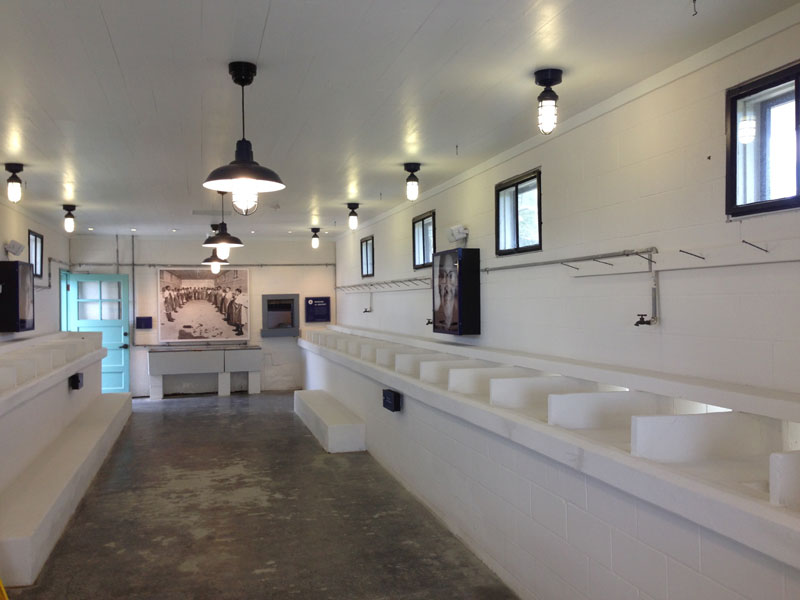 After that I went out to Tybee Island, which acts as Savannah’s beach community.  My first stop was at the Tybee Island Lighthouse and Museum, the latter of which was closed as they prepared it for a fundraising event that night.  But the lighthouse and the light keeper’s houses were open for touring so I tried to shake off the dumb amount of BBQ I had just eaten and started trudging up 175 stairs.  I made it, barely, but then couldn’t go out on the tiny little two-foot wide catwalk.  Have I mentioned how terrified of heights I am?  I took one step out and immediately felt like the entire thing was tipping over and I was sure I was going to fall.  In hindsight I hear Mel Brooks singing “High Anxiety.” 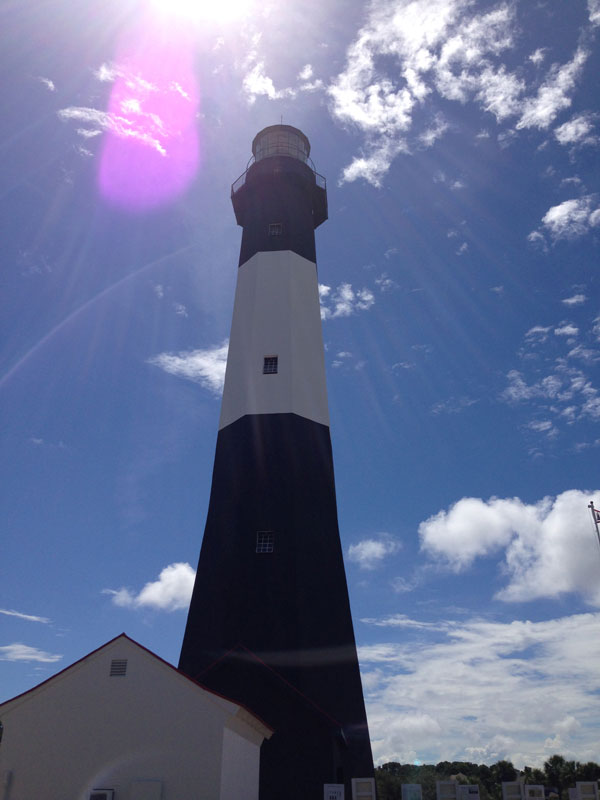 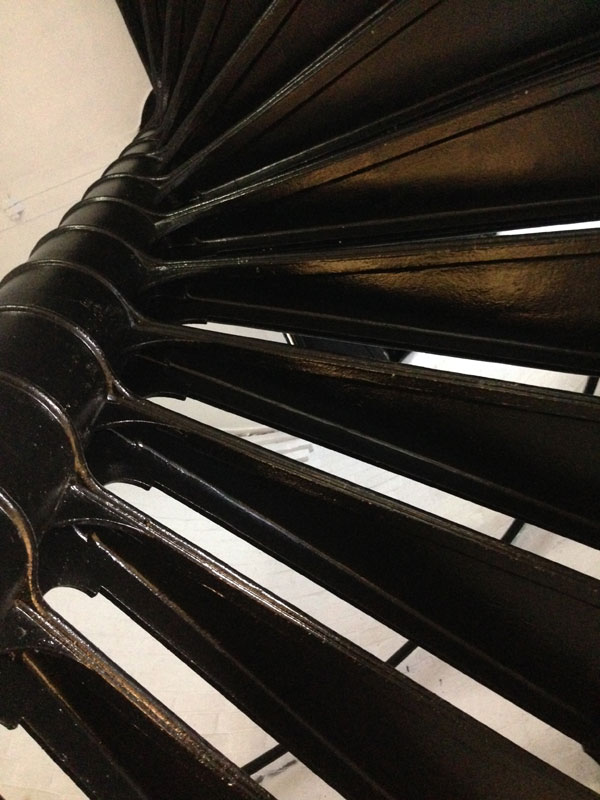 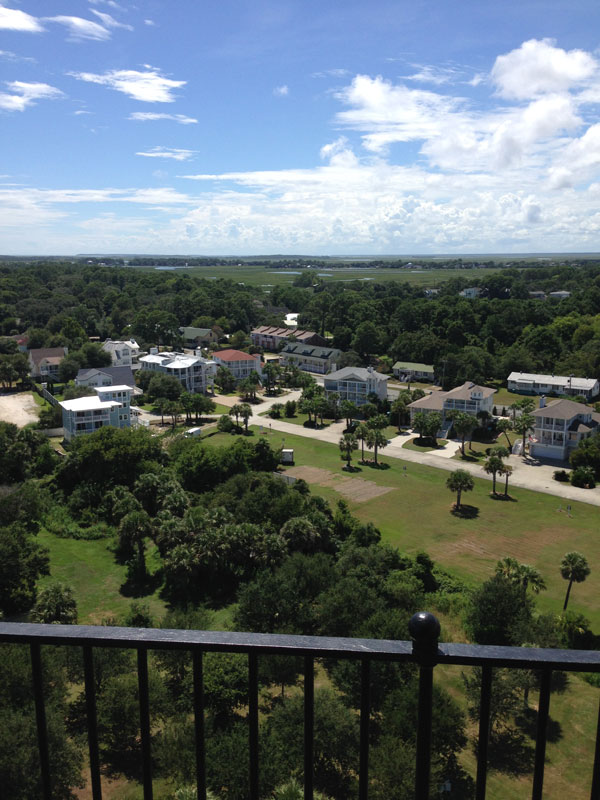 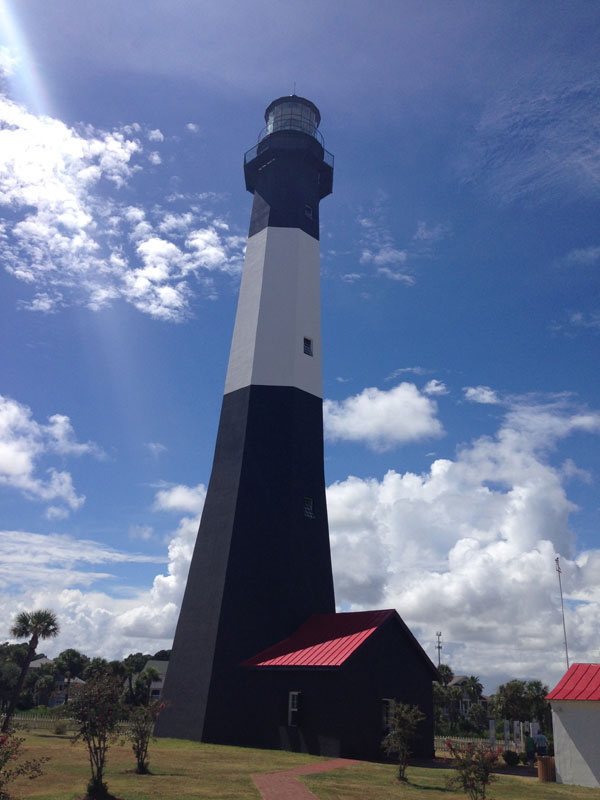 I couple of miles down the road is the highly typical tourist beach town, with its endless line of souvenir and clothing shops, overpriced party bars, and seafood restaurants.  If you have ever been to a place like Myrtle Beach, you have absolutely no need to come here.  Still, the ocean, which is nice.

More after the photos. 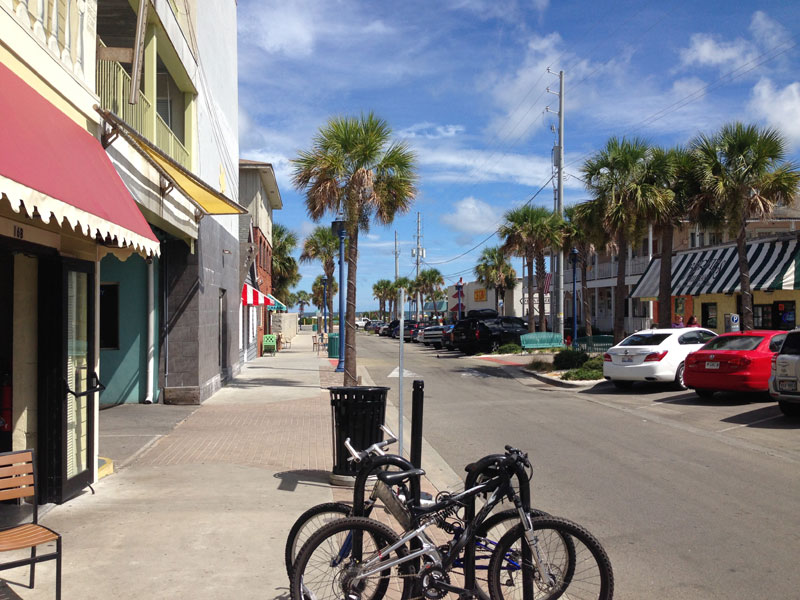 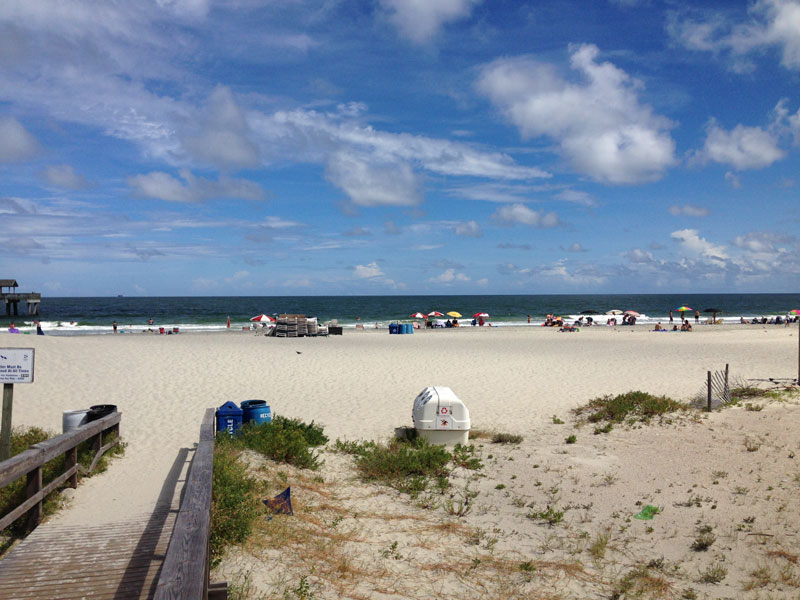 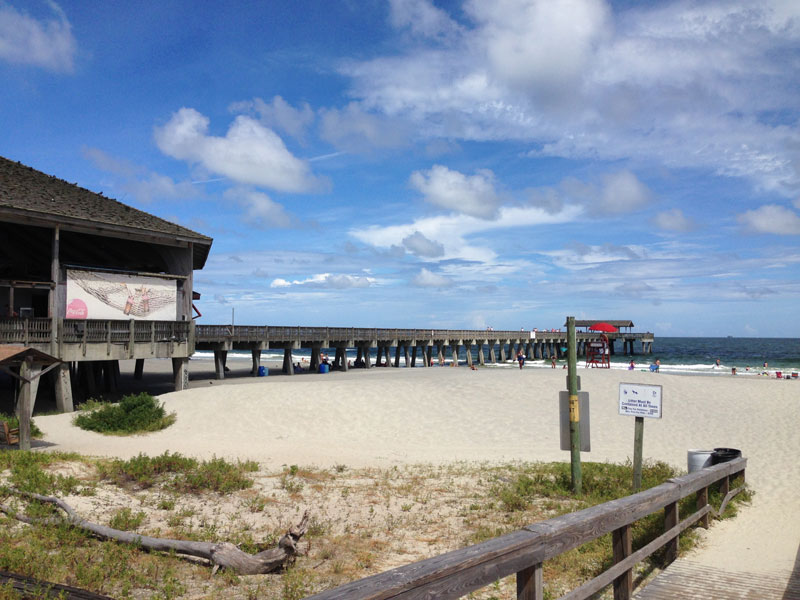 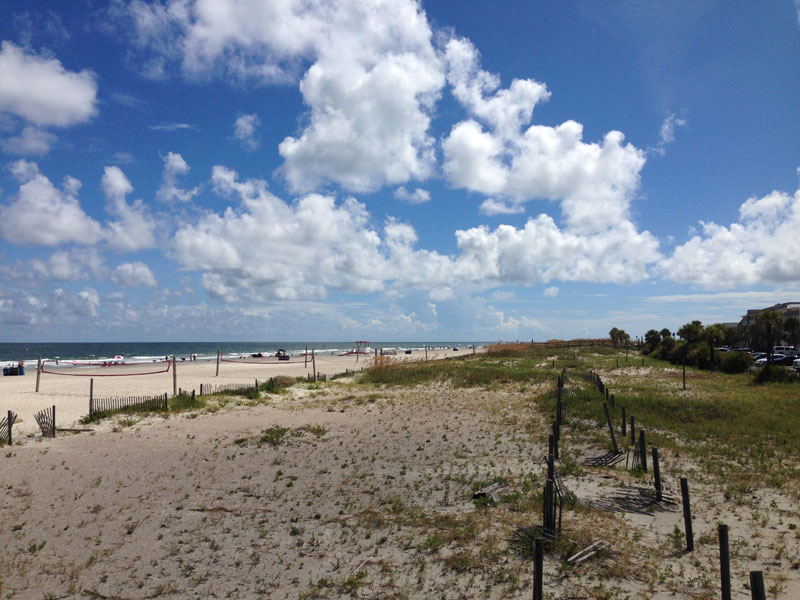 I headed back to the hotel and, now that I’m 48, promptly took a nap.  I’m not ashamed at all.

Tonight was the Savannah Fashion Night, where they take over several blocks of Broughton Street for a festival focused on fashion and art.  By the time I got out there they were pretty much shutting it down but for some reason I’m getting the feeling that I didn’t really miss much.  The people that were left on the street were a strange mixture of artsy students from the Savannah College of Art & Design, and good ol’ boys with plastic cups of beer.

So instead we – oh I should explain we – the night before I met a guy named Junior – no he’s not a good ol’ boy from the south, he’s actually from Toronto originally but moved to rural Georgia a few months ago.  He’s in town visiting friends and family for his birthday as well – one day after mine – and we bonded over shared Virgo traits.  He came out with me Thursday night and we went to Club One where they were having a drag show, but unfortunately not from The Lady Chablis.  She gained a measure of fame after being featured in the book and movie “Midnight in the Garden of Good and Evil” and performs at the club regularly – just not when I’m going to be here.

The ladies on the bill were your fairly standard drag queen types with one exception pictured below.  She came out, whirling and twirling, and literally ran down the dance floor and ended in a full split.  I’ve never seen anything like it and wish I had my camera out when that happened.  Instead all I could catch was this: 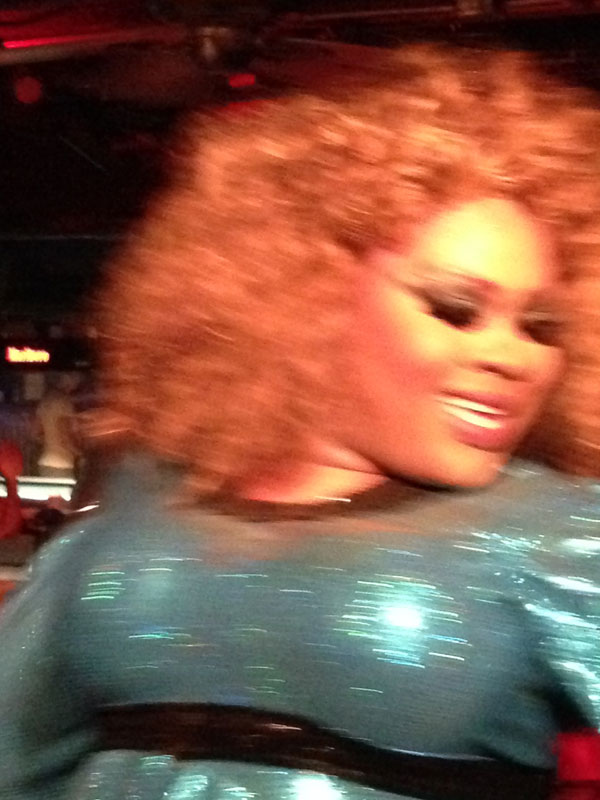 Tomorrow is my last full day in Savannah and I’ll be doing the Railroad Museum, out for a hamburger, and Bonaventure Cemetery plus what I’m hoping will be the pinnacle of the week – Bacon Fest!!