The Year of Living Differently: Georgia on My Mind Day 6 (Last Day in Savannah)

My last full day in Savannah – that makes me a little sad, I have to admit.  I can’t tell you how much I am in love with this city.  I mean, I liked it before after my two brief visits years ago but now I love it.  There’s something special about this place that is a little difficult to explain but once you are here you immediately feel it.  It’s what Mary and others I know feel about New Orleans, which I also enjoy but not in the way I do Savannah.  At a minimum I am now going to make Savannah my official birthday destination each year.

My friend Junior accompanied me on my first stop of the day, the Georgia Railroad Museum.  Located just a few blocks off the historic district, it was a working railroad repair facility until 1960.  It was restored in the 1990s and 2000s and is now considered to be the biggest antebellum era train yard in existence.  There is what’s left of a roundhouse (about half of it was saved), a turntable, several buildings, a smokestack, and lots of train cars – engines, box cars, passenger cars, cabooses (caboosi?), and more.  They have demonstrations and tours all day long including a brief train raid around the yard, which we took.

The actual trains are cool – lots of kids at the place who were agape in glee – but for me the best part was the model railroad exhibit.  I had model trains when I was a kid – a complete set up in the basement with multiple tracks, a town with buildings and working street lights, trees and a faux river.  I would spend hours down there playing and making up various adventures of the fictional people that I had living there. 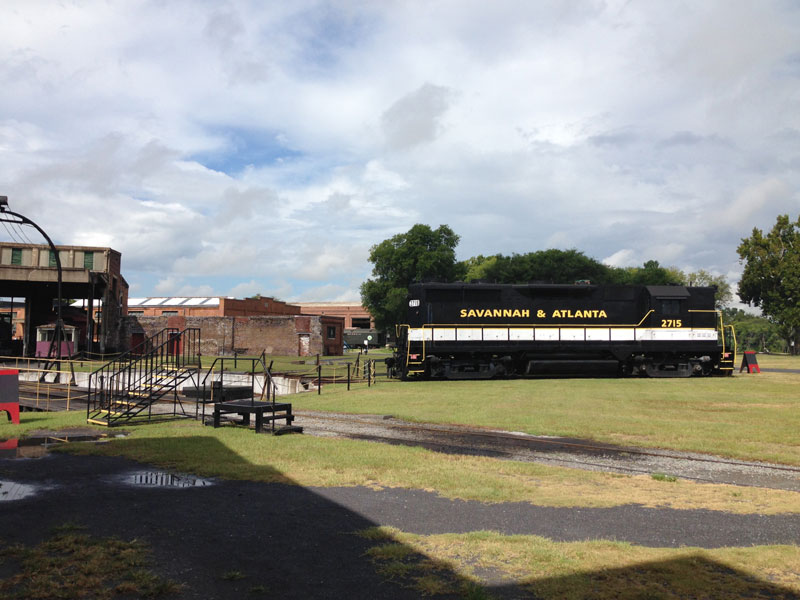 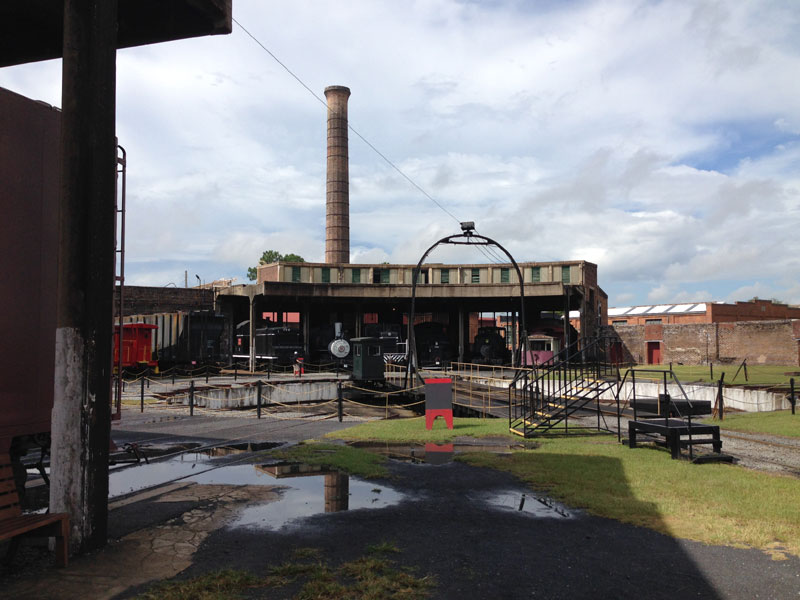 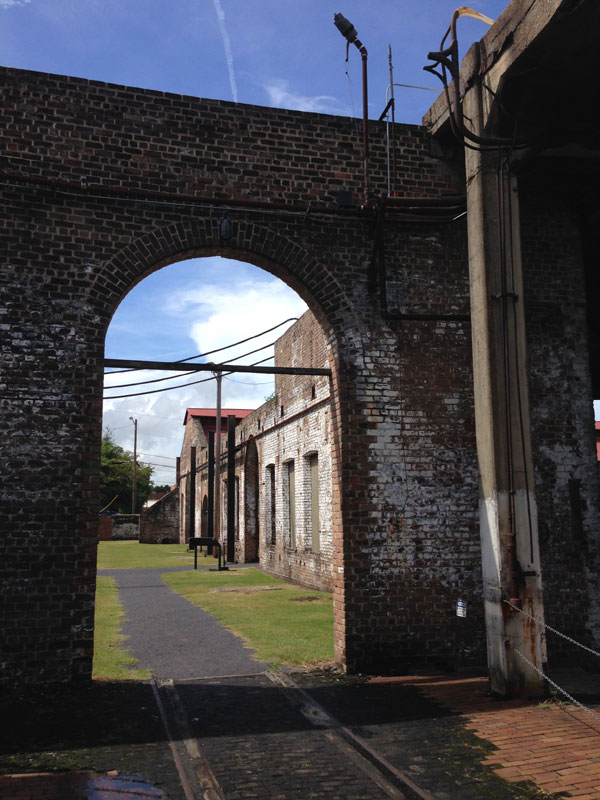 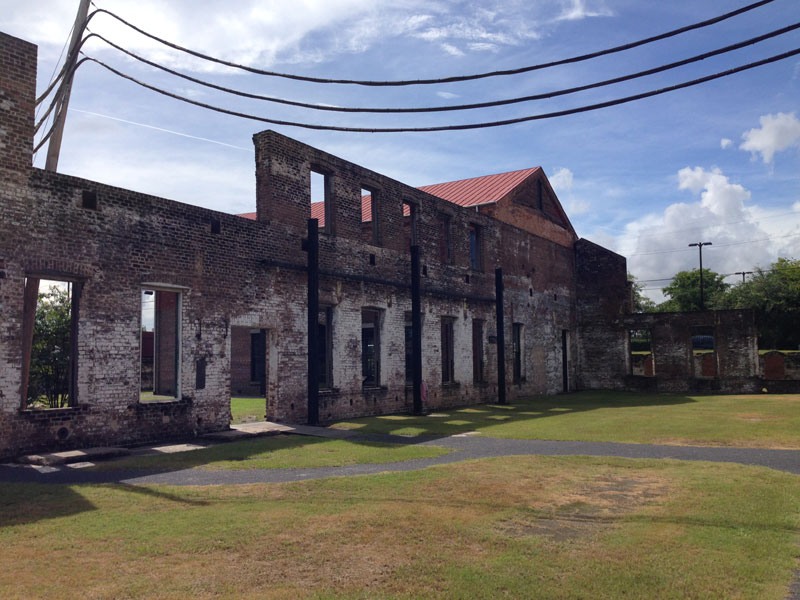 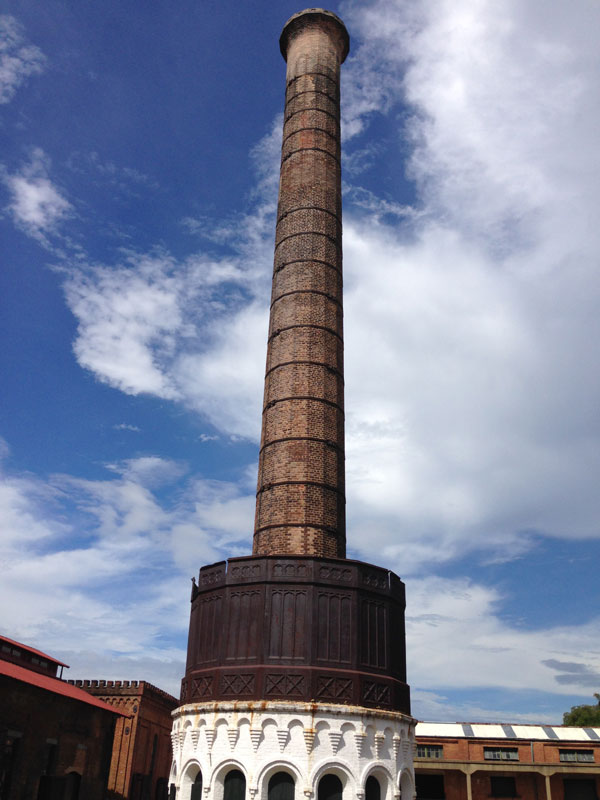 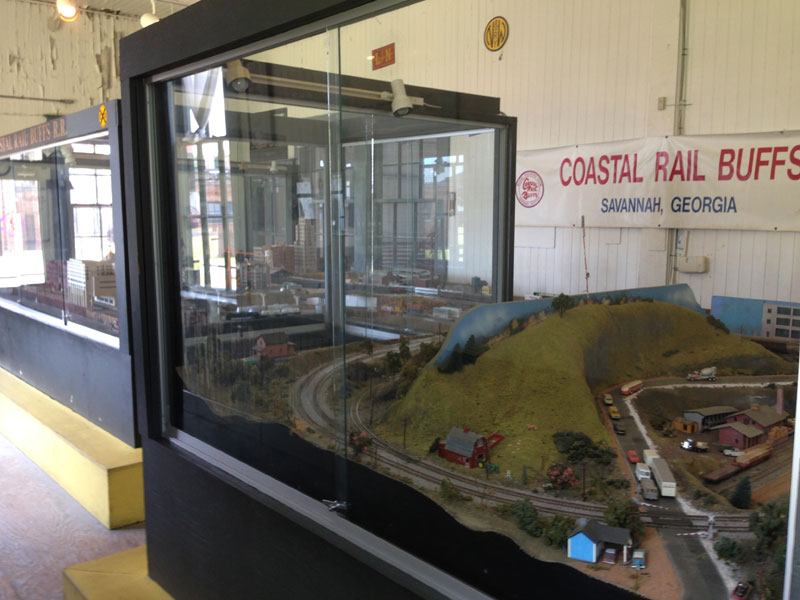 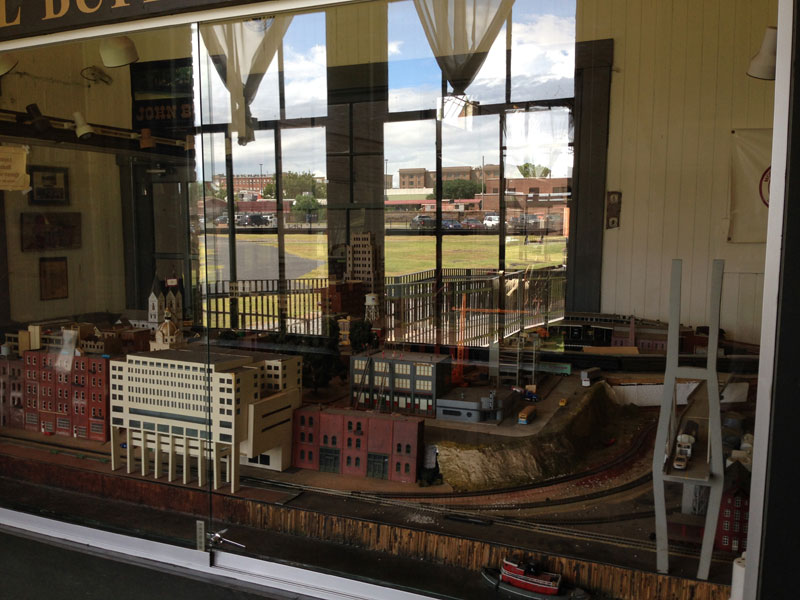 After that it was time to say goodbye to Junior who was heading back home today, although he might come up to Atlanta tomorrow to meet me so that will be fun.

I headed out to have lunch at a place called the Green Truck Pub, a diner that is reported to have the best burgers in the city. Challenge accepted!  They have a lot of different varieties but I finally settled on the Trailer Park, a burger with bacon, lettuce, tomato, onion, and house made pimento cheese.  Damn good burger but next time I think I’ll go for the Farm House, which comes with a fried egg on top. 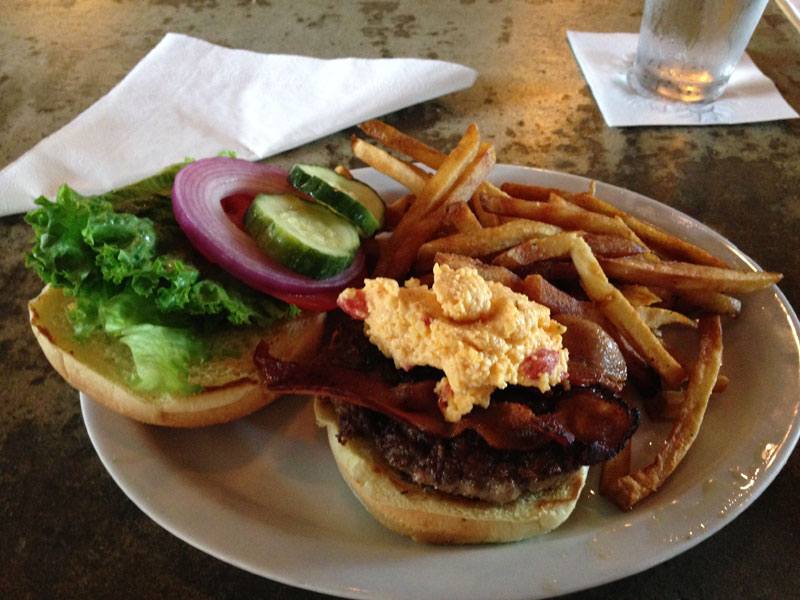 After lunch I took another trip to Bonaventure Cemetery.  Mary and I had been here back in 2008 when we visited on Plucky Survivors, finding the graves of Johnny Mercer, Jim Williams, and Danny Hansford, the latter two of which are the alleged murderer and murderee whose stories are told in the book Midnight in the Garden of Good and Evil.  It has to be one of the most beautiful graveyards in the world and I wanted to get another look because a scene in my book takes place here. 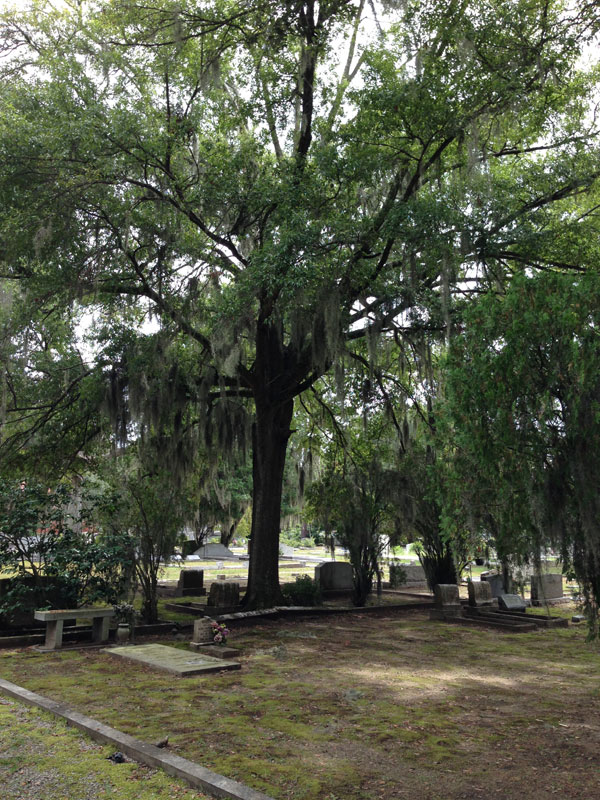 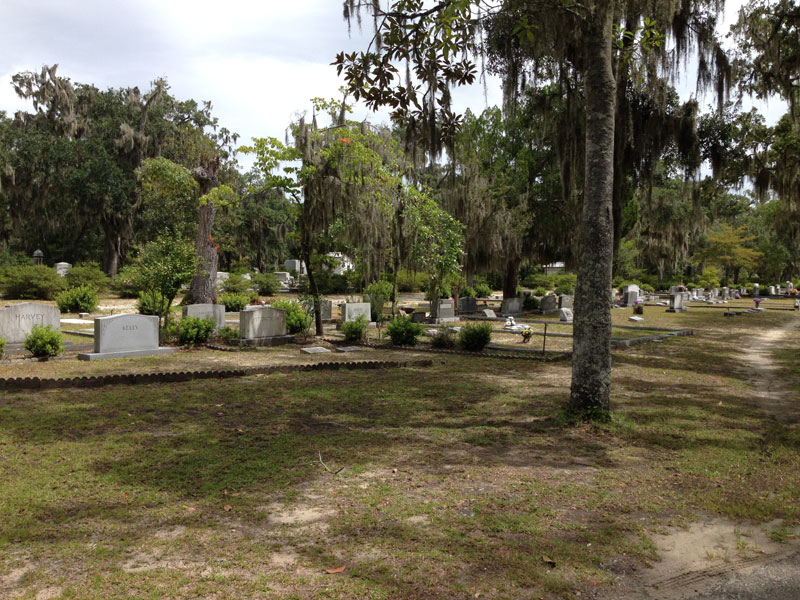 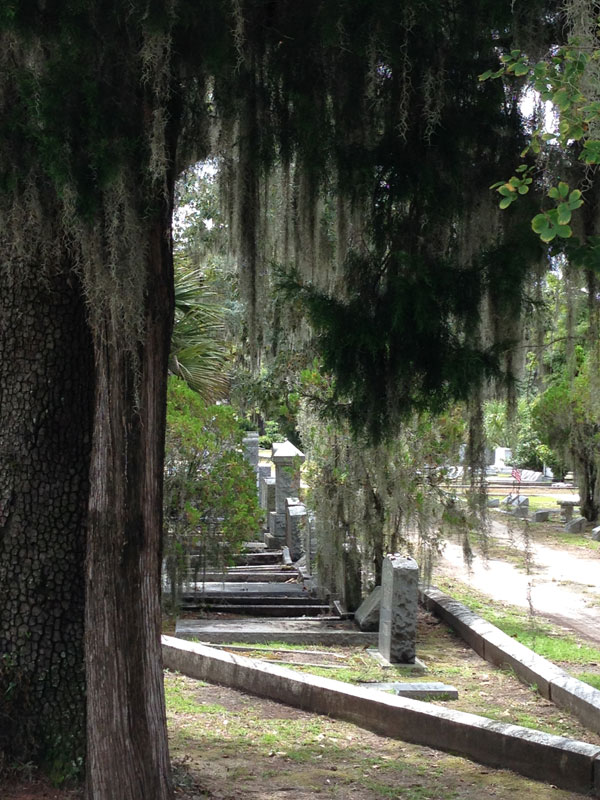 I spent some time relaxing back at the hotel and then walked down to the Savannah’s First Friday festival, which is held on the first Friday and Saturday of each month and has a different theme every time.  September’s theme was bacon!  I wanted to come just because of that but it was really the official commemorative t-shirts that sold me: 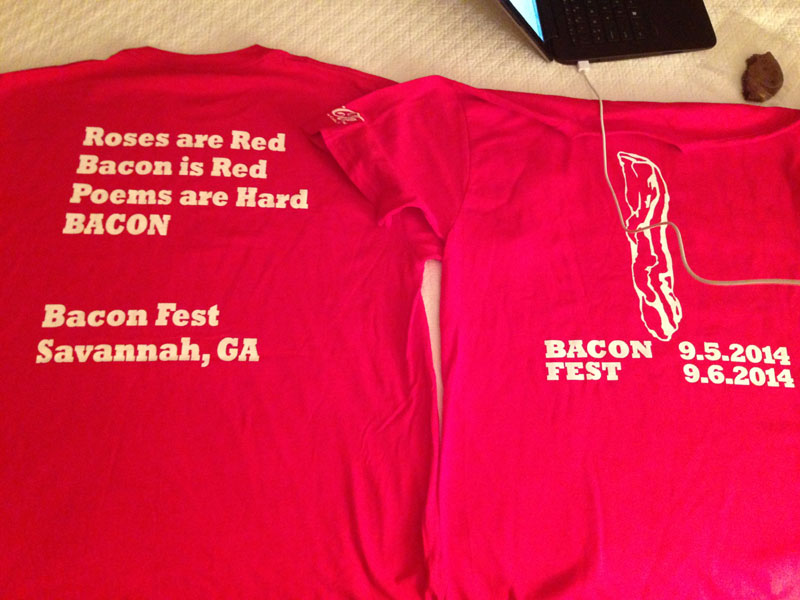 The festival took up several blocks of the waterfront plaza along lower River Street and had arts and other retail vendors, your typical street fair type tents (face painting, temporary tattoos, etc.), and mechanical bull that had been changed into a mechanical bucking pig (genius!), music, pig trivia games, stuffed toy pig races, and much more.   The story continues after the photos. 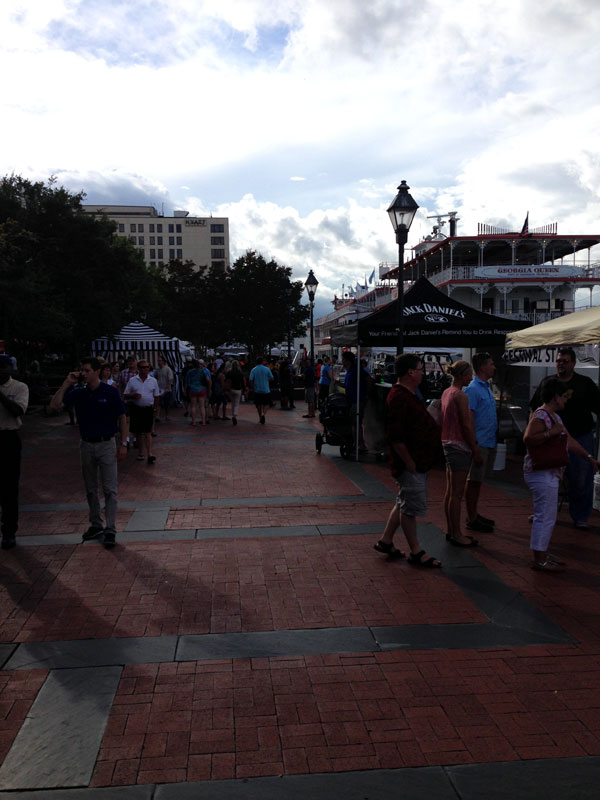 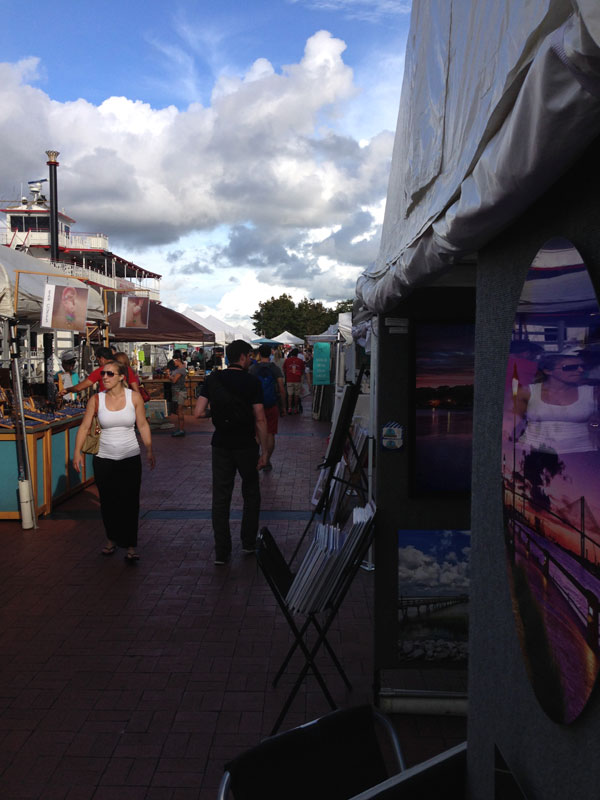 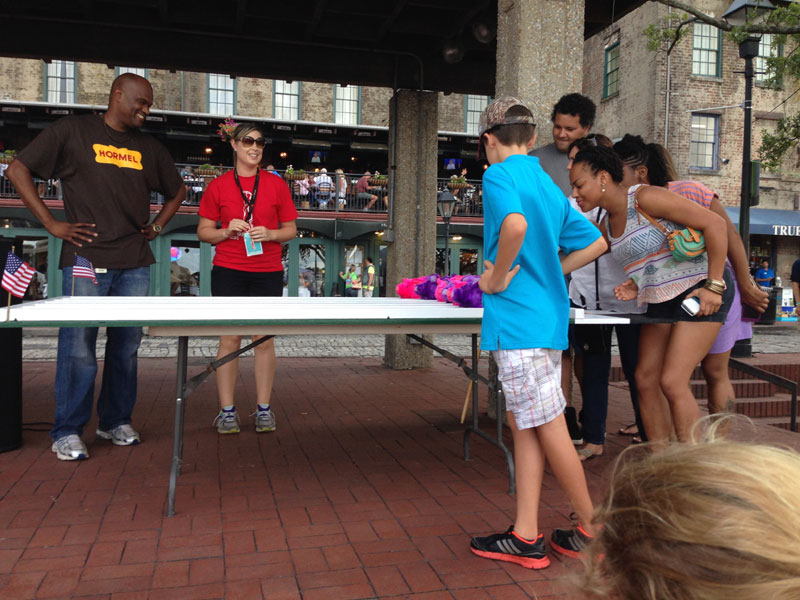 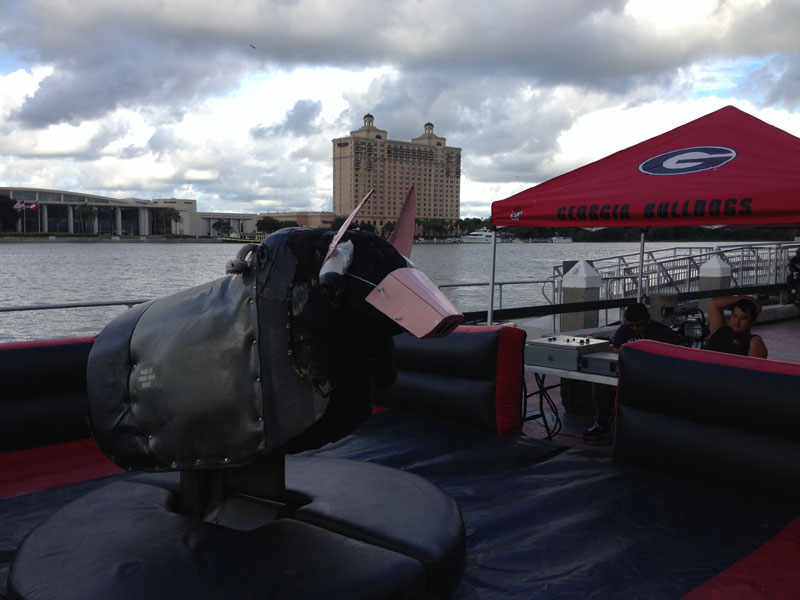 And of course there was food – tons of food, all with at least a nod to bacon.  The things I didn’t get around to trying included bacon ice cream, bacon brownies with caramel sauce, bacon biscuits, candied bacon, Kevin Bacon and egg truffles (a white chocolate truffle shaped like a deviled egg with a picture of Kevin Bacon on it – come on! That’s funny!), and so much more that I lost track.

What I did have is a cherry glazed bacon pop – basically several chunks of bacon on a stick: 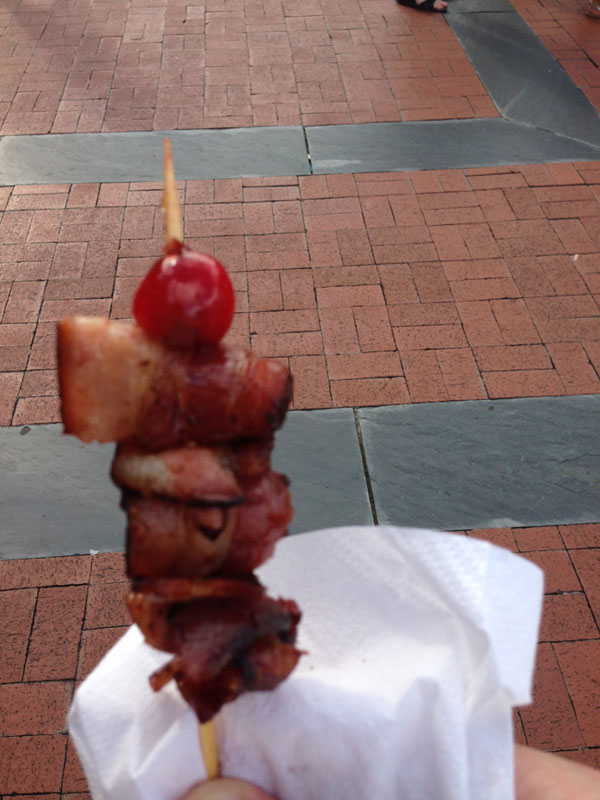 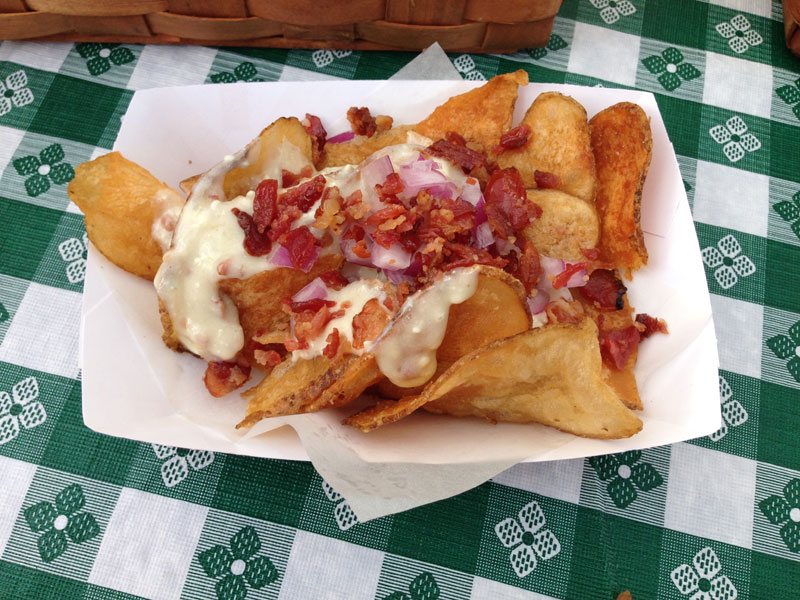 A jalapeno stuffed with bacon and cheese: 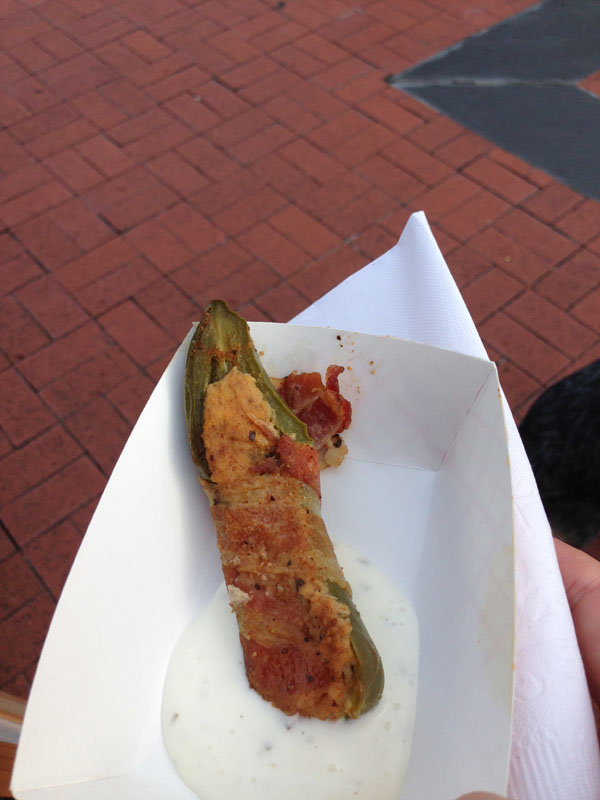 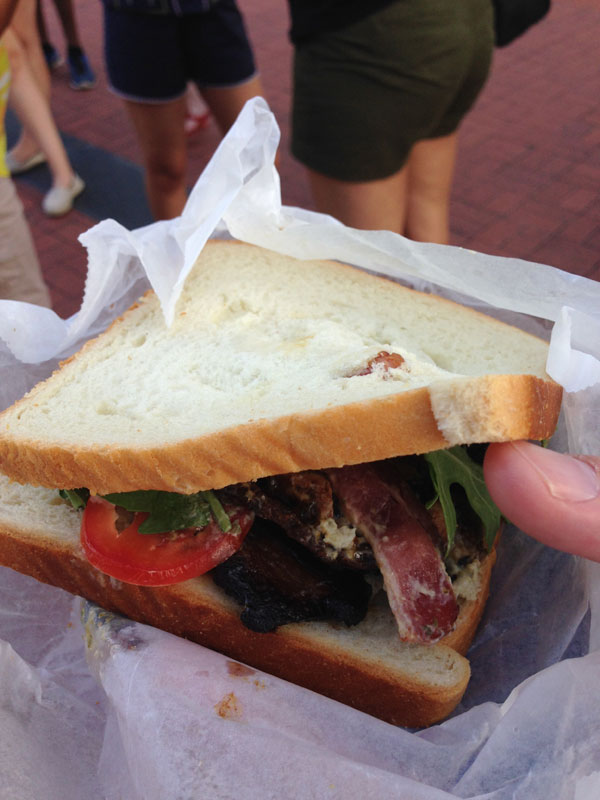 And a bacon wrapped hot dog: 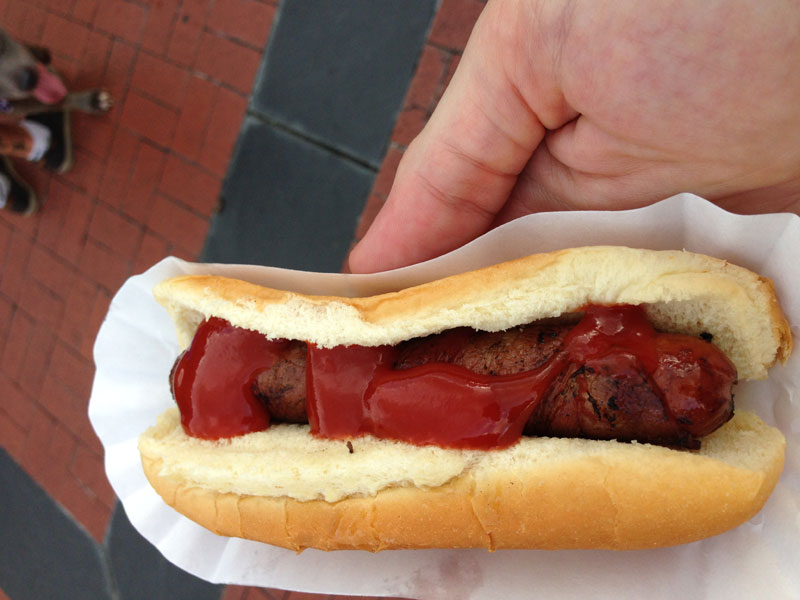 What happened next really should not be surprising considering my often delicate gastrointestinal system.  Now, mind you, I didn’t eat all of any of the above but I think the week of stupid rich food capped off by a meat frenzy finally kicked my intestines off the island, so to speak. Did you ever see Bridesmaids?  Remember that scene where a lunch at a sketchy Brazilian restaurant ended indelicately with Maya Rudolph’s character in the middle of the street wearing a wedding dress?  That’s all I could think of as I was rushing the four blocks back to the hotel.

After laying down for a few hours I felt better so I headed back down to the festival to watch the fireworks over the Savannah River.  It was a great way to end the night and a perfect way to finish off my visit to what is now, officially, my favorite place in the world.

Tomorrow I’ll be heading back to Atlanta and then back home on Sunday.   Not sure if I’ll have any more to post, but if not, thanks for reading along. 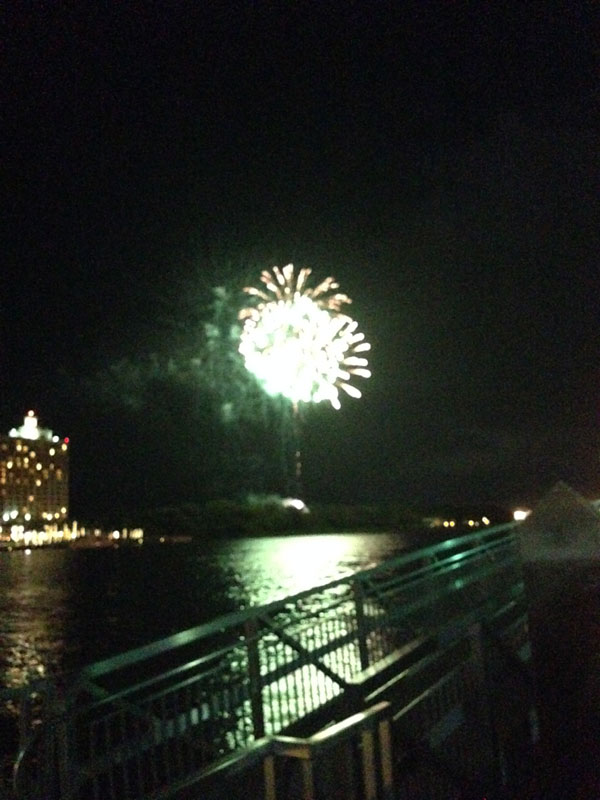 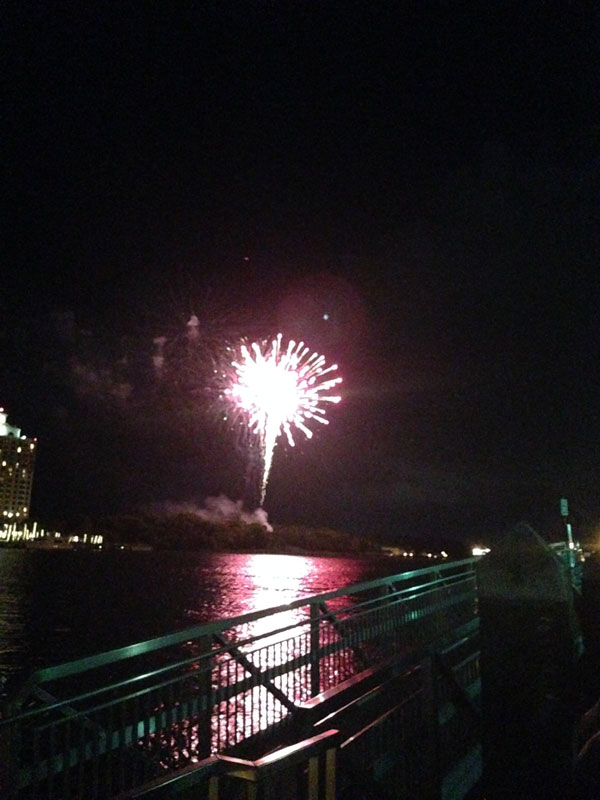 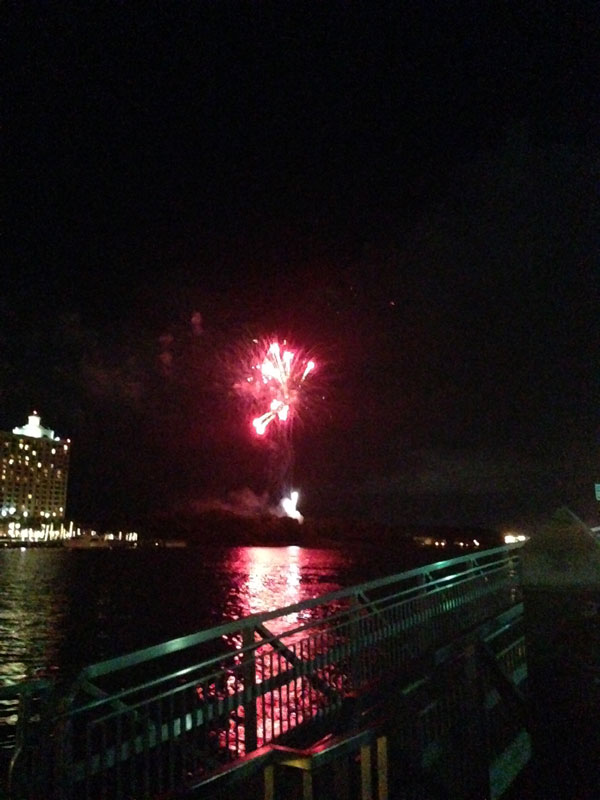 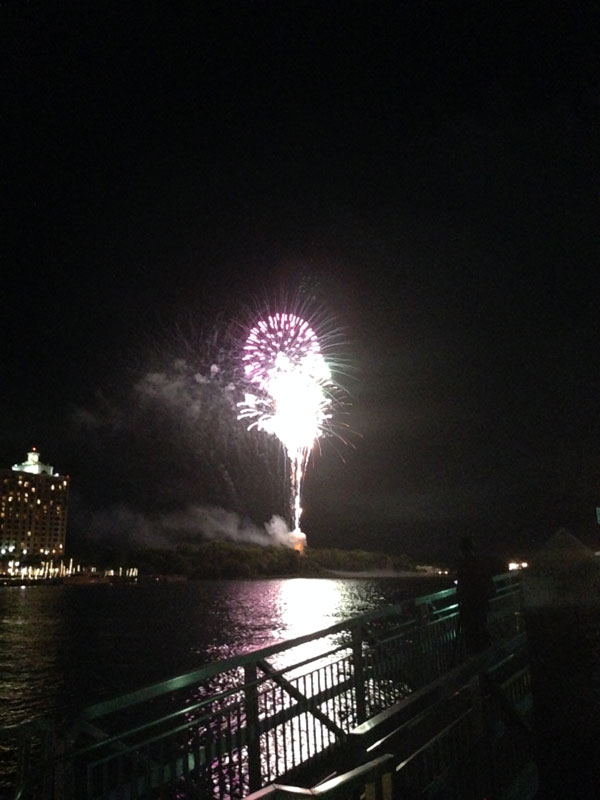