The Year of Living Differently: Georgia on My Mind Day 1 (Atlanta)

Why are you going there?

That has been the most common question I have received when I told people I was going to Atlanta and Savannah for my birthday vacation.

The reasons are long and varied.  Food is a big part of it – I love southern food and haven’t had a good fix in many years.  But beyond that, Atlanta is fun and Savannah is one of the most beautiful cities in the world.

Plus, the new novel I just wrote is set in Savannah so I’ll be going to see all the things I wrote about but haven’t actually visited before.  I’ve been to Savannah but not to some of the specific places I put in the book.

Besides, it’s my birthday, and I’ll go wherever I damn well please.

It was a very uneventful flight from Los Angeles.  The last time I flew Delta I swore I would never do it again but this time was quite lovely, with good service, comfortable seats, and an arrival 10 minutes ahead of time.  The only oddity was the woman who was seated next to me who, through some mix up at the ticketing window, had been seated in row 30 (economy plus) while her husband was in row 52 (coach).  Apparently this was a tragedy of almost epic proportions.  First, she asked both me and the woman on the other side of her to switch seats with her husband so they could sit together.  Hmmm… trade an economy plus window seat for a middle coach seat?  No thank you.

Then she spent the last 10 minutes of the time on the ground furiously texting her husband and the next 15 minutes after that shifting in her seat to look back behind her.

Finally she got up and moved back to sit next to him because apparently she couldn’t be 22 rows away from him for a 3 ½ hour flight.  I don’t get it but maybe that’s why I’m single.

Things started to go haywire when I got to Atlanta at the rental car pickup.  I had reserved a full-size vehicle and all of the ones they had available were, to be blunt, pieces of crap.  Chevy Impalas (the old ones), Nissan Altimas, and the like all with over 30,000 miles on the odometer.  I worked in the rental car industry many years ago and I can tell you that 30,000 miles on a rental car is like 100,000 miles on a normal car – that’s how badly they get treated.

So I decided to upgrade but even the premium vehicles were kinda junky.  They had a Chevy Camaro that I finally settled on only to see that it had a huge scratch on one side and insanely high mileage and they wanted $25 per day more for it.

Finally I gave up and picked a boring Toyota Camry with 26,000 miles on it.  I made it out of the parking garage when a loud “DING DING DING” started emanating from the dashboard and the “Maintenance Required” light came on.

Back around into the rental car center and as I was standing there they pulled up a shiny new Buick La Crosse and I said “that one,” agreed to the extra daily charge, and drove off in it.  Nice car – even nicer than the one Mary and I had several years ago when we first started Plucky Survivors.

I’m staying at the Artmore Hotel in Midtown, which was my second error.  Don’t get me wrong, it’s a nice and interesting place, originally built in 1924 and in business as a hotel ever since so it certainly more character than the Marriott Suites I was going to stay in.  But the staff is a bit cold and brusque at times (I feel like I’m bothering them every time I ask a question), and some of the modern conveniences you get in a modern hotel are missing.  Internet that works, for instance.

My original room, located at the very back of the property, got no signal at all, so their solution was to give me a number for technical support who wanted me to do things like reboot my computer and check my LAN settings.  It’s not my computer, it’s the cheap ass router that’s a million miles away at the front of the hotel.

When I showed them that I could get connected fine in the lobby but not in the room they said, “Well, you’re welcome to bring your computer to the lobby when you want to go online.”  I said, “Um, no.”

“Then what would you like me to do, Sir?” came the very annoyed reply.

They finally agreed to switch my room but the only other one they had available was a two-bedroom suite, which is kind of ridiculous for just me.  It’s nice with a full kitchen, a dining room, and a living room downstairs, and two bedrooms and two bathrooms upstairs.  The furnishings are well-tended and the funky art on the walls are things like a painting of Audrey Hepburn from “Breakfast at Tiffany’s” and black and white photos of Elvis, The Beatles, and Mick Jagger.

Of course the Internet barely works here – I have to perch my computer on the corner of the dining room table, keep it perfectly still and not breathe on it, and then reconnect every 10-15 minutes because it drops me like I’m a microphone at the end of a poetry slam.

But all was redeemed with dinner at a nearby bistro called South City Kitchen.  They specialize in southern classics and I thought it was a perfect way to kick off my Deep South adventured.  I started with the Pork BBQ appetizer – shredded pork on a scallion and grits hoecake (sort of like a cornbread pancake) and topped with BBQ sauce and horseradish slaw.  I love it when a dish mixes disparate flavors together and this one did so perfectly – tangy slaw, sweet sauce, and smoky meat.   Really just perfect.

For the main course I went with the buttermilk fried chicken served on a bed of mashed red potatoes and garlic collard greens.   This was upscale in a foodie kind of way but still holding on to its southern cooking roots.  Exactly the right amount of breading on the chicken, a little spicy but not too much, and juicy beyond belief.

Strolled back to the hotel enjoying the warm night air and then went out for a drink at a local pub.

All in all a successful first day.  For my Labor Day activities I will be going to a new civil rights museum, the Jimmy Carter Presidential Library, and the place where Rick, Glen, Maggie, and Darryl are being held prisoner in a train car*! 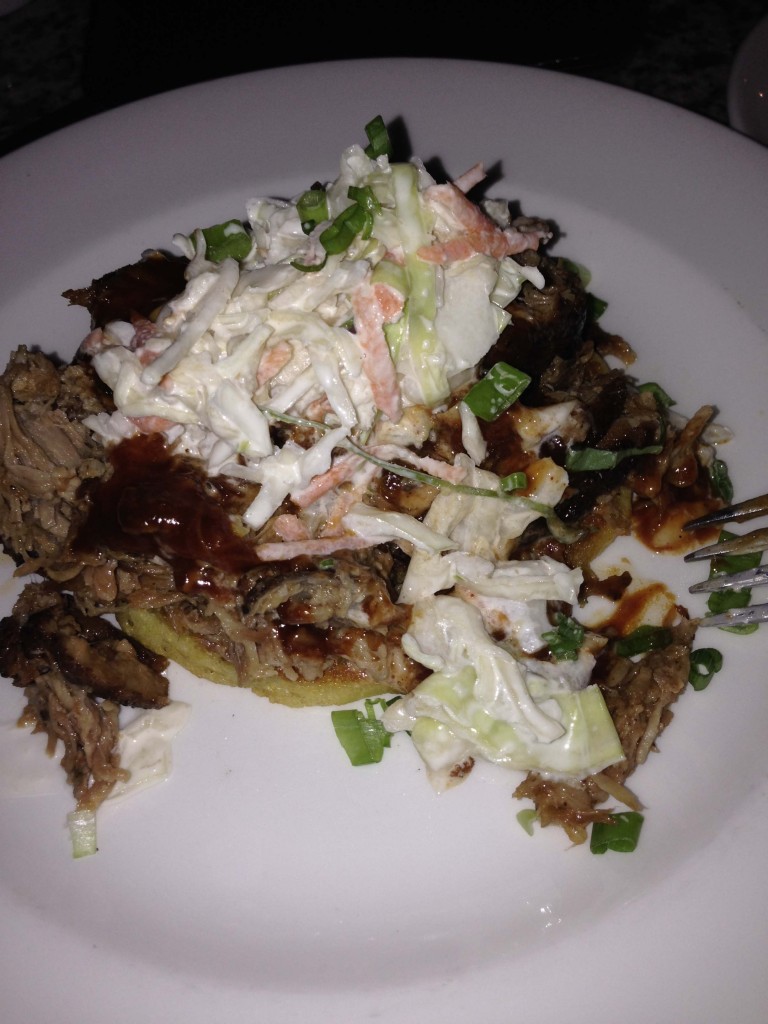 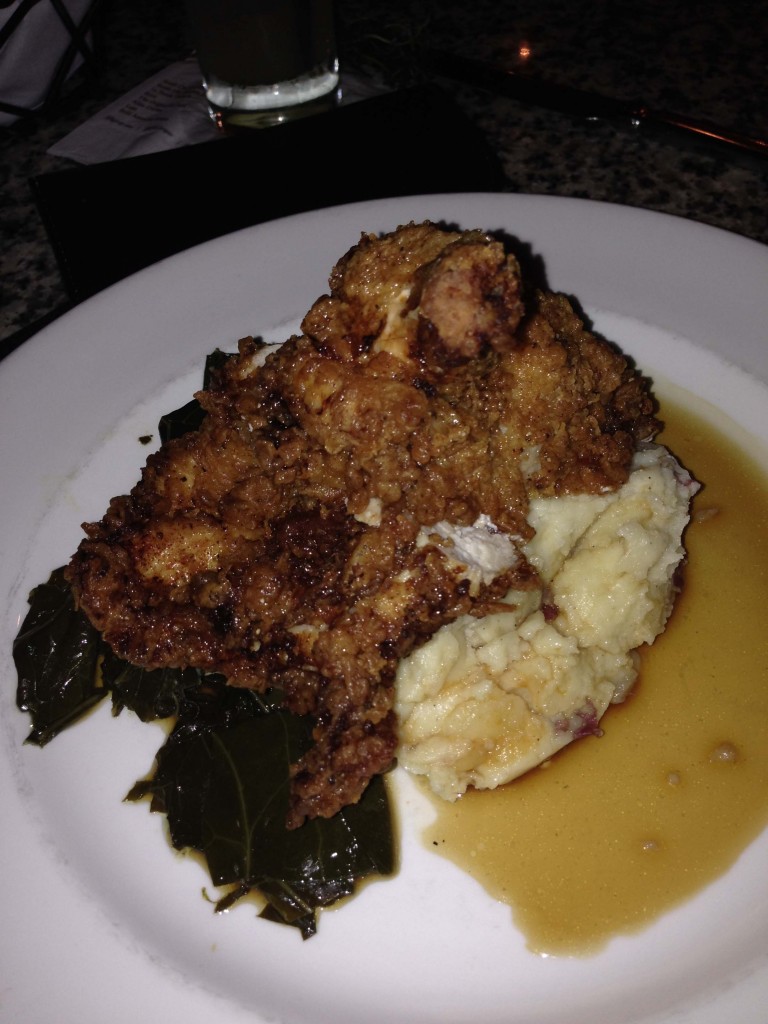 * If you don’t watch “The Walking Dead” you only have yourself to blame.