As mentioned, yesterday’s post was supposed to be about a cupcake war between two new cupcake places I went to try.  But I got distracted by food trucks and so I held the battle today.

Now, before I begin, I want to reassure you that I did not eat 4 full cupcakes today.  In my younger, fatter, pre-stomach removal days I could’ve done that with my eyes closed, but these days I can have a few bites and then I have to move on.  So it’s sort of like a wine tasting, only I didn’t spit out the cupcakes into a little metal bucket.

Now let’s meet our contenders.  In this corner we have Dreamy Creations Cupcake Cafe, a little bakery in Northridge that actually won Food Network’s “Cupcake Wars” show in 2012.  In the other corner we have A Sweet Design, a bakery in Granada Hills that was featured on TLC’s “Dragon Cakes.”

Round 1 was a chocolate off, with Sweet’s Chocolate Fudge (on the left) vs. Dreamy’s Double Chocolate (on the right): 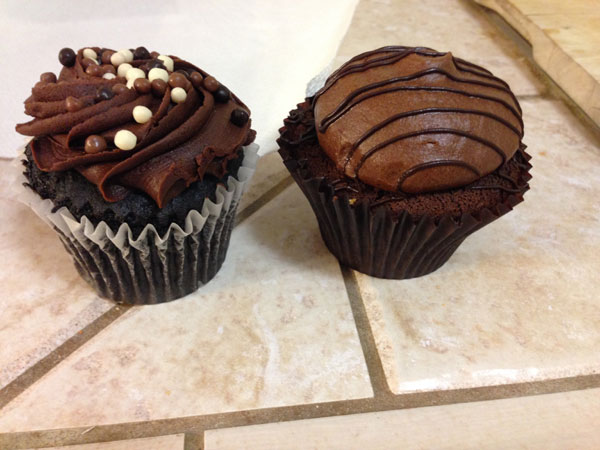 In all fairness to both cupcakes, the food truck distraction meant that these were day old, so the fact that neither made me swoon is partially my fault.  But the Sweet Design Chocolate Fudge eked out a win for me primarily because of the little white, milk, and dark chocolate pieces on top of the cake (an original touch) and some really good butter cream frosting.  The Deamy Double Chocolate, while fine, was a little bland in the frosting department and the cake was too crumbly.

Round 1: A Sweet Design by a chocolate shaving.

In Round 2 we went with specialty cupcakes.  On the left below we have A Sweet Design’s Creme de Menthe, a green mint cupcake with chocolate frosting and chocolate mint pieces.  On the right we have Dreamy Creation’s Campfire, a white cake with caramel frosting and toasted marshmallows. 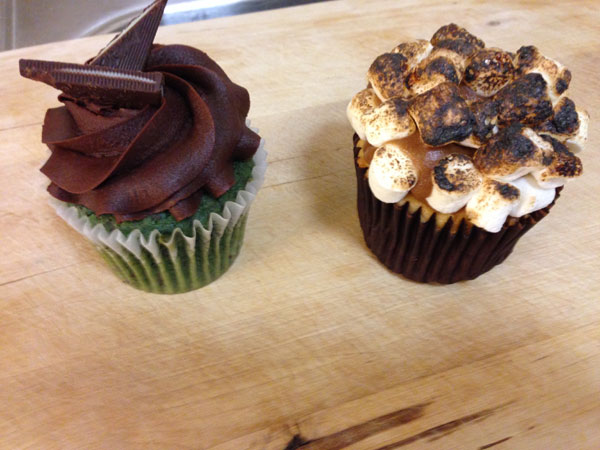 This one wasn’t even a contest.  I’m a huge chocolate mint fan but Sweet’s version of that concept was so far off the mark that I ate one bite and was done.  Dreamy’s Campfire, on the other hand, was fantastic – spongy cake, insanely sweet caramel frosting, and those perfect, blackened marshmallows.  It kicked Sweet’s cupcake ass.

Round 2: Dreamy Creations by a mile.

So, in the end we have a split decision with one victory for each place, but the overwhelming win for Dreamy in Round 2 makes me think that they are probably the overall better bet here.  I guess I’m just going to have to go back for another round!