As I was getting out of the shower this morning, my foot slipped and I smashed my fourth toe on my right foot into the metal drain stopper.  Hard.

Now, y’all are going “owwww” and I did too. Well, actually I said a variety of curse words that were practically operatic in their depth and breadth.  But in reality, it didn’t actually hurt all that much.

See, I have a condition called peripheral neuropathy, wherein the nerves in my feet and lower legs have basically stopped working.  In short, I can’t feel my feet – they are just clods of meat.  Feel free to poke me in the ankle the next time you see me – I won’t feel it.  I’ve gotten used to it and other than the occasional balance issue, the biggest trouble I have with it is that if I injure my foot in some way – stepping on something for instance and cutting myself – I don’t feel it.  I’ve actually gotten a couple of infections this way.

So when I hit my toe and I felt pain – even a relatively small amount – I knew that I had done something bad.  Of course then when it got swollen and turned kinda reddish/black I thought, okay… I have broken my toe.

It was 8 in the morning and I knew that even if I could get in to see my regular doctor, he’d just send me off for an x-ray, so I decided to go to an urgent care facility instead.

I’ve done this before – oddly, for a toe thing I’m just remembering, when I bashed the nail on my big toe and it got infected.  But the one I have been to, which is right next to my doctor’s office and the hospital I have spent way too much time in, didn’t open until 11am.

So I went a-Yelping to find another one in the area.  It directed me to a Rapid Care facility in Burbank.

I walked in and was immediately horrified. The place was in terrible shape – cracked linoleum, a broken window.  It smelled like cat urine and despair.  I made it to the check in counter and then said, “You know what?  Never mind.”

A little more Yelping too me to another urgent care facility up near the Burbank airport.  This one wasn’t horrifying but it was really busy, filled with lots and lots of people coughing and/or limping.

When I came in I said, “I may have broken my toe” but I left the specifics out figuring the receptionist didn’t need to know about my shower habits.  Everyone else, thought, felt like going into graphic detail about why they were there.

One guy fell off a ladder   He was concerned he had broken his foot but then asked if he had time to walk over to Fry’s Electronics across the street before he got x-rays.  Another one had been in a car accident and had gotten glass in his eye that he picked out himself with a pair of tweezers but thought a doctor should look at it anyway.  (Ya think?!)

This is the part where I reaffirmed that there was very little in the way of urgency at urgent care.  I got there at about 8:30 and I didn’t get called in to be seen until about 10.  Then I sat in the exam room for another 30 minutes before the x-ray technician came to collect me.

She smacked my foot with the x-ray panel as I was getting on the table.  If I didn’t have peripheral neuropathy, I’m guessing that would’ve hurt.

Anyway, the long and the short of it is that I have a small fracture in my toe.  They wanted to tape it up and then put on a “shoe cast” but I said no.  Can you say overkill?  Tape that sucker up and get me outta here.

So yeah, my Differently for the day is that I broke my toe.   Fun, huh? 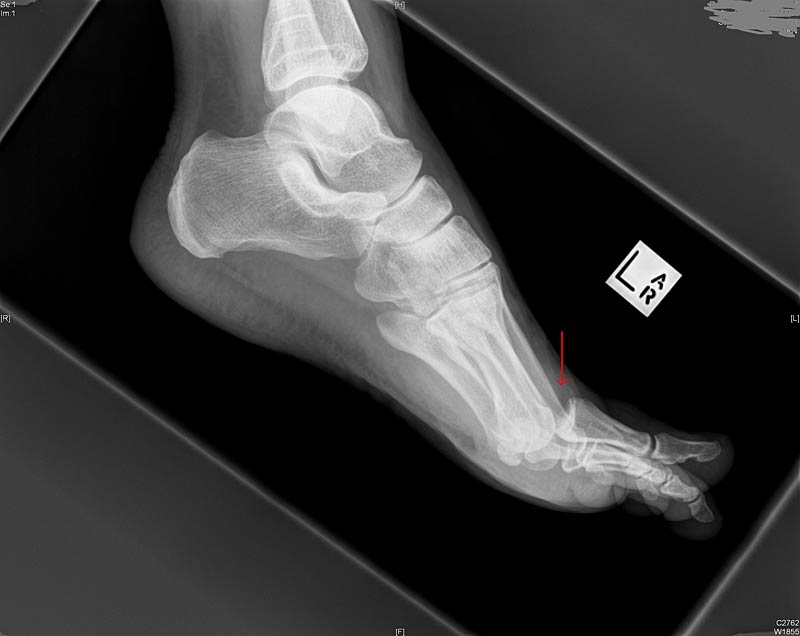 Not my foot. But I’m guessing it looked something like this in the actual x-ray.