There’s a guy who lives in my building who is, officially, the nicest guy on the face of the earth. I don’t know him, really, other than passing him in the hall or the parking garage on occasion, or maybe running into him in the laundry room, but he always greets me, and everyone else, with a smile and a “Hey, how are you?” And it’s not an obligatory kind of “Hey, how are you?” It’s a genuine one. He actually wants to know how you are, which is weird to a misanthrope like me, but I have come to appreciate him and his sunny disposition.

The other night as I was getting home from work, he was arriving at the same time and we wound up at the mailboxes together. He gave a smile and a “Hey, how are you?” but I could tell something was off. I said I was fine and asked him how he was and he said he was fine and that was probably going to be the end of it. But then he stopped and said, “Actually, no I’m not fine. I just found out my dad has cancer.”

And he meant just found out – like 20 minutes earlier. I was the first person he encountered after getting the phone call as he was driving home.

For a moment I thought it was weird that he would tell me this incredibly personal thing but then I realized why he did it. He lived here in the building when I was going through my cancer drama and got the lowdown on what I was going through first from my parents, who were staying here for awhile after the big surgery, and later from me as I was pretty much homebound for the better part of a month.

He was telling me about his dad because I had cancer. And more importantly, probably, I had lived.

That kicked me into gear. First I asked what kind of cancer and asked if he had good doctors. His dad is being treated at the same hospital where I had my surgery so I offered referrals for my oncologist, Dr. Wile E. Coyote, and my surgeons, Dr. Frenchy and Dr. James Earl Jones. The latter two may not be the warmest human beings on the face of the earth but I’d recommend them as cutters any day of the week.

Then I told him how important it was for his father to be an advocate for his own health. Cancer is scary, I said, and it sucks, and sometimes doctors forget how scary it is and how much it sucks and you can feel left behind. I told him to make sure his father is asking questions and asking them again and again if he feels like he isn’t getting the answers he needs. And most importantly, no matter how much they may act like it at times, the doctors are not doing him a favor – he is paying them for their services and therefore they work for him.

Next I told him that he had to remember that cancer doesn’t happen only to the person who has it, it happens to all the people around him or her. It is imperative, I told him, to make sure that you are doing what you need to do to maintain your balance physically, mentally, emotionally, and spiritually. If you let yourself fall apart, you won’t be any good to the person who needs you most.

Then I gave him what I was sure he really needed.

“Look,” I said, “It’s going to suck. A lot. I know this from experience. But I shouldn’t be here and I am. They are doing amazing things with cancer these days and if I can make it through it, I’m sure your dad can too.”

He thanked me profusely and that was the end of the encounter but it stuck with me. For the last couple of days I kept going back to it, circling the memory like a dog circles as spot before he lays down there. Something about the experience was tickling a portion of my brain as if it were a memory, but I couldn’t quite figure out why.

So how does all this qualify for today’s Differently, especially since it happened a couple of days ago? Well, today I ran into my neighbor again and he thanked me again for the advice. He said it made a difference.

And for some reason that’s when it clicked for me.

My best friend Mary dealt with breast cancer on and off for the better part of a dozen years. During that time, she became something of a cancer expert and was always eager to give advice and encouragement to people she met who were encountering the disease in one way or another. Sometimes it went beyond advice and encouragement – sometimes she would tell total strangers what to do and darned if she wasn’t usually right. I watched her do this a couple of times and it was amazing how she would just sort of downshift as if she was starting up a hill and then pick up speed until she got the person to the top.

The way I was talking to my neighbor about cancer was exactly the way Mary used to talk to people about it. Realizing that stopped me in my tracks and brought tears to my eyes. I felt as though a torch had been passed.

I have talked about having cancer before; I sometimes feel as if I talk about it too much. But this was the first time I had talked about it with the context of trying to help someone who had run headlong into it. I made a difference. That may have happened before in my life, but today – my Differently for today – is that I knew it. 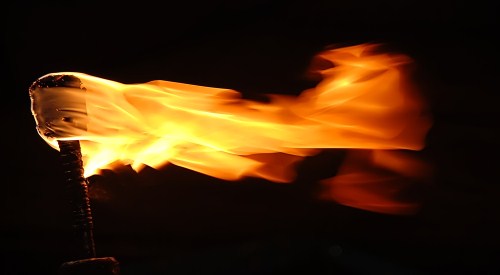