I have lived in the same general area of Los Angeles for most of the nearly 30 years it has been since I escaped from Iowa (which I did as soon as I was sure my parents couldn’t send a sheriff to bring me back). It’s North Hollywood unless you want to call it Toluca Lake or West Toluca Lake or Studio City Adjacent or the NoHo Arts District, which people do for reasons that mostly have to do with property values and status. Regardless of the name, I have resided in the same neighborhood forever (except for a couple of short stints of living in other parts of town not worth mentioning) and lived in the same apartment building for nearly 19 years (!!#**#!@).

One street north of me is a street called Camarillo and if you take it east you cross into Burbank (which is usually only called Burbank) and the street changes names to become Verdugo and you see this: 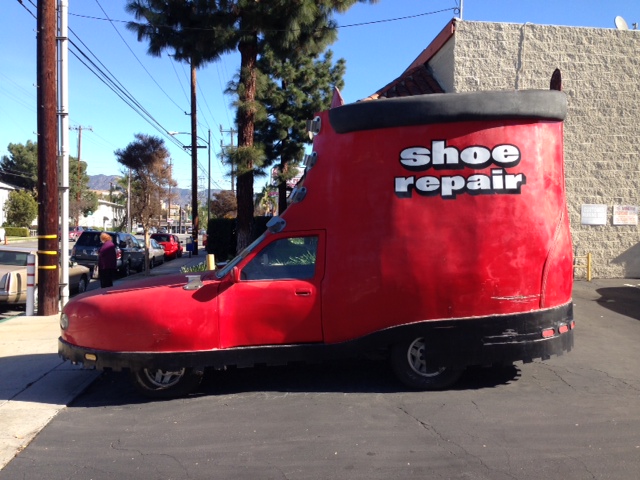 The Shoe Car has been in front of or next to Victor’s Shoe Repair (3810 W. Verdugo, Burbank for the record) for as long as I have lived in this neighborhood. I’d say I have probably driven by it thousands of times and I have always wondered what kind of car or truck gave up its life to become a Shoe Car. I’ve always wondered but never stopped to ask. Today, I did.

The Shoe Car was originally a Toyota 4-Runner. It has been an iconic bit of the Los Angeles scenery for decades and believe it or not it still runs!

It reminds me of the kinds of things Mary and I used to see on our Plucky Survivors adventures – the muffler men and the giant chicken statues and the like. There is a lot of whimsical and wacky here in Los Angeles but I have either been too busy to pay attention or simply couldn’t be bothered to seek it out. I think I have missed a lot because of that, so herein is the lesson for Day 2 of The Year of Living Differently: stop and smell the Shoe Cars.