Today, I corrected that. If you need to do the same, here’s the video:

After watching it, I flashed back on my experiences intersecting with the legacy of Dr. King, which came during the Plucky Survivors See America road trips I took with my best friend Mary. I went back to re-read those parts and came away proud of what we had written and wanted to share it with you.

First, from 2006 and our visit to the National Civil Rights Museum, built on the site were Martin Luther King Jr. was assassinated:

This stunning facility is made up of several unified buildings – a new structure adjoins the shell of the Lorraine Motel where Martin Luther King Jr. was shot and across the street is the boarding house from which the fatal bullet came. 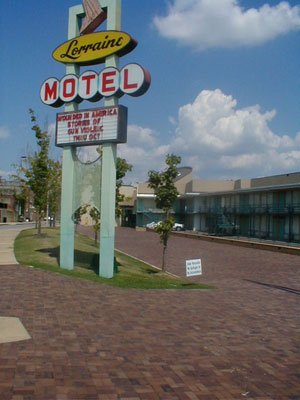 You go through exhibits made up of state-of-the-art graphics, photographs, multimedia and interactive displays, and artifacts which explain the whole history of the Civil Rights movement, starting well before the Civil War and working step by step through the underground railroad, school integration, Jim Crow laws, soda fountain sit-ins, bus boycotts, marches on Washington, and so much more.

It culminates in a hallway positioned between two recreated motel rooms; one a typical one, all made up for the day, the other in a rumpled state, just as it was when its occupant decided to step outside on the balcony. The railing outside has borne a wreath since hours after 6pm, April 4, 1968. This is holy ground, reverent and inspiring silent contemplation as you listen to Mahalia Jackson singing a lament in the background. We dare you to not be moved by this spot. 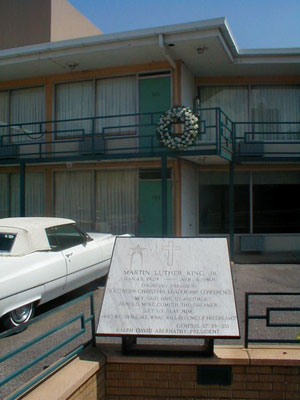 The balcony of the Lorraine Motel where MLK Jr. was shot.

From there you cross the street and enter a tunnel that takes you upstairs to a recreation of the tawdry room occupied by James Earl Ray. From the seedy bathroom you can see how easy it was to take aim at that balcony across the street.

This section also contains a broader perspective on the meaning and effects of assassination from Yitzhak Rabin to Harvey Milk (shown as stars on the constellation as it would’ve appeared in Memphis on the night of April 4, 1968) plus an interesting look at the lingering questions of whether or not King’s assassin acted alone.

The man overseeing the door encouraged us not to linger upstairs but quickly move along to the exhibits on the first floor, which emphasize “our accomplishments.”

He said, “You know how Katie Couric started last night? She couldn’t have done that a few years ago. That’s part of the accomplishments.” He’s overlooking Barbara and Connie, of course, but we got his point, and more importantly, his optimism and attitude; why focus on such an ugly and tragic moment? Why not look forward?

The exhibits in toto were so profound we couldn’t really say anything for a long time after, and we aren’t any better at finding the right words now. The one thing that struck us was how massive and seemingly impossible the task was and how each victory was just a small chip away at an edifice that surely would never fall. And yet it did.

That’s where the man at the door was right; it never truly ends. We may have won the battle to desegregate schools but today are higher rates of unemployment for African-Americans; Jim Crow law were declared illegal (and immoral) but there are still women who make less average wages than men and gay people can still be fired from their jobs in 37 states because of their sexuality. We truly honor the incredible work those people did by continuing their struggle in all areas of injustice, and never giving up, because it’s also never truly hopeless.

Then from 2009 when we visited the MLK Historic Site in Atlanta:

From the cemetery we went to the Martin Luther King National Historic Site. This is a cluster of buildings erected next to the new Ebeneezer Baptist church, across the street from the historic original, and down the street from the nice Victorian where Dr. King was born in 1929. 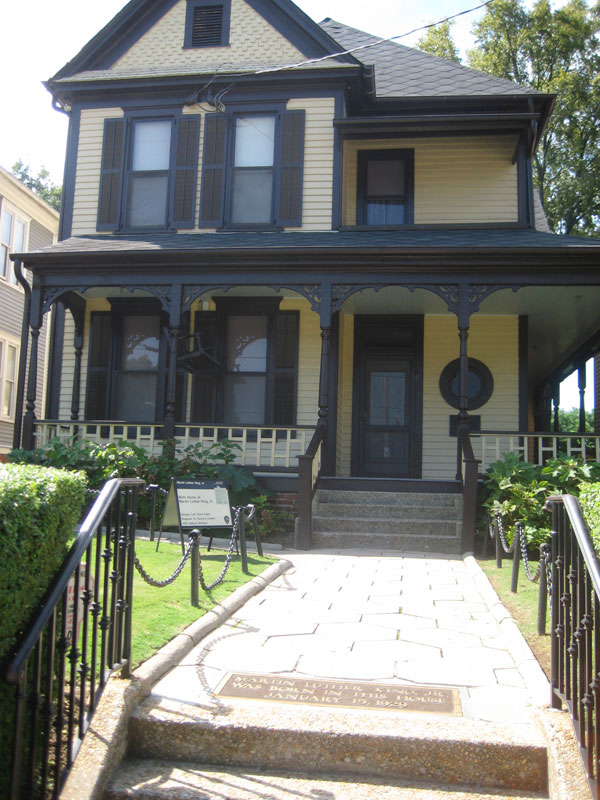 The first building holds excellent exhibitions on MLK and his historic context. There was a room containing the mule cart that carried Dr. King’s casket during his funeral procession, plus all the dry official documents that were issued upon his death “by gunshot wound to thorax.” Such a simple stark phrase to sum up not just the death of a man but what seemed at the time to be the death of a dream, of justice itself. The exhibit also had letters sent by children to Dr. King’s children after his death. One in particular was a drawing of three kids, all sad faced and crying, and underneath it read, in tipply child’s handwriting, “Sorry about your daddy.”

Across the street is another visitor’s center which contains Dr. King’s Nobel Peace Prize, plus other mementos and artifacts of his life, including his minister robes, his toiletries, a case of cufflinks, and a very, very well thumbed Bible. There are also copies of books he read on Gandhi, and a room devoted to that other messenger of peaceful protest and justice. 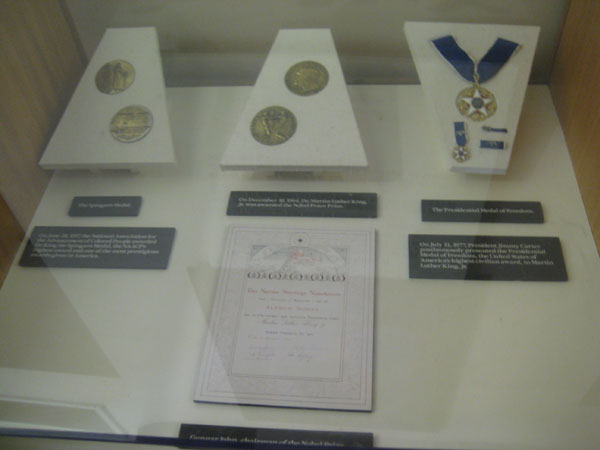 Out front is Dr. King’s tomb, a shining white sarcophagus set in a placid lake of blue water. 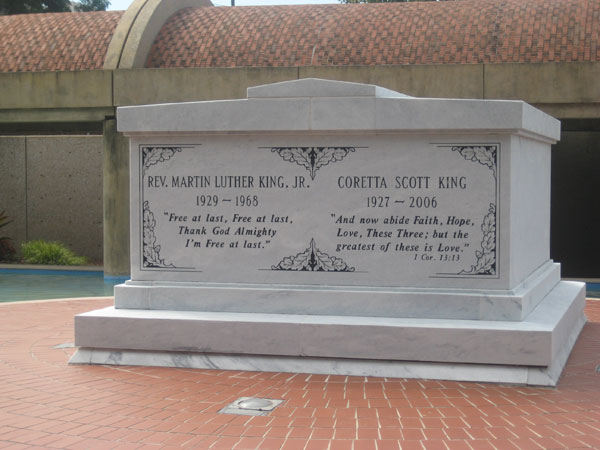 There is nothing we can say about that.

Except; that tomb, and the toppled statue pictured here may be the iconic starting images for what we think is emerging as the theme of this trip; endurance and resilience. Anything from minor adversity to catastrophe can topple and break plans and lives, and it seems impossible to piece it together again afterward. And yet; Sherman marched through Atlanta and left it in ashes and here it is, alive. Dr. King is tragically, senselessly murdered, and here we are, this same night, about to see a black man accept the nomination as the Democratic candidate for President of the United States. It’s forty years later, and that’s much too long, but it happened, what surely on April 4, 1968 seemed utterly hopeless.

We didn’t know that today was the 45th anniversary of the I Have a Dream speech, but it’s appropriate; we went through exhibits on what brave people did in the face of crushing odds, and tonight a part of their dream is being realized. We honor their legacy when we endure despite our own stumbling blocks, no matter how destructive they are. We don’t want to insert ourselves into history, but being here today on this day, Obama, 45th anniversary, our own journeys, felt serendipitous, and moved us profoundly.

And remember the compassion of the letters from the children; if one generation fails, perhaps the next one can succeed.

Finally this, from 2006 and our stop at the Lowndes County Interpretive Center, located along the Selma to Montgomery march route:

And then there was this quote in that tremendous video from Martin Luther King Jr. himself: “If you can’t fly, run. If you can’t run, walk. If you can’t walk, crawl. But by all means, keep moving.” That’s the lesson we are trying to take from all of this; sometimes, it’s all so huge, what needs to be done, but you do what you can… just keep moving.