When I was at the Great Wall of LA a couple of weeks ago, there were many panels on the mural that depicted significant incidents in Los Angeles history that I knew nothing about. I made a list of them and decided that learning about them would make good entries on my Differently list. Tonight, I learned about the Zoot Suit Riots. 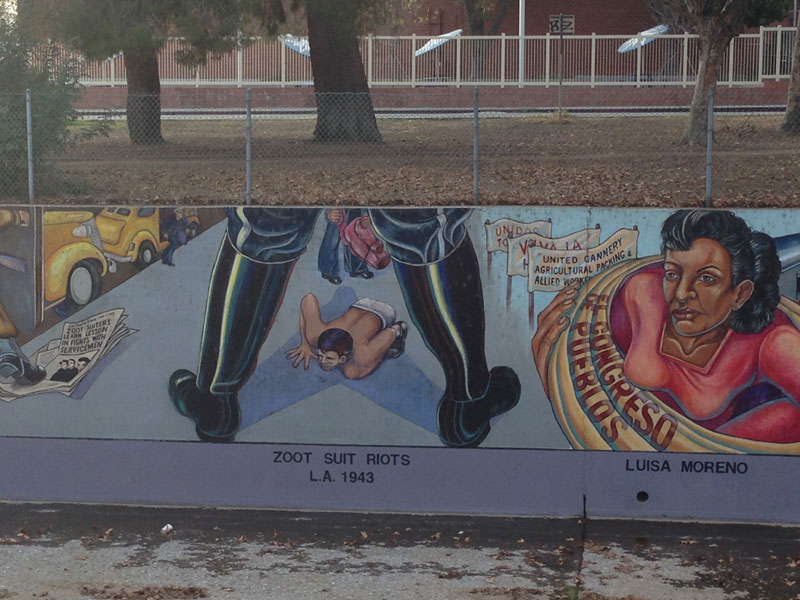 No, not the song by Cherry Poppin’ Daddies, although it was inspired by actual events.

The riots happened in early June of 1943; a culmination of years’ worth of racial tensions and a patriotic fervor inspired by World War II. A wave of Mexican immigrants had flooded into Los Angeles in the early 1900s, driven out of their country by the Mexican Revolution. By the late 1930s, Mexican-American youth had adopted some of the affectations of the jazz subculture to help define themselves, taking on the lingo and the dress made popular by the musical genre including the zoot suit. Unlike most of the clothing at the time, zoot suits were flashy – broad shoulders, narrow waists, baggy pants, bold colors and patterns. Young boys, men, and even some women wore the suits as a symbol of status and felt that they commanded respect. They gave many Mexican youth their first taste of what we call today “swag.”

Because of the level of poverty and unemployment in Los Angeles through the 1930s, Mexican youth in their zoot suits were often associated with crime and gangs by both the white citizens of the city and by older Mexican immigrants. The association wasn’t completely without merit – the suits were popular among Pachuco gangs of the era. Wearing the suits may have generated respect amongst their own subculture, but amongst the larger citizenry they were viewed as suspect and anyone who wore one was probably going to cause trouble.

When America entered World War II, many items were rationed including wool used for making suits. Strict guidelines were enacted that dictated how much material could be used and the end result was that zoot suits were effectively banned. This didn’t stop them from being made, of course, and the Mexican youth culture embraced their “bad boy” aesthetic even more firmly.

Many white American servicemen, who often took leave in Los Angeles, were offended by the suits, casting anyone who wore them as unpatriotic.

In 1942, a sensational Los Angeles case dubbed the Sleepy Lagoon Murder gained nationwide attention when a young Mexican man was found beaten and later died. Believing it to be the result of Pachuco gang wars, the police rounded up hundreds of young Latinos, many of whom wore zoot suits, and eventually charged 17 of them with murder – 12 were convicted (they were overturned in 1944). This cemented the concept of the zoot suits as being worn only by thugs and hoodlums.

On May 30, 1943, a group of servicemen on leave in on Main Street in Downtown Los Angeles got into an altercation with a group of zoot suit wearing Mexican youth. One of the servicemen wound up unconscious with a broken jaw.

Seeking retribution, about a dozen sailors took to Main Street on the night of June 3, 1943 and began harassing, taunting, and in some cases beating young Mexican men, especially those wearing zoot suits. The police responded and wound up arresting the Mexican youths instead of the sailors.

The next night an estimated 200 sailors took taxis and buses to Main Street and began a coordinated effort to “clean up” the neighborhood. The first two victims of the riots were a pair of boys, 12 and 13 years old, who were beaten and stripped of their suits, which were burned.

Over the next few days, thousands of servicemen joined in the violence, marching through heavily Mexican parts of Los Angeles. Unable to find enough zoot suiters on the streets, they began smashing their way into businesses including bars, restaurants, and movie theaters where people were dragged out of their seats, stripped, and beaten while the sailors urinated on their zoot suits. The police made hundreds of arrests… of Mexican youth. No servicemen were arrested.

During all of this the public openly encouraged what was going on. The Los Angeles Times ran editorials and stories blaming Mexican gangs for the riots and the Los Angeles city council passed an ordinance banning zoot suits (although it was never officially made a law).

The violence spread to other cities and began to ensnare other minorities. Similar racially driven riots took place in the predominantly black neighborhood of Watts in Los Angeles.

After four nights of rioting, the navy issued an order banning servicemen from taking leave in Los Angeles, which stopped most of the violence. Although sporadic incidents broke out in the city and around the country, it had mostly come to an end by mid-June.