I work out twice a week with a trainer, Sam Page of Sam Page Fitness, who kicks my ass on a regular basis.  It’s the only way I can find the wherewithal to actually exercise; my body’s default setting is sloth.

I had been working out pretty hard before the whole cancer hooha and was in what was probably the best shape of my life.  It’s all relative – I wasn’t a Greek god by any stretch of the imagination – but for me it was not too shabby.

When I got my cancer diagnosis the doctors told me to gain weight because they knew I’d be losing a lot of it after the surgery.  I used that as an excuse to eat everything in sight and ballooned from a fairly muscular 210 pounds (I’m 6’3″ for the record) up to 236 pounds the night before the first surgery in August of 2012.  When I came out of the hospital 2 weeks later I weighed 205 pounds – yes, I had lost 30 pounds in 14 days.  That was September.  By October it was 40 pounds.  In November it was 50 pounds.  By December I stepped on the scale and saw the number 173 come up, a weight I had not weighed since junior high (I was really fat when I was a kid).  After the third surgery in February I went all the way down to 168 pounds, just two shy of a 70 pound weight loss and nearly 25% of my pre-surgery body weight.

Since then I have been struggling to put weight back on, which is so f-ing weird considering the fact that I spent most of my life trying to lose weight.  A year later I am at a respectable 185-ish pounds and the last couple of months I’ve been trying to add some muscle into the mix.  It’s hard, partly because my body is so different now and partly because I’m 47 years old and my default setting is sloth.

Today I asked him to direct me in an exercise I had never done before and he chose the Cuban Press.

Naturally I said, “Isn’t that a sandwich?”

No, unfortunately it’s not.  It’s hard to describe this exercise but basically you lift dumbbells up like are doing an upright row until your elbows are at shoulder height with the weights hanging down.  Then you rotate your arms at elbow and bring the weights up until your arms are in “field goal” position.  Then you raise your arms above your head and then reverse it back down again.

For the record: ouch.  Even thought the weights were light, I barely got through the first set and by the third set, Sam was effectively moving my arms like I was a marionette.  I’m so going to regret today’s Differently tomorrow. 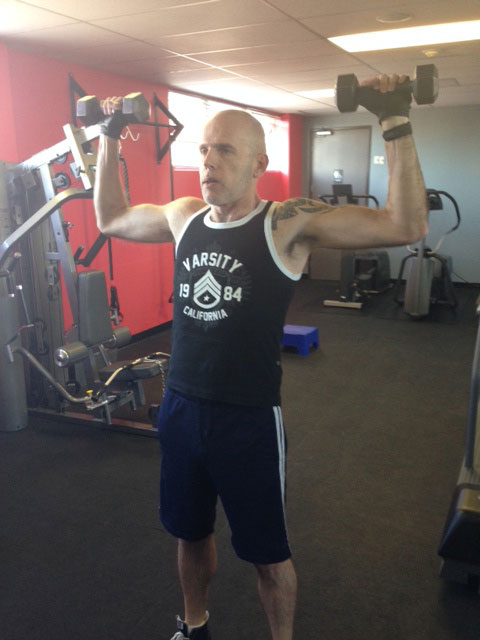 Sam took about 20 pictures – this is the one I look the least foolish in.