My commute to work is roughly 14.6 miles, including about a mile of surface streets from my home to get to the 101 freeway and another half a mile from the freeway to the office.  On a normal day, from garage to garage, it takes me about 30 minutes, give or take.

In case you’re math deficient like me, that’s an average speed of 30 miles per hour, or less than half the legal limit on the freeway.

Some days it’ll take 15 or 20 minutes for no apparent reason and it can be more for a lot of reasons (accidents, broken down cars, weather of any kind), or no reason at all it seems.

Today, about two miles past the exit that I take near my office, apparently they were doing some sort of road work and had one lane blocked.  Let me reiterate that… one lane.  1.  Uno.  Singular.

During my epic slog to Woodland Hills, I saw some of the worst driving I have ever seen in my life.  People went quite, quite mad – driving on the shoulder, driving into opposing traffic, cutting people off.  I witnessed an accident when traffic stopped so a car could turn left into a driveway only some jackass decided to choose that moment to drive in the non-existent lane where cars are normally parked and t-boned the turning car.

I am a pretty good driver.  I will admit that I am an aggressive driver but I think you kinda have to be here in Los Angeles or you will never get anywhere.  I’ve had a few accidents in my life and a couple of speeding tickets but generally speaking I think I’m better than average and certainly better than most of the people I was sharing the road with today.  I’m certain most of them would fail a driving test if they had to take one.

So of course that made me wonder if I could pass one.  I mean, I must have passed one at some point because I have a driver’s license but I haven’t had to take one in decades so I figured this would be a good Differently for the day.

I went on to the California DMV website and found five practice tests, each with 10 multiple choice questions.  I got 46 out of the 50 correct, so suck it most LA drivers, I’m better than you are!

These are the ones I got wrong:

You are approaching a railroad crossing with no warning devices and are unable to see 400 feet down the tracks in one direction. The speed limit is:
15 mph
20 mph
25 mph

So as long as I don’t have to sell my car, cross a railroad, turn left, or travel on a one-way street, I’m golden! 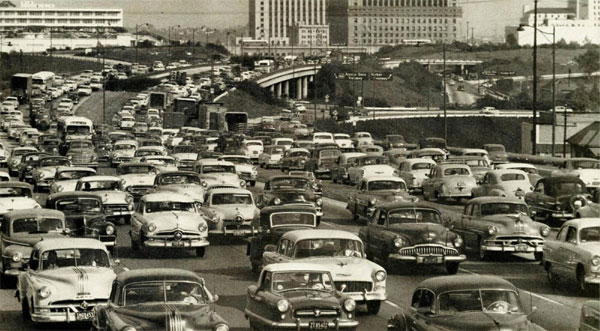 It hasn’t gotten any better since this picture was taken.