I have three great Differentlies today – one involving a fantastic new restaurant, another involving a famous person, and the third involving what I did to my face.  Hmmm, which to start with….

If you live in Los Angeles you must drop whatever you are doing and run, do not walk, to Warren’s Blackboard, a new “pop-up” restaurant concept at the Beverly Garland Hotel on Vineland in North Hollywood.  I know…. a North Hollywood hotel restaurant… how good could it be?  Unbelievably good.

It’s headed by Warren Schwartz, who has a resume that includes sous chef at Patina under Joachim Spichal and executive chef at Saddle Peak Lodge, Westside Tavern, and the Viceroy Hotel.  Here, he’s playing; experimenting with different dishes as a “workshop” for the full restaurant that he will be opening in the space in May.  All the ingredients are locally sourced and sustainable, so you get crazy fresh.

I had the I went with the ever lovely Maureen B. and we both agree that it is a truly special place.  We started with the White Boy Fried Rice, which was recommended to us by Eric Stonestreet of “Modern Family.”

I’ll come back to that.

Anyway, it’s basically fried rice with broccoli and Spam – genius and stupid good.  Maureen had the salmon with baby sweet potatoes and tangerine and I had the pork chop, with apple slaw and creamy polenta.  I have whined often and vociferously about my food issues but this was so good I ate more of this than I have of just about anything since they chopped out a big chunk of my stomach.

Backing up a bit, we arrived at the valet and I glanced up at the couple waiting for their car and noticed that the guy was Eric Stonestreet, the Emmy-Award winning actor who plays Cam on “Modern Family.”  I rarely bother famous people when I see them – to be honest, I rarely recognize them – and in this instance didn’t intend to but then the woman with him called out, “Rick?!”  It was the lovely and talented Erin, who I used to work with at Disney.  She apparently had just seen this very blog on her Facebook feed recently and Eric knows someone who knows Maureen and so it’s this weird tiny little world and I met Eric Stonestreet and he told us to try the White Boy Fried Rice and we did and it was really good.

Backing up even more we get to the face pleasing, which was my originally intended Differently for the day.

This came about because I’m getting old.  For the most part I’m accepting of that – the loss of hair on my head, the gain of hair in my ears, and the fact that most of it is gray or snow white.  I’m okay with the wrinkles, too – I’ve decided they make me look distinguished.

What I’m not okay with is the puffy, saggy, grossness that is under my eyes.  It’s sort of a loose skin kind of thing that, to my extremely judgmental eyes, makes me look about 10 years older than I actually am.  Some of it comes from age, some of it is hereditary (my mother has a similar thing going on, but she’s almost 80), and some of it has to do with all that weight I lost during the cancer hooha.

I’m actually looking into Botox or similar but for now I decided to make myself at least feel better by doing something I had never done… getting a facial.  I know, I know… how is it possible that I have never had a facial?  Well, it’s true.  Until today.

My delightful friend Fred (he makes me say that) manages Monique’s Salon and Spa in Tarzana and so I went there to get my face pleased.

My facilist (tm Rick Garman) Lori did a great job (she was very patient with me and my “what are you doing to my face?” type of questions) and and the facility is lovely (if I had hair, this is where I’d get it done).  So my overall reaction to the facial has nothing to do with them it has to do with the fact that I’m an OCD, crazy person who can’t ever relax and doesn’t have the patience god gave a rhinoceros.

I don’t like people touching my face, which probably should’ve been something I considered before I went to get a facial.  It seemed like a good idea at the moment.

And I know I’m supposed to relax and enjoy it but I’m way too much of a control freak and have a brain that resists shutting off at all costs, so I pretty much laid there and stressed out the entire time thinking about all the other stuff I needed to get done.  And I did it while listening to that f-ing spa music – which again, if you’re going to spa you should expect – but it makes me want to hurt someone.

And of course I still have ugly bags under my eyes.  I think it is completely reasonable that I expected to walk out of their looking 20 years younger, don’t you?  Oh, just humor me. 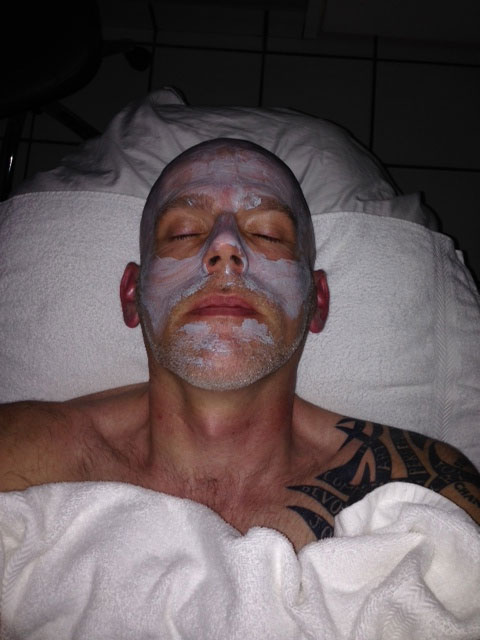 No, this is not my autopsy photo. I’m getting a facial, damn it!