Today, February 4, is National Homemade Soup Day.  I don’t know who decides such things but they did and so it was declared and so it shall be.

My idea of making soup is opening a can, pouring into a bowl, and then microwaving that sucker until it’s hot.  But this is The Year of Living Differently and so I, now, have officially made soup.  And not only did I make soup, I made my own soup.

I went online and looked up a couple of soup recipes but none of them were moving me.  I wanted something easy and definitely in the comfort food category so I just sort of made it up as I went along.

I stated with ground beef, which I sauteed in garlic, butter, and onions (which is how I start pretty much everything I cook).  I added some spices and seasonings – salt, black pepper, basil leaves, oregano, more garlic, a tiny bit of paprika, and just a hint of red pepper.  You will note that all of these were included because I had them in my cabinet.

Next I added more onions, carrots, and potatoes into the ground beef and cooked that all up, making sure the beef was brown and the potatoes and carrots were relatively tender.  It looked like this: 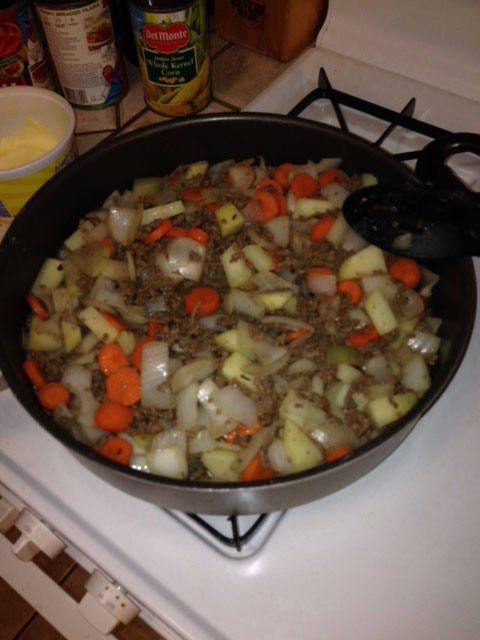 In a bigger pot, I put stewed tomatoes (canned, sorry) and a can of corn and then I added the beef mixture (after draining the fat).  Then I added water, tomato juice, and more seasonings.  Brought that sucker to a boil. covered it, and then let it simmer for about 30 minutes.

This is not ground breaking soup and will not win me any awards, but it’s pretty darned good if I do say so myself. 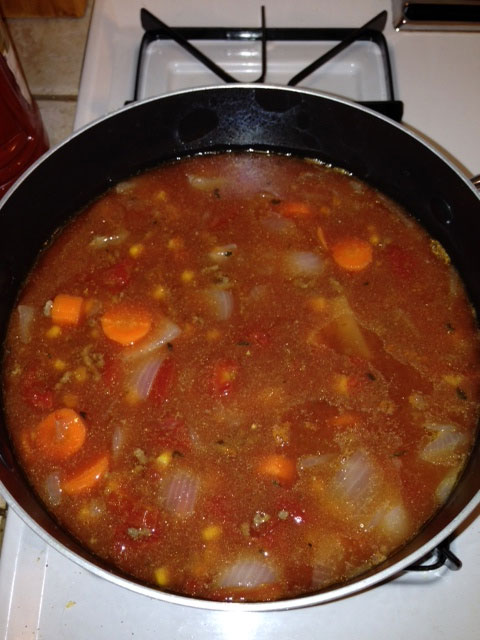 Of course now I have enough soup to feed a small army so if you’re hungry, ring me up.