TYOLD Day 36: Why Are the Birds So Angry?

My iPhone has always been more of an appliance than an amusement.  I use it mostly to check email, read the news, find out what the weather is going to be like so I know what to wear, deposit checks, take pictures, and the like.  I have about 100 apps installed and I think I use 10 of them with any regularity.

Oh, and I frequently use it to avoid talking to people.  Looking down at your phone is today’s equivalent of a Do Not Disturb sign.

As far as games go, I have several installed but only a couple that I play occasionally, mainly when I’m in doctor’s waiting rooms.  One is called Jumbline and its a Text Twist style thing where you get 6 letters and have to make as many words as you can using those letters.  The other is video poker and I have to be annoyed by failing at Jumbline to play it.

I’m not sure why but I think it has something to do with my deep love affair with both television and the Internet.  I could be perfectly happy – and often have been – doing nothing but watching TV and surfing the web all day.  And yes, I know you can do those things on your phone now, but it doesn’t feel right to me.   Experiences on a mobile device feel “small” and I’m not just talking about the size of the screen.  It’s like they are unimportant, transitory, and disposable.

I flirt with my phone but I don’t love it and that’s probably why I have missed the boat on all of the big apps, including the biggest: Angry Birds.

Did you know this is the biggest selling app of all time?  More than 7 million downloads and counting of the original, with spin-offs, merchandise, cartoons, and more on the way.

I had never played it… until tonight.

I’ve heard it can become a bit of an obsession.  I don’t know.  I thought it was interesting; I have played games like it online before.  But I mainly kept wondering why the birds were so angry and why they want to kill the weird green pigs.  I think they’re pigs.  Whatever.  It perplexes me.

Of course several weeks from now if I’m not returning phone calls or email and you find me sitting in a dark room trying to get level 52 done in one shot without using up my extra birds and therefore achieving a new high score… feel free to slap me. 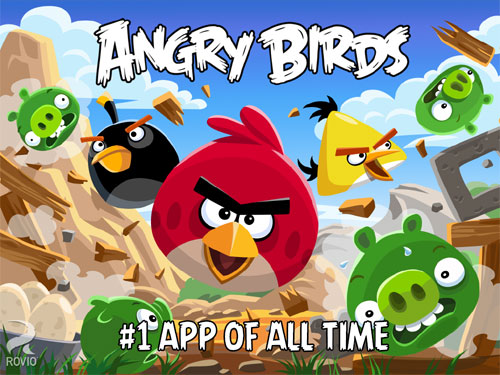