TYOLD Day 38: Alanis, Kristen, and Me

Arclight Cinemas is a local movie theater chain here in Los Angeles that does some fun special screenings and events including a series from the Modern School of Film where they will show a movie and have a famous person talk about it afterward.  I had never been to one but I’ve heard they can be cool.  Sometimes it’s someone who had something to do with the movie – for instance in a couple of weeks they are showing “Ed Wood” and will be having Martin Landau there to discuss it.  Other times they ask someone to simply pick a film that they really like and then talk about it afterward.

Tonight featured Alanis Morissette who picked “Bridesmaids,” which instantly made me love her even more than I already did.

It was screened in the Cinerama Dome, an historic Hollywood theater dating back to 1963 (the first film shown was one of my all time favorites, “It’s a Mad, Mad, Mad, Mad World”).  There’s something really cool about seeing a movie there – much more atmosphere than the cookie-cutter boxes you usually sit in.

So first we (me and my friend Sam) watch “Bridesmaids” (which still makes me laugh out loud) and then we get to see the world premiere – literally the first time any audience has seen it – of Alanis Morissette’s new music video “Big Sur” (which she directed).  It’s a lovely, very “Alanis” song and the video has got a nice California sunshine, surf, and sand vibe – almost hippy-ish in a way.

Then Alanis comes out and she talks about movies and art and creativity and humanity and God and shame and feminism and within a few minutes you get the stunning realization that she is, officially, the smartest person in the entire world.  Not only does she have a command of the English language that is unlike normal human beings, but the things she is expressing with her verbal intricacies are often so intelligent and so profound that I found myself struggling to process it all.  She’s just that quick and sharp – it’s incredible.

Then, as if it wasn’t already amazing, Kristen Wiig comes out.  She is charming and funny and “real” in a way that made me love her even more, if that’s possible.  For instance, she was seriously freaked out that she was sitting next to Alanis Morissette and was as bowled over by her intelligence as the rest of the audience was.  At one point someone asked Kristen a question and Alanis jumped in and eloquently answered it and Kristen just sat there, gazing at Alanis with pure astonishment, and then said, “I never would’ve said any of those words, at least not together.”

All in all, a terrific night.

Of course this is the part where I have to share my Alanis Morissette story, which most of you have already heard but here it is again anyway.

Back in the late 1990s I worked for Maverick Records, Madonna’s record label, which featured Alanis Morissette.  It was a terrible, terrible place to work, filled with monstrous egos and a lot of horrible people in an industry that was trying desperately to hold on to a failing business model (it was just as music sharing on the Internet was taking over the world).

A few months before Alanis’ second album, “Supposed Former Infatuation Junkie,” came out, she showed up at our offices, left behind all of her handlers, took off her shoes, and then walked around and introduced herself to everyone that worked there.  And I mean everyone – from the mail room on up. She went up to everyone and said, “Hi, I’m Alanis, and I just wanted to thank you in advance for all the hard work you’re going to do for my record.  What’s your name and what do you do?”  It was the coolest thing I have ever seen a “celebrity” do and still is to this day.

Of course then there are the Madonna stories, but I’ll save those for another time. 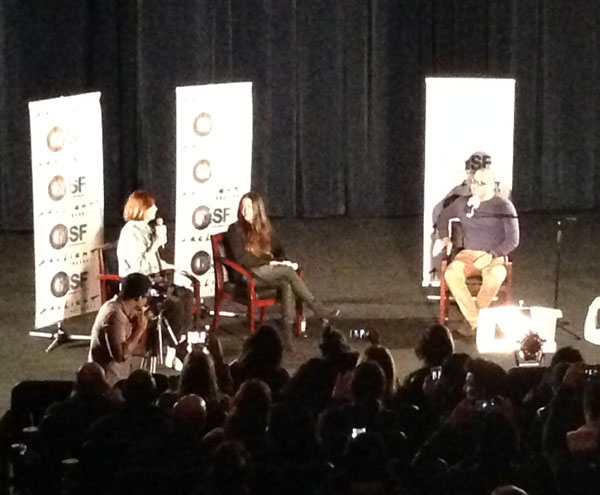 That’s Kristen Wiig, Alanis Morissette, and the moderator from the Modern School of Film.