Lately I have been obsessed with fruit smoothies – I have one almost every single morning, often from Jamba Juice.

Today, I got my medium Razzmatazz, paid for it, and then handed the clerk a $20 bill and one of the ROAK cards.  I told her to pay for the drink of the next person to come in the store and that whatever was left over should go in their tip jar.  She thought it was really cool and wanted to know where she could get some of the cards so she could do something herself.

FYI, I just did a google image search for “random acts of kindness cards” and then printed out one of what I found.  You can also lift the image from below, paste it into a word document a few times, and then print it.

To prove that random acts of kindness don’t have to involve money, I also did two other things today.  I went to the grocery store at lunch and there was a parking spot right in front, just steps from the door.  But instead of taking it, I parked a little further back so as to leave that space open for someone else to enjoy parking right next to the door.  Maybe it would be someone who needed it more than I did.

Lastly, as I was leaving work today, there was a woman carrying a large box into the parking garage.  I offered to carry it for her.  She wouldn’t let me, but I still count it as a random act of kindness, especially since it seemed that she was grateful that I had at least offered.

I have several Differentlies on the docket for tomorrow including meeting a new oncologist and going to the Falcon Theater for the first time, but am going to try to squeeze in a random act of kindness just to keep up the week’s theme. 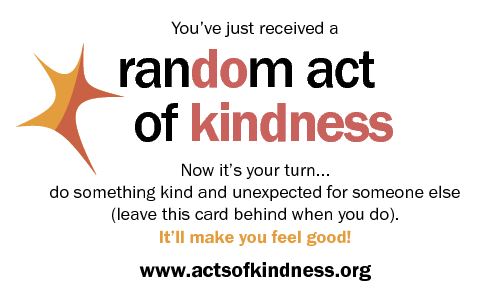