NOTE: this is a long, rambling post that winds up being a little sad.  You have been warned.

A lot of disparate things happened today that qualify for the Differently pile but they all seemed to be connected, in ways big and small, to cancer.  I wish the theme for the day had been unicorns riding rainbows through a field of sunflowers, but alas.

I started my day with a new oncologist.  My former – the guy I called Dr. Wile E. Coyote on my Year of Living with Cancer blog because his actual name sounded like a cartoon character – left the practice he had been with and moved to Pasadena and I’m just too lazy to schlep that far.  So instead I transferred to a different doctor in the same group and today was my first meeting with him.

Dr. Wile E. Coyote was great, but his office staff was always a bit frantic; like they had too much to do and were freaked out about it.  The new doc’s support staff was obviously busy but were friendly and joking around with me and the other patients, giving people high-fives and hugs.  It was a nice change of pace.

As was the fact that I got there at 10:15 for a 10:30 appointment and barely had a chance to sit down in the waiting room when they took me to an exam room, did the weight/blood pressure/temperature stuff, and had me ready for when the new doctor walked in at 10:30 on the nose.  I’m not naive enough to believe that will ever happen again but it has never happened EVER before at any doctor’s office so I’m impressed already.

I’m going to call the new guy Dr. Kangaroo, because he reminded me a bit of the Captain of the same name only without the mustache or the bowl haircut.  It’s weird where my mind goes but I have learned to accept it and move on and I think you should also.

Anyway, I really liked this guy – he had read my chart, asked all the right questions, wanted to know my opinion on things, was concerned about both my physical and mental well-being, and just generally seemed like a nice man.  I’m a fan.

I wasn’t a huge fan of what he said, which involved the word “indeterminate.”  When you’re having a check-in with your oncologist, or any doctor really, what you want is “everything is fine, grand, great, and rosy and it was practically a waste of everyone’s time that you even had to come here today.  Your unicorn is parked out front.”  Instead what I got was “indeterminate.”

Every four months I have to get check-ups to make sure that nothing has gone awry with the whole “remission” thing.  I get a variety of tests including some blood work, x-rays, and a few others.  This time some of the results came back as “indeterminate,” which is to say that there is nothing specifically wrong but it also isn’t fine, grand, great, and rosy – or at least they are unable to definitely say so.  In other words, no unicorns for me, yet.

This most likely means nothing.  Dr. Kangaroo and I both firmly believe that it’s a blip but we have to make sure so I have to go in for some more tests including a PET scan.  That’s the one where I have to get radioactive and lay in a tube for a really long time.  This is all being done out of an overabundance of caution and I’m sure it’ll all be fine so nothing to worry about.  I don’t have a date for the test yet but it will probably be late next week or early the following, right before I go to Vegas to watch The Academy Awards with a bunch of friends.

The weirdness of all this is that it was exactly one year ago that I had another set of tests that came back indeterminate and then had to go get a PET scan right before I went to Vegas to watch The Academy Awards with a bunch of friends. That PET scan didn’t turn out well, so while I’m certain that it’s all fine this time, to say I’m not just a little spooked would be a lie.

Anyway, as I left the doctor’s office I went to stand in line to pay for parking and there was an older woman in front of me.  I don’t know that she had cancer – there are lots of doctor’s offices in the complex that is served by this garage – but since the Roy and Patricia Disney Cancer Center (where my oncologist is located) is there, I figured it was at least possible.  I needed something to make myself feel better after “indeterminate” and so I said, “Excuse me, Ma’am?  This is Random Acts of Kindness Week so I’d like to pay for your parking.”

She looked at me, stunned, and said, “Really?  You have no idea!  I left my purse at home and was standing here not knowing if I was going to have enough change to pay for parking.”  Turns out, she only had about $3 and the charge was $5.  Weird how the world works, huh?

The woman, the person working the register, and the guy behind me who heard the whole thing were all kind of gobsmacked by this random act and it made me realize that we just don’t expect kindness in our lives.  We usually expect everything to be a hassle and for people to be dicks and often it is and they are, but sometimes kindness exists even if we have to make it so ourselves.  I have to say that afterward I felt better and there was no “indeterminate” about it.

The last bit of cancer-related Differently I partook in was going to The Falcon Theater in Burbank (for the first time) with my friend Maureen to see “Bunny, Bunny,” a play by Alan Zweibel about his friendship with Gilda Radner.

I have a deep connection with Gilda that is related to my friend Mary In fact, in a way, Gilda is the reason that Mary and I met.

I was working in the mail room of a big talent agency in 1989 and I had a bunch of things on the wall above my desk including a copy of a “Bloom County” cartoon.  It was this: 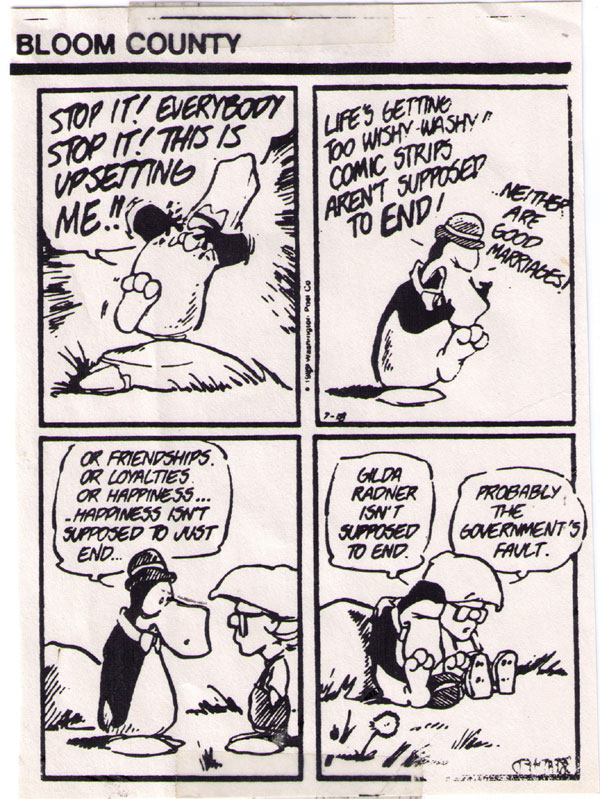 Mary, who was working upstairs at the same talent agency, loved Bloom County and Gilda Radner.  She saw it over my desk one day when she swung through the mail room and she stopped to talk to me about it.

Flash forward about 20 years.  I was getting ready to move and was cleaning out the clutter I had accumulated since I had lived in that particular apartment (about 14 years) and stumbled upon the cartoon strip – THE cartoon strip.  The one I had hanging over my desk.  I put it in a frame and gave it to Mary.  She told me that it was the best gift anyone had ever given her and she liked to carry it around with her, holding it tightly.

Flash forward another few months.  It was about two in the morning and her husband Steve took a break while I sat with her, quietly at first.  It had been hours since she was responsive in any meaningful way, although occasionally she would seem to respond to direct questions by trying to move her body or with noises as if she wanted to say something but couldn’t.  Whether this is true or not – whether she really was cognizant of her surroundings – is probably up for debate and yet not worth debating.

Although others were talking to her, I really hadn’t been all that much.  For some reason just being in the room… being with her was enough.  And on top of that I really couldn’t think of anything all that interesting to say.

But this time I managed to find my voice.

“This sucks,” I said as I sat next to her bed.  “I mean really sucks.  But you know it’s okay, right?  It’s okay that you go.  I mean it’s not okay.  It’s about as far from okay as you can get, but it’s okay.  And I’m going to be okay, too.  I know you were worried that I wouldn’t be, but I will be.  Okay might look different than it does now, but I’ll be okay.  I’m saying okay a lot, aren’t I?  I promise if I ever write this as a movie script or a book I’ll make this much more intelligent.”

I was quiet for a moment.  So was she.

She hadn’t moved or done anything in the entire time I was in there but as soon as I asked that question, she made a noise, like a low moan, and struggled a bit.

She calmed down.  Like I said, debatable.  But not worth debating.

“Bunny, Bunny” is not a great play.  It’s disjointed and a bit frenetic at times and the actors are good but not fantastic.  Having said that, the second act, as Gilda is diagnosed with cancer, has some really lovely moments in it including what I think is the best line of the play, almost at the end: “She’s been dead for years, but I’m still not ready for her to die.”

It’ll be four years this Sunday since Mary died.  I’m still not ready.  That, my friends, will never be Different.