I have been working on a novel – an epic, really – that I’ll tell you more about later, but the important thing about it as it relates to The Year of Living Differently is that I learned, today, about Savannah, Georgia’s squares.

A big chunk of the book takes place in Savannah, a city I consider to be one of the most beautiful in the world.  I’ve been twice, most memorably on one of the Plucky Survivors trips with Mary in 2008.  We stayed at a beautiful inn overlooking Reynolds Square and walked around the city (in the stifling humidity and heat) and saw a bunch of others, but I never really knew all that much about them.  As research for the book, now I do.

Savannah was built through the 1700 and 1800s around a series of park squares; 24 of them to be exact. Each one is different. Some are blocks long and wide, others barely postage stamp in size.  Some have monuments or fountains, while others are simply lawns and trees.  Some are more famous than others for one reason or another.  Monterey Square, for example, was where you can find Mercer House, once owned by the singer Johnny Mercer and later the home made infamous as a murder scene by the book and movie “Midnight in the Garden of Good and Evil.” Another, Chippewa Square, is also known as “Forest Gump Square,” since that movie’s bus stop bench scenes were filmed there.  One is even a graveyard, of sorts.  Wright Square is the final resting place of Tomochichi, the Indian chief who welcomed the first colonists to the area.

Of the 24 original squares, 22 of them still exist in what is known as the Landmark Historic District.  Three were lost to urban development but one, Ellis Square, was rebuilt with a modern sensibility (a parking garage rests beneath it).

After my research I have picked a favorite square – the one on which my main character lives – Troup Square.  It is located several blocks south of the main business district and the Savanah River on the eastern side of the historic district.  It was one of the last squares laid out, having been built in 1851.  It isn’t the biggest or most beautiful square – I think the latter prize goes to Whitfield Square a few blocks away, which has a charming gazebo in the center.  But Troup is the most interesting for a bunch of reasons.

First, it has a dog fountain.  Originally installed as a drinking fountain for people in Forsyth Park, a large green expanse in the Historic Victorian District a few blocks to the south, it was later moved to Troup Square and lowered so dogs could use it.  An annual “blessing of the animals” is held every October, turning the already pet-friendly square into a virtual house-pet zoo.

But second, and more important at least to my novel, is the armillary.  Installed with the park when it was built, the globe-like sculpture was designed as a model of the celestial spheres, the arcs on which various planetary objects and the sun moved around earth.  A lance through the middle, with a starburst on one end and an arrowhead on the other, is surrounded by several rings including one that has the various signs of the zodiac on one side (the Crab for cancer and the ram for Aries for example) and Roman numerals representing the months of the year on the other.  The whole thing sits on a base supported by six turtle figurines.

The exact meaning of all of this is apparently lost to time but I’m choosing to believe that it’s more than just a sculpture; it’s a guidepost of sorts – a map of the universe.  When you read the book (presuming I ever finish it), you’ll understand why this is important and why it’s cool bit of synergy that I hadn’t expected to find.  I love it when a plan comes together.

Who wants to go to Savannah with me to see it in person? 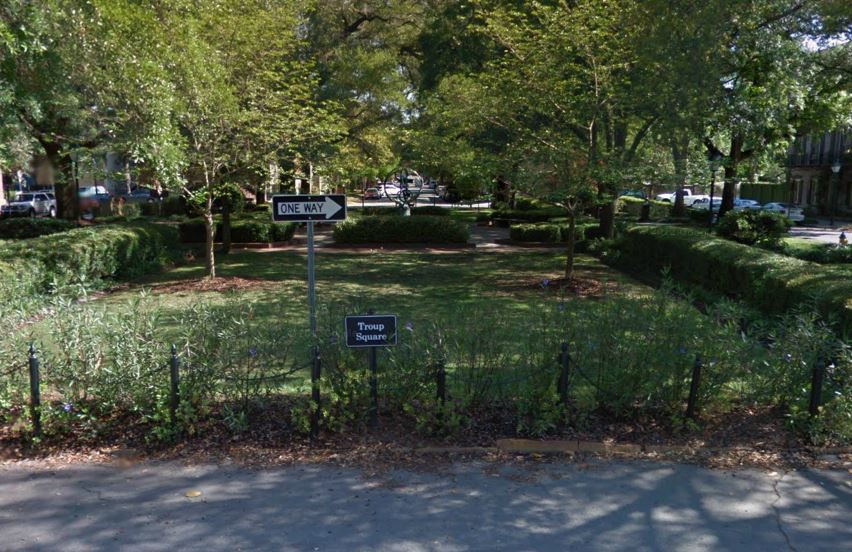 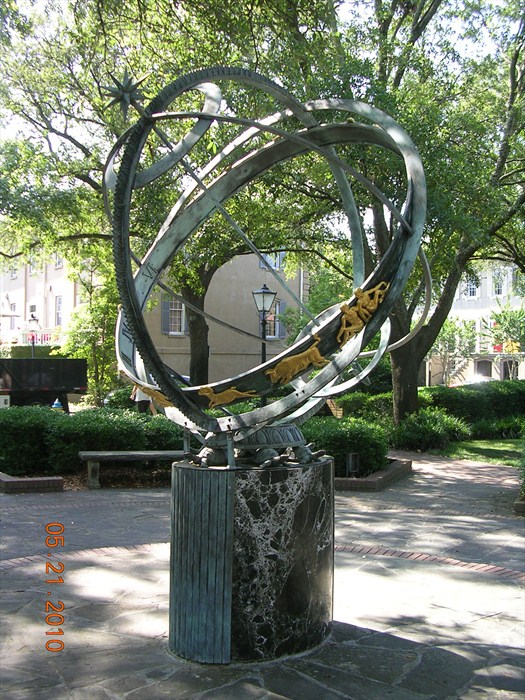