I freely admit that I’m whiffing a bit on my Differently for today.  I’m still not feeling great from the whole shingle catastrophe and it was a perfect, lazy Sunday to do absolutely nothing.

But I did work on my weekly Vegas column this morning (my 656th over the last 15 years!!) and came up with a fun new way to look at Vegas – by assigning a “winner” of a best hotel, restaurants, bar/nightclub, attraction, shop/store, or show to each letter of the alphabet in literal Vegas A-to-Z.  After 656 columns, it’s hard to come up with new, different, original stuff so I’m going to use this for my Differently today (so there, nyah).  The full piece is over here on Vegas4Visitors.com but here’s the short version:

A – Absinthe
There is lots of competition here including the fabulous Alizé restaurant, the fun and informative Atomic Testing Museum, and the wonderful Aria hotel but I’m going to have to give A to this gleefully profane skewed take on Cirque du Soleil style theatrics that remains one of my favorite shows in town.

B – Bartolotta
I considered giving B to Bellagio, Blazing 7 Slot Machines, or even the Bonanza Gift Shop but in the end had to go with the most amazing Bartolotta and its deliriously fresh Mediterranean specialties.

C – The Cosmopolitan of Las Vegas
Contenders here included Clint Holmes, Caesars Palace, and a trio of C-capped restaurants including Citizens Kitchen, Culinary Dropout, and The Cupcakery but The Cosmo takes the letter for its hip and fun updating of what a Las Vegas casino/hotel can be like.

D – Downtown Container Park
This terrific new addition to Downtown Las Vegas features shopping, dining, drinking, and a fire breathing praying mantis. That combo helped it beat out the worth options of The Downtown Grand and the Discovery Children’s Museum.

E – Eat Downtown Las Vegas
It’s the beignets, really, that made me tip the E to this wonderful little Downtown Vegas eatery over strong competition including Encore, Emergency Arts, and Exotics Racing.

F – Fountains of Bellagio
You can never go wrong with the iconic water show at the Bellagio, although I’ll admit it was a tough choice considering the other possibilities. First Friday, the Fremont Street Experience, Fleur restaurant, or the Forum Shops would have made good representatives for the letter F.

G – Green Valley Ranch
I enjoy the Grand Canal Shoppes and think the Golden Nugget is one of Downtown’s best hotels. Plus Gilley’s, on the Vegas Strip at Treasure Island, is still a fun place for a rootin’ tootin’ good time. But this one was really no contest – G belongs to Green Valley Ranch, one of the best locals’ hotel-casinos in town.

H – Hash House a Go Go
It’s possible that the High Roller Observation Wheel will steal the H after it opens but for now that letter is owned by the delicious, twisted farm food at Hash House.

I – Insert Coin(s)
Just because there isn’t a lot of competition for this letter doesn’t mean that Insert Coin(s) was somehow a lesser choice. This fun video game inspired bar and nightclub is one of the best in Downtown Las Vegas.

J – Jeff Civillico
The crazed antics in comic juggler Civillico’s show at The Quad will keep audiences of all ages entertained, from kids wowed by the stunts to adults appreciating his off kilter sense of humor. Other J options included JabbaWockeeZ at Luxor and the JW Marriott hotel.

K – KGB
The best burgers in Vegas are found here at Kerry Simon’s joint at Harrah’s. It’s hard to beat that although the eye-popping spectacle of KÀ by Cirque du Soleil certainly came close to doing so.

L – L’Atelier
This one was tough. In restaurants you’ve got Michael Morton’s Downtown “instant classic” La Comida and the Cajun wonders at Lola’s. In nightlife there’s the fun speakeasy concept of The Lady Silvia along with the Cirque du Soleil powered nightclub Light at Mandalay Bay. Plus, Le Rêve at Wynn Las Vegas is like Cirque’s darker, more visually arresting sister. All worthwhile considerations but there was no way, really, for me to do anything other than give L to L’Atelier, the mind-blowing (and mind-blowingly expensive) restaurant at MGM Grand. Eat here and you will remember it for the rest of your life.

M – Michael Jackson ONE
This was probably the hardest letter for me to choose a winner in. I mean, look at the list of competitors: Mac King, Mystére by Cirque du Soleil, Mesa Grill, Mon Ami Gabi, Mirage Dolphin Habitat, The Mob Museum, Megabucks slot machines… the list goes on and on. But I remain in awe of the music, artistry, and Cirque presentation of Michael Jackson ONE at Mandalay Bay and so had to give it the M.

O – Old Homestead Steakhouse
The easy choice would have been to give O to O by Cirque du Soleil. I mean, it’s right there – how obvious could it be? But I wound up going in a different direction, probably because I’m hungry as I write this. If you can afford it, there are no better steaks in town than found here at this temple to all things beef at Caesars Palace. An honorable mention has to go to the Oh My Gosh Ganache cupcake at The Cupcakery. Dessert, don’t you know.

P – Penn & Teller
There were some good challengers here in the form of the Pinball Hall of Fame and the new Kerry Simon eatery in Downtown Vegas called Pork & Beans, but P is for the princes of prestidigitation, Penn & Teller, whose show at The Rio continues to be one of the smartest in town.

Q – The Quad
Okay, this one was mostly because there is no other Q worthy of even mentioning that I could think of. But in its defense, you kind of have to tip your hat to the changes being made at the former Imperial Palace. The rooms still need a LOT of help, but the casino, restaurants, bars, and other main parts of the building have gotten some seriously nice upgrades and its worthy of a nod.

R – Red Rock Resort
I thought about the fantastic Japanese delights at Raku Grill (I’m hungry, remember?) and the fun throwback shopping found at Retro Vegas, but this locals’ resort takes the R-shaped cake for its combination of beautiful design, gorgeous rooms, and relatively affordable costs.

S – The Smith Center for the Performing Arts
It’s possible that SlotZilla will zip past the competition when it opens in the spring, but for now The Smith Center is owning S for its wonderful blend of world-class performing arts center and intimate local venues.

T – Todd’s Unique Dining
If you want gourmet quality food but don’t want to pay gourmet prices, get off The Strip to this out-of-the-way delight that serves up some of the finest cuisine in Vegas. Other options included Table 10, Todd English PUB, Top of the World, Toy Shack, and my favorite table game, Three Card Poker.

U – Ultimate Texas Hold ’em
This table game is a relatively low-stress way to introduce yourself to the world of Texas Hold ’em. Plus it’s the only U I could think of.

V – Vegas! The Show
I love this throwback revue at Planet Hollywood but I have to admit it was a tough choice given the wonderful, handmade concoctions at Vanguard Lounge.

W – Welcome to Fabulous Las Vegas Sign
Wynn Las Vegas would have been the obvious choice and of course you can’t deny the most popular slot machine ever with Wheel of Fortune, but the sign is iconic and nothing says Vegas (literally) better.

X – XS
Here’s another one where there wasn’t a lot of choice but it doesn’t mean this isn’t a great nightclub. Located at Encore, it’s one of the few that feels relatively grown up and remains one of the hottest in town.

Y – You
There wouldn’t be Vegas with you, so you – whoever you are – win this letter. And yes, it’s primarily because I couldn’t think of anything else that started with a Y. 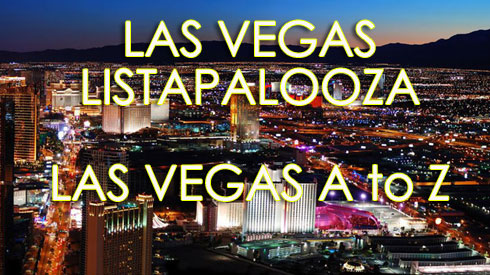