I wrote a TV pilot – I’ve actually written many, most of which have sat in the proverbial drawer and nothing has ever become of them – but this particular one was for a show called “The Life.” It’s a family drama about a woman’s journey with breast cancer inspired, a little bit, by my friend Mary’s experience. By that I don’t mean it was specifically about what happened to Mary but more that it was about the spirit and some of the lessons I learned during that – lessons that were reinforced when I got cancer later.

A big one is that life goes on. It doesn’t stop just because you get cancer. No matter how much I would have liked the world to change from orbiting around the sun to orbiting around me-me-me, the regular happenings of life – big, small, mundane, exciting, sad, happy, tragic, and otherwise – just keep on happening.

The other big lesson was that cancer doesn’t just happen to the person who has it, it happens to all the people around that person.

That’s what inspired the show: the idea that a person gets cancer but it isn’t the end of life or the beginning of a new life, it’s just “life.”

The pilot is called “Sideshow” and for the bulk of the episode you are immersed in the life of Jamie Harrington, a woman in her late thirties with a sweet but needy husband, two demanding kids, a pain-in-the-ass job, an ogre of a boss, a recently divorced mother, a screwed up brother, and a best friend in crisis. At the very beginning of the episode she mentions that she has to go in for a physical but then her brother’s relationship with a friend of hers implodes; her boss threatens to fire her unless she fixes a problem at work; she has to buy a birthday present for her difficult mom; her friend’s business and marriage are in jeopardy; her husband gets in a car accident; she backs her car into a pole; and on and on and on her life goes.

Then in the final scene she goes in for the physical and the doctor finds a lump in her breast. She delivers this monologue:

JAMIE
I remember when I was about eight, Dad took me to this carnival down at the fairground. One of those traveling things with rides that probably aren’t safe and animals that look like they are about ready to drop. I didn’t really want to go because they kind of scared me. The rides. It wasn’t about being scared to ride them it was more about… just the way these sort of big things loomed and hulked out over the fairground. Shaped like a giant octopus and a pirate ship. So I didn’t want to go but Dad insisted. “We’re going to have a fun family outing whether you like it or not!”(laughs)
So we get there and all the other kids were running from ride to ride and I wanted nothing to do with any of it until I saw the sideshows. This long row of bizarre attractions like the bearded lady and the three headed goat or whatever.
(beat)
I was wearing a blue dress. It’s weird what you remember.
(beat)
Anyway, I was there for hours. And I totally forgot about all the big scary rides because I spent the entire time just fascinated with the sideshows.
(beat)
I was too distracted by the sideshow to pay attention to the big scary stuff behind me.

My point is – and I swear I have one – that last week was one of sideshows for me. Shingles and way too much pain and too many painkillers and planning a trip to Vegas and trying to keep up with work and writing my Vegas site and writing a novel and binge watching House of Cards and Buffy the Vampire Slayer and on and on and on that I kind of forgot about the PET scan I had to examine the “indeterminate” results from the previous tests.

I got the results this morning.  There’s a spot in my left arm pit. It has grown since the last scan, but is still very, very small – only 11 millimeters. It is likely nothing serious and even if it is something serious it may very well have nothing to do with the last round of cancer. The problem is that according to my oncologist Dr. Kangaroo, it is too small to do anything about right now. They would not be able to get an effective sample to do a biopsy and if they just went in to cut it out there’s a chance they could miss it all together. You might remember that a year ago a similar thing happened with a single, very small spot and there was a very expensive, very painful surgery that couldn’t find the actual spot (or may have gotten unknowningly). The bottom line is that there’s just not enough information to figure out what is going on other than “something is going on.”

So Dr. Kangaroo is recommending waiting and repeating everything in about 8-10 weeks to see where we are at. If it has grown more, then we can do a biopsy and/or just go cut the little fucker out. If it hasn’t, then it is just a benign nothing and I can move on.

I’m not terribly happy with this strategy. Those who know me well know that patience is not exactly a strong suit and I have done entirely too much “waiting” with this crap over the last couple of years. It’s a wee bit stressful, which may be why crap happens like getting shingles. I may go schlep out to Pasadena to see Dr. Wile E. Coyote, my former oncologist, and see what he has to say about it.

But in the meantime I’m going to Vegas tomorrow through Monday so I will be doing a lot of Differentlies but postings on here may not be as daily.

After all, Vegas is the ultimate sideshow.

BTW, in case you’re interested and/or are a TV network executive and want to read The Life, here are the first three episodes: 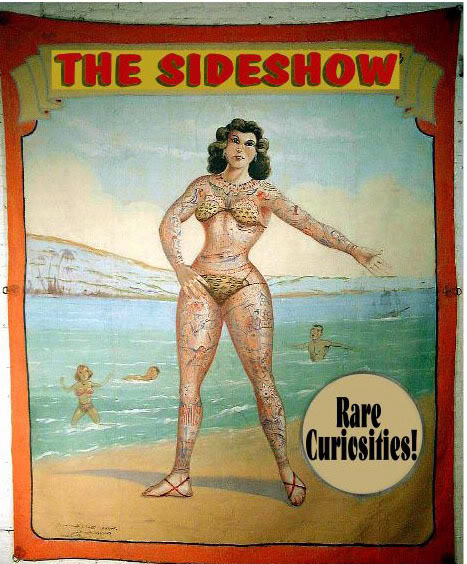