No, I didn’t run into my gastroenterologist at the all-you-can-eat buffet, but I did do a bunch of new stuff in Vegas today.

I got a tour of the new(ish) Downtown Grand hotel, which really impresses on a bunch of levels.  I’m declaring it the best hotel in Downtown Vegas right now and one of the best in town.  Amazing pool opening next week.

Ate at a restaurant at that hotel called The Commissary.  It’s a Latin kitchen, done as a sort of food court but with a funky, mismatched furniture thrift store meets cafeteria vibe.   The food was amazeballs – the Latin brisket, yum, and the Cubano torta with ham, slow-cooked pork carnitas, and cheese… love.

Got a tour of the Rock Camp in Vegas, which is where you can live out your inner rock star by jamming with famous musicians (the members of Judas Priest are in town this weekend), recording, and even performing at the House of Blues.  Fun.

Tonight had dinner at Triple George Grill, also Downtown, and was a little disappointed.  Buttermilk fried chicken but it was too heavy on the pepper.

Stopped at Fizz, the new champagne bar at Caesars Palace from Elton John’s husband David Furnish.  I’m so not a champagne person but I LOVED this place.  Intimate, grown-up, and a cocktail that mixed fresh strawberries,  fresh squeezed lemon juice, wild strawberry liquor, gin, and a touch of champagne.  It was one of the best drinks I’ve ever had in my life and I got to enjoy it in Elton John’s own VIP suite overlooking the club.  Swank!

Then finished off the night seeing The Jacksons at Planet Hollywood.  I was skeptical going in but I have to tell you it is one of the best, purely joyful celebrations of American music that I have seen.  I dare you to go listen to “Blame It On the Boogie,” “Don’t Stop ‘Til You Get Enough,” or “Shake Your Body” and not want to get up and dance.  They sound great, they dance their asses off (and they are not young men anymore) and just generally put on one hell of a show.

More Vegas-ing tomorrow including a car museum, a backstage tour, dinner and a show with friends from the East Coast, and rain all day Sin City according to the forecast.  Fun. 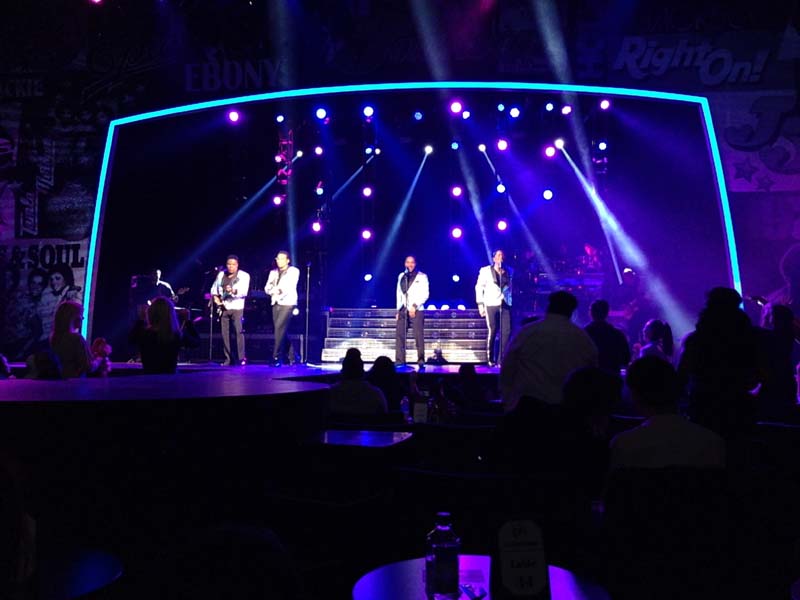