As I have often stated, I have the worst memory in the world.  I remember almost nothing specific about my childhood (except for the sucky things – those memories are still pretty vivid) and most of my young adulthood is a blur as well.  Of course the latter probably has something to do with all the… ahem… “fun” I had during that time period, but I even have a hard time remembering a few years ago.

I truly believe that my brain is like a computer hard drive and every time I learn something new, I have to erase something old.  Learn a new computer program?  Sorry, we’re going to have to delete 4th grade.

The point of all this is that I am sure I learned the basics about important things in our world when I was in school as a kid, but I don’t remember any of them.

Take the Bill of Rights.  I know a few of them – or at least I think I do.   The first and second are pretty well known.  Pleading the 5th; got it.  Oddly , I also know the 3rd, which has something to do with soldiers sleeping in your house during peace time.  And the 4th is about searching and seizing and privacy.  But after that, I’m out.

So today I went and read up on the Bill of Rights – the first 10 amendments to the Constitution of the United States of America.

2nd – We all know that this one is about, or rather how it is interpreted today, and I don’t want to debate about it so let’s just move on, shall we?

3rd – During a time of peace, the government can’t force you to house soldiers.  Apparently during a time of war, you should have the guest room ready.

4th – This one is about unreasonable searches and seizures, establishes the concept of a search warrant, and requires “probable cause.”

5th – It’s about more than just the “might incriminate myself” thing.  It also deals with the right of due process, established the concept of “double jeopardy” so you can’t be tried twice for the same crime, and set rules for grand jury indictments and eminent domain proceedings.

6th – More stuff about trials including the right to a speedy one, the right to face your accuser, to have a lawyer, and so on.

7th – This one says you can have a jury for a civil trial.

8th – There are a couple of small pieces to this about prohibiting excessive fines and bail, but the big part is prohibiting cruel and unusual treatment.

9th – This was written to basically say that just because a right isn’t listed in the “Bill of” doesn’t mean that people don’t have a right to it.  It has been used over time to limit government powers.

10th – This is sort of the opposite of the 9th in that it limits the government only to the powers that are listed in the constitution. 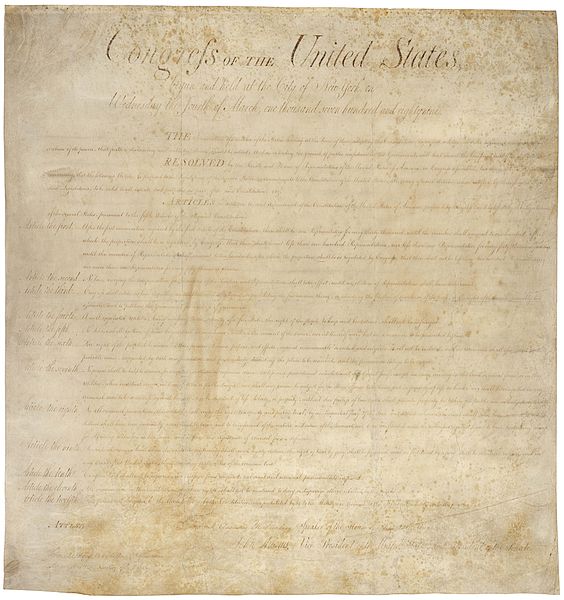