TYOLD Day 76: Shaking It Up

Many years ago I made a half-assed effort to create an earthquake kit. The timing is a little hazy, but I think it was not long after the Northridge quake when I had moved into my new apartment and felt like maybe having some supplies ready for when it happened again probably wouldn’t be a bad idea.

If I remember correctly I got some batteries, a pair of work gloves, a cheap flashlight, a lighter, a few bottles of water, some crackers, some single serving cups of applesauce, and a couple of cans of fruit cocktail. My biggest problem was the food – everything sounded gross – beans? Tuna? Ew. No. I’d rather starve.

I put it all in a bag and threw it in a closet and there it sat for years and years and years and the batteries drained and the water evaporated and the food spoiled and I took the work gloves and the flashlight out to use for something and never put them back and so if there had been an earthquake I would’ve been screwed.

So this morning there was an earthquake. It wasn’t a big one – 4.4. Usually I don’t get out of bed for anything less than a 5.0, but this one was felt pretty sharply in the San Fernando Valley where I live and so it definitely got me moving. I stood in the doorway and let it subside and then looked at the clock, realizing I still had 30 more minutes to get more sleep. I didn’t… I wound up watching various newscasts with reporters trying to come up with something interesting to say about something that didn’t actually do anything other than wake a bunch of people up.

But even though it was very small and relatively inconsequential, I decided that today was the day I would finally make a real effort at not one, but two earthquake kits – one for the apartment and one for the car. Here’s what I have put in mine:

I have a smaller version going in the car with much of the above plus a small fire extinguisher.

Okay disaster… I’m ready… but you can just trust me on it, you don’t have to make me prove it. 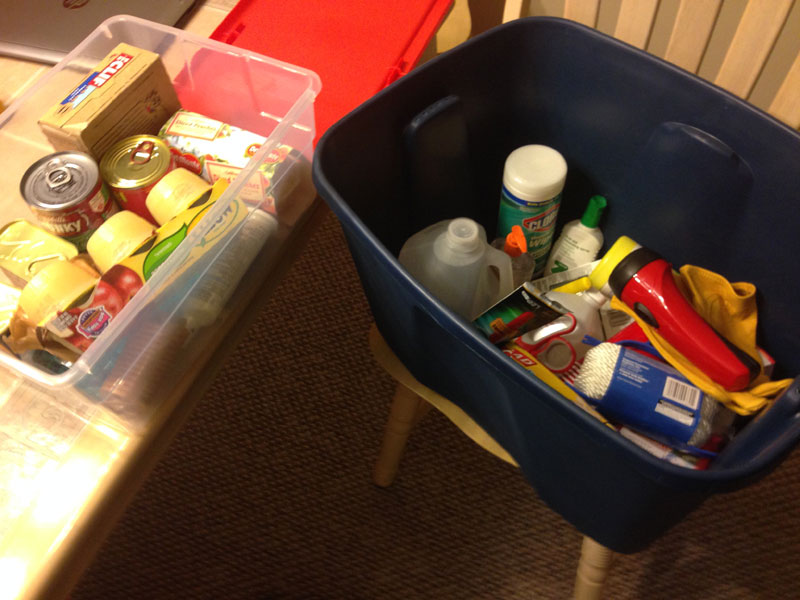