In the more than 16 years I have been writing about Las Vegas, I have seen every single magic trick, ever.  The big ones, the small ones, the good ones, the bad ones, the brainy ones, the stupid ones… I’ve seen them all.  Or at least it feels like it.  I have seen dozens of magic acts in Sin City from Siegfried & Roy (pre-White Tiger “incident”) to the Showgirls of Magic (topless chicks sawing each other in half).

I usually dislike big, dramatic, spectacle magic.  It’s what I call the “Whirling Blades of Death” style illusions that expect us to believe that there really is a chance that the performer is going to get chopped or minced or julienned or whatever happens if you get caught in them.  It bores me.

But I love up-close magic, especially a really good card trick.  So today, I learned two of them.

The first involves getting someone to randomly pick four cards from the deck with the goal of selecting four kings or four queens.  That doesn’t work, of course, but then you suggest that maybe they came close and reveal the cards next to the ones they chose, which are the four kings and the four queens.  It looks like this at the end: 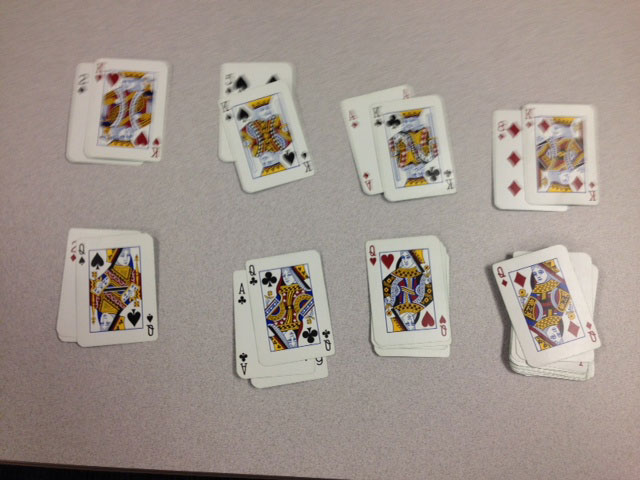 The second trick sets up a complex bit of random card selection that allows the person doing the trick to predict a specific card in the deck.

Both are really easy and yet pretty cool.  I did them for some people at work and they were suitably impressed.

Now, if I can just figure out how to get that damned white tiger to disappear.