For several years, my friend Mary and I went on road trips that we called Plucky Survivors See America.  We did four of them, first in 2006 through Louisiana, Mississippi, Arkansas, Missouri, Tennessee, and Alabama.  Next in 2007 we did the Midwest with Illinois, Iowa, Missouri, Kansas, Minnesota, and Wisconsin.  In 2008 we went back to the south with Georgia, South & North Carolina, Kentucky, West Virginia, and Tennessee.  Then finally in 2009 we did the mid-Atlantic, with Washington DC, Maryland, Pennsylvania, Ohio, and Virginia.

We did a bunch of amazing stuff – some silly and some serious – from visiting the Britney Spears Museum to the Civil Rights Museum and beyond.  At many of the stops I bought souvenirs – hats, magnets, geegaws, doodads, and other assorted junk but what I bought a lot of was t-shirts.  Of course I never wore any of them and they just took up space in my closet, until a couple of weeks ago when I had a brainstorm: turn them into a quilt.

I, of course, do not have the skill to be able to do something like that on my own so I Googled “quilt makers Los Angeles” and stumbled upon the San Fernando Valley Quilter’s Association (yes, there is such a thing).  I sent an email and they, in turn, sent an email to all of their members asking if anyone wanted to help me.  I got a ton of replies but one in particular caught my eye – it was from a woman named Julia and her email was @savethetatas.org.

For those who don’t know, the Save The Tatas Foundation is an organization devoted to raising awareness about breast cancer.  Turns out Julia, in addition to being a quilter, is also the president and founder of the organization.  Considering the fact that I did these trips with Mary and that her “plucky surviving” at the time was dealing with breast cancer, I thought this was something like serendipity.

Julia took 10 of my souvenir t-shirts and turned it into the most beautiful keepsake quilt.  Included are t-shirts from:

Hillbilly Hot Dogs in Lesage, West Virginia (bottom right)- a place we drove 100 miles, in the opposite direction of where we were going, just so we could have one of their famous hot dogs (well, several, really)

The National Civil Rights Museum, Memphis, Tennessee (bottom left) – the t-shirt reads “No Black, No White, Just Blues” in a nod to the impact of music on the civil rights movement.

The Hamburg-er Festival, Hamburg, Pennsylvania (center) – this is where I got to judge a chili cookoff and Mary got her picture taken with a guy in a giant hamburger costume

The Negro Baseball League Museum, Kansas City, Missouri (middle left) – an amazing facility even for people like me who don’t understand anything about sports

Souvenir Las Vegas shirt (on the other side, not shown) – we didn’t hit Vegas on our Plucky trips but we went there together often so I felt like it counted.

If you want read our about our Plucky Survivors See America trips, the website is still active at PluckySurvivors.com. 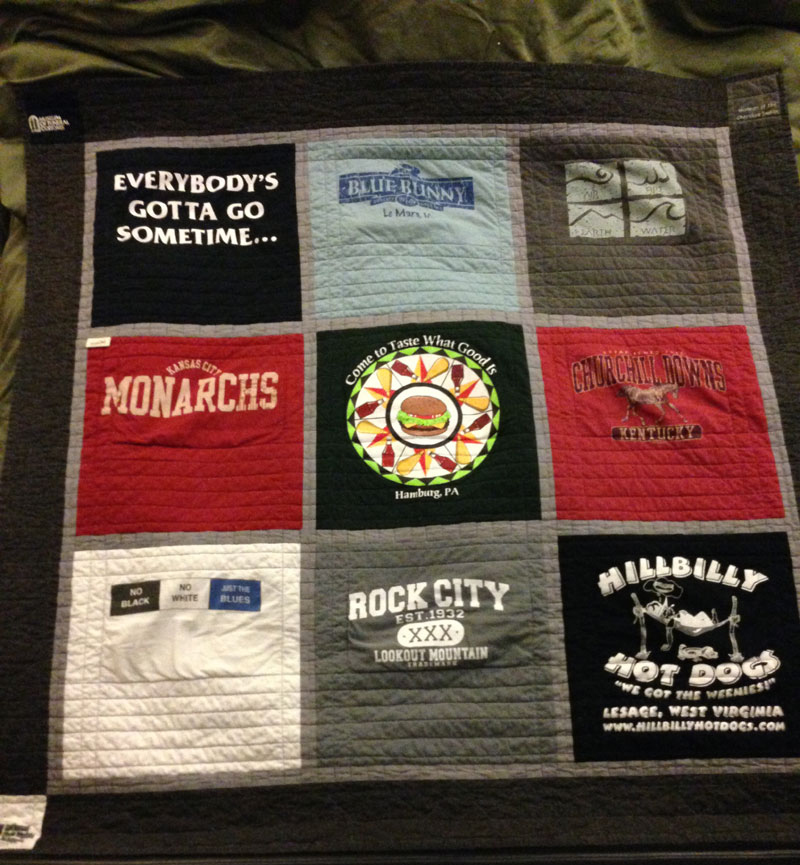