I was craving a cupcake today.  Okay, I crave cupcakes all the time, but I don’t always do anything about it.  Part of it is because I know if I had a cupcake every time I wanted a cupcake I’d weigh roughly the equivalent of a compact Japanese car, but beyond that I have to admit I’m a bit of a cupcake snob – it takes a lot to impress me – and so not just an old cupcake will do.

I have two favorite cupcake places, one here in LA and one in Vegas.  The LA one is Yummy Cupcakes, which started in Burbank but now has locations in Brentwood, San Diego, Pasadena, Michigan, and Istanbul.  Wait… what?  Huh… just looked at their website and yes, they have locations in Turkey, Qatar, and coming soon to Kuwait, Dubai, Abu Dhabi, Oman, Italy, Japan, the UK, and France.  Well, if anything could spread peace around the world it would be these cupcakes.

The other really good one is The Cupcakery, in Las Vegas.

And therein lies the title of my posting tonight.  I decided to try a new cupcake place but I’m inherently lazy so I needed it to be somewhere more or less on my way home.  I found a store called Velvet Cupcakes, which is at the Westfield Fashion Square mall in Sherman Oaks.  This should’ve been my first clue that it wasn’t going to be good – nothing good comes out of malls.  This is a particularly obnoxious one that I think I have been in maybe twice in the entire 30 years I have lived here and I live about 4 miles from it.  Horrible parking, boring stores, always crowded, blah.

So Velvet Cupcakes is a little store near the food court and they have a display case with about 7 flavors, all boring – chocolate, vanilla, vanilla-chocolate (black and white), red velvet, mocha, coconut, and something else that I can’t remember.  I got a chocolate and a black and white.

Beyond disappointing… I’m actually not going to finish the one I started.  And this is not a big cupcake (despite the $3.25 cost).   The cake is dry and has a funny taste to it – almost like weak bacon, which is weird on a variety of levels.  Not enough frosting and what there is is bland.

Guess I’m going to have to jump on a plane to Abu Dhabi this weekend. 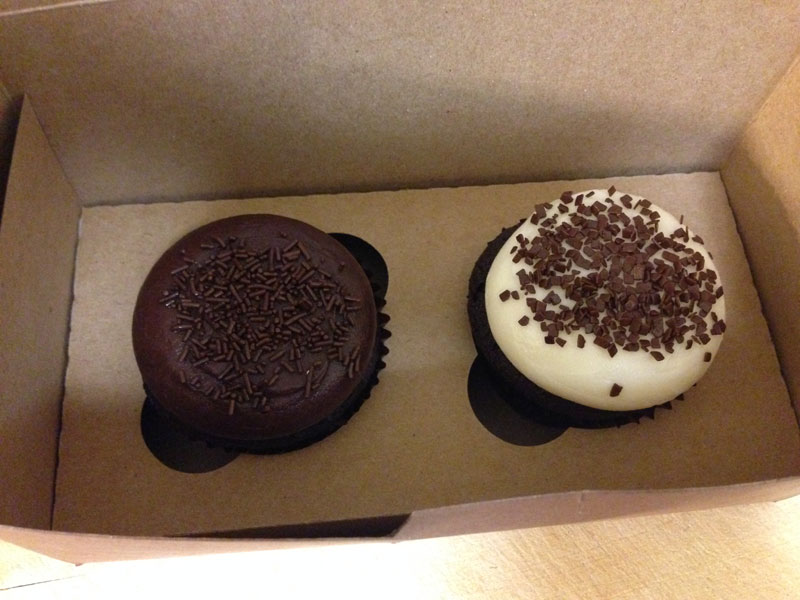